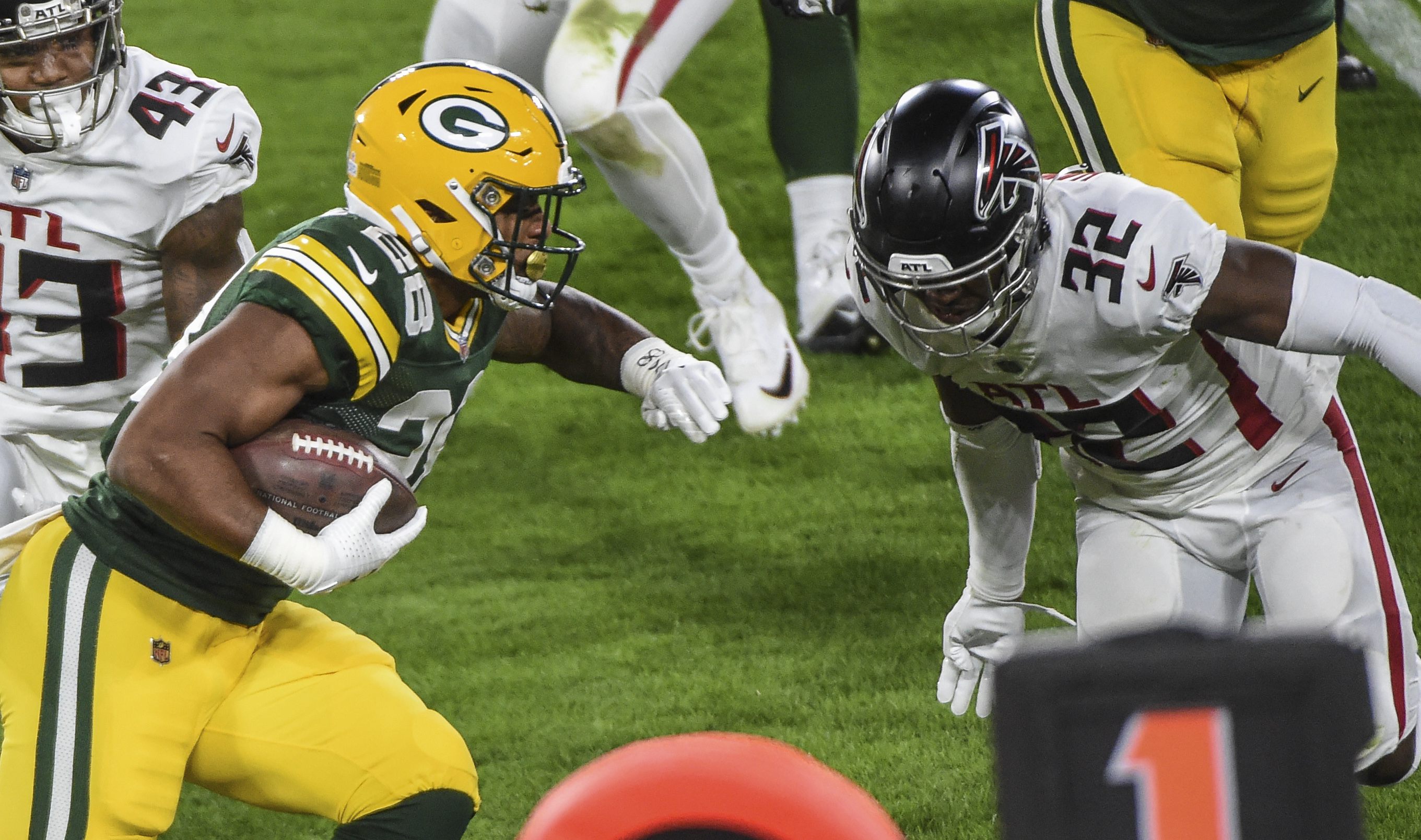 The Green Bay Packers head to San Francisco for a re-match with the 49ers Thursday night, but they may have to play the game without their top three running backs.

Earlier this week, Green Bay announced that rookie A.J. Dillon had tested positive for Covid-19 and was placed on the Covid-19 Reserve List. The team then added RB Jamaal Williams and ILB Kamal Martin to the Covid-19 list because they had close contact with Dillon. All three players have been officially ruled out for Thursday night’s game against San Francisco.

The Packers have been missing their starting running back, Aaron Jones, for the last two games. Jones suffered a calf injury a few days before the Packers win in Houston. He did not play against the Texans or the Vikings and was listed as a limited participant in practice both Monday and Tuesday on the Packers official team injury report.

If Jones is not ready to go Thursday night, that leaves the Packers without their top three running backs on their depth chart for a big game against the team that beat them twice last season including a thorough beating in the NFC Championship Game.

Because the Pack is playing on Thursday, there is not enough time to sign a street free agent and have the pass Covid-19 protocols before they face San Francisco.

So, what are the Packers options heading into this game? Here is a look at what to expect from the Packers lineup on Thursday if Jones is unable to play or if he’s only able to take limited snaps:

The Packers will almost certainly promote second-year man Dexter Williams to the active roster. The former Notre Dame star is the only running back presently available on the practice squad. He was activated for the game against Houston and did not take a snap on offense.

Teams can activate players from the practice squad for two games without having to permanently add them to the active roster so Williams can be activated before Thursday’s game without any difficulty. Even if Aaron Jones is available, expect the Pack to make this move to give them depth at the RB position.

Dexter Williams has a total of five NFL games played. He has rushed for 11 yards on five carries all of which came during the 2019 season.

The Green Bay coaching staff is not worried about Williams’ ability to run the football. He showed that he can be an effective runner throughout the 2019 preseason and in training camp. The problem for Dexter Williams in the NFL has been his inability to pass protect and his inconsistency in running pass routes.

These two facets of the game are vital in Matt LaFleur’s offense. So much of the system LaFleur wants to run relies on running different plays from identical formations. If the team needs to rely on a running back who cannot adequately pick up pass rushers in protection, that ability to keep defenses off-balance is severely compromised.

When we last saw Dexter Williams on the field, he played 15 snaps on special teams against the Texans. During that game, he gave a half-hearted effort on a punt that led to the kick being blocked by Houston. The lack of effort on that play was even more upsetting than the poor technique and the bad result.

If Williams is the Packers primary back, he will have to show he can pass protect adequately for the offense to be effective.

2. Use Tyler Ervin More at Running Back

Ervin is now considered a wide receiver by the Packers this season although he has experience playing running back and running gadget plays like the jet sweep. This year, he has four rushing attempts for 43 yards.

Ervin is also not considered a strong blocker. He is listed at 5’10”and 185 pounds which means he is giving away a lot of size and bulk when attempting to block blitzing defenders.

In addition, Ervin is coming off an injury of his own. He missed two games due to a wrist injury and didn’t return until the re-match with Minnesota last Sunday. In that game, he was on the field for 20 snaps.

Ervin is most effective as a return specialist but he only returned one punt last week against Minnesota and that came in the fourth quarter when the Packers were behind and desperate for a boost to get the tying drive going.

It is not clear how much the Packers can count on Ervin as a runner but look for him to catch passes out of the backfield and to run a bit more often than he usually does over the course of a typical game on Thursday.

The Packers will also likely move tight end/H-back John Lovett to fullback or even have him take some snaps at running back.

Lovett is a more reliable blocker than either of the two previous candidates. He has been on the field for 34 offensive snaps total through seven games thus far this season. The former college quarterback can play running back, tight end or H-back and will likely see action at all three positions over the course of the game Thursday night.

The Princeton alum has yet to carry the football or catch a pass for the Packers this season, but he stands a much better chance of being more involved in the offense this week out of necessity.

4. Use Marcedes Lewis and Jace Sternberger as H-Backs

Another alternative for the Packers is to utilize tight ends Marcedes Lewis and Jace Sternberger as fullbacks or H-backs. This can help protect Aaron Rodgers and give him a receiving option.

If Ervin or Dexter Williams are also on the field, this can still keep the defense guessing as Lewis and Sternberger can be kept in to block on passing plays or go out into the pattern. They may also be solid receiving options out of the backfield or carry the football once or twice just to create confusion and take the defense by surprise.

These are the present options for the Packers at running back if Aaron Jones is unable to go or is limited on Thursday. No doubt, Matt LaFleur will have to be creative in his play calling if he has to face San Francisco without his top three backs.