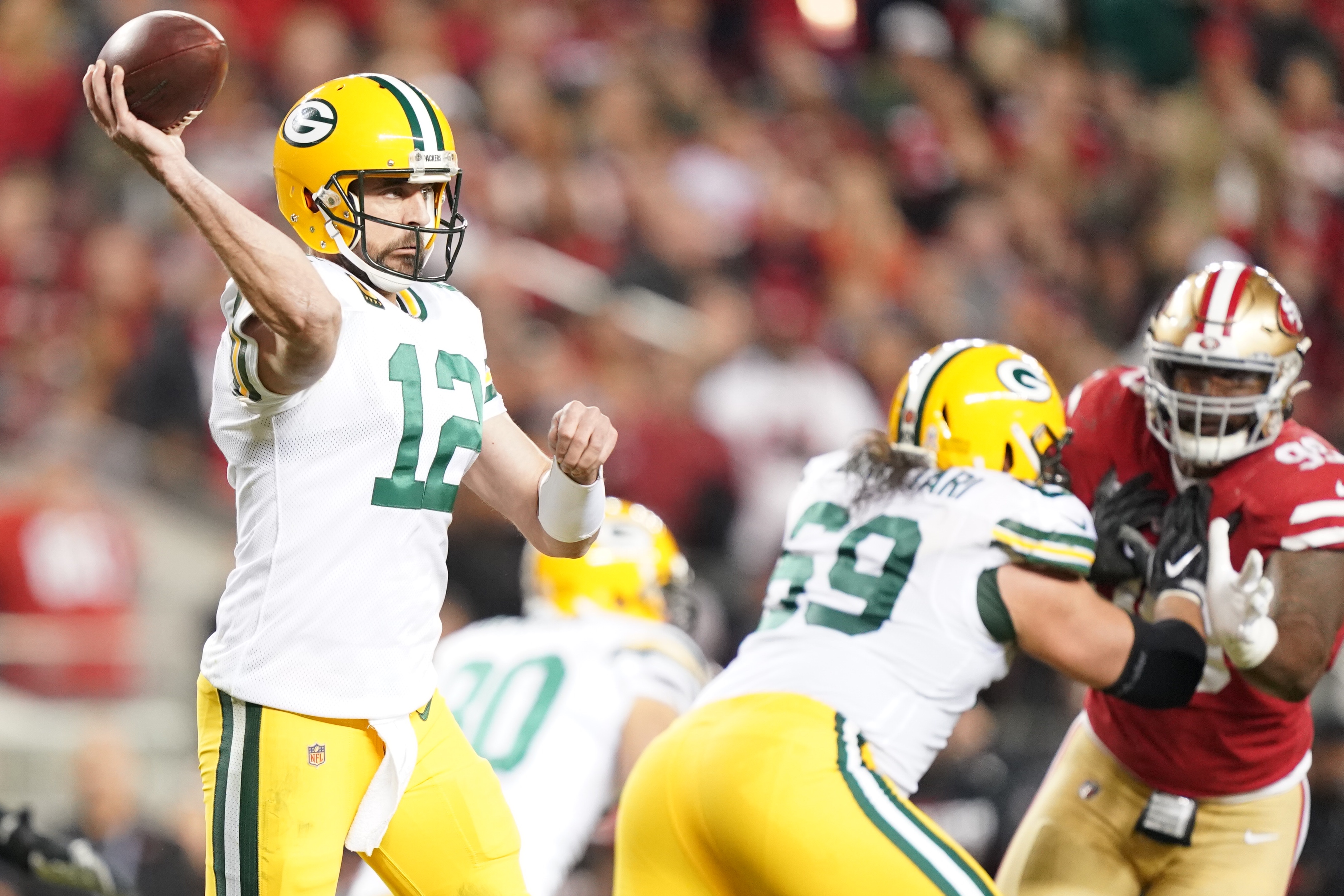 The Green Bay Packers are heading to California to take on the San Francisco 49ers in a re-match of last year’s NFC Championship Game. The Packers are 5-2 after suffering a 28-22 loss to the Minnesota Vikings last Sunday. The 49ers are 4-4 and are coming off a 37-27 loss to the Seattle Seahawks.

Both teams are shorthanded this week because of injuries and positive Covid-19 tests. The Packers had RB A.J. Dillon test positive and RB Jamaal Williams and ILB Kamal Martin were ruled out because they were in close contact with Dillon.

On Wednesday, the 49ers announced that wide receiver Kendrick Bourne tested positive for Covid-19 and he will be kept out of the game. The 49ers shut down their facility and it is still not clear how many other players may need to be added to the Covid-19 reserve list.

Both teams are also dealing with numerous injuries which will be discussed throughout this article.

Green Bay leads the all-time series between these two teams 32-28-1 although San Francisco won both meetings last year, one during the regular season and one in the playoffs. The teams have split eight playoff games.

Here is a look at six key factors that will determine who wins Thursday night’s game:

The good news for the Packers is that the 49ers will be without running backs Tevin Coleman and Raheem Mostert. It was Mostert who had a career day against the Packers in the NFC title game last January.

The 49ers will likely go with a combination of Jerick McKinnon and JaMycal Hasty. Both players are averaging more than 4.1-yards per carry. Both are also small backs, standing 5’9” and relying on speed and elusiveness.

The bad news for the Packers is that they continue to struggle to stop the run. Dalvin Cook dominated the Packers defense last week and the Packers knew that Cook would be the focal point of the Vikings attack. They still couldn’t stop him.

The Packers are without Kamal Martin who is on the Covid-19 reserve list. They need players like Krys Barnes, Kenny Clark and Tyler Lancaster to step up and help slow down the San Francisco ground game to prevent a similar result from the last two times the Pack traveled to San Francisco.

They also need to tackle better across the board and need to keep contain on running plays and drastically reduce the number of missed tackles they commit.

2. Get Pressure on Nick Mullens

The Packers defense has struggled all season to get pressure on opposing quarterbacks. With the exception of Za’Darius Smith, the team has not been able to consistently get quarterbacks out of their comfort zone.

The 49ers will be without starting quarterback Jimmy Garoppolo who suffered an ankle injury last week and will miss several games. That means the Niners will turn to backup Nick Mullens who has already appeared in four games this season. Mullens is accurate, having completed 70.4 percent of his passes. His arm strength is not outstanding and he often has trouble getting the ball deep down the field or on out patterns.

The Packers will need to get some pressure on Mullens which should force him into mistakes and reduce his ability to find secondary receivers.

The Packers need more pass rush from Kenny Clark and Kingsley Keke inside and from Preston Smith and Rashan Gary on the outside to pressure Mullens enough to rattle him.

The Packers may be without their top three running backs on Thursday. A.J. Dillon and Jamaal Williams are on the Covid-19 reserve list and will miss the game. Starter Aaron Jones has missed the last two games due to a calf injury. He is officially listed as questionable and will be a game time decision.

If Jones can’t go, the Packers will have to turn to a combination of Tyler Ervin, Dexter Williams and John Lovett in the backfield. They are short on experience carrying the ball and perhaps more importantly, are not proven pass blockers or (with the exception of Ervin) route runners.

The Packers will need to still run the ball enough to keep the San Francisco defense honest and they’ll need to be able to continue to practice deception by making their play action pass game work. If the Pack cannot do this, their offense will be compromised and that could spell trouble.

4. Spread the Ball Around on Offense

The Packers passing game was out of rhythm last week against Minnesota, in part due to the windy weather conditions which prevented Aaron Rodgers from throwing the ball down the field.

The Packers offense focused a lot on Davante Adams last week but they were unable to consistently get him open except inside the 10-yard line. While they obviously need to get Adams involved in the offense, Matt LaFleur also needs to have secondary targets to throw to.

The Packers have not gotten much from their secondary wide receivers since Allen Lazard was hurt after the win in New Orleans. Both Marquez Valdes-Scantling and Equanimeous St. Brown have struggled to get open in recent weeks and are rarely targeted. Darrius Shepherd and Malik Taylor usually make one catch per game. The Packers need more from these receivers until Lazard is healthy enough to return to the lineup.

It is more likely the Packers will rely heavily on their tight ends, especially if Jones is unable to play or is limited. Robert Tonyan and Jace Sternberger both did well last week and will likely be counted on even more this week.

Ervin may also be more involved in the passing game if he and Dexter Williams are the two running backs playing this week.

San Francisco is also hurting at the wide receiver and tight end. Starting TE George Kittle is a dangerous weapon but he won’t play because of a foot injury. That is a big loss for the 49ers. The Packers are thin at safety with backups Vernon Scott and Will Redmond both out with shoulder injuries and Raven Greene questionable with an oblique injury.

The home team will also be without WRs Deebo Samuel, Chris Thompson and Jalen Hurd. The Niners most dangerous remaining target will likely be rookie Brandon Aiyuk who the Packers must contain. Look for Jaire Alexander to be matchup up with Aiyuk for much of the game in what should be an interesting battle.

The Packers will also be without Kevin King again which means the Packers will again be counting on Josh Jackson to step up and play well. So far this season, the results from Jackson have been mixed.

The Packers must contain Aiyuk and prevent the Niners offense from moving the ball consistently through the air, especially on third downs.

Rodgers has been sacked eight times in seven games which is even more impressive when you consider the number of injuries the Packers have suffered along their offensive line this season.

Starting left tackle David Bakhtiari is still listed as questionable with a chest injury. The Pack have missed their Pro Bowl starter over the past two games.

If Bakhtiari can’t go, the Packers depth will be severely tested because backup Rick Wagner is listed as questionable with a knee injury. Would the Packers move Elgton Jenkins to tackle if neither Bakhtiari nor Wagner can go?

Rodgers needs time to throw. The 49ers have only 14 sacks through eight games in part due to trades and injuries hurting their defensive line. Their best pass rusher this season has been Kerry Hyder who has 4.5 sacks. The Packers must contain him.

If Rodgers has time to throw, he should be able to keep the chains moving for the Packers.

The Packers have lost two of their last three games and cannot afford to lose a third. The 49ers are even more banged up than the Packers are so the timing is good. In fact, San Francisco has so many injuries that none of the skill players who handled the football in the NFC Championship Game will be on the field for this game on Thursday.

The Packers defense needs to step up and slow down a San Francisco offense that is playing a lot of backups. If Rodgers can lead the offense to 28 points, that should be enough to outscore the 49ers.

The defense needs to step up and create some turnovers to help put the game away. If Green Bay wins the turnover battle, they should win the game.

The Packers haven’t played two horrible games in a row under LaFleur and that trend should continue.