Grading the Packers Offense Over the First Half of the Season 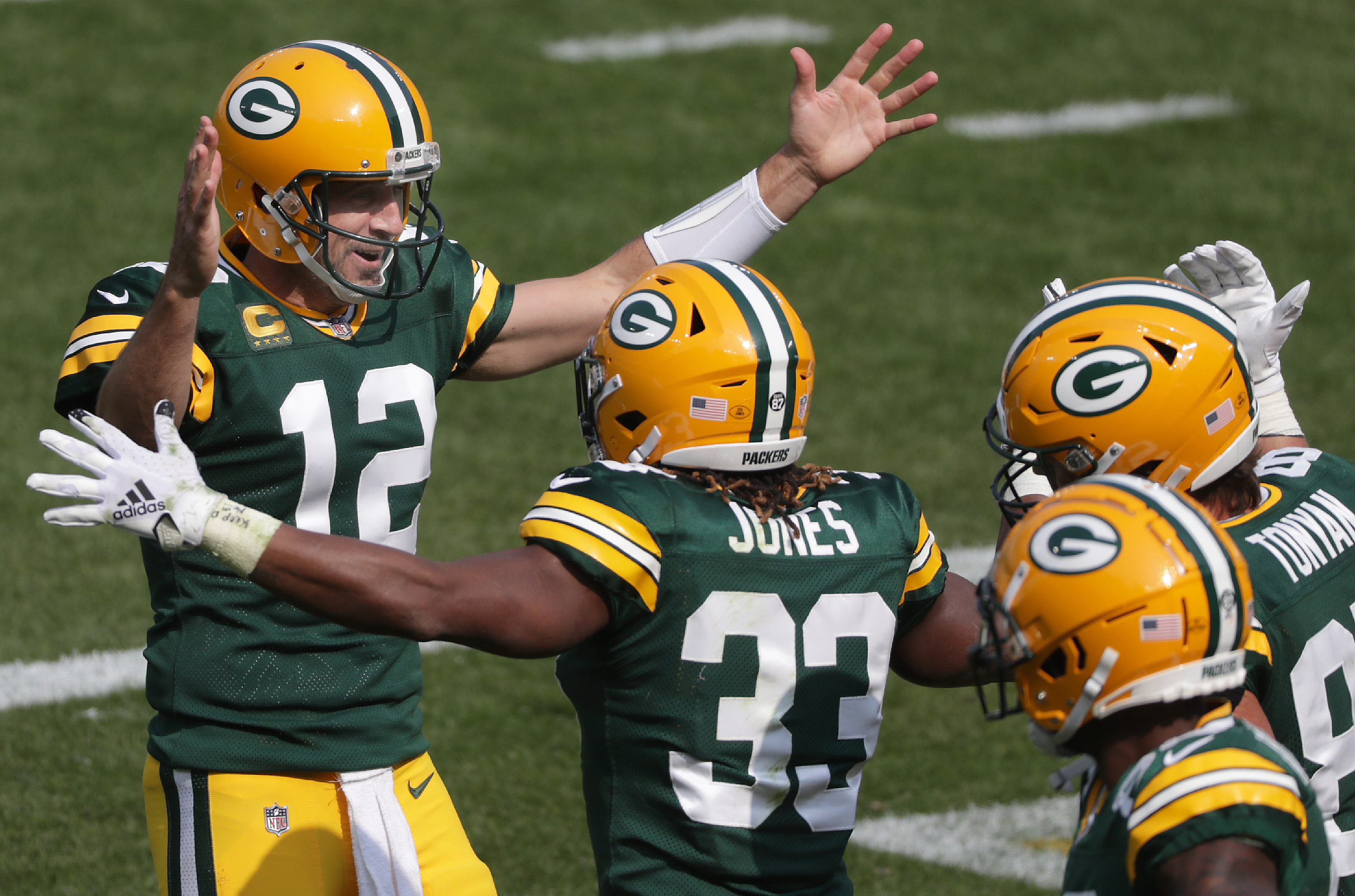 Grading the Packers Offense Over the First Half of the Season

The Packers have reached the halfway mark of the 2020 NFL season and they are presently in first place in the NFC North with a 6-2 record. The offense has been dominant for seven of the team’s first eight games so far while the defense’s performance has been inconsistent much of the time.

Here is a look at the Packers offense through the first half of the season. Grades are given to each position group with individual players discussed as part of the position analysis.

Aaron Rodgers is playing at an MVP level again and is enjoying his best season since 2014 or perhaps even 2011. It’s possible the Packers decision to draft Jordan Love in the first round provided Rodgers with additional motivation to show he was still one of the best quarterbacks in football.

The game seems fun again for the Packers quarterback and he seems much more comfortable with Matt LaFleur’s system and is in control of the offense even when he has limited weapons to work with.

Rodgers has 24 touchdown passes and just two interceptions which puts him on pace for 48 TDs for the season. He is completing 67.5 percent of his passes and has a quarterback rating of 117.5.

Tim Boyle has played in six games and specializes in the victory formation kneel downs to close out games.

Overall, Rodgers is playing at an elite level and has been one of the best players in the league this season.

The Packers are talented and deep at this position and it has paid off thus far. Aaron Jones has missed more than two games due to injury but is still on pace for more than 1,000 yards rushing if he plays in the remaining games of the season.

Jones is quick, smart and a hard worker. He is averaging 5.0-yards per carry and has rushed for 447 yards and five touchdowns. He is also a reliable and dangerous outlet receiver for Rodgers and is tied for third on the team with 23 catches for 182 yards and two more scores.

Jamaal Williams is one of the most popular players in the locker room and good enough to start for many NFL teams. Williams is the Packers best pass blocking and receiving back and is a tough, determined inside runner. Williams is averaging 4.3-yards per rush and has gained 294 yards while missing one game. He also has 23 catches for 183 yards.

Rookie A.J. Dillon has only 23 carries, mostly because he needs to improve his pass blocking and route running and because of the talent and experience in front of him. Dillon is a load and has shows flashes of the ability that made him a second-round pick this season. Expect him to get more carries in the second half of the year if he shows he can pass protect adequately.

Tyler Ervin plays both running back and receiver. He has 12 carries for 67 yards mostly on jet sweeps and draw plays. He has added 10 catches for 81 yards. Ervin’s speed and elusiveness makes him dangerous any time he gets the ball in space. He is a good role player but his lack of size limits him as a primary running back.

John Lovett has seen some time at fullback and got a few carries late in the win over San Francisco. His blocking has been solid thus far. Dexter Williams got injured after carrying twice against the Niners. He needs to improve his blocking and route running if he hopes to carve out a role on offense in the future.

This grade is mixed because of the large disparity between Davante Adams and everybody else. Adams is one of the best receivers in the game today. He is the Packers leading receiver despite missing more than two games. Adams has 53 catches for 675 yards which still puts him on pace for more than 100 catches even though he’s missed so much time. He also has eight touchdown catches in six games.

Adams has great body control and often gains an advantage within a step or two of the snap. He uses his size well and has excellent hands. He and Rodgers have outstanding chemistry and often know what to do with a wink or a brief look.

Allen Lazard had his best game as a pro against the Saints but then suffered a core muscle injury and hasn’t played since. He has 13 catches for an impressive 19.5 yards average and two scores in three games. Lazard is rapidly becoming a reliable WR2 and his return would be a big boost to the offense.

Marquez Valdes-Scantling has elite speed but his hands and route running are inconsistent. He is like the girl with the curl, when he’s good, he’s really good but when he’s bad, he’s so frustrating to watch because he drops some easy balls. Through eight games, MVS has 18 catches for 314 yards and three scores. The Packers need more consistency from Valdes-Scantling going forward.

The rest of the receivers have not contributed much. Equanimeous St. Brown missed the first four games of the season due to injury but has just one catch for 12 yards since returning. Darrius Shepherd has five catches for 46 yards in six contests while Malik Taylor has four catches for 52 yards and one touchdown in eight games. The Packers need more production from their third and fourth receivers if they face elite defenses.

Robert Tonyan has stepped up and established himself as the team’s top receiving tight end. He has played through nagging injuries and is second on the team with 24 catches for 314 yards and five touchdowns. Tonyan has become a solid red zone weapon and has improving chemistry with Rodgers.

Jace Sternberger got off to a slow start after starting training camp on the Covid-19 reserve list. He’s played in all eight games but has only eight catches for 86 yards and one score. He had a few drops early in the season but seems to be slowly regaining his strength and is rounding back into form.

Marcedes Lewis remains a strong run blocker and can catch the occasional pass. He has four catches for 32 yards and two scores. “Big Dog” also adds a lot of leadership in the locker room.

Josiah Deguara was showing promise when he was lost with a season-ending injury. He hopefully will return next season and be able to contribute more.

This unit has been hit hard by injuries but has performed exceptionally well. Through eight games, Rodgers has been sacked a total of nine times and really was under too much pressure only against Tampa Bay. The holes have also been there for the running backs who are all averaging at least 4.2-yards per attempt.

The Packers lost starting RG Lane Taylor for the season in Week 1. The Packers adjusted and moved players around and that was just the beginning.

Starting LT David Bakhtiari has missed the last three games with a chest injury. It’s still not clear when he’ll be back in the lineup. Prior to the injury, Bakhtiari was still playing at a Pro Bowl level. He remains one of the best pass blockers in the game and is a rock at protecting Rodgers’ blind side.

Elgton Jenkins is the starting left guard although he has been moved to tackle on several occasions due to injuries. He has not quite played as well as he did in his outstanding rookie season, but Jenkins is still a good lineman with the potential to become a perennial Pro Bowler.

Corey Linsley is having a career-best season at center. He is smart, tough and mobile enough to reach the second level on wide running plays and screens. Linsley is currently grading out as the top center in the league. He has always been very good but this season he has taken his game to another level.

Lucas Patrick has been a steady presence at right guard. Patrick has also filled in at center when Linsley was injured. He has also played both guard positions due to injury. Patrick’s versatility and toughness make him a solid player.

Right tackle has been manned by Billy Turner. Turner has played better at tackle this season than he did at guard. He has also shifted to the left side at times after Bakhtiari got hurt. Turner is a positive influence in the locker room and steady on the field.

Rick Wagner has filled in well at right tackle and even at tight end when injuries struck. Wagner plays better on the right side but was overmatched filling in on the left side. Wagner adds experience and savvy and has been a valuable backup.

Rookie Jon Runyan has filled in at guard in three games due to injury. He has never looked out of place and has played well despite not having any preseason games or offseason activities.