Who:  The Indianapolis Colts vs the Tennessee Titans

When:  8:20 PM Eastern, Thursday, November 12th. TV: FOX. Oh hey, another road game in prime time. Won’t lie: I originally thought the game was on NBC and panicked, because there’s no way I could handle Cris Collinsworth four days after how today’s game played out.

I’m not attacking nor do I dislike Taylor. He fumbled. It changed the course of the game. It happens. People get so upset on social media and don’t understand being critical of a fumble, a bad throw, or a coaching decision doesn’t mean you hate the player or coach. It doesn’t mean you’re a hypocrite. It’s simply being real.

After the Taylor fumble, there wasn’t a whole lot of good done by the offense. They completely went away from everything that was working. I believe in Frank Reich as a coach, but sometimes he thinks too much and outsmarts himself. This isn’t a new criticism – I said as much in 2018 as well. It’s hard to be critical, because Frank knows way more about football than we ever will, but sometimes you look at how things play out, and it’s easy to go “WTF is he doing?”

It all boiled down to a critical loss. As of now the Colts are 9th in the AFC standings. A win would’ve made them no worse than 5th. Also, right now they lose the tiebreaker to two of the teams in front of them. Today was bad.

1. Do you believe in miracles?

The Colts pick up where they left off Sunday, with a piss poor performance on offense. After a scoreless first quarter, the Titans get on the board first when Harold Landry sacks Rivers for a safety. There’s a breakdown in coverage on the ensuing free kick, and Kalif Raymond returns it to the Colts’ 28. Five plays later, Derrick Henry punches it in from 1 yard out, and the Titans lead 9-0.

After forcing the Colts to punt, the Titans drive steadily down the field before stalling. Out trots Stephen Gostkowski to attempt a 45 yard field goal. It’s up and…no good! But there’s yellow on the field. Holding against the Colts. Given a reprieve, Gostkowski drills it from 40 yards out to end the half.

12-0 Titans. The Colts have just 64 yards of offense, while being penalized 44 yards. Not good.

On the first play of the second half, Jordan Wilkins busts one for 44 yards. Four plays later, Wilkins takes it in from 4 yards out. After the sloppiness of the last five quarters, the Colts appear to be back on track.

Taking over in the waning moments of the 3rd quarter, the Colts reel off an 11 play drive. The big play is a 37 yard catch inside the Titan 20 by Marcus Johnson. Six plays later, Wilkins tallies again, this time from 1 yard out. Reich decides to go for 2, but it fails when Eugene Hilton drops the pass.

Both teams trade punts, and the Titans take over on the Colt 45 with 6:45 remaining. Leaning heavily on Henry, the Titans move to the 16 before the Colts stiffen. Gostkowski hits from 36, and the Titans regain the lead 15-12 with 1:53 remaining.

Isaiah Rogers returns the kick 33 yards, setting the Colts up in good position at their own 39. Michael Pittman comes up big, with receptions of 14 and 9 sandwiched around a 12 yard jaunt by Jonathan Taylor.

Within field goal range, the Colts are content to let the clock tick down to single digits, and the Titans let 15 seconds run off before stopping play with 20 seconds remaining.

The kickoff is high and short. It’s fielded by Jeremy McNichols, who hesitates, then hands it to TE Jonnu Smith. Smith takes several steps to the right before stopping and throwing a pass across field to WR Corey Davis. Davis corrals it, and there’s nothing but wide open real estate in front of him.

He takes it 75 yards to the house. No flags. Another miracle! Titans win!

“After further review, the ruling on the field has been changed. It has been determined the ball was thrown in front of the receiver, therefore it is an illegal forward pass. 5 yard penalty from the spot of the foul. First down.”

Under heavy duress, on the next play Ryan Tannehill’s desperation pass is picked off by Julian Blackmon.

It’s 20 years too late for the Bills, but the zebras finally got it right.

No one likes division games. No matter the records, they’re often close but typically boring due to the familiarity. Also, you – well, I – rarely connect with fans of other teams because eww gross division rival fans, but sometimes we find those who just root for their teams and actually aren’t jerks.

Enter E Money. She was kind enough to give us her thoughts on what her Titans might do: 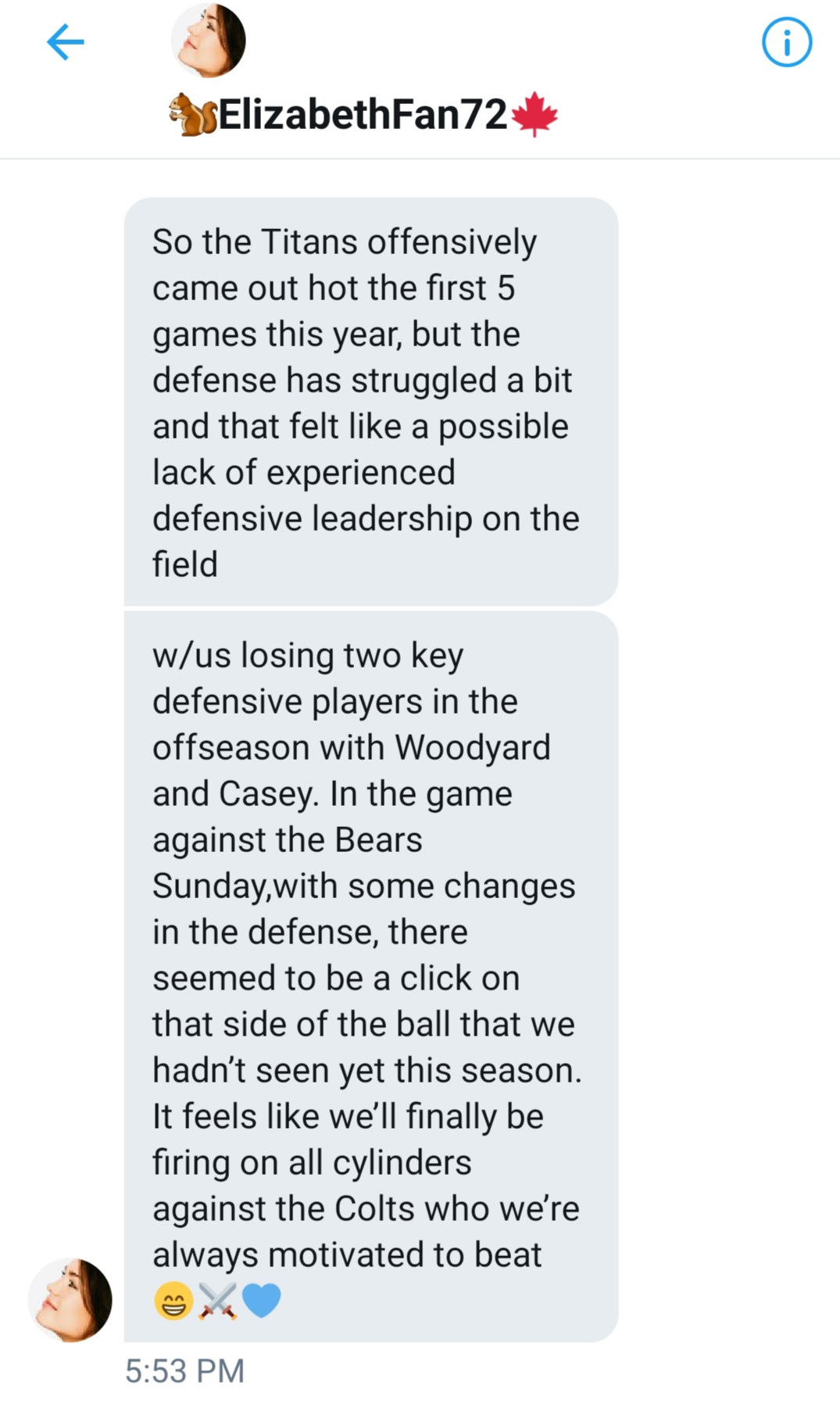 Is she right? Hell I don’t know. I’m just glad she contributed.

After tonight, I may have to put a moratorium on this section. Last week, the Colts were going to score more “because guinea pigs are cute” (BTW, the picture in the article was of the child’s actual pet guinea pig). This time it’s “because steak is good.” Of course it is, but it doesn’t have anything to do with a football game.