The Packers Have Done Surprisingly Well After Thursday Night Games 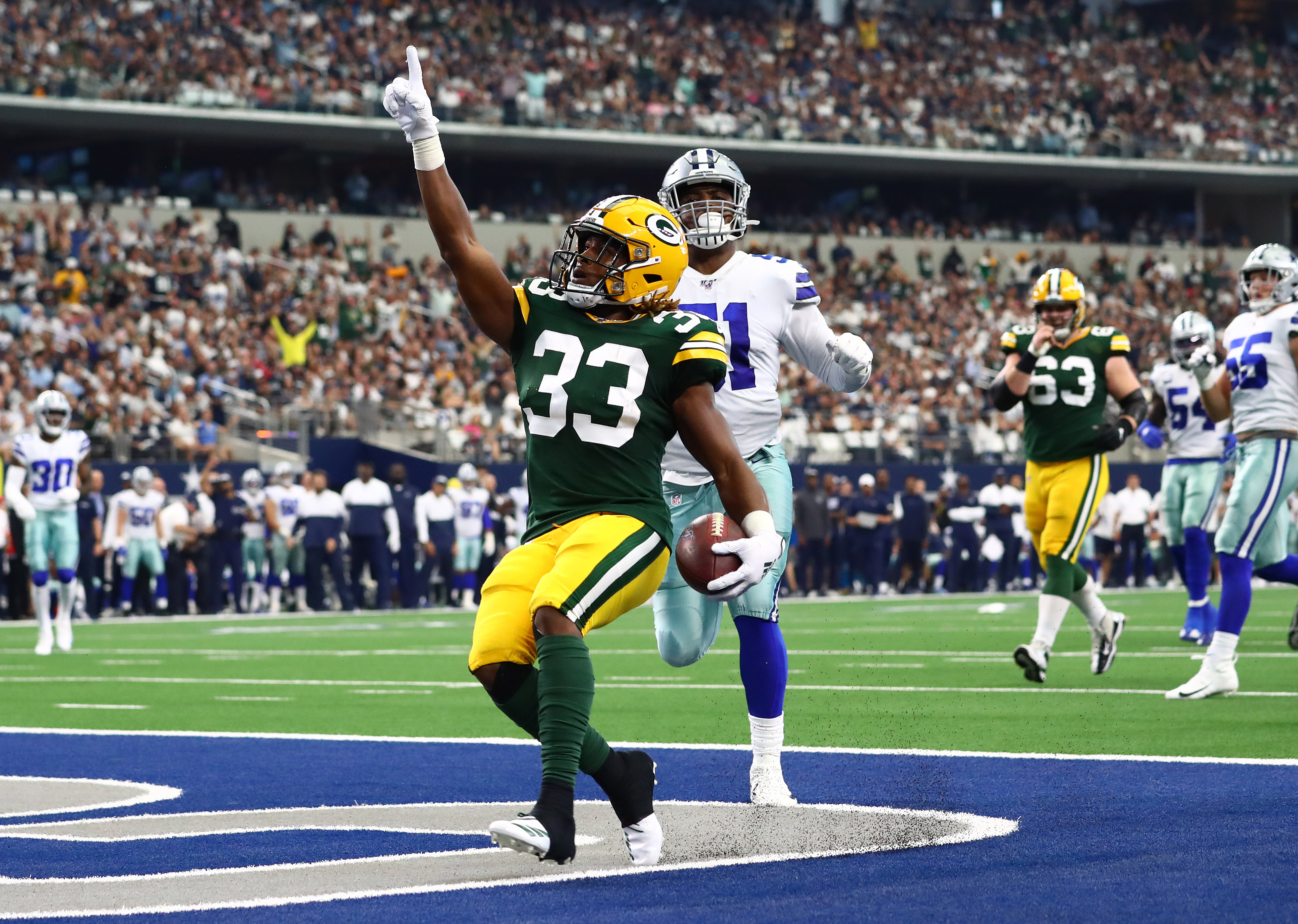 The Packers Have Done Surprisingly Well After Thursday Night Games

But how have the Packers done the week after their mini-bye? In their 14 previous Thursday night appearances, the Packers have taken advantage of the additional rest and won their next game 11 times, going 11-3-0.

The strong play after the mini-bye even included some of the weakest Packers seasons. Green Bay made their Thursday Night Football debut in 1991, a season that saw them struggle to a 4-12 record. They lost 10-0 to the Bears in a game that saw the Packers gain just 141 total net yards and caused a major celebration for those taking part in sports betting in Illinois. But a week later, the Packers defense rose to the occasion and created eight turnovers including five interceptions to blank the Tampa Bay Bucs 27-0.

Linebacker Brian Noble got the scoring started with a one-yard fumble recovery for a touchdown. Don Majkowski threw for 223 yards which included a 10-yard touchdown pass to Ed West. Vince Workman scored the other touchdown for the Packers who also sacked Bucs quarterbacks Chris Chandler and Jeff Carlson a total of six times. The Bucs gained only 170 yards for the game. The win increased the Packers record for the season to 2-6-0.

Three years later, the Packers lost on Thursday night to the Vikings 13-10 in overtime on Thursday night and then didn’t play again until a rainy Halloween Monday night in Chicago with both teams wearing throwback jerseys.

The rainy and windy conditions shut down the passing attacks of both teams. Brett Favre completed only six-of-15 passes for 82 yards including a 13-yard touchdown pass to running back Edgar Bennett. Bennett also ran for 105 and two touchdowns while Favre scrambled for a 36-yard touchdown run in the Packers 33-6 win over the Bears.

In 1998, the Packers lost to the Lions 28-20 on Thursday Night Football but then beat the Baltimore Ravens the following week 28-10. Return specialist Roell Preston got the Pack off to a quick start with a 71-yard punt return for a score. Brett Favre threw touchdown passes to Antonio Freeman and Robert Brooks and ran for a touchdown. Freeman led the Packers with nine catches for 103 yards while Travis Jervey led Green Bay with 72 rushing yards on 29 carries. The Packers also sacked quarterbacks Eric Zeier and Jim Harbaugh four times.

The Packers finally won their first game on Thursday night football in 2006, edging the Vikings 9-7. A week later, they closed out the season by soundly defeating the Bears 26-7. The Packers forced six turnovers in this game including pick sixes by Nick Collins and Patrick Dendy.

Rumors were circulating (again) that this would be Favre’s last game and that he would retire after the season. Favre would return in 2007, but he finished the 2006 season strong, throwing for 285 yards and a nine-yard touchdown pass to Donald Driver.

In 2007, the Packers lost to the Cowboys on Thursday Night Football but then clinched a playoff spot the following week with a 38-7 thrashing of the Raiders at Lambeau Field. Will Blackmon scored two special teams touchdowns, one on a 57-yard punt return and the other on a fumble recovery in the end zone. Favre also connecting on two long touchdown passes, one of 80 yards to Greg Jennings and another of 46 yards to tight end Donald Lee. Ryan Grant ran for 156 yards and a touchdown to help pace the Green Bay attack.

The Packers won the Super Bowl after the 2010 season and opened 2011 in thrilling fashion, beating the Saints 42-34 on Thursday night. After the mini-bye, the Packers continued their winning ways, overcoming an early 13-0 deficit to beat the Carolina Panthers 30-23 in Carolina.

Aaron Rodgers threw for 308 yards and two touchdowns including a 49-yard strike to Jennings and an 84-yard connection to Jordy Nelson. James Starks added 85 yards on the ground while the Packers intercepted Panthers quarterback Cam Newton three times with Charles Woodson stealing a pair and Morgan Burnett pilfering the third.

The Panthers offense gained 475 yards total offense but the Packers came up with key stops when it mattered most and earned the win.

A year later, the Packers lost for the first time after a Thursday night game in one of the most infamous defeats in the franchise history. Green Bay led 12-7 in the closing seconds but the Seahawks had the ball at the Packers 24 with time for one more play. Russell Wilson launched a pass downfield which Packers DB M.D. Jennings appeared to intercept. But Golden Tate fell on top of Jennings and the replacement referees split their decision with one ruling the play an interception and the other improbably giving the catch to Tate. Tate also clearly committed offensive pass interference on the play. After consultation, the officials ruled that Tate made the catch and awarded the Seahawks an improbable 14-12 win.

“Don’t ask me a question about the officials,” Packers head coach Mike McCarthy said after the game. “I’ve never seen anything like that in all my years in football.”

The game was mostly a defensive struggle. The Seahawks sacked Rodgers eight times which set back the Green Bay offense.

The poor officiating cost the Packers a game but the league quickly settled with the striking officials after enduring this poor performance combined with 24 penalties called in the game including 14 against Seattle and 10 against the Packers.

In 2014, the Packers lost to the Seahawks on Thursday Night Football, but the following week came back and defeated the New York Jets 31-24. The Pack overcame an early 21-3 deficit as Rodgers threw three touchdown passes including two to Randall Cobb and the game-winner on an 80-yard strike to Nelson with 2:08 left to snap a 24-24 tie.

Rodgers finished the game with 346 yards and three touchdowns while Nelson finished with nine catches for 209 yards and a score. The yardage total was Nelson’s career high and was the only time in his career he topped 200 yards in a game.

The Packers made a second appearance on Thursday Night Football later in 2014, crushing the Vikings 42-10. A week later after the mini-bye, the Pack edged the Dolphins 27-24. Miami led midway through the fourth quarter 24-17, but a Mason Crosby pulled the Packers closer and then Green Bay won it on a four-yard touchdown pass from Rodgers to tight end Andrew Quarless with just three seconds left on the clock.

Rodgers threw for 264 yards and three touchdowns in the game with Cobb and Nelson each catching one. Nelson had nine catches for 107 yards while Casey Hayward and Sam Shields came up with key interceptions of Ryan Tannehill.

A year later, the Packers beat Detroit on Thursday Night Football 27-23 and followed that up with a convincing 28-7 win over the Cowboys. Rodgers threw for 218 yards and two touchdowns while Eddie Lacy ran for 124 yards and a score and James Starks added 71 more rushing yards and ran for another touchdown.

In 2016, the Packers handily defeated the Bears on Thursday night then lost a heartbreaker to the Atlanta Falcons 33-32 in Atlanta in what would be a preview of that year’s NFC Championship Game.

Rodgers gave the Packers a 32-26 lead with 3:48 left in the game when he threw his fourth TD pass of the game, a seven-yarder to receiver Jeff Janis. But Matt Ryan led the Falcons back and won the game on an 11-yard strike to Mohamed Sanu with 31 seconds left in the game. The extra point gave Atlanta a 33-32 win.

Both quarterbacks had outstanding days. Rodgers completed 28-of-38 passes for 246 yards and four touchdowns. He also ran six times for 60 more yards. Davante Adams had 12 catches to lead the Packers in this game. Meanwhile, Ryan finished with 288 yards and three touchdown passes. Neither quarterback threw an interception.

The 2017 Packers crushed the Bears on Thursday Night Football 35-14 and then defeated the Cowboys in Dallas after the mini-bye 35-31. The lead changed hands five times in the fourth quarter alone in this nail-biter. Rodgers gave the Pack a 22-21 lead on a 10-yard pass to Jordy Nelson six seconds into the final quarter. A field goal by Dan Bailey 3:09 later gave Dallas a 24-22 advantage but cornerback Damarious Randall scored on a 21-yard interception return to give Green Bay back the lead, 28-24.

The Cowboys took back the lead with 1:13 left in the game on an 11-yard run by quarterback Dak Prescott. But that left too much time for Rodgers to mount a comeback. The Packers signal caller led the team on a nine-play, 75-yard drive that took only 1:02 off the clock. The drive culminated with a 12-yard pass to Davante Adams that gave the Packers a 35-31 victory with just 11 seconds left on the clock.

Aaron Jones ran for 125 yards and a touchdown while Rodgers threw for 221 yards and three scores.

In 2018, the Packers lost to the Seahawks on Thursday Night Football and followed that up with a 24-17 loss in Minnesota. Kirk Cousins threw three touchdown passes including one to Dalvin Cook to pace the Minnesota attack. The Packers had an early 14-7 lead on a touchdown pass from Rodgers to Davante Adams and a six-yard touchdown run by Aaron Jones.

Last season, the Packers lost their first game of the season on Thursday night against the Philadelphia Eagles. After the mini-bye, the Packers went to Dallas and soundly defeated the Cowboys 34-24. The Packers took a commanding 31-3 lead in the third quarter and then hung on for the win. Aaron Jones ran for 107 yards and four touchdowns to pace the Packers attack.

The Packers overall record after playing on Thursday Night is 11-3-0. They get a chance to improve on that mark next Sunday when they host the Jacksonville Jaguars at Lambeau Field.