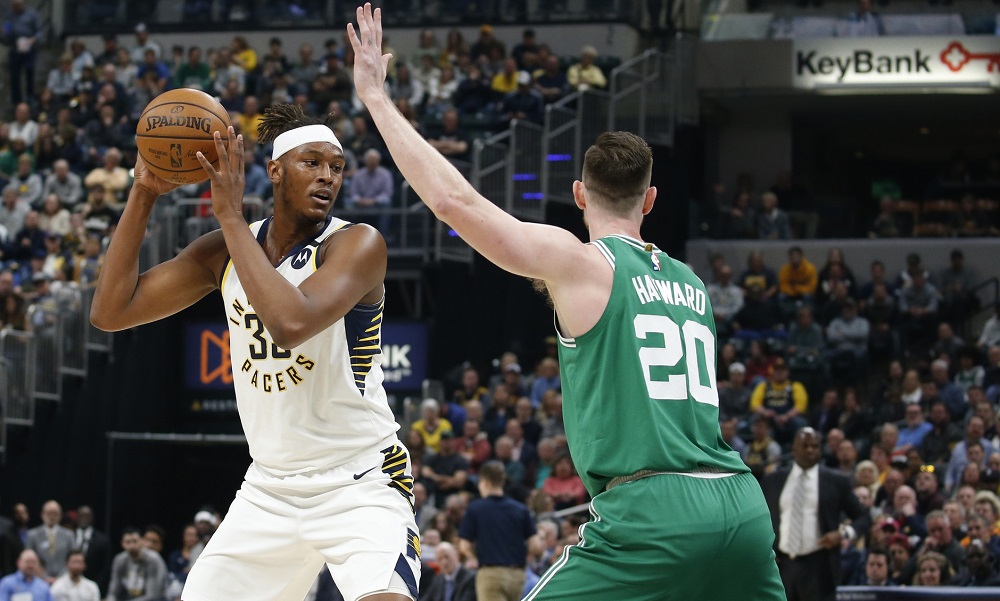 However, I can safely say that Myles Turner and Jrue Holiday will not be heading to Boston together (barring more major roster upheaval for Boston) for a very big but simple reason: Money. […]

The bottom line here when trying to make sense of the rumor mill this offseason is not just thinking about the present for the Celtics but also the future. Danny Ainge is trying to set the Celtics up to contend around Tatum and company for the next several years, not just 2020-21. Adding one big name (like Holiday) this offseason is feasible under Boston’s long-term budget. Adding two big-priced names is not doable, even if Hayward is moved for them. More of Boston’s core would have to go in that situation.

With the knowledge that the Celtics can only make a big swing here to take on one more high-priced player, the thinking here is that the C’s can do better than using it on Myles Turner, a 25-year-old who may or may not move the needle for the franchise. Whether or not a deal like that emerges remains to be seen.

Trade season is here, so naturally the Celtics are hip-deep – think: Tacko Fall’s hips, so really deep – in trade rumors. Other than Russell Westbrook wanting out of Houston (but we don’t want him), the biggest names in the rumor mill are the very talented pair of Jrue Holiday and Myles Turner. Rich Jensen wrote about Holiday yesterday, so today it’s Turner’s turn.

Or, more to the point, the topic is: why in the name of Red Auerbach would you trade Gordon Hayward for Turner, as rumored? Especially if Turner is expensive and not “the guy” to put you over the top.

There’s been plenty of discussion this short offseason about Hayward’s future. Many fans are in a rush to ship Hayward out of town. Are they sick of him being injured? (Understandable.) Are they expecting more and better production from a max contract guy? (Not unreasonable.) Is it his perceived politics, his wife’s Instagram posts, the “daddy’s always happy” silliness, or what?

Assuming Hayward opts in to the last year of his contract, and that no one better than Turner surfaces as a trade target, you absolutely keep him. The only thing holding him back during his Boston tenure – and it’s a big “only thing” – is injury. I’ve said here before, after two years of suffering, false starts and setbacks, Gordo finally played mostly healthy and well last year. In 34 minutes per game, he averaged 17/7/4 and shot 50/38/86%, better than his career averages across the board.

When he was on the court last season, the Celtics had a 115.4 offensive rating and 106.9 defensive rating. When he was off-court, the ratings were 112.2 and 107.8, respectively (according to basketball-reference.com). Not a dramatic difference, but we can fully expect even better this year.

Moreover, Hayward is liked and respected in the Celtics locker room and around the league as a good teammate. We saw him return from the badly sprained ankle before it was actually fully healed, to avoid missing any more playoff games. He skipped the birth of his first son for the same reason. If he’d been injury-free against Miami, that series would’ve gone much differently.

Hayward is now on an upward trajectory and, as I’ve also said here previously, it would be maddening after three years of waiting for GH to be himself, to then see him go somewhere else and be an All-Star again.

Because that is exactly what would happen.

The Celtics can live without Turner. What they really need instead is to sign Aron Baynes back. That’s what most of us want anyway.

On Page 2: The rivalry runs deep

[Cousy] took off his black wool coat with the alpaca collar and the Kelly-green team blazer that bears the gold Celtic emblem on its breast pocket. Then he sat down, almost savoring the attention that his very silence had drawn to him, opened the Traveler and looked at a headline that said: L.A FEELS CELTS ARE WASHED UP. […]

“The Lakers,” says Red Auerbach, the volatile Celtic coach, “are a tremendous team but they, and too many other people in Los Angeles, have a feeling that the Lakers are better than we are. There are a lot of people who are already saying that the Lakers can beat the Celtics for the championship. [Last year the Celtics beat the Lakers out of the title in an overtime period of the seventh and final playoff game.] So far the Lakers aren’t the champions of anything. The Celtics have great pride and great talent and we don’t lie down and die for anyone. The Laker organization has said that ‘Los Angeles is the Basketball Capital of the World.’ Los Angeles has been in this league for two years and it’s the basketball capital of the world!” To this summary Auerbach adds a short, heartfelt obscenity.

Nor is Fred Schaus, the coach of the Lakers, lost for words on the subject of Boston and Auerbach. “The Celtics have a great basketball team and Red Auerbach has done a great job of coaching them for years,” he says. “I respect Auerbach as a coach. But I don’t like him. I just plain don’t like him. And he knows it.” Fred Schaus and Red Auerbach do not speak. Though they are often drawn together in arenas, airports and hotels, they turn away from each other or sit in distant seats. At one point last week they were side by side for over an hour, yet they refused to say hello.

While researching some info about Tommy Heinsohn, I came across this article from February 1963. The only point I’m making here is that Boston and LA have never liked each other. Never. And Red was going to make sure you knew it. Old school NBA, for the win.

Spend a few minutes to read that article; some good basketball history in there. And when you read, do so knowing that the “washed up” headline was wrong. The Cs took the 1963 title in six games, winning the closeout in LA. It was Bob Cousy’s last game.

And, finally… Yet another RIP

Tommy’s passing was, sadly, not the only awful news for former Celtics this week.

This article from 2016 gives the basics of Terry’s Celtics story.

Terry Duerod spent a moment in the sun and years in the heat.

He was a bench player on the 1980-81 NBA champion Celtics before becoming a Detroit firefighter, a position he’s held for 27 years. […]

The Mavericks released him after 18 games, and the Celtics signed him as a free agent. It was a fortuitous move: In Boston, he became a fan favorite and earned a championship ring. When he entered games, Celtic fans would chant, “Dooooo.”

“That was a special feeling, to have fans chanting for me like that,” he said. “I’ll never forget it.

“Bird, (Kevin) McHale, (Robert) Parish, (Nate) Tiny Archibald — they were all great guys. Larry (Bird) was a jokester. Those are relationships I’ll cherish the rest of my life.”

Duerod got into four games in the 1981 NBA Finals, finishing with six points and one steal as the Celtics beat the Rockets in six games.

Terry’s feeling about his teammates was mutual.

“Terry Duerod, you say that name and maybe it means nothing to some people. To Larry and I, Doo is one of those guys you played with along the way who is always in your mind, a great teammate and guy who we learned something from,” McHale said. “He’d play one on one with you all the time. He’d be hilarious. If he ever beat you, the next few days were miserable. He couldn’t remind you enough. It was just one of those things, one of those shared experiences that may not mean anything to other people, but to us, those are the people and experiences that made us the players and people we were.”

Terry was not a star in Boston – he played sparingly, usually when the game was a Celtics blowout – but he was beloved nonetheless. Garden fans were wild about his hustle and ability to hit the occasional three (in an era when those were seldom attempted). He became a cult hero in the same way that fans embraced Scal, Yabu and Tacko years later.

Terry passed away after fighting leukemia, far too young at 64. RIP Dooooooo.

Boston.com: Tacko Fall discussed his rookie year, his future in Boston, and viewing his height as a blessing