Eagles seem discouraged and confused in loss to Giants, 27-17 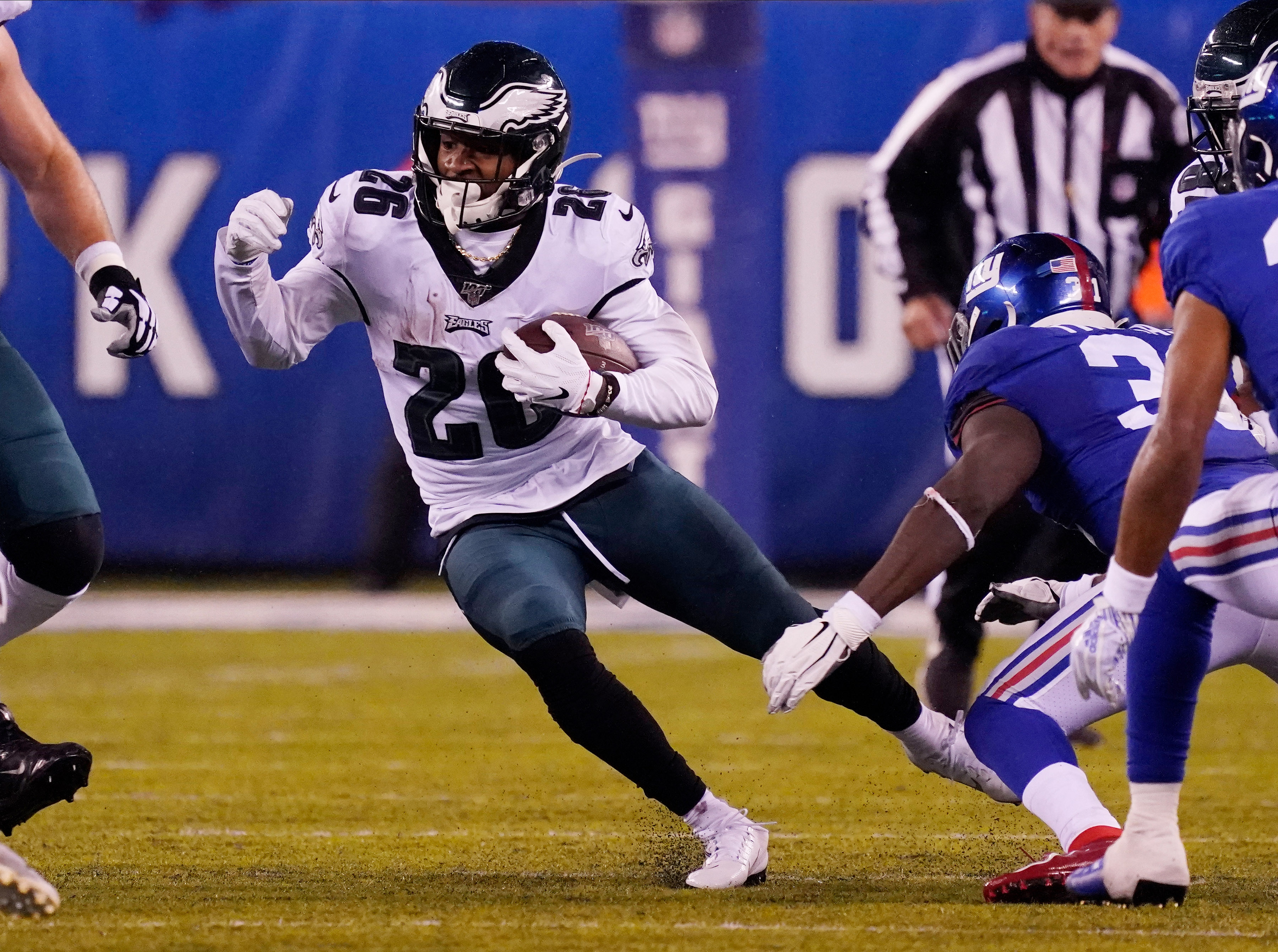 Eagles seem discouraged and confused in loss to Giants, 27-17

We talked all week about the incremental improvement in the Giants’ overall game, but we didn’t expect the corresponding decline in the Eagles’ development to continue. But here we are, after a bye week and improved health profile for the Birds, and all we’ve got to show for it is a mess of blame to go around for every phase of the Eagles’ game plan which failed miserably Sunday afternoon at the Meadowlands.

The Eagles looked disjointed and flat-footed against the Giants. Execution of basic schemes seemed off or poorly timed. Worse, we saw some serious head-hanging and frustration from veteran players who should know better by now.

EYE can’t add much more to the game analysis than Brandon Lee Gowton did with his “first impressions” at Bleeding Green Nation after the game:

Yeah, it was a bitter pill for Eagles fans to squirm through this game.  Benjamin Solak of BGN took the criticism of the Eagles’ lame effort to another level:

“Doug Pederson— Worst Pederson game I can remember. Didn’t take some fourth downs he should have, didn’t call plays on third down to set up fourth down, made a wanton decision to go for a 2-point conversion down 4, and most importantly, brought a flat, unchanged, uninspired, rusty team out of the bye week for the fourth time in his career.

“Isn’t he pissed? Isn’t he tired of this? Doesn’t he want his job to be easier? The offense is panicky, afraid of its own quarterback, dedicated to Richard Rodgers and Greg Ward while Travis Fulgham and Dallas Goedert fall useless to the wayside. Pederson has failed to integrate any new ideas into the offense and regularly limits the existing offense with a the caricuture of freshness and ingenuity that is a Jalen Hurts power read. This is an aimless coaching staff.”

“The Philadelphia Eagles feel broken, no matter their first-place standing in the horrendous NFC East.  They had a bye week to recalibrate and entered Sunday’s game against the New York Giants as healthy as they’d been since the beginning of the season, but the same old warts surfaced in a 27-17 loss.

“The defense talked all week about respecting Daniel Jones‘ legs after he posted 92 rushing yards in their Week 7 matchup but were again vexed by New York’s zone-read game as Jones racked up 64 rushing yards on nine carries (7.1 average) with a touchdown.

“There was an emphasis on eliminating self-inflicted wounds, yet the lack of discipline persisted in the form of 11 Eagles penalties. They went 0-for-9 on third down — the first time they were held without a third-down conversion since 2004.

“Carson Wentz was looking to rebound from a rocky first half but continued to struggle with his accuracy, going 21-of-37 for 208 yards with no touchdowns or interceptions. Some passes sailed high. Some were at his receivers’ shoelaces. He’s playing erratic football, and it’s hurting his team.

“The loss dropped the Eagles to 3-5-1. Even so, the Eagles remain in first place and still have a 70% chance of winning the division. But this season should be setting off alarm bells inside the NovaCare facility, regardless of whether it ends with an NFC East title by default.”

Things just aren’t coming together for the Eagles in 2020.

Silver lining: While Wentz wasn’t great, he did avoid committing a turnover for the first time in nine games. His streak of eight straight games with a turnover was the longest active streak in the NFL.

Eye-popping NextGen Stat: Running back Boston Scott would be on track for a Hall of Fame career if he played the Giants every week. He now has 421 total yards and six TDs in four career games against the Giants, compared to 377 yards and one TD against the rest of the NFL.

Up next: The Eagles really could have used this win, as they are heading into the roughest part of their schedule. They’re at the Cleveland Browns next before facing the Seattle Seahawks, Green Bay Packers and New Orleans Saints.

Daniel Jones threw for 244 yards and ran for a touchdown, Wayne Gallman Jr. had two TD runs and the Giants beat the Philadelphia Eagles 27-17 on Sunday, making their case to win the dreadful NFC East.

The Giants improved to 3-7 under first-year coach Joe Judge with their second straight win, snapping an eight-game losing streak against Philly.

“I’ll tell everyone right now, it’s irrelevant,” Judge said about the standings. “The only thing that matters is if we keep improving as a team and go 1-0 every week. The overall standings, we’re not going to look at those, we’re not going to focus on those. We’re going to have an emphasis on organization. We have to keep improving as a team to give ourselves a chance to be the program we want to be.”

Carson Wentz and the rest of Philadelphia’s offense were out of sync following a bye. They were 0 for 9 on third downs. Boston Scott had a 56-yard TD run early in the third quarter but the Eagles couldn’t get closer.

“We made it tougher on ourselves, left some plays out there, didn’t execute, 0 for 9 on third downs is frustrating,” Wentz said.

Jones ran untouched 34 yards for a score to cap a well-executed 85-yard drive to start the game and the Giants led the entire game. It was similar to Jones’ 80-yard run against Philadelphia in a 22-21 loss on Oct. 22 except he didn’t stumble at the 8 this time.

Jones finished with 64 yards rushing and the Giants had 151 on the ground.

“We were confident in what we were doing all day,” Jones said. “Offensively, we felt like we were executing and it was up to us to keep drives going.”

The Eagles were down 14-3 at halftime before Scott broke a long run and tiptoed down the left sideline. Miles Sanders ran in for the 2-point conversion to cut the deficit to 14-11.

But the Giants quickly answered with Gallman’s 1-yard TD run. Jones hit consecutive passes of 27 yards to Sterling Shepard and 38 yards to Golden Tate to set up the score.

Philadelphia came right back. Wentz completed a pair of 16-yard passes to Jalen Reagor and Greg Ward. Sanders ran 14 yards to the 5 and Corey Clement took it in from there for his first TD since Oct. 11, 2018. Eagles coach Doug Pederson chose to go for 2 and Wentz was sacked.

Jones had lost 16 straight starts to teams other than Washington.

When Gallman leaped in from the 2 on fourth-and-1, the Eagles were down 14-3 just seconds into the second quarter.

“We gave them 14 early and we can’t do that,” Eagles defensive end Brandon Graham said. “We have to strike first.”

The Eagles got Sanders and wide receiver Alshon Jeffery back. Jeffery returned for the first time since he had foot surgery last year. He had no catches and one target. Sanders, the team’s leading rusher, was back after missing three games with a knee injury. He ran for 85 yards.

INJURIES— Eagles: LG Nate Herbig was a late scratch because of a finger injury.

Giants: RG Kevin Zeitler came out with a concussion.