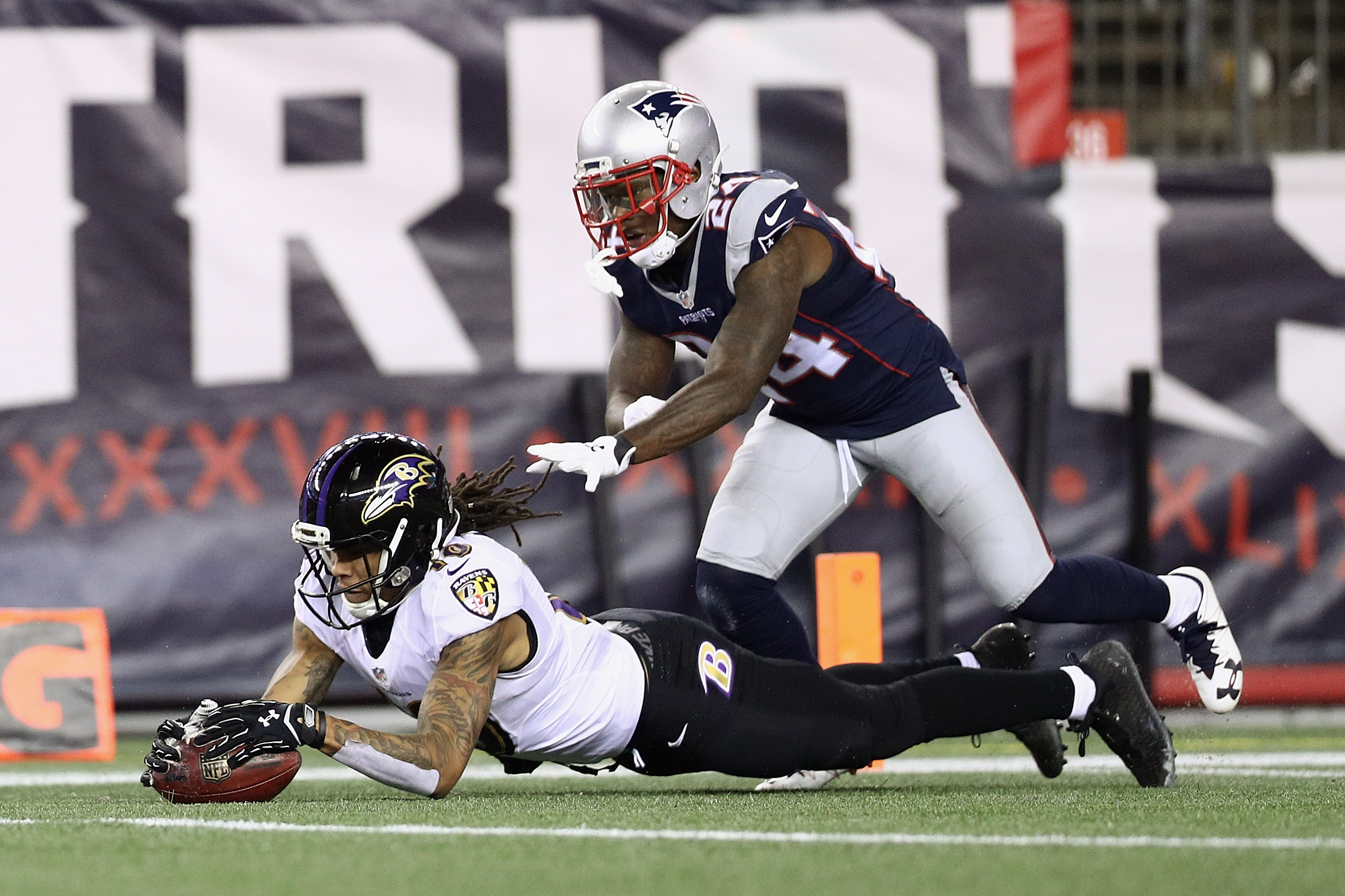 Wicked night for football, but the New England Patriots outplayed the Ravens anyway… and suddenly there is major doubt in Baltimore, as expressed by ESPN beat writer Jamison Hensley:

“The Baltimore Ravens left New England wincing, and it goes beyond Sunday night’s 23-17 loss to the Patriots amid a downpour.

“Injuries continue to hit the Ravens, who watched tight end Nick Boyle get carted off the field with a knee injury and nose tackle Brandon Williams get ruled out with an ankle injury. This comes after defensive end Calais Campbell (calf), inside linebacker L.J. Fort (finger) and cornerback Jimmy Smith (ankle) were inactive.

“Without Williams and Campbell up front, the Ravens got run over by the Patriots. Baltimore allowed 121 yards to New England running back Damien Harris, the most since the Titans’ Derrick Henry totaled 195 yards rushing in last season’s upset loss in the playoffs.

“Playoff run? The Ravens (6-3) are limping to start the second half of the regular season and are fighting for their postseason lives.”

Baltimore’s hopes of a third straight AFC North title have faded. The Ravens are three games back of the undefeated Pittsburgh Steelers (9-0) with seven games remaining.

The NFL’s longest current road win streak came to an end. Baltimore had won 10 straight away from home before Sunday night’s loss. It was the Ravens’ first loss on the road since Week 3 of last season.

Quarterback Lamar Jackson fell to 0-6 (including playoffs) when trailing by 10 or more points at any point in a game. Last Sunday, Jackson notched his first NFL win when behind at halftime. But he couldn’t deliver the bigger comeback in New England.

Jackson threw two touchdown passes to Willie Snead IV and led Baltimore in rushing (55 yards). But his biggest mistake was his first interception in six prime-time games. Late in the first half, Jackson forced a pass deep down the right sideline to Marquise “Hollywood” Brown and was picked off, ending a chance of a long field goal (which could have tied the game at 13).

Pivotal play: Bad snap in fourth quarter. Trailing by six points (23-17), the Ravens were at their own 38-yard line with six minutes left when center Matt Skura slid a snap back that never got off the ground. Jackson jumped on the loose ball for a 16-yard loss. This is the second straight game in which Skura’s poor snaps have been an issue. A week ago, the Ravens said Skura had trouble snapping because of a cut on his thumb. This time, his bad snap gashed Baltimore’s chances to come back.

Ravens rookie middle linebacker Patrick Queen couldn’t locate a trick pass in enough time to make a play on the ball in the end zone, which resulted in Rex Burkhead catching a 24-yard touchdown pass from wide receiver Jakobi Meyers in the second quarter. The completion probability was 34%, according to Next Gen Stats. That’s the second-most improbable completion by a non-quarterback in 2020.

Up next: Ravens vs. Tennessee Titans. It’s a rematch of last season’s divisional playoff upset, when the Ravens became the first No. 1 seed to fall to a No. 6 seed since 2010. Baltimore needs to solidify its run defense before facing Derrick Henry again.