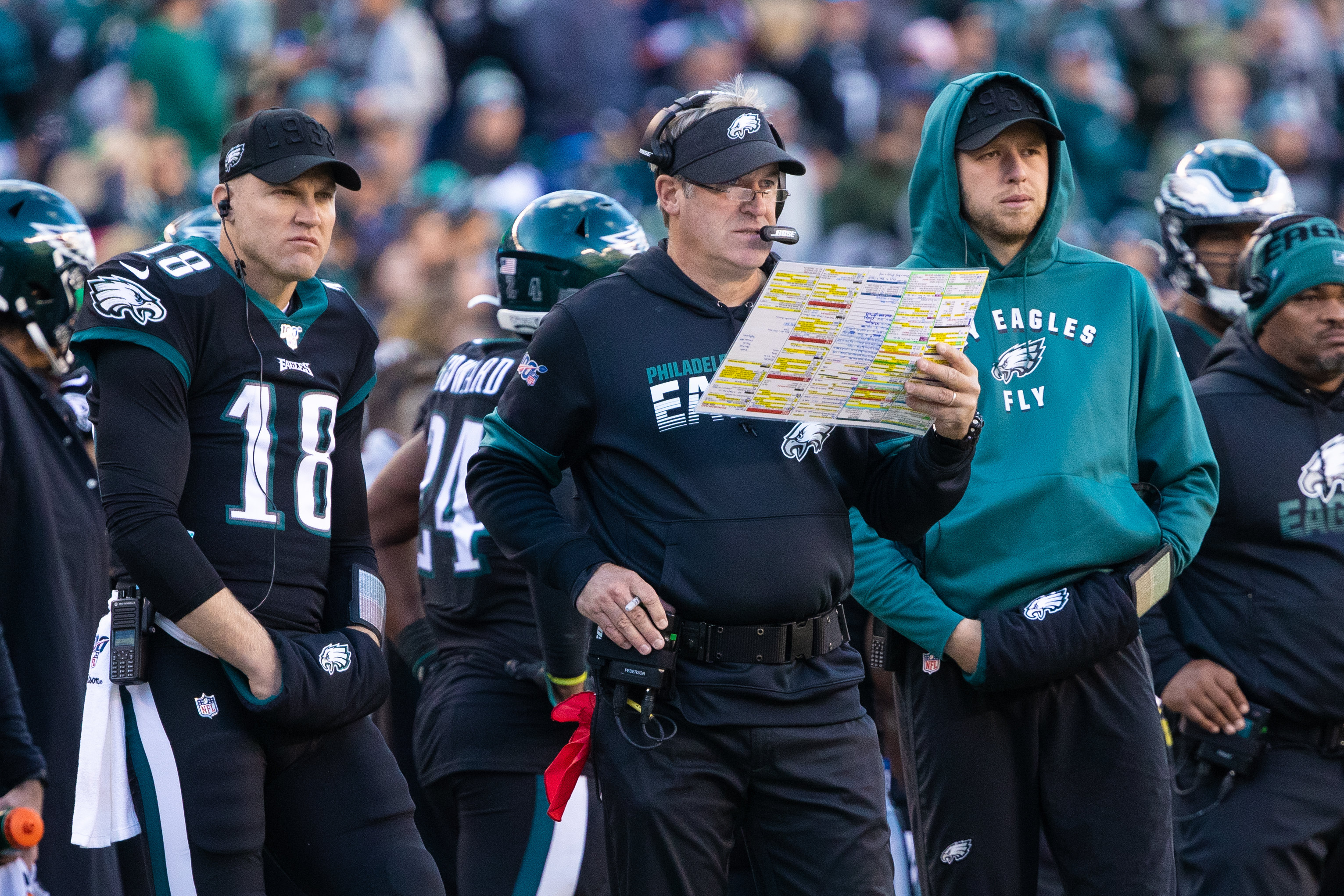 We’ve been through our fair share of disappointing Eagles teams which despite inherent talent and leadership somehow managed to trip on their own shoelaces. This current edition seems to be one of them.

If the current woes of the team could be simply attributed to the aimless vagaries of a COVID-19 factor which certainly affected practice routines and position-room meetings, then we could simply write off the team’s struggles in 2020 as an anomaly.

But there seem to be many more reasons why the Eagles aren’t clicking, and they point to a franchise which has possibly lost its competitive edge on several organizational fronts.  Since winning the Super Bowl a few years ago, the Eagles haven’t quite had the “new norm” we all envisioned.

Dave Zangaro of NBC Sports lists his main problems with what’s happening with this team:

The Eagles saw something special in Wentz before the 2016 draft. Howie Roseman pulled off gutsy moves to get them from 13 to 8 all the way down to No. 2 in the draft because they identified Wentz as their quarterback of the future and they went and got him. It was an impressive move from the GM who had just been put back into power. And the Eagles have never wavered from Wentz being their future. Even after Nick Foles won Super Bowl MVP, Carson was always their guy.

And in Wentz’s second NFL season, there’s no questioning how great he was. In 13 games, he threw 33 touchdowns to 7 interceptions and probably would have been NFL MVP had he stayed healthy. He looked like he was on his way to a great career.

In 2018 and 2019 he was good but not back at that level. Still, there were all the signs of a great quarterback and he had the back injury in 2018 and those ACLs can really take a couple years to heal completely. In 2019, he was pretty good again. He became the first 4,000-yard passer in team history and threw 27 TDs to 7 INTs.

But in 2020, he has taken a major step backward. The in-game decisions, the turnovers, the accuracy have not trended well. The big plays aren’t there anymore.

“The hope this year is for Wentz to get back to his level of play in 2018 and 2019. Forget 2017. But that’s what everyone signed up for with Wentz. The Eagles thought he was a special player and now the hope is that he can just be a good player again. I still think Wentz will rebound from his start this season and turn in a good second half of 2020 but I’m questioning whether he’ll ever get back to his 2017 form. And that’s a legitimate fear.”

Eagles will always struggle to draft

When Howie Roseman outlasted Chip Kelly and was put back in charge of football operations, Jeffrey Lurie did so with an important caveat. Roseman needed to hire a top personnel man and after an exhaustive search, the Eagles hired Joe Douglas. Douglas came from Baltimore, the cradle of draft stability, and was supposed to restore that in Philly.

But Douglas didn’t last very long with the Eagles, taking the GM job with the New York Jets and now his old position in Philly is held by his former No. 2, Andy Weidl.

Back when the Eagles hired Douglas, it was a move most agreed was a good one. But the Eagles haven’t been able to find the incredible consistency the Ravens still have even after the retirement of Ozzie Newsome.

During that same span, here are the Eagles’ first round picks:

The Eagles traded out of the first round in 2018, which is where the Ravens drafted their future MVP quarterback. The Wentz pick worked but the Barnett pick has been disappointing; he’s been an OK player but not a star. We’ll see about Dillard and Reagor.

But overall, the Eagles haven’t been able to be a consistently good team in the draft. They have gotten by with some older players and key free agent pickups but they know that long-term, the way to build is through the draft. And there’s a fear they’re just not that good at it.

After the Super Bowl, when Doug Pederson talked about the “new norm” we all assumed that meant trying to be one of the top teams in the NFC each year, getting home-field advantage in the playoffs and even a bye week. That’s what Roseman even talked about as the goal back then. But since that Super Bowl year, the goal posts have moved. Now, it’s all about “get in the playoffs and see what happens.”

“This isn’t the NBA so I’m certainly not calling for a complete destruction of the team and a lengthy rebuild. It doesn’t take that long for NFL teams to rise out of the ashes. But it also feels like the Eagles are stuck between trying to win right now and trying to build for the future and sometimes those two sides seem to work against each other.”

How about this one mini example: The Eagles have a chance to win the division so they’re going to trot out a 38-year-old Jason Peters at left tackle instead of playing Jordan Mailata, a young player with promise.

The injuries will never end

Remember in 2017 when we thought the Eagles had to fight through a lot of injuries to win the Super Bowl?

In the three years since, the Eagles have been decimated by injuries and sometimes multiple injuries at the same position group. It’s been hard to figure out why it’s happening and the scariest part here is that there just don’t seem to be any definite answers. The Eagles have overturned the medical staff, the training staff and the injuries keep happening.

Is there something in the water? What’s going on here?

Sure, football is a violent sport and injuries happen. Heck, in this weird 2020 season, injuries are up league-wide, but the Eagles were the trendsetter in this area. And it’s been really frustrating to see all of their injuries the last few years. The worst part is there’s no reason to think they’re going to stop anytime soon.

Let’s start by saying Pederson is a pretty good head coach. He’s the type of coach players love to play for and as we’ve seen this year, that means an awful lot. The Eagles will never give up under him and hiring him back in 2016 was an incredible move that helped bring a championship to Philly.

But we’ve also seen the limitations in Pederson’s coaching ability at times this season. Sure, he’s not playing with a full complement of players on offense but he just doesn’t seem to have the same knack for calling plays as he once did and he hasn’t always seemed to be on the same page as his franchise quarterback when it comes to calling the right plays for him.

This offseason, the Eagles elected to leave the offensive coordinator position vacant and instead promoted Press Taylor and brought in a few outside assistants. There’s nothing wrong with an unusual coaching structure but if it doesn’t work, then everyone’s looking at the guy in charge. That’s Pederson.

“And aside from that, Pederson’s in-game management hasn’t been great this season either. He’s gone on the WIP Morning Show twice this season on Mondays and admitted fault for something he did the day before. I give him credit for being accountable but it doesn’t take away from the poor decisions. Ultimately, Pederson isn’t the Eagles’ biggest problem, but it’s still something to be a bit scared about.”

To Pederson’s credit, he’s not dodging the tough questions, in fact he’s getting downright feisty in his interviews.

He knows the Eagles now enter the toughest phase of the 2020 regular season – the five opponents ahead, starting with Cleveland on Sunday, have a combined record of 32-13. The Eagles have the toughest remaining schedule of any team in the NFL.

“We’re all frustrated,” he said on Monday afternoon. “We know we’re so much better and we’ve just got to buckle in this week. Everything is still right in front of us. We’ve got a great opportunity on Sunday.”

Pederson wants a particular environment this week. He knows the locker room expressed its frustration in the postgame scene on Sunday. He knows how the players reacted. And Pederson wants that emotion to carry forward to this week when the players report back to the NovaCare Complex and prepare for Cleveland. It’s going to take great emotion and focus and execution to beat the Browns, a team with a punishing running game offensively and a defensive front to be reckoned with. The Browns are for real. They’ve won by outscoring teams (like Dallas) and by outslugging teams (like Houston on Sunday, a 10-7 victory).

“It’s going to be a mood where, I don’t want it to be a panic mood by any stretch of the imagination,” Pederson said. “I don’t want any of that, but I do want the guys to feel that emotion they felt after the game and feel that sort of anger, that ‘mad’ feeling they had and channel that for good, channel that for their week of preparation. I talk to the team a lot about preparation and hard work and you can’t substitute for that. The way you practice is the way you’re going to play and we’ve got to focus on that and take care of the details during the week.”

Pederson refuses to comment on organizational issues which tend to suggest the franchise is at a crossroads of direction for the future. He says instead it’s more about he and Wentz somehow upping their individual games.

“It’s always [about] the head coach and the quarterback,” Pederson said. “Carson just needs to be Carson. He doesn’t need to do anything more than that. He needs to continue to build on the confidence that he has with the guys around him – getting Isaac Seumalo back gives us stability in the offensive line and we don’t have as many moving pieces there, that helps the quarterback’s frame of mind – and then just keep working with the young guys, staying on the same page with them. Keep these guys coming. Just be him. Just lead this team like he knows how.”

If only it were that simple…