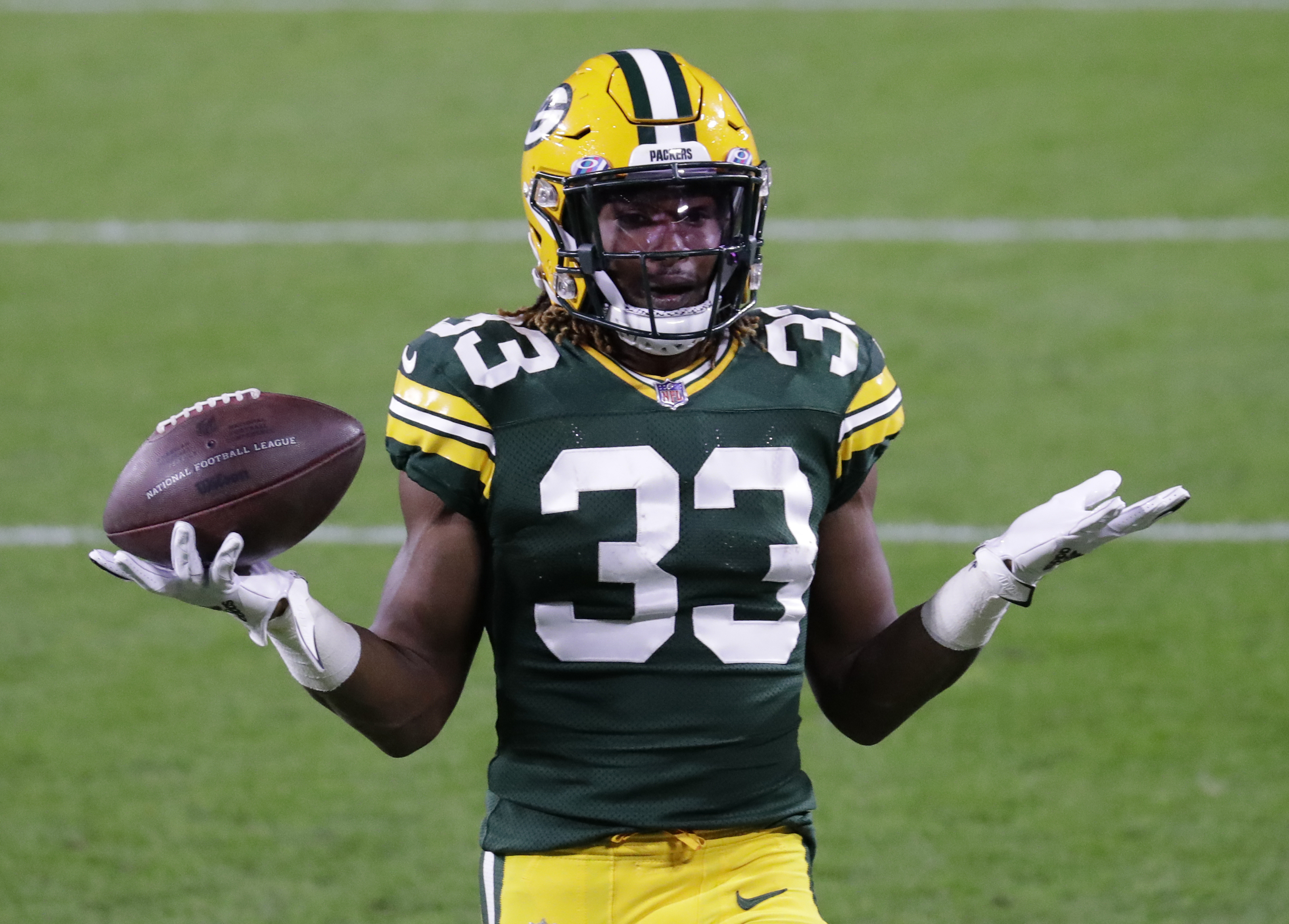 The Green Bay Packers signed Pro Bowl left tackle David Bakhtiari to a four-year contract extension this past weekend that will make him the highest paid offensive lineman in NFL history. Earlier this season, the Pack also inked defensive lineman Kenny Clark to an extension. That takes care of two key players who were scheduled to become unrestricted free agents this coming offseason.

But the Packers still have several key players with contracts that expire after the 2020 campaign. Here is an updated look at the odds that GM Brian Gutekunst re-signs these players before they hit the open market this offseason.

Jones continues to be the Packers most productive running back. Thus far this season, he has gained 493 yards on 103 carries. That gives him a strong 4.8-yards per carry average. He has run for five touchdowns so far this season while also catching 28 passes for 231 yards and two more scores.

The former UTEP star continues to provide an extra dimension for the Green Bay offense when he’s in the lineup. Jones has excellent quickness and is a threat to break a long run any time he touches the football.

Over the course of his career, Jones has worked hard to improve as a pass protector and a route runner. He is now a dangerous weapon as a receiver and he has an excellent nose for the end zone.

The big issue with Jones remains the fact that he is a difference-making talent at what most NFL teams regard as a non-premium position. Running backs are presently undervalued by nearly every team across the league and few teams are willing to pay big bucks for anybody but the very top echelon runners.

The Packers have reportedly been negotiating with Jones’ agent. There is little doubt the Packers star running back can probably sign for more money elsewhere if he hits the open market, but he may be willing to give the Packers a slight home-town discount.

Look for the Packers to try to sign Jones next to a deal close to Austin Ekeler’s deal with the Chargers. The Packers will make a strong push to keep Jones, but they won’t be willing to break the bank to do so.

Odds He Re-Signs with the Packers: 60 percent

Linsley has been a solid starting center for the Packers since becoming a starter as a rookie back in 2014 but this season, he has taken his game to a new level.

The 6’3”, 302-pound Ohio State alum has graded out as the best center in the league this season according to Pro Football Focus.

Linsley is a solid pass blocker and run blocker. He has the mobility to make key blocks on the second level on outside runs and screen passes and calls the signals for the Packers offensive linemen.

Linsley has stayed healthy for most of his career and he has been quite durable. He’s played in all nine games so far this season and has played in every game for the Packers since the start of the 2017 campaign.

Unfortunately, the signing of Bakhtiari this past weekend makes it much less likely that the Packers can retain Linsley. Green Bay may move Lucas Patrick to center or turn to Jake Hanson who they selected in the sixth round of this year’s draft if Linsley doesn’t return. Hanson is currently on the practice squad/injured list. The Packers could also draft another center or sign a lower-priced potential starter at the position.

Linsley is almost certainly going to get more money if he tests the free agent market and it is unlikely to be back in Green Bay in 2021.

Odds He Re-Signs with the Packers: 33 percent

Staying healthy has been a big issue for King since the Packers selected him in the second round of the 2017 NFL Draft. The former University of Washington star has never played a full season, coming closest last year when he played in 15 games while starting 14.

2019 was by far King’s best season. He led the team with five interceptions and had 66 total tackles, by far a career high.

Consistency has been an issue for King throughout his career. He often gives up too many big plays or takes bad penalties when he’s not on his game. When he is playing well, his size and long arms make him a solid defender who can play physically against opposing receivers and battle for the ball when it’s in the air.

This year, King has only played in four of the team’s nine games because of a quad injury. His failure to stay healthy will likely make Gutekunst hesitate before offering King a big contract.

It is likely that at least one other team will take a chance on King and make him a big offer if he hits the open market this offseason. The only way he stays with the Packers is if he is willing to take less money than he would likely get as a free agent.

Odds he re-signs with the Packers: 25 percent

The Packers coaching staff is extremely high on Jamaal Williams and for good reason: he’s excellent in the locker room, works hard, is a smart player and gets the technical part of the game right.

Williams isn’t the breakaway threat that Jones is, but he’s steady, tough and runs well inside. He is the Packers best pass blocking running back and runs the best routes of any RB on Green Bay’s roster.

Thus far this season, Williams has 324 yards and one touchdown on the ground while averaging 4.3-yards per carry. He also has 26 catches for 208 more yards.

Williams is good enough to start for several teams in the NFL. He may want to try to sign elsewhere to get that opportunity and to earn a bigger paycheck.

There is little chance the Packers sign both Jones and Williams. Williams probably only stays if Jones heads elsewhere and even then, the Packers won’t break the bank to bring him back.

Odds he re-signs with the Packers: 20 percent