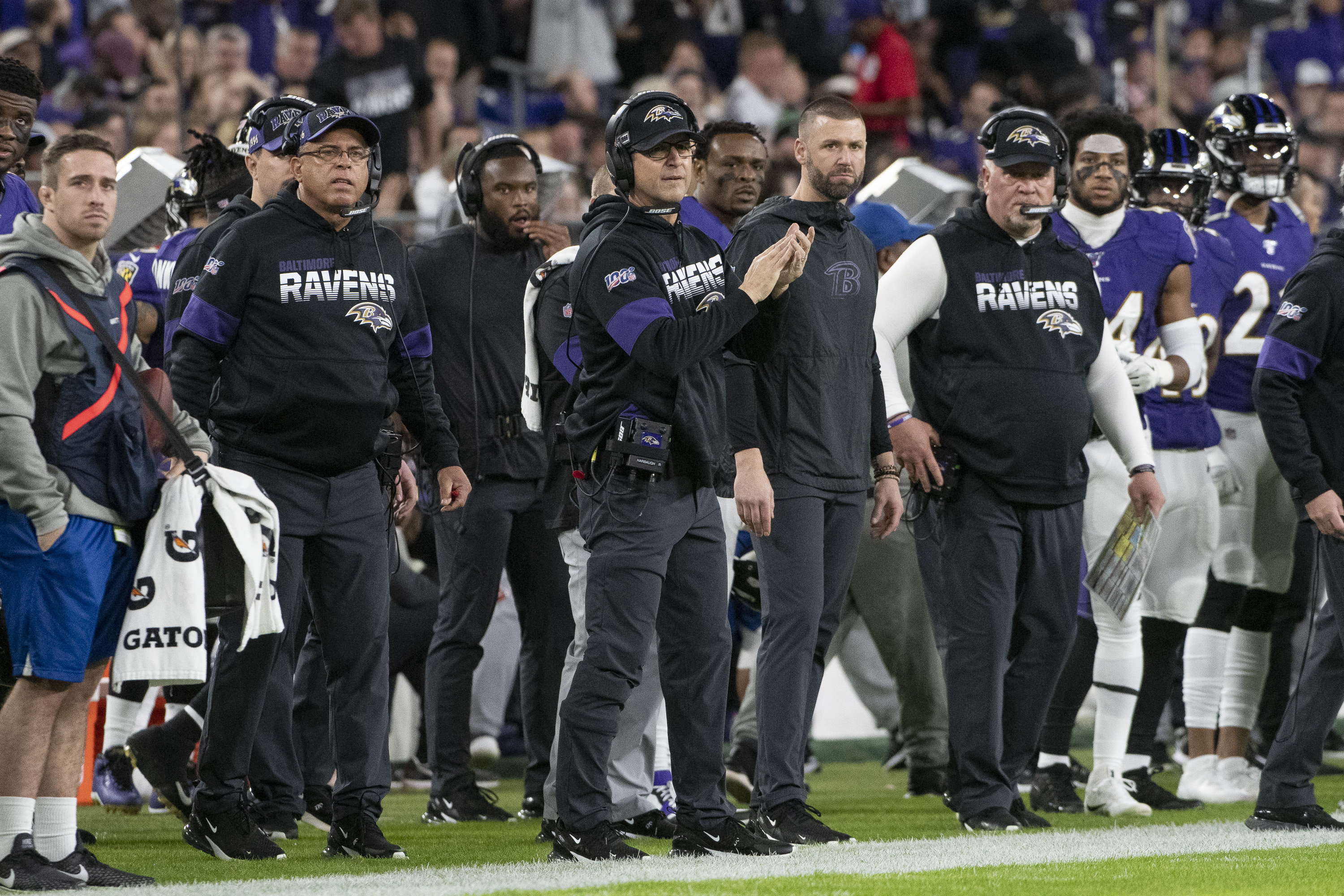 The Ravens sit at 6-3 with a stalled-out offense after setting the league on fire in 2019 with a 14-2 regular season record.  So it appears they have regressed, particularly on offense.  In reality, their defense and special teams have improved, so the onus is really upon the game plan for QB Lamar Jackson.  How do the coaches and especially OC Greg Roman address the obvious decline in Jackson’s and the offense’s overall numbers?

Of course a lot of it is about opponents’ adjustments.  They’ve learned to predict plays based on pre-snap keys. They’ve learned to lean their pass rush to the outside container, and they also spend a linebacker to spy on Jackson most plays.  Learn and live is their motto now when playing the Ravens.

Some of it is simply Lamar Jackson’s body doesn’t have that extra gear right now. Lingering groin and knee issues are the current reality for the kid, and the miracle escapes from pressure aren’t the rule anymore.

Earlier this week in Late for Work, pundits said the Ravens are “fighting for their postseason lives” after Sunday’s loss to the New England Patriots. We’ve seen plenty of polarizing takes as Baltimore sits at 6-3 heading into another tough matchup against the Tennessee Titans.

Could a team that came into the season as one of the Super Bowl favorites really be on the outside looking in at a playoff spot?  “Ten wins may not cut it this year,” NFL Network’s Andrew Siciliano said. “It might in the NFC, but I all but guarantee you it is not going to make it in the AFC. This is even with the expanded postseason to seven teams in each conference.”

If the season ended today, the Ravens would be the No. 7 seed, owning tiebreakers over the Titans and Cleveland Browns. There are six AFC teams sitting at 6-3 and Siciliano guarantees one or more could miss out on the postseason finishing 10-6. That’s only happened twice since the 1970 merger.

Penn Live’s Aaron Kasinitz dove into the numbers, and to quote Packers quarterback Aaron Rodgers, analytics are telling fans to take a deep breath and R-E-L-A-X for now.

“The Ravens’ loss to the Patriots at wet and windy Gillette Stadium altered the complexion of their 2020 season, but it didn’t cause their playoff chances to plummet,” Kasinitz wrote. “That’s what several algorithms show, anyway.”

ESPN’s Football Power Index, Football Outsiders’ Playoff Odds Reporter, and the New York Times’ Upshot Playoff Predictor all give the Ravens an 84 percent chance or better to make the playoffs.

There’s no question the Ravens have issues and concerns to address on both sides of the ball, but their path to the postseason is more than attainable. That’s even truer after games against the Titans and Pittsburgh Steelers.

Before the season, CBS Sports’ John Breech ranked the Ravens’ Week 15-17 stretch as the easiest of any team in the NFL. Of course, that’s before the season started and a lot of things have changed (such as injuries).

“It helps that the Ravens still have a star quarterback in Lamar Jackson, a high-ranking defense and one of the NFL’s easiest remaining schedules,” Kasinitz added. “After Baltimore plays the Titans and Steelers over the next two weeks, four of the team’s last five games will come against opponents with losing records.

“In their final three games, the Ravens are scheduled to play the Jaguars, Giants and Bengals, who have a combined 5-21-1 record. It’s a soft landing.”

But many fans and pro commentators doubt the ability of the Ravens’ offense to right the ship:

“The book is out on the Ravens,” NFL.com’s Dan Hanzus wrote. “They are a very good — sometimes great — team that doesn’t know how to dig itself out of a hole. This is not a trait usually attached to a champion. … Now three games behind the undefeated Steelers, the Ravens’ chances of repeating as division champions appear remote. More distressingly, they are one of six 6-3 teams in the AFC, which puts them in a dogfight for a playoff spot. Hold on tight.”

“It’s officially time to come to grips with the reality that the 2020 Ravens and the 2019 iteration that won 14 games and the AFC North are two different teams,” Bleacher Report added. “… And with the 6-3 Titans, 9-0 Steelers and 6-3 Browns all on the schedule over the next month, missing the postseason altogether is well within the realm of possibility if the Ravens don’t get going offensively.”

He could be right if you believe the Ravens are regressing.  On the other hand, maybe a little regression is the necessary step to a modified offense system which puts less stress on Lamar Jackson to be a hero.

HEALTH UPDATES: Defensive linemen Brandon Williams (ankle) and Calais Campbell (calf) did not practice Wednesday as the Ravens prepared to take on Derrick Henry and the Tennessee Titans.

Williams injured his ankle early in last week’s game in New England and did not return. Campbell injured his calf the week before in Indianapolis.

“Calais will be day-to-day here going forward with the calf; we’ll see about this week as we go,” Head Coach John Harbaugh said Monday. “Brandon Williams has an ankle; we’ll see as we go. Possibly a week, maybe more. It’ll be touch-and-go for Sunday.”

In good news, linebacker L.J. Fort (finger), who has missed the past two games, returned to practice as a full participant.