The Green Bay Packers entered Week 13 of the 1965 season just one half game behind the Baltimore Colts in the race for first place in the NFL’s Western Division. The two teams met in a fog shrouded Memorial Stadium for a game that would decide which team would qualify for the NFL Championship Game.

The Packers had beaten the Colts 20-17 in Week 2 in Milwaukee, so a win here would give Green Bay a big edge with just one more game left on the schedule.

The Colts were without Hall of Fame quarterback Johnny Unitas who had suffered a knee injury against Chicago the previous week. So, head coach Don Shula turned to backup Gary Cuozzo to lead his team.

Meanwhile, Packers coach Vince Lombardi decided to re-insert halfback Paul Hornung into the lineup after having “The Golden Boy” sit out the previous game due to a nagging injury. He would be replacing Elijah Pitts in the lineup. 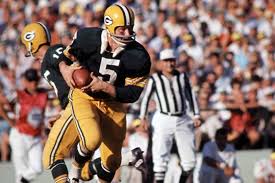 Hornung had been struggling all season and no longer seemed to be the player he was in his prime. The former Notre Dame star hadn’t gained more than 50 yards in a game all season and had only three total touchdowns through the first 12 games of the season.

But Hornung had a knack for coming up big in important games and this was no exception. Hornung emerged from the thick fog in Memorial Stadium to gain 176 total yards and to score five touchdowns to lead the Packers to a 42-27 victory over the Colts.

After Lou Michaels kicked a 14-yard field goal to give the Colts an early 3-0 lead, Hornung got to work. First, he ran for a 2-yard touchdown to put the Packers ahead 7-3. Then, he caught a 50-yard scoring pass from Bart Starr to make it 14-3 Packers.

The Colts got close in the second quarter on another Michaels field goal and a three-yard run by halfback Lenny Moore. That pulled them to within one point at 14-13.

Baltimore seemed poised to take the lead and had the ball at the Green Bay four when Packers linebacker Dave Robinson came up with a big play. Robinson leaped up high and barely intercepted a Cuozzo pass deep in Packers territory and returned the pick 87 yards all the way to the Colts 10. On the next play, Bart Starr found Boyd Dowler for a 10-yard touchdown toss and the Packers took a 21-13 lead into the locker room at halftime.

“I was up tight on John Mackey,” Robinson said after the game. “On the goal line, you have to stay up close. If you loosen up, they’ll drive you right out of there. I saw Cuozzo out of the corner of my eye, and when he threw, I dropped off Mackey and played the ball. It just wasn’t quite high enough.”

Hornung ran for two more scores in the third quarter, one on a nine-yard run that made it 28-13 Packers and then a three-yard dash that increased the Green Bay advantage to 35-13.

In the fourth quarter, Cuozzo made the game close. He led the Colts downfield twice for touchdown drives. Jerry Hill ran in from one-yard out to make it 35-20 and then Cuozzo connected with Hall of Fame receiver Raymond Berry on a five-yard touchdown pass to cut the Packers lead to 35-27.

But Hornung and the Packers answered back. Starr found his halfback about 15 yards downfield but “The Golden Boy” kept running and ran the remaining 50 yards for his fifth touchdown of the game. The Packers held on for a 42-27 victory.

Hornung finished the game with 15 rushes for 61 yards and three scores. He also caught two passes for 115 yards and two more scores. The five touchdowns were a Packers franchise record. Unfortunately for Hornung, Bears halfback Gale Sayers scored six touchdowns that same day against San Francisco so Hornung’s accomplishments got overshadowed a bit in the national press.

Starr finished the game 10-of-17 for 222 yards and three touchdowns. Jim Taylor led the Packers rushing attack with 66 yards on 17 carries and added 39 yards on a pair of receptions. The Packers picked off Cuozzo three times with Tom Brown and Bob Jeter also making interceptions in addition to Robinson.

Lombardi admitted after the game that starting Hornung paid off. “It was a hunch—but Hornung’s a pressure player,” Lombardi said. He certainly came through big time on this important occasion.

Hornung credited his performance to being well rested. “I got my legs back for the first time,” he told reporters. “I guess all that rest did it.”

With the win, the Packers took over first place in the Western Division, but they stumbled the following week and tied the 49ers 24-24 in San Francisco. As a result, the Colts and Packers both finished with 10-3-1 records and had to meet a third time in a one-game playoff to see who would face the Browns in the NFL Championship Game. The Packers emerged with a 13-10 overtime win behind backup quarterback Zeke Bratkowski and a controversial kick by Don Chandler.

The Packers went on to beat the Browns 23-12 behind the running of Hornung (105 yards) and Taylor (96 yards) to win Lombardi’s third title in five years.

Hornung would miss most of the 1966 season due to a pinched nerve in his neck. This five-touchdown performance and the 100-plus yard performance in the title game win over Cleveland were his last big games of his Hall of Fame career.

Lombardi thought that Hornung’s ability to find the end zone is what made him a special player. “In the middle of the field he may be only slightly better than an average ballplayer,” Lombardi once said, “but inside the 20-yard line he is one of the greatest I have ever seen. He smells that goal line.”

On this day, he crossed the goal line five times and led the Packers to a critical win over the Colts.