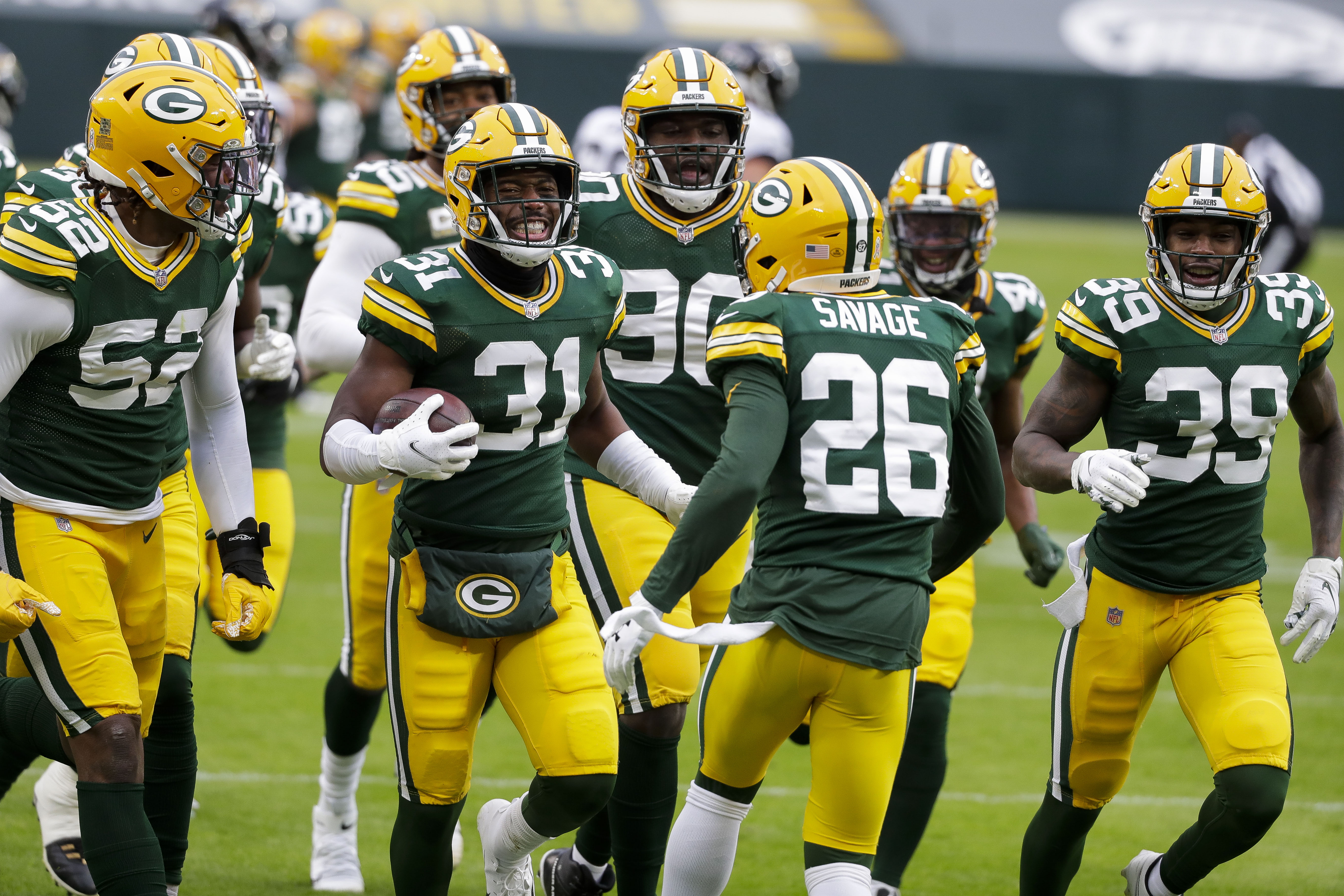 The Green Bay Packers head to Indianapolis to face the Colts in an interconference game Sunday afternoon. The Packers are 7-2 after edging the Jaguars last Sunday 24-20. The Colts are 6-3 and are in first place in the AFC South after defeating the Tennessee Titans 34-17 last Thursday on the road.

The Colts lead the all-time series between these two teams 22-20-1 including the last two meetings in 2012 and 2016. The Packers won the only playoff meeting back in 1965 13-10 in overtime when the two teams met in an NFL Western Conference playoff.

The Colts are good at getting pressure on opposing quarterbacks and they have nine different players with at least half a sack this season. Indy’s defense will blitz a host of different people from different parts of the field so the Packers offensive line needs to expect the unexpected and adjust as the blitz packages change.

The Packers will not have to face Denico Autry who leads the Colts with six sacks as he has been placed on the Covid-19 reserve list and will not play this Sunday. Look for the Indy defense to create different blitzes to try to compensate for this loss as neither Al-Quadin Muhammad nor Ben Banogu are as effective at pressuring opposing quarterbacks as Autry.

The Packers offensive line needs to protect Aaron Rodgers and give him enough time to find receivers downfield. Having David Bakhtiari back at left tackle for the second straight week will help the offensive line’s continuity and pass blocking skill level.

Right guard Lucas Patrick will have his hands full with DeForest Buckner and may need some help from center Corey Linsley. Buckner really hurt the Packers in both meetings with the 49ers last year and the offensive line needs to prevent him from disrupting things along the line.

The Colts run defense is ranked fourth in the league in yards allowed per game. Even if the Packers are not gaining large chunks of yardage on the ground, they need to continue to run enough to make the Indianapolis defense bite on the play action pass.

The Packers ground game hasn’t been as sharp the past two games and will need to be more productive against the Colts.

Aaron Jones will be playing his third game since returning from injury and the Packers will need to get him involved. Jamaal Williams is another player who needs to be effective especially running between the tackles.

The Indianapolis has active linebackers and a strong defensive line. The Packers cannot afford to abandon the run or the offense will struggle to sustain the long drives they will need to defeat the Colts. If the running game can be effective, the Packers have a much better chance of moving the ball consistently.

3. Get Pressure On Philip Rivers

The Packers pass rush was more effective late in the Jaguars game and it helped clinch the win by shutting down the Jags in the final two drives. They will need to put pressure on Rivers who tends to throw quicker, shorter passes to help neutralize the pass rush.

Rivers has enjoyed an excellent career but at age 38, he is not very mobile. The Colts offensive line has done a good job of protecting their quarterbacks and have allowed only nine sacks in nine games.

The Packers need big games from Za’Darius Smith and some of their other pass rushers. Rashan Gary had a strong game against Jacksonville and Mike Pettine will need him to repeat that performance on Sunday in Indianapolis. Preston Smith has shown signs of improvement in recent weeks but still needs to be more consistent. Kenny Clark has only one pressure all season and has yet to register a sack. He is also showing signs of returning to form after suffering an early-season injury. Kingsley Keke can also provide pressure and has started to show a little more spark in the past two games.

4. Slow Down the Colts Receivers

The Packers hope to get both of their starting cornerbacks, Jaire Alexander and Kevin King, back in the lineup this week. Alexander has missed the last game and a half due to a concussion. King has been out of the lineup since Week 4 against Atlanta.

The Colts like to spread the ball around to a large group of talented receivers. Having Alexander and King back will help contain the Indianapolis offense.

The trio of T.Y. Hilton, Zach Pascal and Michael Pittman, Jr. will be tough to stop. Again, the Colts prefer the short passing game so the Packers defense will have to be patient.

Running back Nyheim Hines leads all Colts receivers with 33 catches thus far this season. The Packers will need to cover him out of the backfield and not let him gain much after the catch.

Chandon Sullivan will have a big role to play as the Packers slot corner. The Packers and Colts both have depth here and the winner of this position will be key to slowing down the Indianapolis offense which often struggles to run the football.

5. Spread the Ball Around on Offense

The Packers receiving situation is a big question mark entering Sunday’s game. Davante Adams hurt his ankle against the Jaguars and did not participate in Thursday’s practice. He did return to practice Friday and should be good to go although it’s not certain he’ll be at full strength this week.

The Packers activated WR2 Allen Lazard off the injured reserve this week, but Lazard hasn’t played since the Packers Week 3 win in New Orleans and his status for Sunday is unclear. If Lazard does play, he may be on a pitch count as he plays himself back into shape.

Marquez Valdes-Scantling had a career day last week and will need to come up big again, especially if Adams and/or Lazard are limited. The Colts don’t give up many splash plays, but MVS is capable of creating a few and that could change the game around.

If Adams or Lazard can’t go, the Packers will need more from some of their depth receivers.

Tight ends Robert Tonyan and Jace Sternberger could also be a big part of the offense. RBs Jamaal Williams and Aaron Jones are reliable check down targets who can pick up key first downs.

The Packers need to keep the chains moving and spreading the ball around will be important. The Colts pass defense is ranked 2nd in the league and is giving up fewer than 200 yards per game. Rodgers will have to be patient and spread the ball around while still taking the occasional shot downfield.

Green Bay’s special teams have been hurting lately and they will need to step up their game if they hope to win the field position battle in what promises to be a tight game.

Last week, the Packers allowed a long punt return for a touchdown and it almost cost them the game. Kick and punt coverage need to be better or the Colts will have excellent starting field position.

The Packers will also likely be without return specialist Tyler Ervin on Sunday. Ervin is dealing with rib and wrist injuries and the team has no strong replacement for him on returns. Darrius Shepherd and Josh Jackson have been getting reps when Ervin was unable to play but neither is any kind of threat to break a long return or make a play.

The Packers return specialists had trouble picking up punts in the wind last week at Lambeau Field but this should not be an issue indoors in Indianapolis. That cost the Pack good field position on at least three occasions.

The Packers have also had a punt blocked against Houston and cannot afford a repeat of that poor performance.

Green Bay’s special teams must play better on Sunday because that could be the difference in a close game.

This may be the toughest game the Packers have remaining on their schedule and it presents a measuring stick for a team that still has a lot to prove.

The Packers strength is their offense while the Colts defense is among the best in the league. This should be an interesting showdown. How Matt LaFleur game plans and makes adjustments will be keys to Green Bay’s success.

Defensively, Pettine wants to force teams to make long drives and earn every point while the Colts offense tries to create those long drives. Indianapolis is poor in the red zone and if they settle for field goals instead of touchdowns, the Packers should find just enough to eke out a close win.