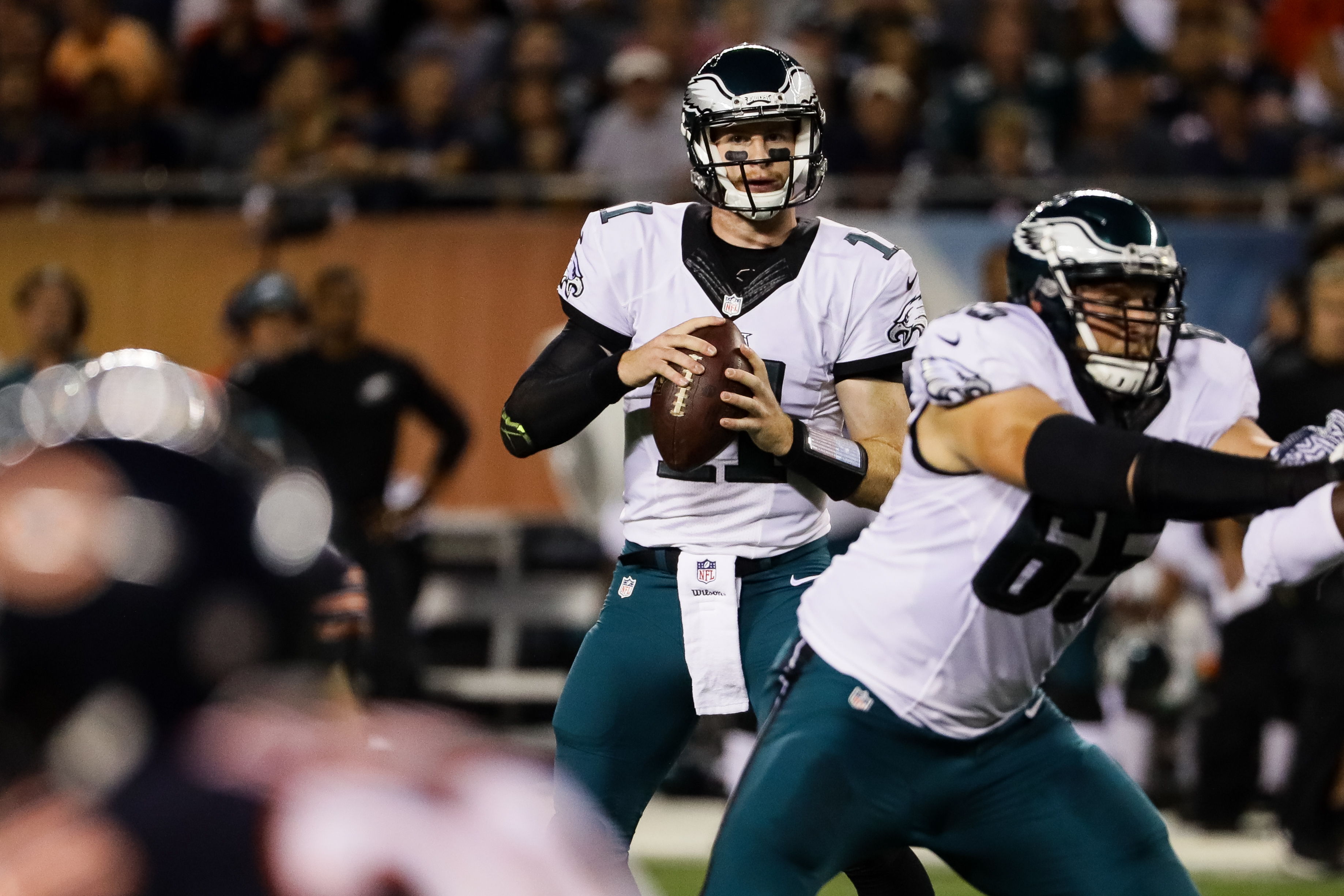 This one goes in the “team effort loss” file, and it looks like the current group has lost touch with recent previous seasons’ winning mojo.

The media and many fans will pile on Carson Wentz and Doug Pederson for another disappointing loss, and for their need to scapegoat someone for taking away the fun of pulling for a good team.

Fact is, the entire team despite a fairly strong effort by the defense had many hiccups resulting in constant new life for the overachieving Browns…and ultimately a 3-6-1 record for the Eagles coming out of Cleveland.

Mike Kaye of NJ.com called the overall team effort “as bad as it gets.” EYE wouldn’t go that far, remembering many Eagles alumni teams which had far less talent and much greater levels of failure.

But Kaye could not ignore the obvious:

“A trio of brutal turnovers and a safety in rainy weather sank the Eagles during a 22-17 loss to the Browns on Sunday at FirstEnergy Stadium.”

Yeah, that’s the way this season will probably be summarized in the history books— the Eagles hung around in a lot of games, but lost most of them due to self-inflicted wounds with mistakes in all phases.

“Wentz is struggling, the offensive line is finding new ways to fall apart on a weekly basis and the overall vibe of the team is as bad as it’s been during the Doug Pederson era.”

Wentz completed his first four passes for 73 yards. However, on his fifth pass of the game, Wentz missed Jalen Reagor streaking down the field wide open. Instead of targeting the first-round pick, Wentz attempted a swing pass to running back Miles Sanders. Browns cornerback Denzel Ward came free on a blitz after Richard Rodgers missed a pickup as he made the throw. The ball wobbled in the air and was picked off by Browns linebacker Sione Takitaki, who returned the ball for a touchdown.

Following Wentz’s 13th interception of the season — his league-leading 17th turnover overall — the quarterback crumbled for the rest of the first half. The Eagles headed into halftime with a seven-point deficit because of the pick-six, which was the only Browns score of the first half.

Wentz was able to bounce a bit in the second half. After a fumble recovery by the defense, Wentz hit Rodgers for a 19-yard touchdown on the very next play. Wentz never actually found his footing fully, as he continued to struggle behind a porous offensive line. He took a sack in the end zone that led to a safety in the third quarter. Wentz’s two turnovers gave the Browns nine points.

Wentz refused to throw the ball away, despite facing regular pressure and playing in rainy conditions. While the Eagles’ called some plays that fit his skill set, Wentz just couldn’t put things together. He threw another pick in the fourth quarter.

Wentz completed 21-of-35 passes for 235 yards, two touchdowns and two interceptions. He got lucky on a pair of would-be interceptions as well.

Wentz was sacked five times, got hurried and hit numerous times. His protection was a mess.

Miles Sanders came out of the gate looking like a superstar. On the Eagles’ opening drive, he ran the ball six times for 37 yards. However, on that sixth carry, he coughed up the ball within the Cleveland five-yard line, costing the Eagles early points. The Eagles went into halftime without points, largely because of Sanders’ fumble, which sunk the early momentum for the offense.

Sanders, who decided to play without gloves, coughed up the ball after holding the ball in a loose position throughout the first drive. While he gained ground throughout the rest of game and finished with 16 carries for 66 yards, his first series fumble was inexcusable and cost the Eagles the opportunity for an early lead in a game they controlled, for the most part.

The Eagles came into the game with a major directive: stop the Browns running game. Not only did the Eagles stifle Nick Chubb and Kareem Hunt in the rain, Philadelphia’s front seven dominated in the trenches. Chubb and Hunt were held to just 126 rushing yards and a touchdown after gaining 230 yards on the ground against the Houston Texans in Week 10. The defense eventually wore down, but for the most part, did its job.

Linebacker Alex Singleton, in particular, was a menace against the Browns’ rushing attack, producing 11 stops by himself. On the second series of the game, Singleton had three impressive stops. He also recovered the Eagles’ first turnover of the game, collecting a sack-strip by defensive tackle Fletcher Cox in the third quarter. The turnover led to a touchdown connection between Wentz and tight end Richard Rodgers.

Overall, the Eagles forced a turnover, produced three sacks and held the Browns’ offense to 13 points. While the unit had late-game hiccups, Jim Schwartz’s defense delivered on its mission statement on Sunday.

It was a rough day for Avonte Maddox in the rain. He has consistently struggled as the Eagles’ No. 2 cornerback and the Browns’ second series really highlighted his pitfalls. First, Maddox gave up a 43-yard completion to Browns wide receiver Rashad Higgins and then immediately got called for a pretty blatant pass interference penalty in the end zone. Maddox is only 5-foot-9 and 183 pounds and he’s been overmatched by size repeatedly this year. Against the Browns, Maddox was beaten deep as well, which is an even worse look. The Eagles really need to consider playing undrafted rookie Michael Jacquet on the outside. In turn, the Eagles could play Maddox at his natural slot corner position.

Cleveland’s Kareem Hunt hurdled Jaylen Mills on a sensational touchdown run, Olivier Vernon made up for Myles Garrett’s absence due to COVID-19 by getting three sacks and a safety, and Cleveland stayed firmly in the playoff picture.

Hunt’s leaping 5-yard score came shortly after a dazzling 54-yard run by Nick Chubb as the Browns (7-3) finally found traction in their running game in a constant downpour.

“It was like he never stopped going up,” Browns quarterback Baker Mayfield said of Hunt, comparing his gravity-defying move to something out of a video game. “He jumped and just kept levitating. It was like a Super Mario double bounce.”

Cleveland also got a 50-yard interception return TD in the first half by second-year linebacker Sione Takitaki, and the Browns constantly harassed Eagles quarterback Carson Wentz despite playing without Garrett, the NFL’s sacks leader.  “I’m smiling and crying,” Garrett posted on Twitter. “I’m so proud of the DL.”

Chubb and Hunt, who give Cleveland a devastating 1-2 punch, combined on the game’s biggest sequence in the fourth quarter.

After the Eagles closed within 12-10 on Jake Elliott’s 43-yard field goal, Hunt went on his long run, which included him flattening defensive end Joe Ostman with a stiff arm.

Two plays later, Hunt, who had just 11 yards on 13 carries, swept right and jumped over an unsuspecting Mills near the goal line to put the Browns up 19-10.

“We have the best backfield in the league,” Mayfield said. “There’s no question. I love watching those guys run.”

It was another tough day for Wentz and the Eagles, plagued by inconsistency and injuries all season. Wentz made a bad choice on his pick to Takitaki, threw a late interception — his 14th this season — and was sacked five times.

“We are where we are because of the mistakes we’re making, coaches and players,” Eagles coach Doug Pederson said. “This is a test to see who’s in, who’s out. That’s where we are. It’s a matter of challenging the leadership of the football team, challenging the guys to keep things together. We still have an opportunity in our division.”

Vernon, who plays on the opposite side from Garrett, gave the Browns a 12-7 lead in the third quarter when he brought down Wentz in the end zone.

Wentz’s hesitation helped set up Takitaki’s easy TD. Philly’s quarterback ignored an open receiver and instead tried to swing the ball to Miles Sanders as he was hit by blitzing cornerback Denzel Ward.

INJURIES—  starting center Jason Kelce hurt his elbow in the first half, and his loss forced the Eagles to turn to undrafted rookie Luke Juriga, the 12th lineman used this season. Kelce played the second half in a large brace.

Left tackle Lane Johnson hurt his shoulder in the second half.

DT Fletcher Cox left with an apparent leg injury in the fourth. … DE Derek Barnett injured his knee, but came back and blocked a field-goal attempt. … CB Cre’Von LeBlanc rolled his ankle in the third quarter.