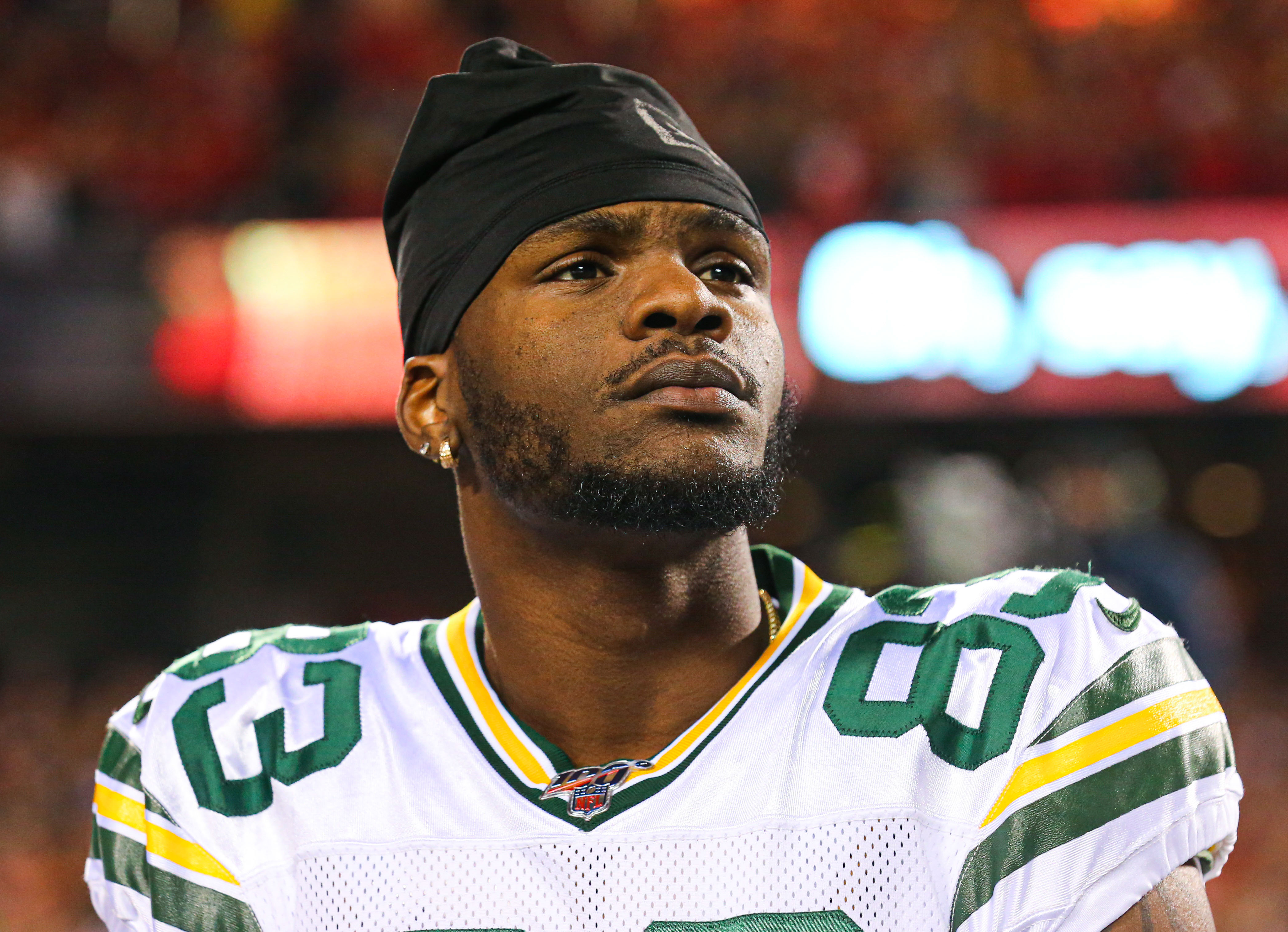 Packers wide receiver Marquez Valdes-Scantling revealed that he had received death threats after the Packers 34-31 overtime loss to the Colts this past Sunday. MVS lost a fumble in overtime that set up the winning field goal for Indianapolis. He made the announcement about the death threats via Twitter.

Death threats over a football game? Jesus you people need help. It’s actually sick. I’m good. My team got my back. ✊🏾

His teammates were quick to announce that they MVS’ back.

Till the wheels fall off fam 💯❤️ https://t.co/BkNbjjF2vM

Even before the knowledge of the death threats became public, MVS’ teammates and coaches were busy voicing support for the third-year receiver after his fumble.

“I know he’s really hurting right now,” head coach Matt LaFleur said in his post-game press conference. “He made so many plays for us and not only in the pass game but in the run game, stuff that you guys probably don’t even notice that we’re not getting the yardage that we get if he’s not blocking his ass off.”

A reporter asked LaFleur how he can live with MVS. “I’ve got more confidence in him now than probably ever,” LaFleur responded. “I think he continues to get better each and every day. Every time we go out there, he’s providing big plays.”

Valdes-Scantling was a big reason that the Packers were able to force overtime in Indianapolis. He made some great blocks on runs and passing plays that helped keep the offense clicking in the first half. MVS also drew a crucial pass interference call late in the second quarter that resulted in a 51-yard gain for the Packers and helped set up Jamaal Williams’ touchdown catch just one play later. That gave the Pack a 28-14 advantage at halftime.

In the fourth quarter with the Packers facing a crucial 3rd-and-10 situation on their own six-yard line, MVS caught a 47-yard bomb from Rodgers where he used his speed to get open deep over the middle. Rodgers delivered a well-placed pass that Valdes-Scantling caught and that helped get the Packers game-tying drive going. The Packers eventually kicked a field goal and sent the game into overtime.

But in overtime, MVS fumbled after making a catch on a short pass in the flat from Rodgers. The Colts were already in field goal range when they recovered the ball and the game was over just a few plays later.

“I have a lot of love for Marquez,” Rodgers told reporters after the game. “I see the guy every single day, see how much he cares about it. It happens, unfortunately. A lot of it is fundamentals, carrying the ball, but I’ve had my fair share of fumbles. It was just bad timing, obviously. … But that stuff happens. He made a big play at the end of regulation to kind of get us going on third-and-10. Disappointed for him, disappointed for us.”

Ironically, it was the first time Valdes-Scantling had fumbled in his NFL career. The turnover was the fourth for the Packers in this game and the third fumble they lost during the contest.

Valdes-Scantling is a player who inspires mixed emotions for many fans. His speed and talent are obvious to any observer. But he also has dropped at least five passes this year and his inconsistency is frustrating at times.

But regardless of how well or how poorly he plays, no NFL player deserves death threats for making a mistake on the field.

MVS addressed the issue with reporters on Monday.

“I wasn’t fearful for my life or anything, that’s never the case, it was more so the fact that to get people to understand we’re humans too, not just some number on a jersey that we’re people first,” he explained. “I wasn’t concerned for my life or fearful in that regard, it was just to show people that they can’t be disgusting to other people around the world.”

“Nobody really has access to me outside of social media,” he continued. “Social media gives cowards the right to say whatever they want with no consequences. So, I guess that’s one of those things with this profession we’re in, you’ve got to take it for what it is. Don’t let it affect you. It doesn’t affect me. People can say what they want. As long as the people in this building and our family, they all care about me, that’s what matters.”

Offensive lineman Elgton Jenkins also defended his teammate when he spoke to reporters Monday. “I know he always comes to practice giving us his all,” Jenkins said. “Things didn’t go the way we wanted them to go at the end of the game, but I know ‘Quez’ is a great guy, a great player, a great teammate and he always gives his all to help the team win at the end of the day.”

With his speed and work ethic, Valdes-Scantling has carved out a role for himself as the team’s third receiver. He provides the Packers offense with the ability to stretch the field that no one else on the roster can provide.

His coach sees the progress MVS is making this season. “I think he’s playing with a lot more confidence, he’s more decisive,” LaFleur said. “I see him catching the ball with his strong hands, and he’s had his moments just like everybody else has. That’s football. This is a tough game for tough-minded men and you have to be mentally strong and I think that’s where he’s improved the most.”

And the end of the day, fans can like or dislike Marquez Valdes-Scantling the football player. They can admire his skills, like or dislike his style, be thrilled or frustrated by the results he gets on the field. But it is important for fans never to forget that those who play this game we love are human beings with parents, siblings, loved ones, children and friends. They are very skilled at playing football, but just like the rest of us, they are not perfect and will make mistakes sometimes. The same people who make mistakes that frustrate us can a minute later, thrill us with an outstanding play that takes our breath away. And death threats are just way out of bounds.

The key for MVS on the field is how he responds to this difficult moment. “Despite maybe having a bad play, he’s able to bounce back,” LaFleur said. “And I would expect nothing more than that moving forward from him.”