The Green Bay Packers enjoyed a thrilling 1989 season, improving from a terrible 4-12-0 record the previous season to a solid 10-6-0 mark under second-year head coach Lindy Infante. They were also an exciting team, playing nine game that were decided by three points or less that season. The “Cardiac Pack” went 6-3 in those games.

The Packers were 4-4-0 at midseason heading into a big Week 9 matchup against the 5-3-0 Bears who entered the game tied for first place with the Vikings. Winning this game would put the upstart Packers in the thick of the NFC Central Division title, while a loss would put them behind both Minnesota and Chicago and all but end their title hopes.

There was even more to the game than the immediate playoff race. The Bears had won the last five division titles and the Packers hadn’t beaten the Bears in a long time. Their last win came on Rich Campbell’s desperation, last minute 43-yard touchdown pass to Phil Epps which gave the Pack a 20-14 win over the Bears back in 1984.

Since then, Mike Ditka’s team had beaten the Packers eight straight times. Some of those losses were embarrassing like when Ditka had 300-plus pound rookie William “The Refrigerator” Perry run for a touchdown on Monday Night Football or when Packers defensive tackle Charles Martin was ejected from a 1986 game for body slamming Chicago quarterback Jim McMahon after the Packers intercepted a pass. Martin had a towel with a “hit list” of Bears he wanted to take out of the game. The Bears hadn’t just beaten the Packers eight straight times, they had embarrassed them.

Losing badly to the Bears was becoming a painful reminder of just how low the Packers had fallen in recent seasons. If the Packers could beat Chicago, they could throw off the yoke of being losers and prove they were not the same old Packers who had not had a winning record in a non-strike season in more than a decade.

The Packers got off to a good start and took an early 7-0 lead on a 24-yard touchdown pass from quarterback Don Majkowski to tight end Clint Didier. The Bears answered with a 25-yard field goal by Kevin Butler and the Packers held a 7-3 lead at halftime.

The Bears kicked another field goal in the third quarter to pull to within one point and then took the lead later in the quarter on a two-yard run by fullback Brad Muster. The Packers now trailed 13-7.

The Packers had their chances to get back into the game. Midway through the fourth quarter, Majkowski had the Packers deep in Chicago territory but linebacker Ron Rivera intercepted “The Majik Man” and ended the threat.

“I remember coming off the field after the interception and Lindy [Infante] grabbed me by the face mask and said, ‘Keep your head up because you’re still going to be the hero,” Majkowski recalled.

With 4:44 left in the game, Majkowski got his chance when the Packers got the ball back at their own 27-yard line. The Packers steadily moved the ball downfield. They had the ball at the Bears 7 with 1:26 left to play. On first-and-10, Majkowski was sacked and fumbled the ball but Packers center Blair Bush fell on the loose ball at the 14. Two plays later, the Pack faced a fourth-and-goal from the 14 and there were just 41 seconds left on the clock. 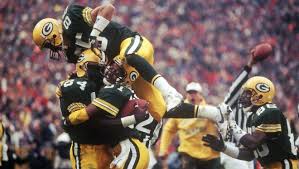 The Packers were expecting the Bears to blitz and play man coverage on this final play. Instead, they rushed only four and fell back into a Cover 2 zone.

“I immediately aborted the play,” Majkowski said, “and said I’ve got to buy some time and let my receivers do their thing, and let the scramble drill, which we practiced a lot, take effect.”

“The Majik Man” scrambled to his right as the pass rush started to converge. He was able to release the ball back toward the middle of the end zone where wide receiver Sterling Sharpe had found a brief opening between three Bears defenders. Sharpe caught the ball and the referee signaled touchdown. The crowd and the Packers players went wild.

But their joy was short-lived. A penalty flag was thrown because one of the officials had ruled that Majkowski was across the line of scrimmage when he threw the ball to Sharpe.

The rules were different back in 1989. The rule then was that the ball had to be behind the line of scrimmage when it was released. The location of the quarterback’s body was not a factor.

The replay booth signaled down that they wanted to review the play. On the television broadcast, it was difficult to determine whether the ball was at or behind the 14-yard line when it was released. The replays were not timed then and both benches and the sellout crowd at Lambeau Field waited more than four minutes for a decision.

Finally, the referee announced that the call was overturned and that the Packers touchdown counted. Bedlam ensued inside the stadium. Chris Jacke kicked the extra point and the Packers had a 14-13 lead. That was the final score.

“The place erupted,” Majkowski recalled. “Lambeau Field just erupted, the players erupted and everyone went crazy. And it was the first time in my athletic career that I was crying from tears of joy.”

“I’m overwhelmed with emotion,” Packers linebacker Brian Noble said in the victorious Packers locker room. “Guys were crying. Guys were screaming. I was crying and screaming. I’ve been here a long time now. We have been through some games with these guys that have come down to the wire like this one did. Somehow, we always found ourselves on the short end of the stick. I guarantee you right now there’s a party in Green Bay tonight.”

The Packers eight-game losing streak to the Bears, the longest in the history of this fabled rivalry, was over. The Packers went on to finish the season with a 10-6 record which tied them with the Vikings for first place in the NFC Central Division. The Vikings won the tie-breaker, however, and the Packers missed the playoffs. The Bears, however, never recovered from this lost. They went 1-6 down the stretch and finished the season 6-10-0.

“Even though we missed the playoffs, it was still a magical year,” Majkowski said. “It brought back a lot of excitement to the city of Green Bay. Our team came into its own that season, but what I remember most is beating the Bears twice that year. I was in the right place at the right time.”