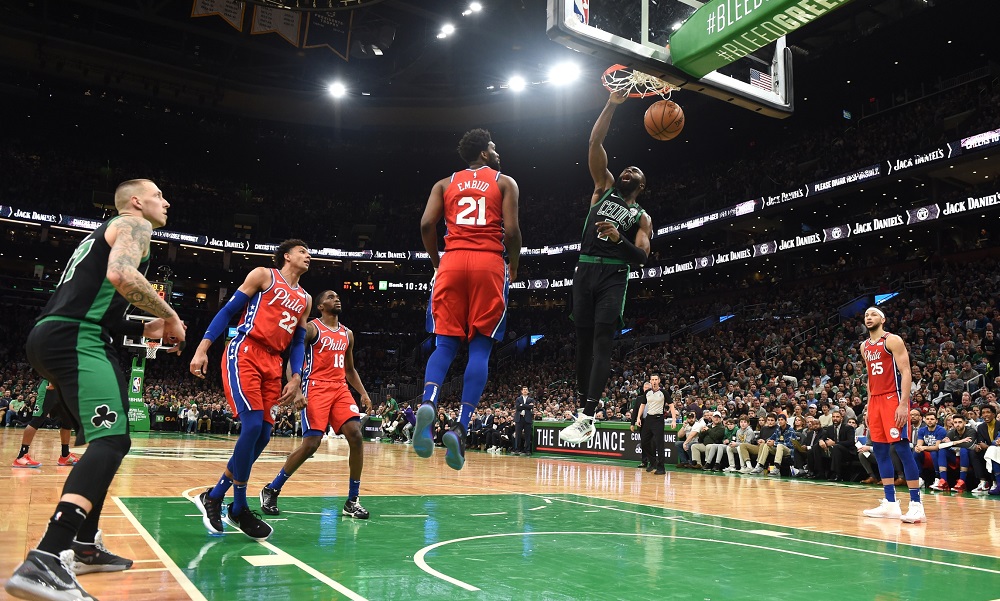 The Celtics will host the Brooklyn Nets three days later on Dec. 18 at 7:30 p.m. That game could mark Kyrie Irving’s first time back playing in TD Garden since leaving the Celtics as a free agent after the 2018-19 season.

I haven’t counted how many shopping days remain until Christmas, but I do know this: 17 days from now, the Celtics will take the court for their first preseason game of the 2020-21 season.

It was only a couple of months ago that the Celtics were eliminated from the 2020 playoffs. Now, after a very brief offseason, they’re about to be right back out there in this totally abnormal year. NBA teams can start small group workouts on December 1 and full training camps on December 4. The abbreviated preseason will be completed in time for the regular season to begin December 22.

All of that assumes the NBA can pull off the season without too much COVID-19 disruption. I’ve seen little discussion of that factor. It’s possible that, because the Disney World bubble was a smashing success, we’re taking it for granted.

This new season, however, will be out in the real world, where COVID has staged a dangerous fourth-quarter comeback. Case numbers are rising almost daily, and it’s almost impossible to imagine the NBA won’t be affected.

As an example, look at the NFL, which has attempted to run its normal season, except without fans, or in some cities with small numbers of fans spread out in large stadiums. The league has generally kept to its schedule, but there have been several games rescheduled because of clusters of positive tests. A few teams have had to close down their training facilities and suspend practices for days at a time. Numerous players have also been forced to miss games, including the reigning MVP (Lamar Jackson) this week.

NFL teams do have four times as many personnel as NBA squads, but they play just once a week. It seems inevitable that NBA teams with three or four games each week will be affected just as much.

So, we’ll wait and see how it goes. And if you need something to pump you up about the Celtics’ chances for Banner 18, be aware that the NBA website has named Boston as one of four legit title contenders in the East.

2020-21 outlook: Danny Ainge’s restraint this offseason is as impressive as it is surprising, given his usual preference for tinkering with the roster. But the Celtics stumbled onto something in the bubble playing off the strengths of Jayson Tatum, Jaylen Brown, Kemba Walker, Marcus Smart and Daniel Theis. A physical force like Thompson adds an element of defensive toughness and rebounding that Enes Kanter simply did not. Teague is subtle improvement as a backup. And don’t sleep on Grant Williams, who acquitted himself quite well in the bubble. The continued development of Carson Edwards, Robert Williams and Romeo Langford is critical for depth purposes. Adding a shooter with the size and versatility of Nesmith adds even more depth. The Celtics will still have some size and depth concerns to address, but there’s no denying the potency of their core group and what they’ve already accomplished as Tatum and Brown enter the primes of their careers.

The other East teams spotlighted were Milwaukee, Miami and Brooklyn.

On Page 2: No news about the sign-and-trade

As of this morning, there had been no announcements or reports about any movement on the Hayward-to-Charlotte front. But there was more speculation.

If the sides figure out a sign-and-trade, Charlotte hypothetically could absorb Hayward’s salary without needing to immediately waive Batum. Or, if the Hornets wish to part ways with Batum anyway, the sign-and-trade would still make sense because they would likely receive draft capital from the Celtics for their troubles.

The Celtics probably would dip into their collection of second-round picks (they own eight over the next five years) to coax Charlotte. In return, they’d be in position to receive a massive trade exception of nearly $30 million.

The Celtics would have one year to use the trade exception, which would allow them to take in that amount of salary in a deal without sending out matching salary in return. That would be especially useful on this roster, which has no aging veterans with expiring contracts to dangle.

It’s also possible that a third team could emerge that is willing to absorb Batum’s deal in exchange for extra draft capital. Expect a resolution within a few days.

Globe: Thoughts on a Celtics-Hornets Gordon Hayward deal, and other NBA matters

One thing hasn’t changed: Social media users mocked Hayward and his wife, this time on Thanksgiving.

That was the worst turkey disaster since Les Nessman reported for WRKP in Cincinnati. With Hayward’s new $120 million deal, maybe next time he’ll hire a caterer.

(Here’s a promise: Once the sign-and-trade is complete, there will be no further mention of the Haywards in this space.)

Back to the Celtics, it was bad news for sure when Hayward walked, but they still have heaps of talent.

Here’s the real key to whether Boston is better this season: Tatum and Brown. If those two continue their ascents, then the Celtics have a legitimate chance to compete for a title. A lot of things would still have to break right, including better long-term health for Walker and Langford, and development from recent draft picks including Robert Williams. […]

If Boston’s heavy lifting is complete this offseason, are the Celtics better than they were after their bubble exit? Probably not. But being better in December doesn’t win titles. The 2021 playoff Celtics could be better than the 2020 version but it’s going to take time and effort.

NBC Sports Boston: Forsberg: Did the Celtics get better this offseason?

It can’t be said enough that the Celtics need to stay healthy. With the brutal injury luck they’ve had the past three seasons, they certainly deserve some good luck.

And, finally… The Teague factor

With Gordon Hayward gone and Walker potentially limited early in the season, the Celtics needed a veteran hand in the backcourt. Rookie Payton Pritchard should get a shot at playing time, but there’s no promise he will be ready for it, especially given the lack of summer league this year. Teague is a well-known commodity. He can take on a bigger role if Walker needs to miss time, then guide the second unit once Walker’s ready for a full slate of minutes.

For Boston, having that security blanket could be a big deal. The rapid offseason was bad news for Walker, who could have used more time off to strengthen his knee. The Celtics have already indicated they plan to exercise caution with the All-Star during training camp and beyond. Marcus Smart can start at point guard if Walker needs to miss time during the regular season, but Boston will have space for another ball-handler in the rotation. Teague will give them another downhill threat. He will bring experience to what was a very young bench last season.

The Athletic: Three ways Jeff Teague can help Celtics — and three concerns about his arrival

The Celtics historically have trouble with crafty veteran point guards. DJ Augustin, Andre Miller, Jerryd Bayless, and JJ Berea come quickly to mind, and there are many more.

Jeff Teague is like those guys. He has always seemed to perform well against Boston. Now that he’ll be wearing green and white, he’d better not forget how to play.

Teague is definitely an upgrade over Brad Wanamaker, who was capable but not an 11-year NBA pro. And Teague has something left in the tank, The Athletic article concludes:

… nobody I spoke to sounded willing to write off Teague. He has always been able to get into the paint and make things happen. The Celtics won’t need him to run their offense all the time, but a little extra playmaking juice could go a long way in the second unit.

Celtics Wire: Jaylen Brown pens a message to his mom for her role in his activism  |  ‘It’s a dream to be here’: Aaron Nesmith on joining the Celtics