Who:  The Tennessee Titans vs the Indianapolis Colts

Why? Because this virus stuff has spiraled out of control, and it’s not going to get any better.

1: The Ravens-Steelers game – postponed Thursday – will be played Monday 11/30 at 5 PM eastern. Maybe. As of right now, the Ravens have 18 players on the Covid-19 list, and get this: Literally as I was typing this, Jay Glazer reported they will add at least two more starters to this list tomorrow, including one who has tested positive. Baltimore’s strength and conditioning coach is a guy named Steve Saunders. Steve didn’t follow guidelines, got sick WITH symptoms, didn’t tell anyone, and continued to come to work. He’s been suspended.

2: Denver is now faced with playing the Saints on Sunday without a QB on the roster. Jeff Driskel tested positive, then the other three QB’s – Drew Lock, Blake Bortles, and Drew Rypien – were all determined to have broken protocol by being around him “for a significant time” without anyone wearing masks. “Hey, if we don’t tell anyone, maybe no one will find out, LOL.” Well, they did, geniuses, and now Denver is starting undrafted FA WR Kendall Hinton at QB on Sunday. Congratulations, boys.

3: The 49ers were set to host Buffalo on Monday night, but today Santa Clara County imposed a three week ban on “all recreational activities involving close physical contact or close proximity to persons outside one’s household.” Their next two games are both at home, but this news shouldn’t have any impact on the games being played as scheduled. All teams are required to have contingency plans for these situations.

4: The Colts are not free of any Covid-19 concerns. Denico Autry is out for the second straight game, DeForest Buckner has tested positive, and then on Saturday some interesting news came out about Jonathan Taylor. Seems his girlfriend went out of town, came home, and tested positive. Taylor hasn’t tested positive, but he will miss tomorrow’s game because his girlfriend went out of town. His. Girlfriend. Went. Out. Of. Town. During. A. Pandemic. Unless it was an emergency, this is total lunacy.

Look, this doesn’t have a %#$ing thing to do with football anymore.

And this, folks, is the problem. This type of blatant disregard for everyone else is exactly why we’re all still in this situation.

As I’ve stated before, I hate divisional games. No matter the records, they’re usually boring. I’d still feel this way if I rooted for the Cardinals or Chargers instead.

The teams just met two weeks ago, and now the Colts are without five starters (or four, depending upon who you call RB1). I have no idea what’s going to happen.

But it may go a little something like this…

It seems every time the Colts get into a good rhythm on offense, the Titans have another player down on the field. It’s hard to understand since they’re playing indoors, but it’s like Mike Vrabel summoned the spirit of Fat Albert Haynesworth circa 2003 or something. Embarrassing.

After a 36 yard FG by Hot Rod just after the 2 minute warning trims the Titans lead to 1, the Colts get a big break on the ensuing kickoff. George Odum pops Kalif Richmond. Fumble! The Colts recover on the Tennessee 29.

The drive stalls, however, but another Hot Rod FG brings the game to the half with the Colts leading 12-10.

On the first drive of the 2nd half, the Colts reel off a beautiful 10 play drive that lasts over 7 minutes. Jordan Wilkins punches it in from 2 yards out. There’s another gift on the kick return. Odum pops Richmond again, and the Colts recover on the 15. The drive stalls, but Hot Rod is good from 26.

Tennessee responds with an 11 play drive, and a 40 yard kick by Gostkowski brings the score to 22-13.

After a 16 yard pass to Michael Pittman on the first play of the next drive puts the Colts almost at midfield, Rivers sees something in the defensive alignment.

MICHAEL PITTMAN JR WITH THE RIDICULOUS ONE HANDED OVER THE SHOULDER GRAB!!!

Pittman gets up and waves his teammates down the field. Two plays later, Nyheim Hines takes it 5 yards for the TD. Colts lead 29-13.

Tennessee tacks on two TD’s in the 4th quarter and makes everyone sweat, but the game is over.

The AFC South is won.

Elizabeth, who is really not Elizabeth, becomes a record setter by becoming the first fan of the opposing team to contribute twice to this article. She would be the second person – and first living person – to contribute twice were it not for the fact our overlords switched everything around, therefore wiping out my entire archives from 2016 to most of 2019.

Thanks for nothing, guys,

No really. Thanks for absolutely nothing.

Anyway, here’s what she had to say for this rematch… 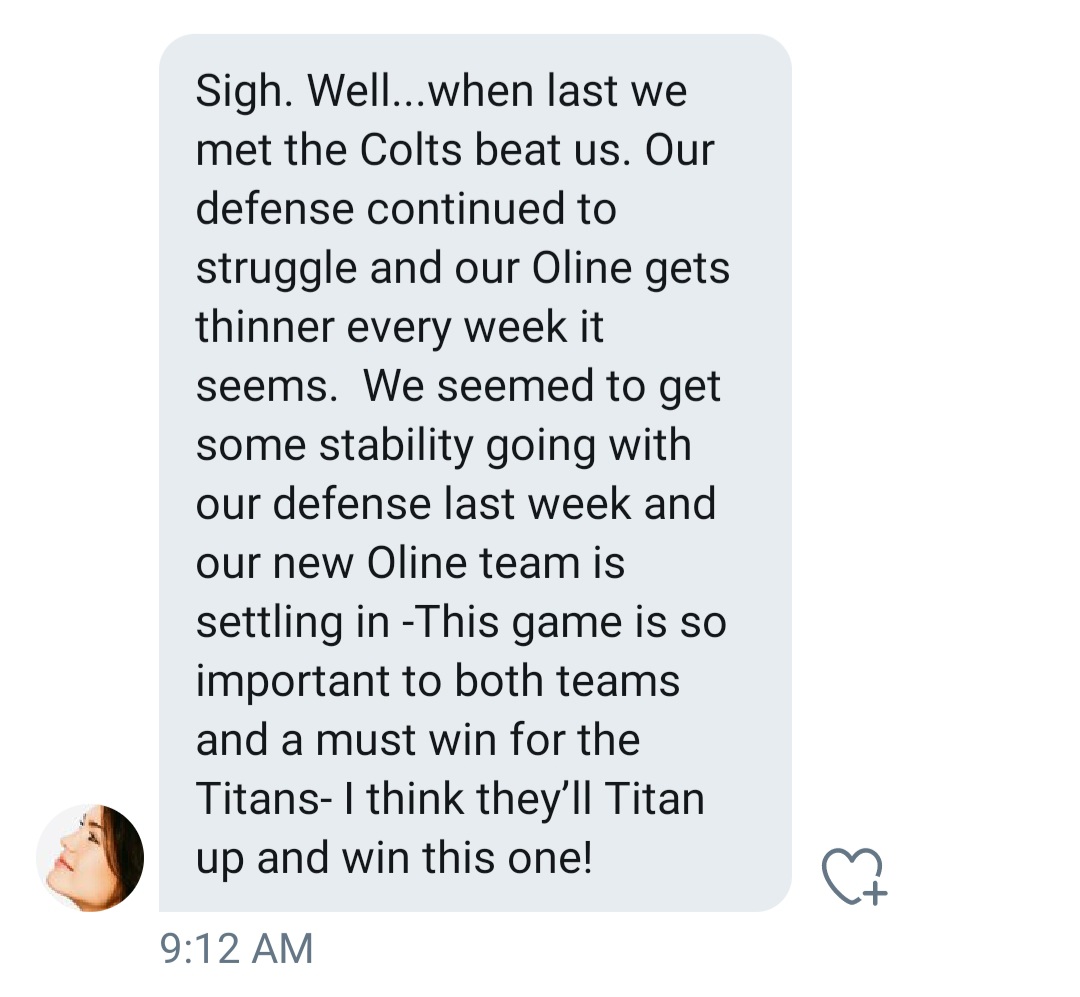 Is she right? I have no idea, and neither do you.