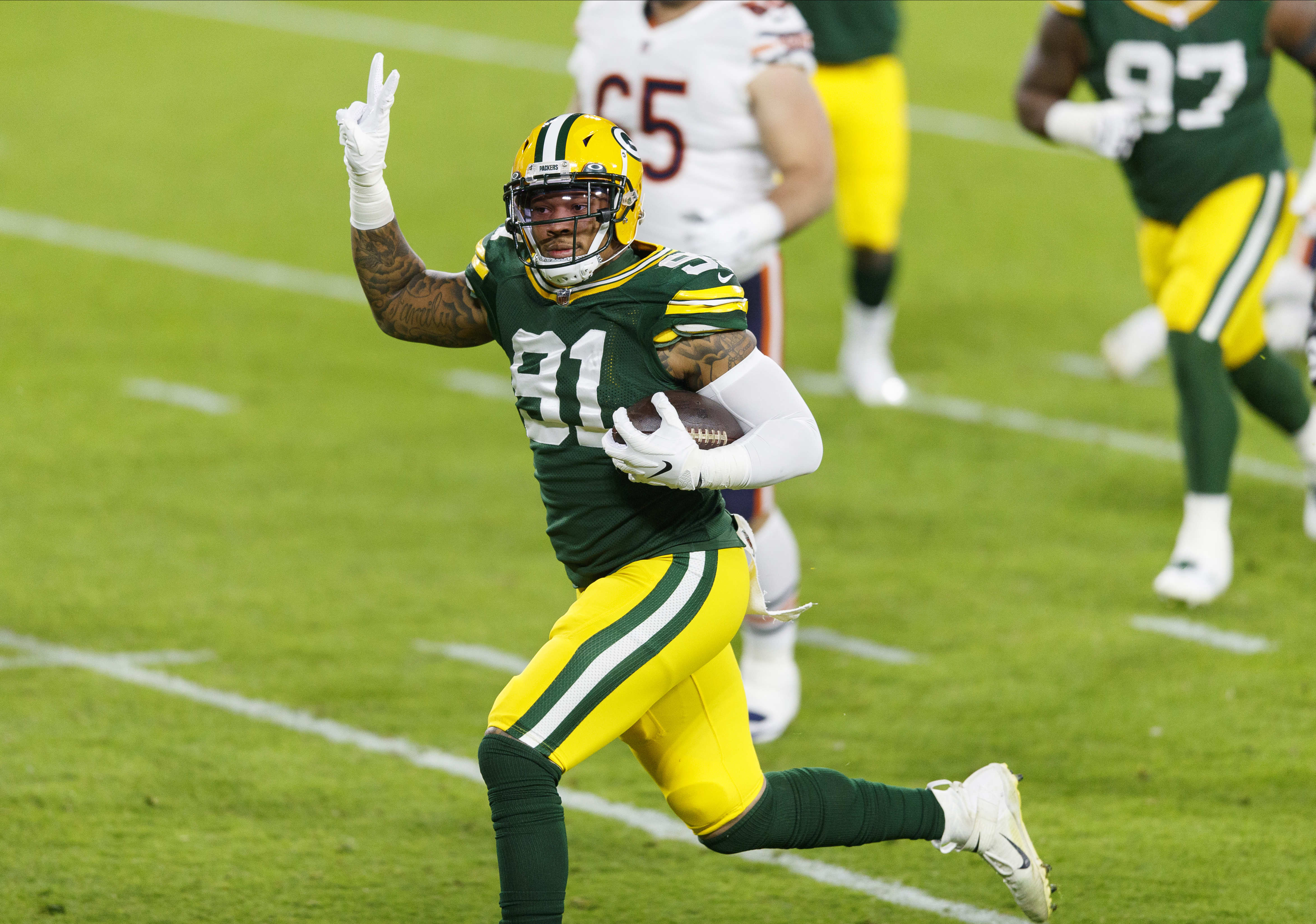 The Green Bay Packers dominated the Chicago Bears and coasted to a 41-25 victory at Lambeau Field on Sunday night. The win improved the Packers record to 8-3-0 and gives them a three-game lead in the NFC North with five games remaining.

Aaron Rodgers threw for four touchdowns while the defense forced three turnovers including a fumble recovery for a touchdown by Preston Smith that gave the Packers a 27-3 lead. The Bears never really threatened after that.

Here are 10 things we learned from the Packers 41-25 win over the Bears:

1. The Packers Offense Made it Look Easy

The Packers offense moved the ball downfield easily almost all game against the once-vaunted Bears defense. The Packers had 41 points by the end of the third quarter before they eased up to protect their large lead.

The Packers punted only twice in this game and only once when there was any doubt about the outcome.

Unlike last week, the offense kept going after halftime, outscoring Chicago 14-0 in the third quarter to put the game away.

The Green Bay offense can score on almost any team. They have faced two of the league’s better ranked defenses in the past two weeks and scored 72 points against them.

2. Preston Smith Had His Best Game of the Season

Preston Smith has struggled this season, but the former Mississippi State star had his best game of the year against the Bears.

Preston finished the game with three tackles, one sack, two quarterback hits and the 14-yard fumble recovery for a touchdown.

It certainly helped that defensive coordinator Mike Pettine didn’t have Preston Smith dropping back into coverage very often and allowed him to concentrate on his strengths.

The Packers will need more strong performances from Preston Smith down the stretch, but his was a big game for him and hopefully it helps him build confidence for a strong finish to the season.

3. The Offensive Line Was Outstanding

The Bears defense is considered one of the better units in the league but the Green Bay offensive line was more than equal to the task on this night despite losing starting center Corey Linsley to an injury early in the game.

Once again, Elgton Jenkins moved over to center and rookie Jon Runyan, Jr. filled in at guard. Once again, the offense didn’t miss a beat. The line more than did its job and it was a big reason the Packers gained 393 total yards in this game.

Aaron Rodgers was not sacked and was not hit all game long. The Packers also averaged 4.7-yards per rush and that includes Tim Boyle’s two kneels from the victory formation at the end of the game.

The offensive line protected the quarterback, gave him plenty of time to throw and opened some big holes for both Aaron Jones and Jamaal Williams in the run game. You can’t ask for much more.

During the week, Packers head coach Matt LaFleur promised to place a greater emphasis on the running game this week. He proved it was more than coach’s speak and was true to his word as the Packers ran the ball 39 times while attempting just 29 passes.

As a team, Green Bay gained 182 yards in this game and that also helped keep the offense balanced and the chains moving.

Rodgers just keeps on rolling and like a fine wine, he seems to be getting better with age this season. With his 211 yards passing, Rodgers passed the 50,000 yard mark for his career and he’s done it in just 185 starts. He still trails Brett Favre by a little more than 11,500 yards for the Packers all-time passing yardage mark.

Rodgers threw four touchdown passes which gives him 33 on the season, the most he’s had since he finished with 40 in 2016.

Packers safety Darnell Savage had a big game and has shown consistent improvement in recent weeks after struggling early in the season.

Savage had two interceptions in this game and broke up two passes.

Unfortunately, the former Maryland star left the game in the second half due to an injury. Hopefully, it is nothing serious and the Packers will have Savage back in the lineup next week against the Eagles.

7. The Packers Dominated Time of Possession

Just how good was the Green Bay offense against the Chicago? They dominated time of possession from the start and held onto the football for 37:44 compared to just 22:16 for the Bears. Keep in mind the Packers played a prevent defense in the fourth quarter and the Bears had the ball for 8:28 in the final 15 minutes.

The Bears were dominated until the game was out of reach and the mix of runs and passes was effective nearly all game long.

Davante Adams continued his strong season, catching six passes for 61 yards and a touchdown. This was far from his best game but he was still good when he needed to be and the Bears didn’t really find a way to stop Adams or the Packers offense.

With the six catches, Adams has surpassed the 500-catch mark for his career. Adams is now fifth on the Packers all-time list in catches and needs 25 more catches in the final five games to pass Hall of Famer James Lofton for fourth place.

Adams has proven he is one of the best receivers in the game and he remains Rodgers’ most reliable and dangerous weapon.

The Packers intercepted Mitch Trubisky twice and had Preston Smith’s fumble recovery for a touchdown to give the defense three takeaways for the game.

The offense did not turn the ball over at all which was huge after the Pack lost the ball four times in their loss to the Colts a week ago.

When you play mistake free football on offense and force three turnovers on defense, you’ll win nearly every time.

10. The Packers Are Close to Locking Up Another NFC North Title

With this win, the Packers improve to 8-3, which puts them three games ahead of the Bears and Vikings who are both 5-6. All three teams have just five games remaining on their schedule. Green Bay and Minnesota are now 3-1 in the division while the Bears are 1-3.

If the Packers win just two of their remaining five games, Minnesota and Chicago would have to run the table just to tie the Packers.

The Packers hold the second seed in the NFC as of now, one game behind the 9-2 Saints. If the Packers and Saints finish in a tie, Green Bay would get the tie-breaker because they beat New Orleans 37-30 earlier this season.

There is still a long way to go in this season, but this division and conference win put the Packers in a good position as they enter December and the stretch drive of the season.