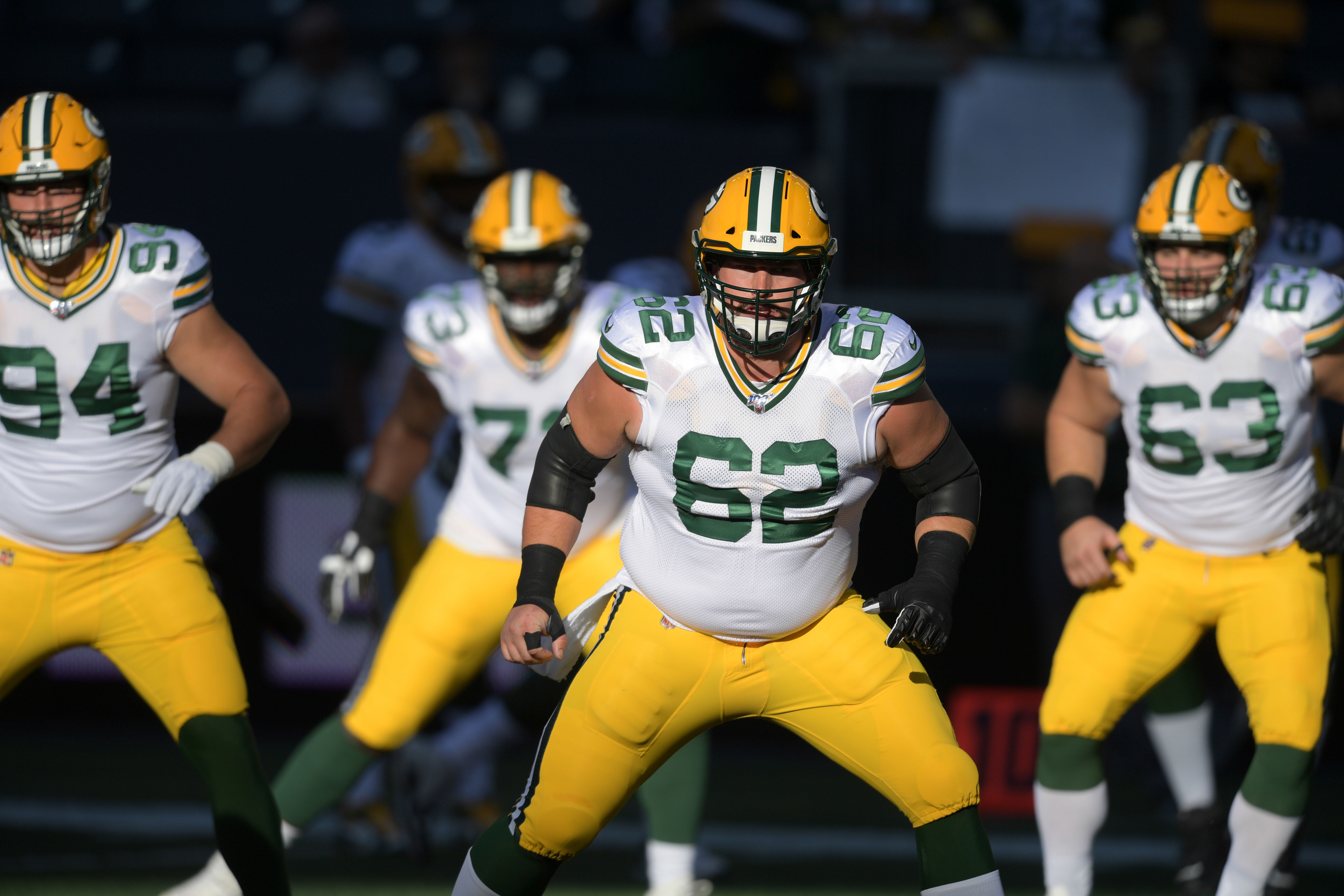 The Green Bay Packers offense continues to play well in 2020. The team has scored 30 or more points in eight of their 11 games thus far. The Pack leads the league in points scored, are fifth in total yards per game and have just put up 72 points in their last two games against highly-regarded defense in the Colts and Bears.

The Packers have been able to accomplish this despite a series of injuries along the offensive line which has forced them to constantly juggle personnel and make changes to their lineup even in the middle of games.

Through 11 contests, the Packers have started four different offensive line combinations and this week against the Eagles, they will start a fifth. In addition, the Packers have made numerous changes mid-game due to injuries.

In 2019, Gutekunst drafted Elgton Jenkins in the second round. The former Mississippi State star played center, tackle and guard during his college career and has played all three positions this season for the Packers. He started the season at right tackle when Billy Turner was hurt for the opener, but quickly shifted back to guard after Lane Taylor left the game with an injury. He has moved to center whenever Corey Linsley has been injured mid-game and has also lined up at his usual guard position.

Offensive coordinator Nathaniel Hackett has been impressed by Jenkins’ ability to play anywhere along the offensive line.  “We’re thinking of moving him to wide receiver now,” Hackett joked with reporters before last week’s game with the Bears. “We’re just going to see how many different positions we can have him line up at. It’s pretty special what he does from left tackle to left guard, I think he’s played right guard, I don’t know if he’s played right tackle yet, and playing center. That’s pretty impressive. Just to be able to handle yourself at this level and play at a high level the way he has at all those positions it’s just unbelievable. It’s unbelievably important for us as a team. What he’s done for us as an offense and as a team and not even blinking an eye and not even worrying about it and just saying, ‘I’ll play center.’ It’s pretty awesome.”

Gutekunst also signed Billy Turner as a free agent prior to the 2019 season. Last year, Turner started all 16 games at right guard for the Packers. This season, Turner has played both left and right tackle in games for the Pack and has done a solid job at both positions.

Turner tried to explain the challenge involved in switching sides mid-game. “It’s really just the mental aspect to tell yourself, ‘OK, instead of pushing with this leg, I have to push with the opposite. Instead of throwing this hand first, I have to use this hand.’ It’s the weight distribution and the mentality when you’re in sync during a game, you kind of get in the zone and you just get in this mood of doing everything in the right way. And it’s just kind of a flow. It’s hard to explain.”

He added, “This is something that I heard Packers legend Josh Sitton say a few years ago in Miami, and that is, ‘It’s like wiping your (butt) with your opposite hand.’ And if you’ve ever tried that, I’m sure you know.”

Lucas Patrick has played both guard positions and center for the Packers this year. It remains to be seen whether Patrick will move to center or Jenkins will get the start against the Eagles this week now that Linsley has been lost for 3-to-6 weeks due to an injury he suffered in the Bears game.

Lane Taylor is another Packers offensive lineman who can play multiple positions. Before he was injured, Taylor has played both guard and tackle for the Packers.

This season, Gutekunst drafted former Michigan star, Jon Runyan, Jr., who has filled in admirably at guard on five different occasions when injuries struck along the offensive line. Runyan is also versatile. He played tackle in college, has played guard in games for the Packers and has spent time in practice learning how to play center in case he’s needed there.

Thus far, his teammates have been impressed with the job Runyan has done. “Jon has proven that he’s a reliable backup and he’s done a good job,” quarterback Aaron Rodgers said earlier this season. “He’s been in three times now because of injury and done a good job all three times.”

Runyan may get a start now that Linsley is expected to miss at least the next three games depending on how the coaching staff decides to proceed.

Regardless of how they decide to line up, the Packers offensive line has demonstrated that it has depth and versatility. Usually, the offensive linemen need to work together more to have cohesiveness but this unit has found ways to be extremely effective despite all the change constantly going on with the lineup.

The Packers will need the offensive line to continue to play well in the final five games of the regular season if they have a chance to clinch a division title and maybe even earn the top seed in the NFC playoff race and the bye that goes along with it. So far, the offensive line has delivered, but more challenges lay ahead.