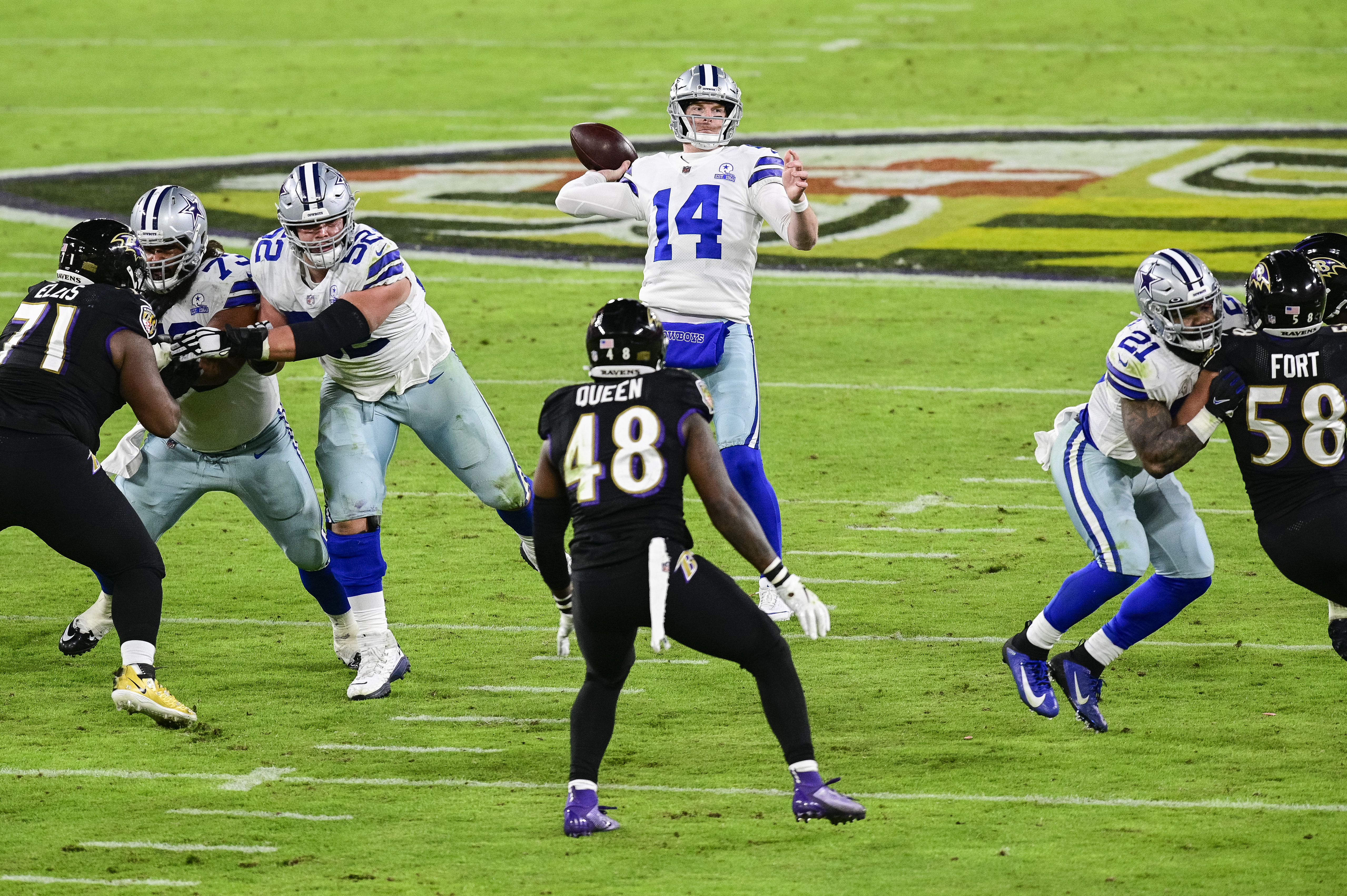 I expected the Dallas offensive line to be the weak spot against the Ravens, seeing as the Cowboys are down to their third string at OL— but it didn’t really pan out that way. For the most part, Andy Dalton got good protection, and at least a decent running game to support his attack.  What happened to turn the game were the regular failures of the Dallas run defense, with occasional gaffes in secondary coverage communications.

Lamar Jackson ran for 94 yards and a touchdown as the focal point of a relentless rushing attack that amassed 294 yards, and the Baltimore Ravens emerged from a COVID-19 outbreak to beat the Dallas Cowboys 34-17 on Tuesday night.

Returning from a one-game absence after testing positive for the potentially deadly virus, Jackson carried 13 times and threw for two scores. He was one of 23 Ravens to spend time on the reserve/COVID-19 list while four different strains of the virus swept through the organization.

The game was played on Tuesday night because Baltimore’s previous game — against Pittsburgh last Wednesday — was pushed back three times while the Ravens had at least one player test positive for 10 consecutive days.

Gus Edwards ran for 101 yards on just seven carries and rookie J.K. Dobbins — who also missed time on the COVID-19 list — added 71 yards rushing with a TD to help Baltimore (7-5) break a three-game skid and stay alive in its quest to reach the postseason for a third straight year.

Dallas came in with the worst rush defense in the league, and it showed. The Ravens averaged 7.9 yards per carry and prevailed despite getting only 107 yards passing from Jackson.

The last-place Cowboys (3-9) have lost six of seven. Andy Dalton went 31 for 48 for 285 yards and two touchdowns, and Ezekiel Elliott rushed for 77 yards.

The game was supposed to feature Ravens receiver Dez Bryant going against his former team, but Bryant left during warmups and was scratched with what Baltimore termed “an illness.”

Bryant wrote on Twitter that he tested positive for COVID-19 and later posted: “Yea I’m going to go ahead and call it a quit for the rest of the season… I can’t deal with this.”

He subsequently posted a series of tweets, including, “Yea I’m coming back… I’m being smart.”

On his first series since Nov. 22, Jackson threw a pass that was tipped and intercepted. That led to a Dallas field goal, but Jackson answered with a 37-yard touchdown run on a fourth-and-2 play.

Tony Pollard took the subsequent kickoff 66 yards to set up a 13-yard touchdown pass from Dalton to Michael Gallup. It would be the last time Dallas led.

An interception by rookie Patrick Queen set up a 38-yard touchdown pass from Jackson to Miles Boykin for a 14-10 lead.

Jackson’s second TD pass of the game, a 20-yarder in the third quarter to Marquise Brown, made it 24-10.

Baltimore’s Justin Tucker missed a 36-yard field goal in the second quarter, ending his NFL-record run of 70 straight successful FGs from inside 40 yards. … The Ravens have rushed for 100 yards in 35 straight games, third-longest streak in NFL history. … Baltimore has won nine straight over NFC foes, the longest active streak for one team against the other conference.

Ravens: Fullback Patrick Ricard left in the third quarter with a possible concussion but returned.

UP NEXT FOR RAVENS:   More prime-time action for Baltimore, against the host Cleveland Browns on Monday night. It’s a rematch of the season opener won by the Ravens, 38-6.