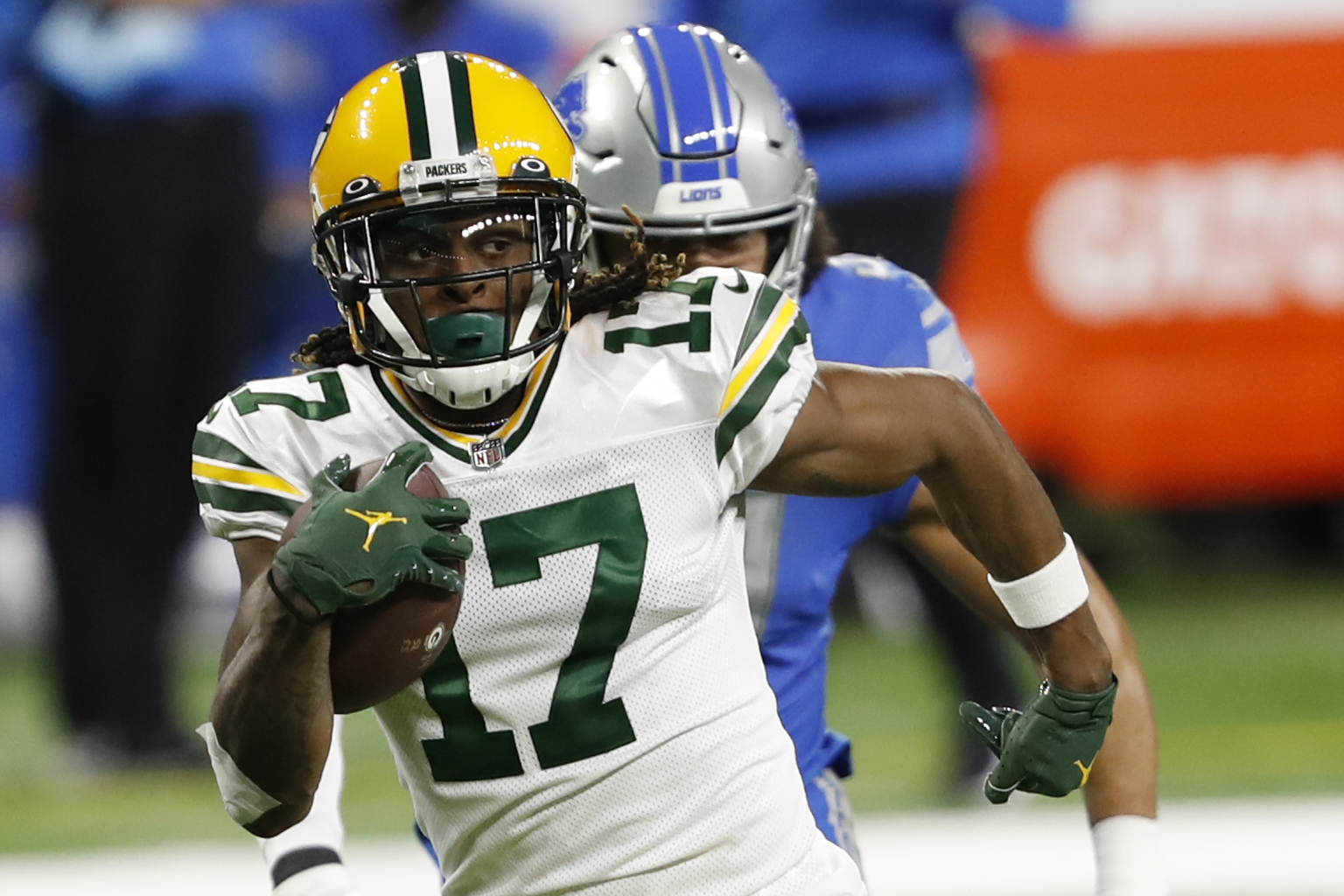 The Green Bay Packers clinched their second straight NFC North Division title with a 31-24 victory over the Detroit Lions in Detroit on Sunday.

Aaron Rodgers threw for 290 yards and three touchdowns while running for a fourth while Mason Crosby kicked a 57-yard field goal to help clinch the victory while Davante Adams caught seven passes for 115 yards and a touchdown.

With the win and the Saints loss to the Eagles, the Packers took over the top seed in the NFC playoff race with three games to go and have the inside track to earning the only first-round bye in the postseason.

Here are 10 things we learned from the Packers 31-24 win in Detroit:

Rodgers continues to be on top of his game. He finished this contest by completing 78.8 percent of his passes for 290 yards and three touchdowns and he ran for another score. His quarterback rating was 133.6, the 12th time in 13 games this season that the Packers signal caller had a rating of more than 100.

Rodgers didn’t throw an incomplete pass until 5:50 was left in the first half. He seems to be operating this offense like a skilled technician who is completely comfortable with what he needs to do.

Rodgers now has 39 touchdown passes on the season against just four interceptions. He is once again the best quarterback in the league and is the frontrunner for his third league MVP award after Patrick Mahomes threw three interceptions today.

Adams had another big game, catching seven passes for 115 yards and a touchdown. That is the eighth straight game Adams has scored a touchdown, breaking Don Hutson’s franchise record set more than 75 years ago.

Adams and Rodgers have outstanding chemistry. Tae is extremely reliable on short routes and can break any pass for a long gain like he did on the 56-yard touchdown dash. He has such excellent body control and gains a quick advantage on defenders off the snap of the ball as a result.

The Packers top receiver now has 90 catches for 1,144 yards and 14 touchdowns on the season. Watching Adams and Rodgers operate is pure joy for Packers fans.

The Packers committed 12 penalties for 68 yards in this game. The penalties set back the offense on a few occasions and on defense, helped prolong several Lions drives.

The Packers can get away with the penalty parade against a mediocre team like the Lions, but in the playoffs against another contender, 12 penalties could easily be the difference between winning and advancing in the playoffs or a premature ending to a promising season.

The game was all even at halftime 14-14, but the Packers came out and dominated the third quarter. First, they went on a 14-play, 75-yard drive that took 8:49 seconds off the clock and gave them a 21-14 advantage.

After the defense forced a three-and-out, the Packers started a 12-play, 79-yard drive that stretched into the fourth quarter and took another 7:49 off the clock.

The Packers gained yards in steady, small chunks. The longest gain on these two drives was 21 yards and yet the Packers scored on both drives as they methodically moved the ball down the field.

The time of possession in the third quarter was 13:39 for the Packers to just 1:21 for the Lions. That is dominant football.

The Packers tight end continues to be productive and pick up key first downs. He caught five passes on five targets for 36 yards and a touchdown. That gives Tonyan nine touchdown receptions on the season. If he can manage one more in the final three games, the former Indiana State star would become the first Green Bay tight end to catch 10 or more touchdown passes since Keith Jackson did it in 1996.

Tonyan has emerged as a quality receiving tight end and now has 46 catches on the season for 533 yards and nine scores. Rodgers knows he can count on Tonyan to move the chains and get open underneath. He is particularly adept at finding holes in zone coverages.

The Packers again struggled on special teams except for Crosby’s 57-yard field goal and his four extra points.

Tavon Austin made his Packers debut returning punts but made only one return for two yards while fair catching his other chance.

Jamaal Williams gained 20 yards on the only kick return he ran back with the rest going for touchbacks.

But once again, the Packers allowed a long return that kept Detroit in the game after the Packers had taken a 31-21 lead late in the fourth quarter. Jamal Agnew ran back a kickoff 71 yards before Crosby tackled him at the Green Bay 33. At least Crosby took the proper angle and made a proper tackle which is more than J.K. Scott did on the two punt returns for touchdowns earlier this season.

Scott almost had one of his two punts blocked but averaged 50.5-yards per punt and got good hangtime after getting the ball off.

The Packers also handled an onside kick poorly and the Lions nearly recovered it although the ball went out of bounds just in time and the Packers took over and ran out the clock.

Poor special teams play almost allowed the Lions to get back into the game. Against a quality opponent, it could cost the Packers a game.

The Lions are not a strong running team, but the Packers run defense held up and limited Detroit to 51 yards on the ground for the game on 15 carries. Their long run was just 11 yards and the average yards per rush was just 3.4.

Again, the biggest factor was that the Packers took a lead in the second half and controlled the ball for so long that the Lions had to throw the football to try to catch up, but the Packers run defense made several stops near the line of scrimmage and as a team, the Packers made five tackles for loss.

Green Bay was able to sack Lions quarterbacks four times and including some key sacks in the second quarter that kept the game tied at the half. The Packers also had six quarterback hits in the game.

Darnell Savage continued to make big plays, coming up with his first career NFL sack, while Dean Lowry got a sack in his second consecutive game. Rashan Gary came up with his fifth sack of the season while Kenny Clark got his second of the year.

Gary is coming on as a pass rusher and his speed coming off the edge on his sack was outstanding. Clark continues to raise his game in December, something the UCLA alum seems to do every year.

Marquez Valdes-Scantling caught six passes on six targets for 85 yards and a touchdown. The best part for MVS was he caught different kinds of passes, not just the deep post pattern he is famous for and he did not drop a pass.

The Packers will need steady production from secondary receivers like MVS, Allen Lazard and Tonyan if they hope to make a long playoff run this season and today, they got what they needed from this group.

For the second straight year, the Packers are NFC North champs. No other coach in franchise history accomplished that feat in his first two seasons, not even Curly Lambeau or Vince Lombardi.

Under Matt LaFleur, the Packers are 23-6 during the regular season and are 10-1 against NFC North opponents.

The Packers have accomplished their first goal, winning the division. If they win their final three games, they will clinch a first round bye in the playoffs and the road to the Super Bowl in the NFC will go through Green Bay.

It would be a big advantage to the Packers to have warm weather and dome teams like the Saints, Bucs and Rams to come to Lambeau Field in January. The Packers could also avoid a long road trip to Seattle and force the Seahawks to win a playoff game in Green Bay if they hold on to the top seed.

Aaron Rodgers has played in four NFC Championship Games in his Hall of Fame career but all have been on the road. He is 1-3-0 in those games. Getting home field advantage in the playoffs and a first-round bye would be a big deal for this team and helps keep the Packers focused and gives them something to play for down the stretch.