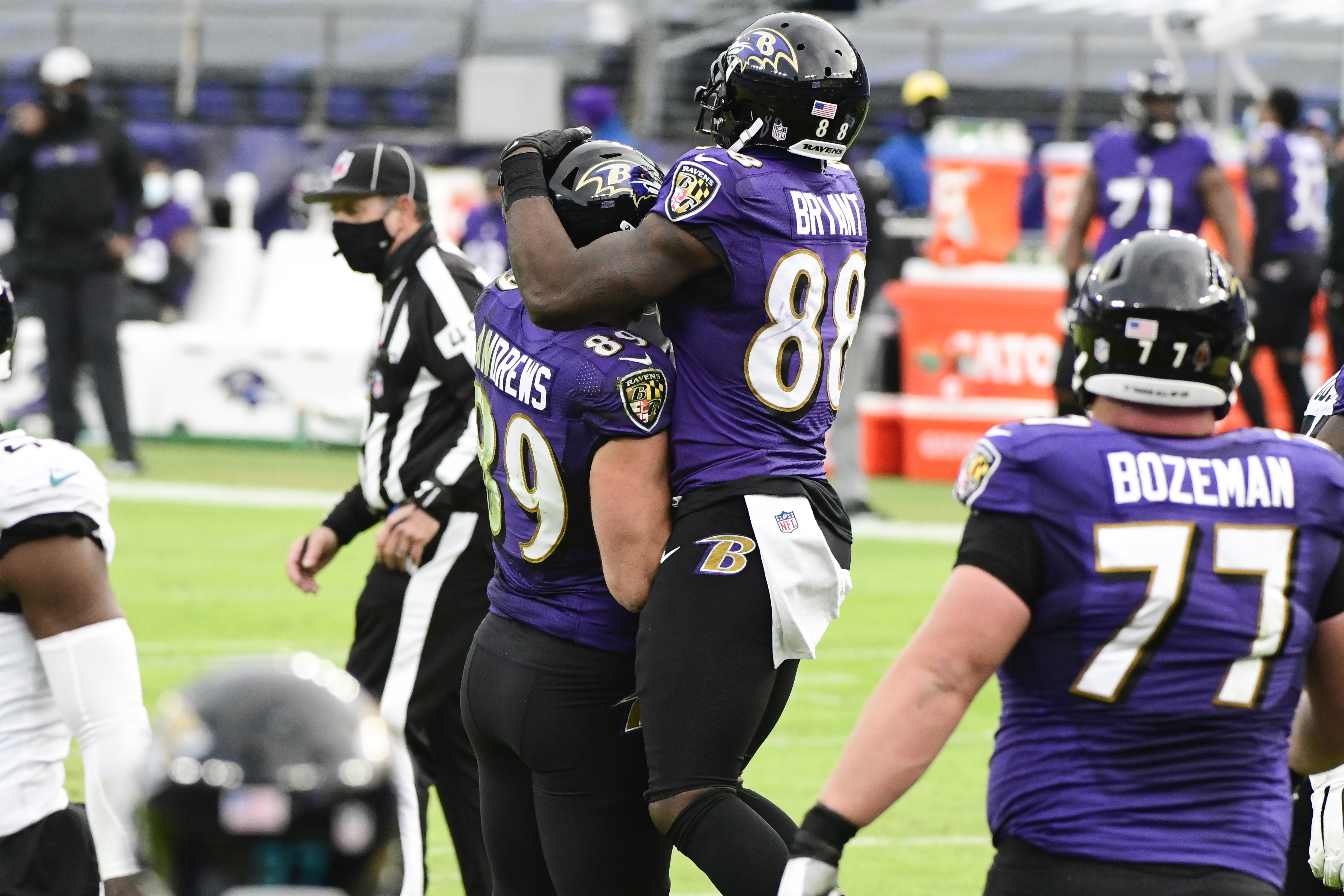 We didn’t expect a “laffer” in this one, but the Ravens beat the Jaguars so relentlessly in every phase in the first half, it turned into a hopelessly one-sided game.

Lamar Jackson and the Baltimore Ravens enjoyed a feel-good, confidence-building blowout that boosted their chances of reaching the playoffs for the third consecutive year.

Jackson threw three touchdown passes and ran for a score, and Baltimore built a 26-point halftime lead against helpless Jacksonville in a 40-14 victory Sunday.

The Ravens (9-5) have won three straight following a three-game skid and remained in the hunt to secure one of three AFC wild-card spots.

“We just got to keep focus on what we have in front of us, and pray next week the (teams) we need to lose, lose,” Jackson said.

After Jackson returned from a bout with cramps to deliver a thrilling 47-42 win in Cleveland on Monday night, the Ravens had no desire for any angst at home against Jacksonville (1-13). Baltimore got the desired result, taking a 26-0 lead in the second quarter before cruising to the finish to hand the Jaguars their 13th consecutive defeat.

“You always just hammer home what’s at stake and looking straight ahead,” coach John Harbaugh said. “It just goes back to guys who are character guys who understand perspective and what’s at stake.”

Rookie J.K. Dobbins ran for 64 yards and a score, and 32-year-old receiver Dez Bryant celebrated his first touchdown in more than three years. It added up to the kind of easy-does-it rout the Ravens were looking for as they head into the final two weeks of a harrowing season in which they’ve fought through an outbreak of COVID-19 that forced two games to be rescheduled.

The Jaguars, meanwhile, struggled on offense behind quarterback Gardner Minshew, making his first start since Oct. 25. Minshew returned from a thumb injury and a subsequent benching to go 22 for 29 for 226 yards and two touchdowns, but he was sacked five times and lost a fumble.

“I told them that (Baltimore) was clearly the better team,” Jaguars coach Doug Marrone said. “There are some things we did well. Obviously, we weren’t good enough.”

Not even close. Jacksonville gained only 62 yards rushing on 22 attempts and was limited to 267 yards in total. The defense wasn’t much better, especially in the pivotal first half.

And now, the Jags head toward Christmas with a single victory.

“This team has been going through a lot and is trying hard,” Marrone said. “The greatest gift we can all give to each other is the gift of winning a football game.”

A safety and a 4-yard touchdown catch by Miles Boykin put the Ravens up 9-0 early, and Dobbins scored on a 2-yard run — his fourth straight game with a TD — to up the margin early in the second quarter. A field goal and Bryant’s 11-yard touchdown reception capped a lopsided first half.

It was Bryant’s first trip to the end zone since he scored for Dallas against the Giants on Dec. 10, 2017. He sat out two straight seasons before joining the Ravens as a free agent in October.

Bryant crossed his arms and made an “X” immediately after the touchdown.

“The special thing about me throwing up the X is to X out negative, to truly never give up, to beat the odds, to destroy adversity,” he said.

Robinson was limited to 35 yards rushing before leaving in the fourth quarter with an ankle injury.

The highlight of the fourth quarter was a 22-yard first-down run by Baltimore offensive lineman Tyre Phillips with a Jackson fumble.

With punter Logan Cooke out with an illness, placekicker Aldrick Rosas was forced to handle all the kicking duties for the Jaguars. He got off a 53-yard boot on the free kick following a safety, but his first punt traveled only 30 yards and he mishandled a snap in the fourth quarter.

Two of the Ravens’ chief offensive weapons have dealt extensively with COVID-19 protocols in recent weeks.

Wide receiver Marquise Brown was activated off the COVID-19 list after a close-contact situation forced him to miss practice leading up to Sunday’s game. Jackson sat out a loss in Pittsburgh after testing positive for the virus but finally appears healthy. “I’m feeling a lot better,” Jackson said. “I woke up feeling good, feel like it’s out of my system completely. … Like it was new toys going out for a ride.”

The Ravens ended their game Monday night with a safety on the final play, and their first points in this matchup came on an early safety. Jacksonville started its first possession on its 1-yard line following an interception. On second down, Minshew was sacked in the end zone for a 2-0 lead.

Jaguars: WR Collin Johnson left in the first quarter with a hamstring injury and returned before halftime.