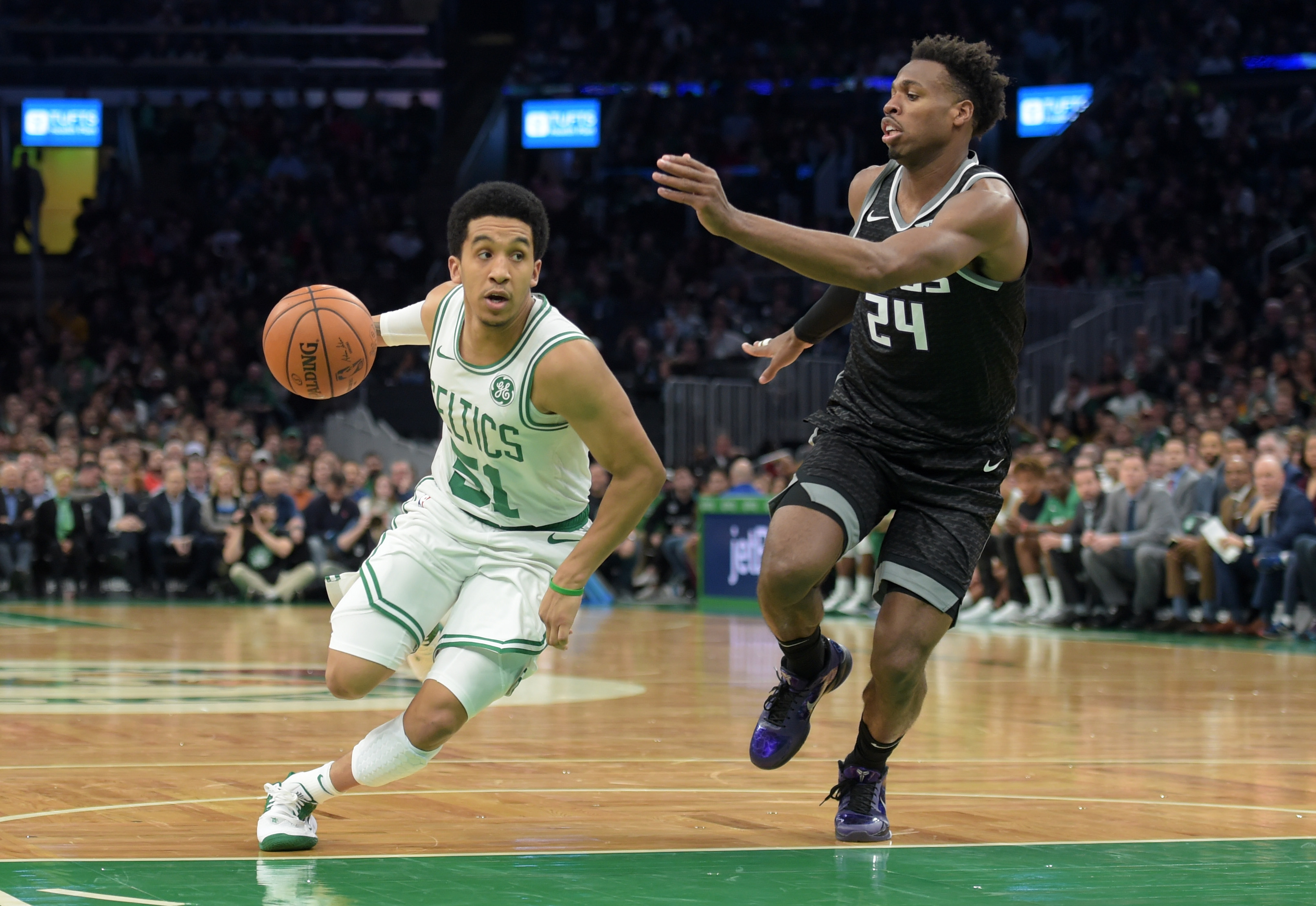 The Boston Celtics practiced on Monday afternoon at the Auerbach Center in Brighton. In addition to Marcus Smart’s focus on his shot selection and Evan Turner discussing his move to coaching, here are a few other notes from today’s practice:

“He practiced today and looked good,” Brad Stevens said after practice. “He hasn’t played in nine months prior to these last two practices so obviously we’ll follow the lead of our medical team and get Tristan’s feedback and see how it goes.”

Thompson strained his hamstring before signing with the Celtics. He seems closer to being ready for action, but it might not be on opening night. Stevens says whenever Thompson returns, he’ll be on a minutes restriction.

Green started both preseason games and has been OK.

“I thought he did some good things,” Stevens said. “I thought we had some moments where we weren’t as good as a group but I don’t think that was on him.”

Green is going to be necessary energy guy for the Celtics to start the season, whether it’s starting, coming off the bench, or pushing guys in practice.

“Javonte’s a guy who’s worked his tail off to be here and stay here, and each and every day he comes out and he brings a different type of energy to this team that rises this team to be its best,” Marcus Smart said. “We’ve just been really excited about what he’s been bringing. Everybody’s a little rusty, we understand that, but the energy that he brings is something that we need.”

Green is on a non-guaranteed deal, which puts him first in line to be cut should the Celtics use the Gordon Hayward Traded Player Exception. Stevens, though, doesn’t care about the contract situation.

Stevens wouldn’t commit to Green’s role moving forward, saying the preseason was “too small of a sample size” to make that determination.

One big focus this season is Tatum’s passing ability and getting better at setting up his teammates. Stevens was asked about that today. Here’s his answer.

“He’s been that for us, right? He played with the ball a ton all three years but certainly last year more than any of them. He drew a lot of double teams and I think what he’s referring to is just making sure he’s making the quickest and right reads. I think you saw in the bubble that his passing was big-time. He was putting the ball on the money, he was making the right read quickly, he draws a lot of attention so guys around him have to be ready but he’s got the vision to do that. He’s going to draw the attention where he’s going to have to do that and I think part of his continued growth is all the great players can kill you in a variety of ways. Making the right read on a pass is a big part of that.”

The COVID-19 situation is actually benefitting some players trying to hang on to their NBA dreams. Two-way players like Tremont Waters can now play 50 games for their teams rather than be limited to 45 days, which would have included practice days.

“I think it’s good,” Waters said. “I’m able to take it one day at a time and just to be able to be here, being around the guys, learning the system even more than I did last year is definitely a great opportunity. So when I do get a chance,  I’ll be ready and I can pick everyone’s brains as far as I need to do.”

Kemba Walker’s injury means a higher potential for Waters to play meaningful minutes for the Celtics. It also means more time to spend talking to Walker about his game.

“I try to pick his brain throughout practice,” Waters said. “Whenever I do get a chance to step next to him, Jeff (Teague), JB, JT, Smart, I just try to ask them, what could I do better to be able to help the team as far as being a point guard and being able to run the team and just running the sets more.”

The downside to this season is that the G League isn’t operating like it did last season. Plans for the G League haven’t even been finalized yet, but it’s most likely going to be some kind of bubble format, and it appears the Celtics will opt out of that. That will mean fewer reps against full-speed opposition for Water and fellow two-way player Tacko Fall.

“We gotta control what we can control,” Waters said. “There’s obviously no season, but for us to be able to compete against these high-level guys, be up here and play with the Celtics and actually be around them every day is just going to help us sharpen our tool, keep every tool in our tool bag tight, and just to be able to get better every day. But it’s definitely a great opportunity to be able to be up here full time and not have to go there to Maine. But overall, we’re just trying to get better every day.”

Soaring with your strengths

Brad Stevens likes use the phrase “soar with your strengths” a lot. He used it today talking about Marcus Smart:

“He can get everybody where they need to be. He’s a much improved shooter but he’s also an outstanding playmaker. I’ve told him we’ve talked a lot about increasing the efficiency of our team and his ability to make plays for others is a big part of that, putting guys in the right spots to soar with their strengths.”

That makes a lot of sense, except, players and coaches might have differing opinions of what their strengths are. I asked Stevens what happens in that situation. Here’s his full answer:

“I think self-awareness is a big part of being a great player, and certainly that’s something that as you get older, you have an even greater feel for what you can do well in this league and what adds value to winning, and what you might want to avoid. And sometimes it’s—as I always said in recruiting, you can get exposure or you can get exposed, right? So you’ve got to figure out what you do best and you’ve got to stick with that, unless you’re like the elite of the elite that can just do everything well and still be great. And I think it takes times for guys to figure that out. People always talk about when Kevin Garnett was here, obviously I wasn’t, but people always talk about when he came to the gym he practiced hard, he worked hard, but then his individual shooting routine he went super hard but it was super short. And he had just figure it out, what he did to impact winning on the offensive end and what he needed to work on every day and it was designed to not only work on it but also to make sure he was ready every single day to give the most energy that he could. So that’s a process with guys. You know, just like with you kids, when you’re young, you want to balance the idea of, ‘Hey, this is what you can do to add value to winning, but I don’t want to stop you from working toward your dreams of being as good as you can be.’ So it’d a fine line. It takes a lot of work. It takes a lot of reflection. It takes the experience of playing at this level, competing with other teammates, learning the strengths of your teammates before—guys will get it at different ages and stages. But certainly it takes time for everyone.”

NBA players have big egos. They almost have to. It’s hard to imagine pushing yourself to these extreme limits without an overwhelming belief in your abilities.

So to fully achieve what Stevens is saying, players have to show a bit of humility and admit what they don’t do well, what their role is, and how to fit into an ecosystem.

Sometimes players can do that. Sometimes players want more. Players like Jerami Grant, left a good team in Denver to join a bad team in Detroit because he really wanted to soar and not be part of a supporting cast. That’s his choice, and we’ll see if it works.

This team probably needs a little more humility in the short term, which was probably the impetus for Stevens’ “do you job” message on Saturday. Roles have be defined and embraced if this team is going to soar.

You can hear an in-depth discussion of where the Celtics stand heading into the season on the latest Locked On Celtics podcast. You can subscribe to the podcast on Google, Apple, Stitcher, or Spotify, or wherever else podcasts exist.