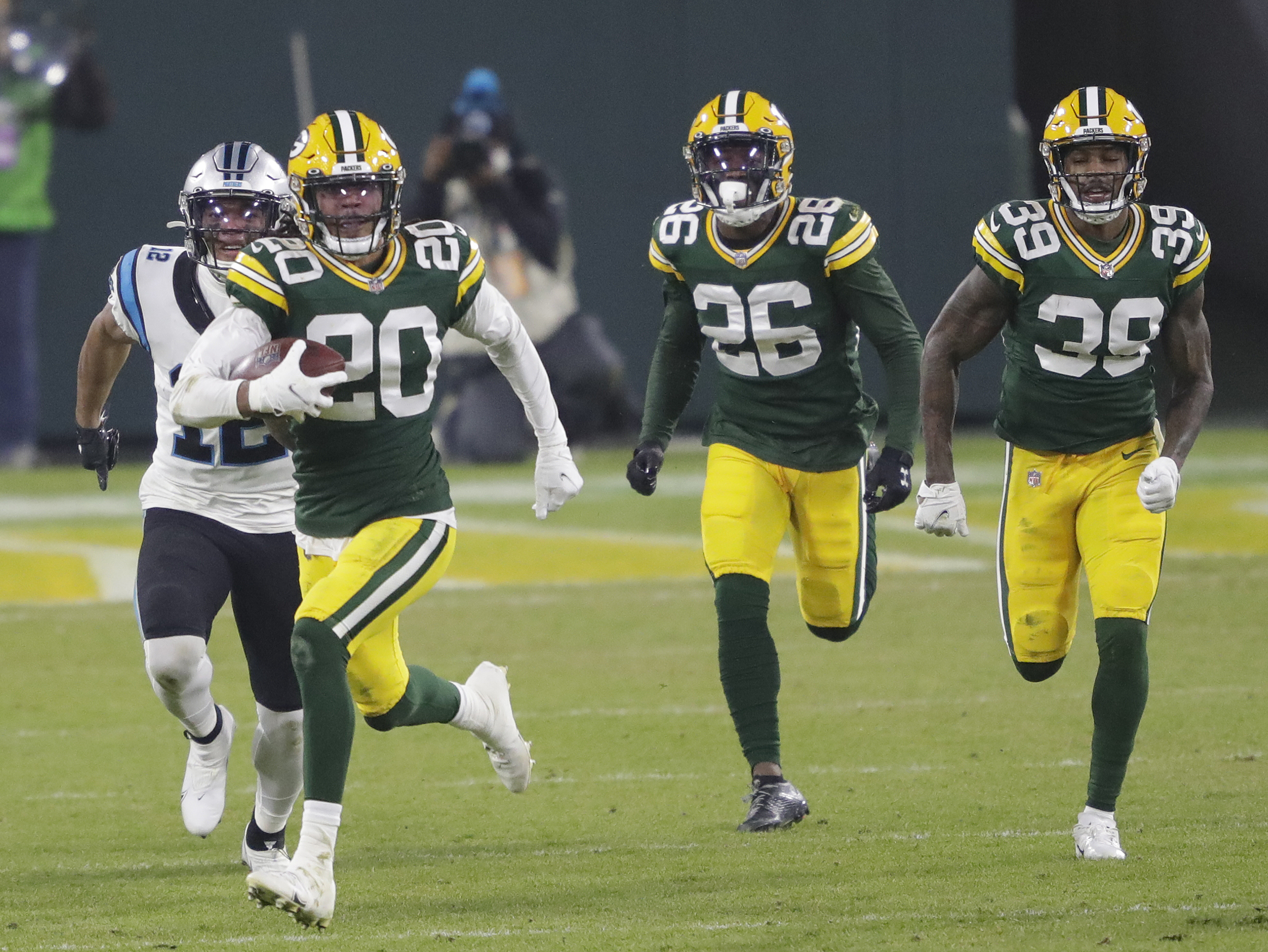 The Green Bay Packers are 11-3-0 are presently leading the race for the top seed in the NFC and the first-round bye that goes with it. Still, the Packers performance against the Carolina Panthers on Saturday night was hardly comforting as the Pack did just enough to hold on and defeat a mediocre Carolina team that is now 4-10.

After the game, quarterback Aaron Rodgers was blunt during his on-field interview with NFL Network. “This is one of those disappointing wins the way that we played in the second half. So, I have a sour taste in my mouth how we played in the second half,” Rodgers explained. “We’ve got to get back to the drawing board. That kind of football is not going to beat a lot of teams. We won the game, we’re 11-3. It’s been a successful season so far, but we’ve got plans about making a run and the way we played on offense we’re not going to beat anybody in the playoffs.”

With that in mind, here are five things the Packers must do better to have success in the postseason:

The Packers tend to be outstanding for two or three quarters and then their play tends to fall off. We saw this often this season. The game against Carolina is a prime example. The Packers led 21-3 after getting off to a strong start but played poorly in the second half.

Against Indianapolis, the Packers played an outstanding first half only to blow a 28-14 lead and lose in overtime.

Head coach Matt LaFleur likes to use the expression, “All gas, no brake,” but when they get a lead, the Packers tend to let up and allow opponents to get back into the game. Against a quality opponent, such lapses could cost them a victory. The Packers need to play four quarters of consistent football to beat good football teams.

Special teams has been a problem for the Packers for several years. Only kicker Mason Crosby, who is perfect on all 16 of his field goals this season, has been a bright spot for the Pack. Crosby has missed three extra points, however.

Punter J.K. Scott has been very inconsistent this season. Scott has a healthy 45.6-yard average per punt and has placed 14 kicks inside the opposing team’s 20-yard line, but he has had one punt blocked and two returned for touchdowns. His net punting average is only 36.8.

Coverage teams are a huge issue for the Packers. In addition to the two punt returns for touchdowns, the Pack have allowed several lengthy kick returns including one that nearly allowed the Lions to get back into the football game in Detroit. Opposing teams are averaging more than 24 yards per kick return against the Pack.

The Packers return game has struggled as well. Tyler Ervin, their main return specialist, is presently on IR and Ervin was not producing as well as he did after signing with the Packers late last season. As a team, the Pack are averaging only 18.9-yards per kick return but most of the returns have been done by Ervin and the since released Darrius Shepherd.

Punt returns haven’t been much better. The recently signed Tavon Austin was brought in after Ervin got hurt, but thus far, Austin has made two returns for just a 3.5-yard average.

Special teams can be the deciding factor in a close game where field position can be critical. The Packers need to be better in this area to make a long playoff run.

Tackling has also been something the Packers have struggled with in recent seasons. Against the Panthers, for example, the Packers allowed a 40-yard pass from Teddy Bridgewater to D.J. Moore that led directly to a Panthers field goal on the next play. Two Packers defenders tried to tackle Moore for a short gain but they both attempted arm tackles and instead of a moderate gain, the play covered nearly half the length of the field.

The defense must wrap up ball carriers promptly and not allow opposing players to gain extra yards after contact. Again, this is something you can get away with against teams that aren’t that good but against playoff contenders, this can come back and cost you a game.

It happens far too often and it drives Packers fans crazy. Green Bay takes an early lead and then the defense changes its strategy. They suddenly give opposing receivers a large cushion when playing in man coverage and feature a lot of soft zone. The opposing team completes lots of short passes, mixes in a few runs and an occasional deep ball and suddenly, a three score lead becomes a one score game.

The Packers usually win these games but they are often against struggling teams. Against a playoff team like the Colts, however, the Packers lost in overtime

The Packers need to make these adjustments to soft zones and loose coverages later in games when the outcome is already secure. Good teams are much more likely to come all the way back and change the outcome of the game.

The Packers are still struggling to stop the run. The best run defense the Packers have tends to be taking a big early lead and getting into a situation where the opponent must pass almost exclusively to try to catch up and get back in the game.

Defensive coordinator Mike Pettine strategically sacrifices run defense to emphasize stopping the pass. But if the Packers do secure the home-field advantage and are playing on the Frozen Tundra in a playoff game in January, they will have to be able to stop opposing running games.

On Saturday against the Panthers, the Packers allowed Carolina to gain 115 yards rushing on 27 carries. That’s an average of 4.3-yards per attempt.

For the season, the Packers have allowed opponents to gain 110.1-yards per game, which is not such a bad number, but opponents are averaging a healthy 4.6-yards per carry against the Packer defense.

The Packers will face Tennessee’s Derrick Henry next week at Lambeau Field. Henry is the NFL’s leading rusher and his combination of size and speed will be a real test for the Green Bay defense.

In the playoffs, the Pack could face talented running backs like Dalvin Cook, Ronald Jones, Kenyan Drake or Alvin Kamara. The run defense does not have to be outstanding, but they cannot let a running back dominate and take over a game when they are playing a quality opponent.