Packers Ground Game Will Be a Big Key in the Playoffs 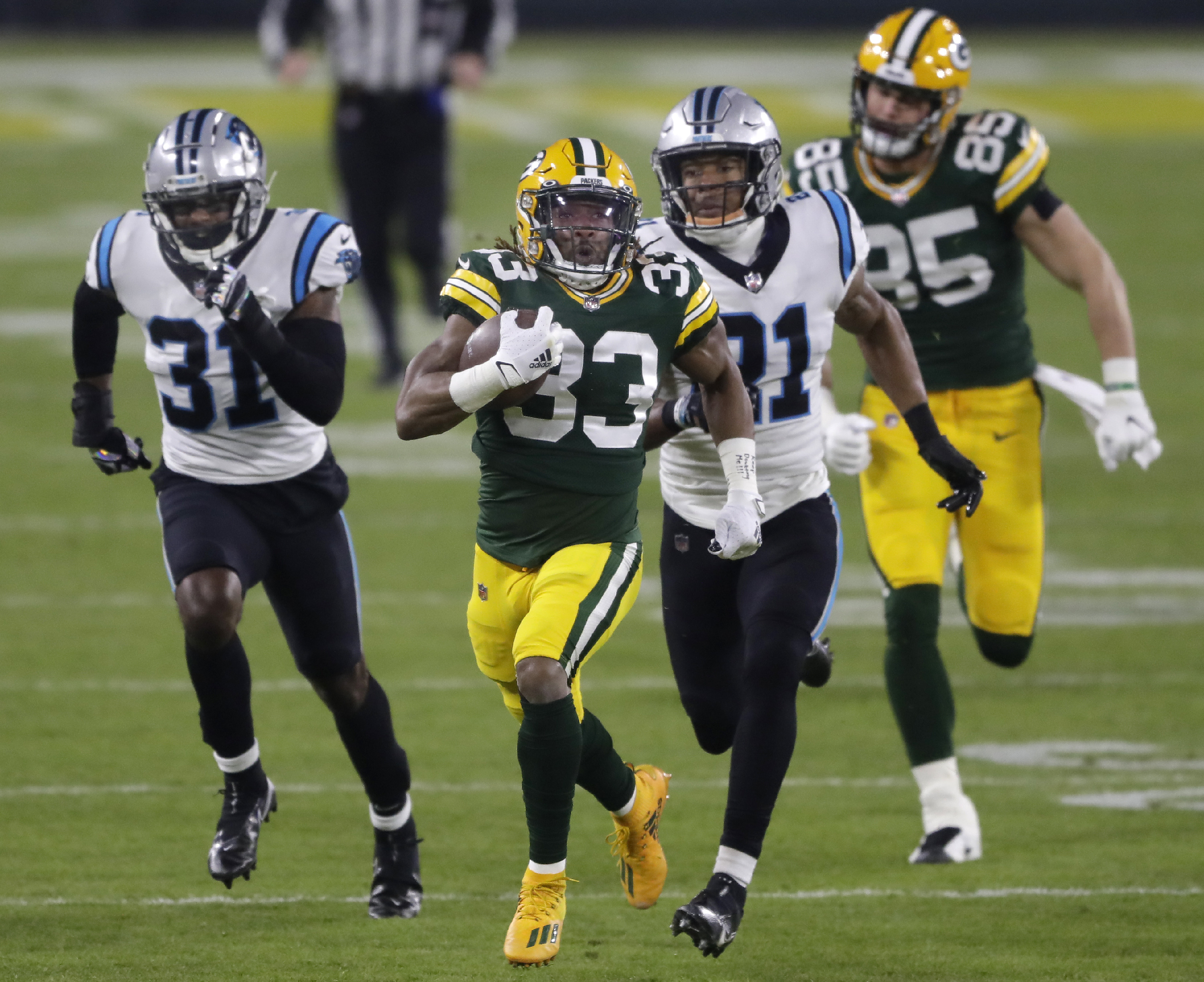 Packers Ground Game Will Be a Big Key in the Playoffs

The Green Bay Packers are heading to the playoffs for the second consecutive year. The Pack is guaranteed at least one home playoff game with the chance to make all their postseason contests go through the Frozen Tundra of Lambeau Field if they can earn the top seed in the conference.

One thing the Packers will need in the postseason is a strong running game. When the weather is cold and the winds are a factor at Lambeau Field, the passing game may be limited. Furthermore, keeping defenses off-balance becomes more important when playing top quality opponents like the Pack will likely face in the playoffs.

The good news is that the Packers running game has been very productive in recent weeks. Over the last four games, the Packers have averaged 161.5-yards per game on the ground and have never gained fewer than 120 yards. The strong ground game has been a big help as the Packers are 4-0 in those contests.

The Packers have a deep and diverse set of running backs and all of them can be a big factor in the offense’s success. Put them all together and the Packers have a variety of ways they can attack opposing defenses.

Aaron Jones is the top back. The 5’9”, 210-pound former UTEP star is the team’s most dangerous threat out of the backfield. Although he has missed two full games due to injuries, Jones is just 32 yards away from his second consecutive 1,000 yard rushing season.

Jones is averaging an impressive 5.4-yards per rush and while he is behind his record-setting touchdown pace of a year ago, he has 10 touchdowns total this year in 12 games and is a dangerous weapon in the red zone as both a runner and receiver.

His biggest weapons are his speed and his vision which make him a threat to break a long run on any play. His 46-yard dash on the opening drive against Carolina last Saturday night on the game’s third play helped set the tone for the Green Bay offense and helped set up the Packers first points of the game.

Because of Jones’ lack of size, the Packers have been careful to not overuse him over the course of the regular season. This way, he should be fresh and ready for the playoffs.

Jamaal Williams is the primary backup. Williams is more of an inside runner who excels playing on wet and sloppy fields.

Williams is the kind of player who is reliable, works hard and does all the little things right. He is the Packers best pass blocker at running back and their most reliable receiver out of the backfield. His teammates enjoy the enthusiasm and positivity he brings to the locker room.

Williams suffered a thigh injury against Carolina last Saturday night. The injury is not believed to be serious, but the coaching staff may choose to give Williams the day off against the Titans on Sunday night to make sure he is as healthy as possible for the playoffs.

A.J. Dillon is the Packers third back. The rookie missed five games after being placed on the Covid-19 reserve list and is just getting back into game shape. He had one carry against Carolina, but it was a dramatic 18-yard gain.

Dillon has outstanding size at 6’0” and 247-pounds and he has the largest thighs of any running back in the league. The biggest obstacle keeping Dillon off the field is his ability to pass protect and run pass patterns. Jones had similar issues early in his career but worked hard to improve in those areas and is now an effective blocker and dangerous weapon as a receiver.

The cold weather conditions are ideal for Dillon to show what he can do. The Packers could turn to Dillon late in games to run through tired defenses and keep the clock and the chains moving.

You can’t discuss the success of the Packers rushing attack without giving credit to the team’s offensive line. They have done a great job this season opening holes for the running backs all season. Green Bay is averaging 4.7-yards per attempt and all three of the team’s top RBs are averaging more than 4.2-yards per rush. The offensive line makes that productivity possible.

Elgton Jenkins has started games at tackle, guard and center this year and has been a solid run blocker at all three positions. Corey Linsley and David Bakhtiari are both presently ranked first at their respective positions by Pro Football Focus. Lucas Patrick and Billy Turner have been steady and reliable and both are tenacious run blockers while Rick Wagner has done a good job at tackle when he was inserted into the starting lineup. These players all deserve kudos for the excellent job they’ve done to help make the Packers running game a consistent force.

The ability to run the football is important in the postseason. The last two times the Packers won the Super Bowl, they ran the ball well in the postseason. The Packers played three road playoff games to get to the Super Bowl in 2010 and they averaged 118.0-yards per game in those three contests. In 1996, the Packers ran for 139 yards in the mud in their first playoff game against the 49ers and then gained 201 rushing yards in the cold at Lambeau against the Panthers in the NFC Championship Game.  Both the 1996 and 2010 teams emphasized the pass, but knew they needed to run the ball to win a title.

The Packers running game will be vital in January. The team’s recent success on the ground is a positive sign as they get closer and closer to the start of the postseason.