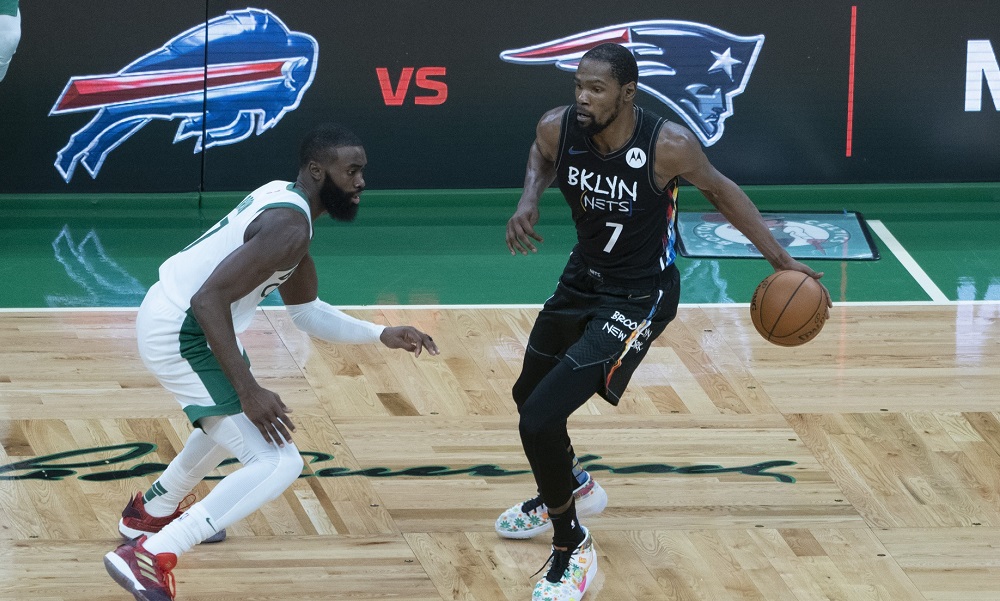 The Nets have shot-makers at every turn, and Brown and Marcus Smart separately brought up the impact it can have when a team like that is pouring in one basket after another.

“They put pressure on you by making shots on the other end,” Smart said, “so if you don’t come down and execute and get a great shot, they put your defense in the bind with the way they run.”

Added Brown: “They’ve got a lot of shot makers on that team and once they hit shots we can’t get discouraged. We can’t let that speed us up. We’ve got to keep moving the ball, keep playing our game. I thought once they started making shots we felt the pressure a little bit and that comes with poise, it comes with experience, and we’re going to continue to build on that.”

In their current state, the Celtics cannot yet consistently compete with a team with two great players. That’s not revelatory and it likely won’t even keep them from sitting in the top half of the playoff bracket, but it confirms what we knew coming into the season that this team needs more growth and more pieces if it’s going to build off the momentum of last season’s deep run.

This was the highest-usage regular-season game of Brown’s career, scoring 27 points on 11-for-25 shooting, 5-for-9 from the free throw line, plus three assists to go with it. To put up that kind of output in just 31 minutes shows just how hard he is working to put his stamp on the game, perhaps even more so than Jayson Tatum, who somehow has not attempted a single free throw in the first two games of the season. It’s the first time Tatum went consecutive games without a free throw attempt since March 26, 2019, nearly two years ago. […]

The Celtics executed well in the opener against Milwaukee. They did what they needed to that night. This was one of those games where they needed their stars to carry them and that’s just too big an ask at this point against the very best in the league. Brooklyn was hardly missing, pressing hard in transition and always had a massive shot blocker lurking at the basket. The Celtics offense just isn’t where it needs to be to make things easy and that’s how Tatum ended up taking too many bad fadeaways, while Brown missed more floaters than he’d hoped for.

The Athletic: Christmas blowout vs. Nets shows Celtics are long way from where they need to be

Hope Santa came through with the PlayStation 5 you wanted, because the Celtics failed to gift-wrap a Christmas win yesterday. And that wasn’t even the worst news of the day (we get to that in Page 2 below).

First, the Celtics lost to the Nets for the second time in a week. The setback a week ago was a beginning-to-end blowout, but at least it was preseason. Yesterday’s was a better Boston effort, and the score remained close through most of the third quarter, until…

Taking place within the NBA’s Christmas Day showcase, the loss was disappointing, but there was an obvious takeaway: In their current shorthanded state, Boston simply can’t match Brooklyn’s talent.

Don’t let the final score fool you: The Celtics were much better Friday than they were a week prior in their preseason loss. Boston took a lead into halftime bolstered by Jaylen Brown’s continued excellence, and the team’s attention to detail was significantly better. […]

The Nets have star scorers who lift their ceiling and a strong supporting cast. Plenty can happen over the course of a season, but Brooklyn looks ready to make some noise.

“They’re very capable of pouring it on,” Brad Stevens said. “I think it’s the deepest team in the NBA and … certainly in the conversation for the best. We know that we have a lot of work to do, that’s very clear. And we know what we have to shoot for. Good to know.”

Looking at it in context, a 1-1 start against two of the league’s best squads is an acceptable outcome. Wednesday’s hard-fought victory over Milwaukee demonstrated that the Celtics are capable of competing against anyone. On the other hand, yesterday’s loss showed how thin Boston’s margin for error is. The Celtics are without Kemba Walker (and Romeo Langford) and without a replacement (yet) for Gordon Hayward. Tristan Thompson is still adjusting after missing training camp, and it’s uncertain what the bench will provide (Jeff Teague, 19 points vs. Bucks, 0 vs. Nets).

When The Jays combine for 60-plus as they did against the Bucks, that’s probably a win. If they tally 40 to 50 (they had 47 yesterday), maybe not. But they can only do so much. Team results are going to vary significantly from night to night.

The challenge for us fans is to accept that the Celtics will probably be inconsistent for the foreseeable future. It goes against our nature as a fan base, but we must avoid getting too high after wins and too low after losses.

Here’s the recommended plan: Ride out the early part of the season by keeping expectations low; wait for Kemba; and hope that Danny Ainge actually uses the traded player exception and uses it well. All we should truly care about is that the Celtics be ready for the playoffs.

Related – Herald: Kyrie Irving’s 37 points leads Nets past Celtics on Christmas  |  MassLive: Jaylen Brown after Boston Celtics’ 123-95 loss to Brooklyn Nets: ‘It’s about the marathon not the sprint’  |  Boston Sports Journal: Robb: Reinforcements will be needed for Celtics to hang with Nets

On Page 2: Losing another legend

As you’ve no doubt heard, Celtics legend K.C. Jones passed away early Christmas Day. He was a Hall of Famer and eight-time champion as a player and a two-time champ as head coach of the Celtics. His no. 25 is retired in the rafters of TD Garden.

K.C.’s passing comes less than seven weeks after the loss of Tommy Heinsohn. We’re losing our legends, and it hurts.

“K.C. was the nicest man I ever met, he always went out of his way to make people feel good; it was such an honor to play for him,” Bird said in a text message. “K.C. and I had so many wins together, including two championships, which remain highlights of my life. His accomplishments are too many to list, but, to me, his greatest accomplishment was being such an outstanding person to all who had the privilege of knowing him. I will miss him dearly.”

Jones will receive the appreciation and love today from the league he helped build and it’s well deserved. Unfortunately, Jones was unable to attend the series of reunions and dinners because of his health. In an era where the NBA has ensured its past greats are lauded for their efforts and contributions to the game, Jones at times was overlooked.

But he was never forgotten or disregarded. At a time when Boston struggled with its racial reputation in the 1980s, the leader of its most prominent sports team was an African American man. And Jones was indeed a leader of men, someone who did not need the personal accolades or attention and basked in the glory of anonymity.

Globe: K.C. Jones avoided the spotlight, which may have cost him greater acclaim

Some of yesterday’s notable tweets about K.C.:

My Dad passed away today at 4:55 am. Thank you all for your love for @celtics and especially for Dad. #KCJones pic.twitter.com/gtfIcGXZ57

The Celtics family mourns the loss of twelve-time NBA champion, two-time NCAA champion, Gold medal-winning Olympian and Hall of Famer, K.C. Jones, as we celebrate his remarkable career and life.

I just received a call letting me know my x-roommate/teammate & most of all friend the great KC Jones passed this morning. Prayers to his family. We have been friends for almost 60yrs, this our last photo together. Friends for life #2020Usuck! #RIP ⁦@NBA⁩ ⁦@celtics⁩ pic.twitter.com/Ia6yZB5l2x

Red’s Army featured K.C. a couple of years ago in our Retired Numbers Project. John reposted his profile of K.C. yesterday, and shared some memories from K.C.’s players.

While most of you reading this probably remember or know of K.C. as the head coach in the ’80s, he was the Celtics’ point guard when I began following the team in the mid-’60s. I immediately loved his tenacious defense, and whenever I hooped I was inspired to shut down my man just like K.C.

Another part of K.C.’s legacy: he was the original Celtics backcourt stopper, a tradition that has included Don Chaney, Dennis Johnson, Tony Allen, Rajon Rondo, Avery Bradley and Marcus Smart.

No. 25 was also a wonderful human being. More from the Globe:

“K.C. was clearly the leader of our team,” Ainge said. “People are always looking for people who are seeking that attention and in front of the camera and K.C. was fine with everybody else getting the attention and not much focused on him.

“There was a genuineness to him, a sincerity. There was no phoniness. We all knew that he cared deeply about us as people. He cared about the Celtics and the traditions but he really didn’t seek that attention and the players appreciated that in him. But he also stood up to some pretty strong personalities. He stood toe to toe with some of the stars on our team.”

And, finally… The pandemic schedule

If you didn’t notice, the Celtics’ schedule is about to venture into new and weird territory, thanks to COVID-19 protocols.

The league is attempting to limit travel by scheduling teams to occasionally play two consecutive home or road games against the same opponent. The Celtics will experience that for the first time on Sunday, December 27, and Tuesday, December 29, when they visit Indiana to face the Pacers.

It happens again next weekend when the Cs are at Detroit on Friday, January 1, and Sunday, January 3.

Boston will host a two-game set for the first time on January 13 and 15 when the Orlando Magic visit the Garden.

Globe: NBA broadcast partners face new challenges in a season without a bubble