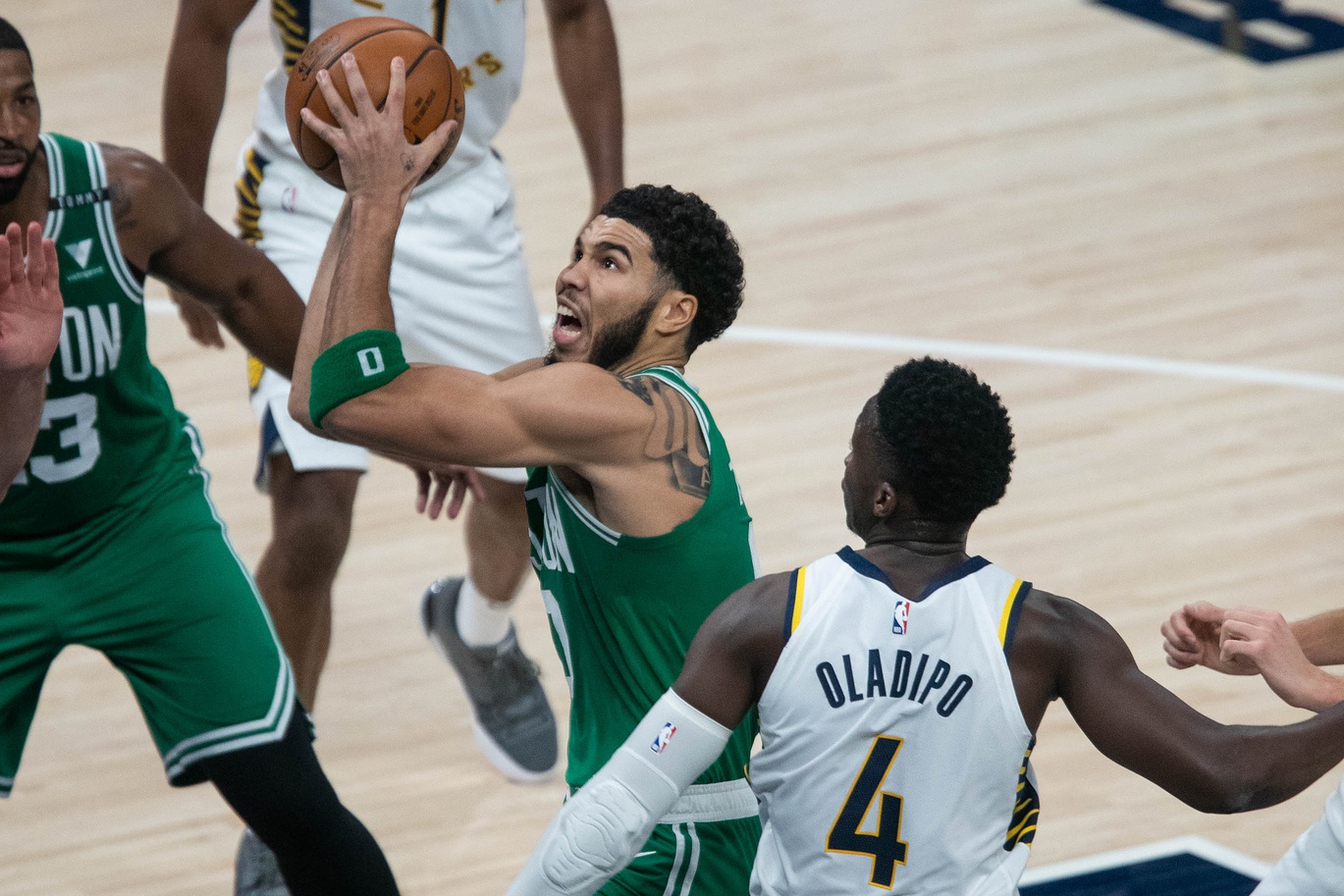 At times it looked as if the Celtics’ second consecutive game against the Pacers might end in an excruciating loss like the first one did. Especially during a disastrous third quarter. But this time Boston was like, “Hey, what if we, like, didn’t let that ruin us?” What if we won 116-111?”

Of the 10 Boston players who took the floor in the contest, five hit double figures: Jayson Tatum (27-11-4 plus 3 steals), Jaylen Brown (20-2-2 plus 4 steals), Marcus Smart (17-1-5-1-1), Tristan Thompson (14-10-1) and Payton Pritchard (10-5-5-1). This was a full-team effort (and the screwups, when they happened, were also team-wide, but they recovered from them more effectively in-game). The Cs were ferocious on the boards when it counted in a way they simply weren’t in Sunday’s matchup, earning plenty of second-chance points as a result.

Let’s take a look at how it unfolded:

I can't say I expected to see a Thompson/Theis give and go tonight, but here we are. That was nice

Jaylen is inventing the concept known as Chad 3

Smart decided he wanted in:

But even more importantly (in light of how the last game went), Boston put up intense pressure on the Indiana offense, which made the lead they built seem more solid:

And the Pacers getting nothing near the rim. 11 of their first 15 shots have come from 3. https://t.co/kkG4hPOhMh

Second quarter wasn’t quite as even, with the Pacers making up a lot of lost ground. We did see some cool shit from the bench, though:

Javonte's gonna keep earning himself minutes if he keeps attacking like this: pic.twitter.com/sqJh53s3Ob

Yall had me thinking Fastpp was a straight bum or something. Hes real solid.

Perhaps TODAY is White Boy Day. On a less enjoyable note, fans were displeased with Jayson’s slow-ish first half:

It was kinda logy, but still…

Pacers don't have an offensive rebound yet but it's partly because they're shooting a million percent from 3.

Also Victor Oladipo was back for Indiana, looking very much like his old self.

The remainder of Q2 played out like a brutal war of attrition, with the Pacers matching every Celtics punch. Lotta dudes for both teams clustered under the basket on every would-be rebound.

Third quarter comes around…historically a trouble spot for the Celtics…and this one did not buck that trend.

The twin-towers Theis/Thompson lineup was definitely questionable, but it kept giving us highlights.

Grant Williams didn’t see a lot of time but made the most of it:

But overall: Bad third quarter. Really, really bad. Pacers just kept canning shots and the Celtics seemed flabbergasted by it, unable to respond in any consistent fashion that could get a run started.

Catch the 4Q on @NBCSBoston or stream it right here https://t.co/uSr28gFzzp

Then the switch flipped—big time.

11-0 Celtics run by Tatum plus bench.

Mind you, it wasn’t always pretty, but it worked:

That was quite a sequence pic.twitter.com/4MQJsNlZOZ

Boston took the lead at the 6:28 mark of the fourth quarter on a Tatum free throw and never looked back. Indiana definitely kept things close—as Mike Gorman noted on the broadcast, contests between these teams are always close and tense—but Boston wanted and earned payback for the last game.