The Emergence of A.J. Dillon Gives Packers' Opponents Even More to Worry About 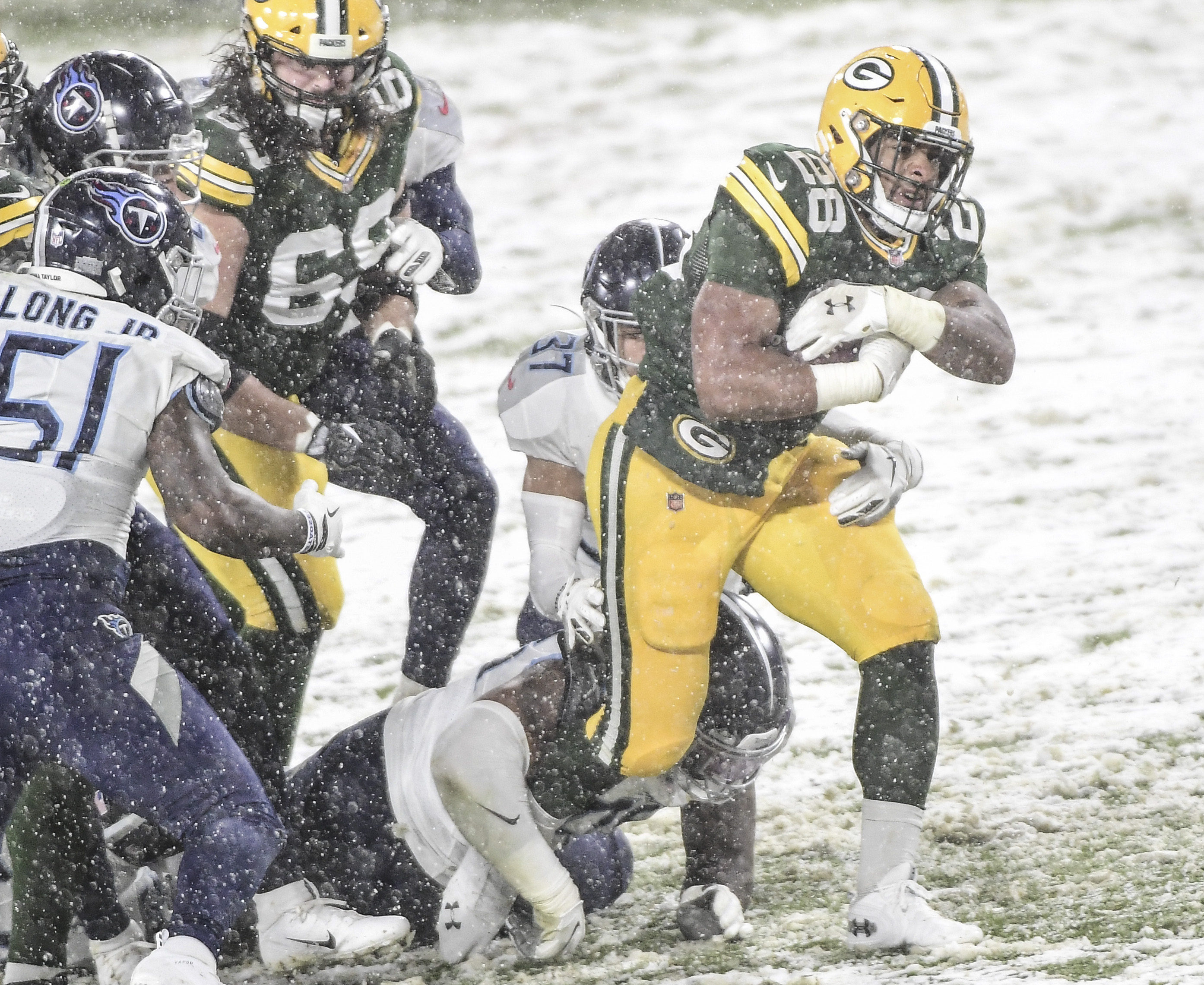 The Emergence of A.J. Dillon Gives Packers' Opponents Even More to Worry About

The Green Bay Packers selected A.J. Dillon in the second round of the 2020 NFL Draft with the hope that he could be the big back who can carry the load in the cold and snow of Green Bay in November, December and January.

On Sunday night against Tennessee, Dillon got his first extended action of the season and showed exactly why the Packers drafted him. The Boston College alum gained 124 yards on 21 carries and scored two touchdowns to help the Packers earn a one-sided victory.

Head coach Matt LaFleur was pleased with Dillon’s performance. “He was tremendous tonight,” LaFleur told reporters after the game Sunday. “A.J. can do a lot of great things.”

Dillon has overcome a lot since joining the Packers. He was third on the depth chart to start the season behind talented veterans like Aaron Jones and Jamaal Williams. Earlier this season, Dillon landed on the Covid-19 reserve list and missed five games as he tried to recover from the deadly virus.

But the rookie never stopped working and managed to improve his game and gain the confidence of his coaches and teammates.

“For him to stay with it through everything he’s been through, I think that says a lot about him,” LaFleur said. “I’m really proud of his effort and just not getting discouraged because that can be tough on guys, especially when they’re the star in college at that position when you’re getting the bulk of the carries and the bulk of the plays and then coming in here and you’re not getting a whole lot of action. You just never know when your number is going to be called. I went up to him prior to the game and said, ‘Hey, you better be ready tonight, we’re coming to you.’ I was just happy that we finally delivered on that because I feel we said that a few times now. For him to step up and be ready to go and just run really well and violent and physical and did a nice job in the pass game, I think that gives everybody a lot of confidence.”

Dillon never stopped working and LaFleur noted that he improved in the key areas of the game that are critical for Packer running backs. “He’s capable out of the backfield as a receiver [and] he has gotten so much better in pass protection,” LaFleur added. “That gives you a lot of confidence and then you could feel his physicality as he was running the ball, just really trying to punish defenders and it was great to get him back. I’ve got a lot of confidence in him.”

Dillon never lost confidence in himself, even when he wasn’t seeing the field much. He learned from the veterans ahead of him on the depth chart and made sure he would be ready when and if he got his chance.

“I feel like this entire time has been a blessing in disguise,” Dillon said. “Obviously, I’ve had some time to be behind guys like Jamaal [Williams] and Aaron [Jones]. I’ve taken so much from them and the coaches and being able to watch them. I feel like that’s really helped me with my development. I find it a blessing in disguise for sure, today was unbelievable and I’m excited. We have a next man up mentality, that’s the way we do things here. I was happy to help out the team.”

Quarterback Aaron Rodgers was also impressed with Dillon’s performance. “A.J. was great,” Rodgers said. “I thought he ran well. I thought he had some momentum runs. As a young player there are plays throughout the game that almost surprise you. Where you almost surprise yourself and you get that confidence bump right away. I think he had a few of those plays where you think you’re getting tackled quickly and you break out of it and turn a three-yard gain into an eight-yard gain.”

While Dillon had never had more than five carries in a game before this Sunday, some teammates were not surprised by his breakout performance.

“A.J. did exactly what I was waiting for this whole time,” wide receiver Davante Adams said. “Obviously, I could see what he can do in practice but to have a solid game like that, to outrush Derrick Henry when he didn’t even start, just a great performance and it was great for him.”

One thing Dillon does need to work on is his Lambeau Leap. On his first touchdown, he failed to reach the stands. On his second, wide receiver Allen Lazard gave her a boost so he could reach the level he needed to be at for a proper Lambeau Leap.

“I’m looking forward to when fans are back next year and they can help me up there a little bit,” Dillon said with a smile. “I’ll have it perfected by then.”

The Packers have one more regular season game remaining. If they defeat the Bears in Chicago on Sunday, they can wrap up a first-round bye and home field advantage throughout the NFC playoffs. Jones was banged up a bit in the Titans game which was one reason Dillon got so many carries. It is still unclear when Jamaal Williams will be able to return. The Packers may need to count on A.J. again on Sunday.

If all three backs are healthy, LaFleur will have three runners with distinct styles each of whom is good enough to start in this league. Jones has the most speed and is a danger to score any time he gets the ball. Williams is savvy and tough between the tackles. He is also the best pass blocker and route runner. Meanwhile, Dillon is a big, physical back who is difficult to tackle.

Having all three backs healthy and available to play in the playoffs would be a big plus for the Packers and would make things difficult for opposing defenses gearing up to try to stop the Packers offense.

Dillon could also enjoy a much bigger role next season since both Jones and Williams are scheduled to be unrestricted free agents. It is very unlikely both will be back in Green Bay in 2021.

“AJ is a monster so I think you’re going to see a lot more of that going forward,” Adams added.

Packers fans are looking forward to seeing a lot more of A.J. Dillon.