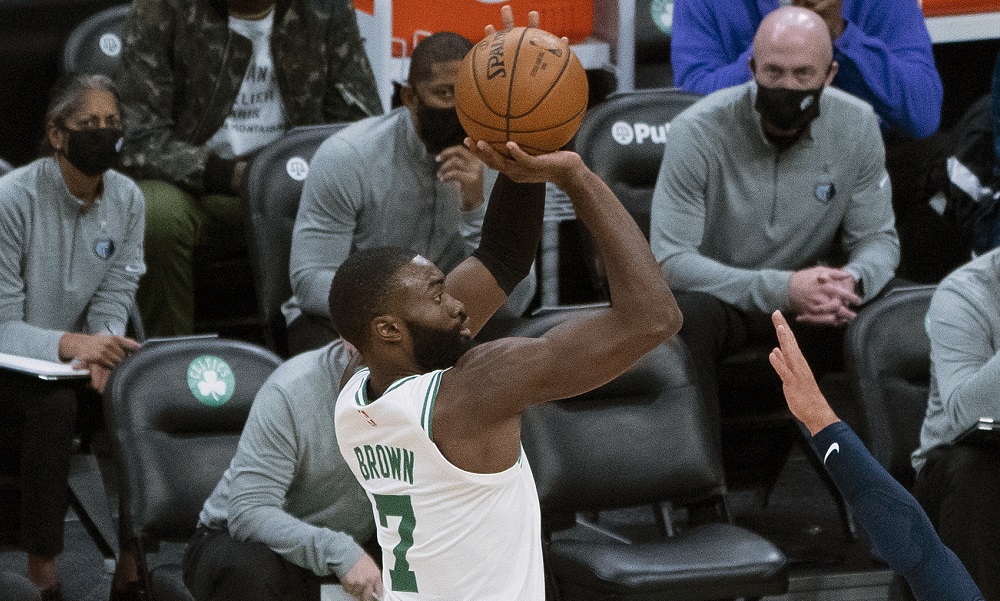 Jaylen Brown has been looking like a sure-fire All-Star in this young season, and yet he took it to a new level Wednesday night against Memphis. JB dropped a career-high 42 points, including seven made three-pointers, tying his career best.

Jaylen’s performance led the way to a 126-107 rout of the Grizz, and the game wasn’t even that close. It was the Cs’ first back-to-back of the season, but they brought the energy for all 48 minutes and avoided playing down to the competition as they often seem prone to do. The Green are now 3-2 and have won two straight.

The Celtics might have been shorthanded, but the Memphis Grizzlies were really shorthanded, and Boston took full advantage. The Celts were still missing Kemba Walker as well as Tristan Thompson, who rested as part of his recovery from a strained right hamstring, and Javonte Green, reportedly for COVID protocols. Jeff Teague replaced Thompson in the starting lineup.

Memphis was in an even worse position.

In  the first minute, the War on Theis resumed, painfully.

Theis is now walking around next to Boston's bench. He's now got a wrap on his right thumb. Appears to be testing it to see if he's going to be able to check back into the game. https://t.co/ETvfhOieXm

Three minutes in and I’m already annoyed at these officials. How can you miss that obvious hack on Theis?

Theis did return, and Boston bounced back behind Brown.

Marcus Smart hit two straight threes (then was way off on his mandatory heat check).

Celts basically toyed with the Grizz in the first 12 minutes.

Seven steals for the Celtics in the first quarter. Defense looks far better (as expected) against undermanned Grizz

The second quarter was more of the same. Payton Pritchard was heard from early.

Are y'all seeing this? pic.twitter.com/Gby2loG426

Memphis crept to within 40-30, but Jayson Tatum drained three straight triples, Jaylen hit a pair of treys, and suddenly the lead was 57-30.

Grayson Allen turned his ankle and went to the locker room. Celtics Twitter offered no sympathy.

What an absolute damn shame that Grayson Allen injured himself on someone else’s foot. Damn shame. Just a shame

By halftime, the score was so lopsided that even Aaron Nesmith had seen three minutes of action, but the story was all Jaylen, supported by Jayson.

Tight one here at the half as Jaylen Brown and Jayson Tatum are tied with Memphis Grizzlies at 40 apiece.

Jaylen Brown enters halftime with 26 points on 10-for-15 shooting. Six made 3-pointers. Some outrageous shot making from him.

In the third, Timelord pulled off some pretty assists.

That passing sequence from Jaylen and Rob was orgasmic

Jaylen’s previous career high was 34 points. Was. The only person who could stop JB was the official scorer.

Brown has currently 39 points, the layup by Tatum at 1:46 was accidentally credited to Brown. #Celtics

Jaylen simply did it all. If he had not sat out the entire fourth, 50 would’ve been a possibility.

Jaylen Brown with the dish📡 pic.twitter.com/3onjuqSk9L