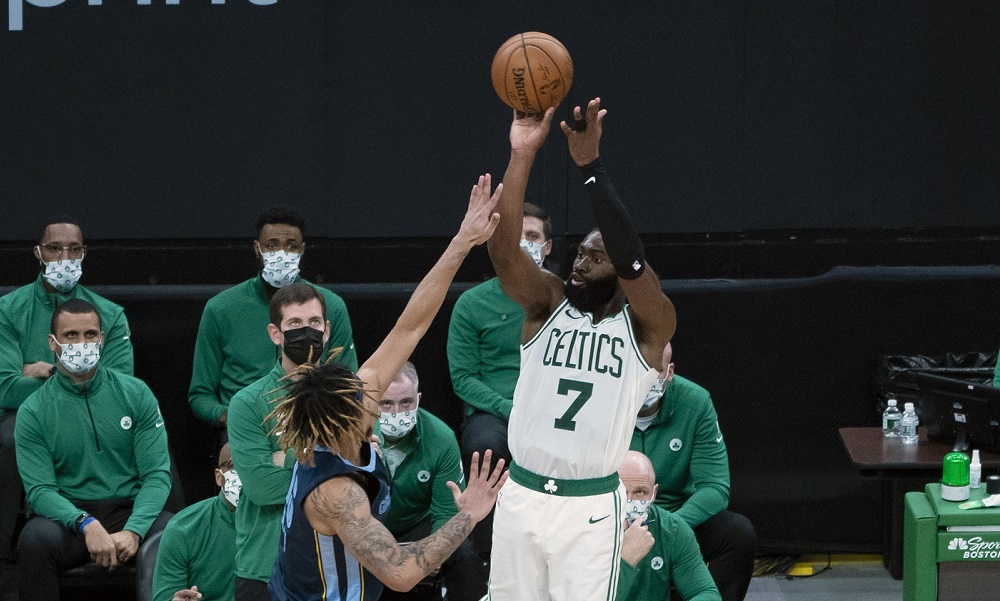 It doesn’t happen often, but last night the Celtics cruised to victory so easily that I never once worried about the Grizzlies making it close. And my motto when watching the Celtics is “No lead is big enough.” So my chill mood reflected just how thoroughly the Cs dominated the contest at TD Garden.

Here are five thoughts about the blowout win.

The Grizzlies came to Boston with just 10 healthy players. Their leader, Ja Morant, was out with a sprained ankle. In the two games before his injury, he had scored a combined 72 points on 28 of 48 shooting, with 16 assists. Yes, you could say Memphis missed him.

The visitors were also without stud big man Jaren Jackson, Jr., recovering from knee surgery, and during the first half Grayson Allen turned an ankle and sat out the rest of the night.

I don’t have a statistical study to prove this, but it seems like historically the Celtics often don’t take advantage of this type of situation. Instead of winning convincingly, they play down to the competition and maybe eke out a win. Every season, there’s a handful of games that end up as Ls and we say, “How the hell did they lose that?”

That never happened last night. The Cs jumped out to a 31-19 lead after one quarter, extended that to 66-40 at halftime, and didn’t let the Grizz even sniff a comeback. There was no third-quarter letdown. Boston’s starters all sat out the fourth quarter, which is a luxury on the second night of a back-to-back.

With a little help from his coach, Jaylen Brown set a career high in points with 42 and tied his best three-point shooting performance with seven made triples. Memphis was helpless to stop him.

People who don’t see every Celtics game may not have understood how much Jaylen has improved in the past two seasons. They may think that Boston is Jayson Tatum’s team alone, but really The Jays are the co-leaders. The leap that Tatum made last season is what we might be witnessing now from Brown. We certainly have higher expectations for Jaylen than ever before. Look at this stat, compiled before Brown’s 42-point effort.

Trade JB for James Harden? No, thank you.

He only had two assists, but everyone noticed that Rob Williams is a very skilled passer. He sees the court well and is clever when necessary in delivering the dish-off. At the risk of some Tommy-like hyperbole, this gorgeous dime is something you might expect from a Bird or a Rondo.

This tip pass from Robert Williams was tremendous: pic.twitter.com/QA23qEHSGJ

With Tristan Thompson resting his tender hamstring, Rob played 23 minutes off the bench and posted 6 points, 10 rebounds and 4 blocked shots. He’s looking better every game, and we love to see it.

Making Brad Stevens even more happy was that Boston’s defense held the Grizzlies to 43% shooting (40 of 93). It was the first time in the five games to date that the opponent shot under 51%.

Playing their first game in the Garden since the passing of KC Jones, the Celtics showed a tribute video on the scoreboard. (We’d link to it, but for some reason, the Cs didn’t post it to their Twitter.)

The black band on the jersey was also updated to honor both Tommy and KC, a detail that KC’s daughter Bryna appreciated.

Goodbye and good riddance, 2020. Happy New Year, Celtics fans, and may 2021 bring nothing but good news for you.

Hall of Very Good 59m ago