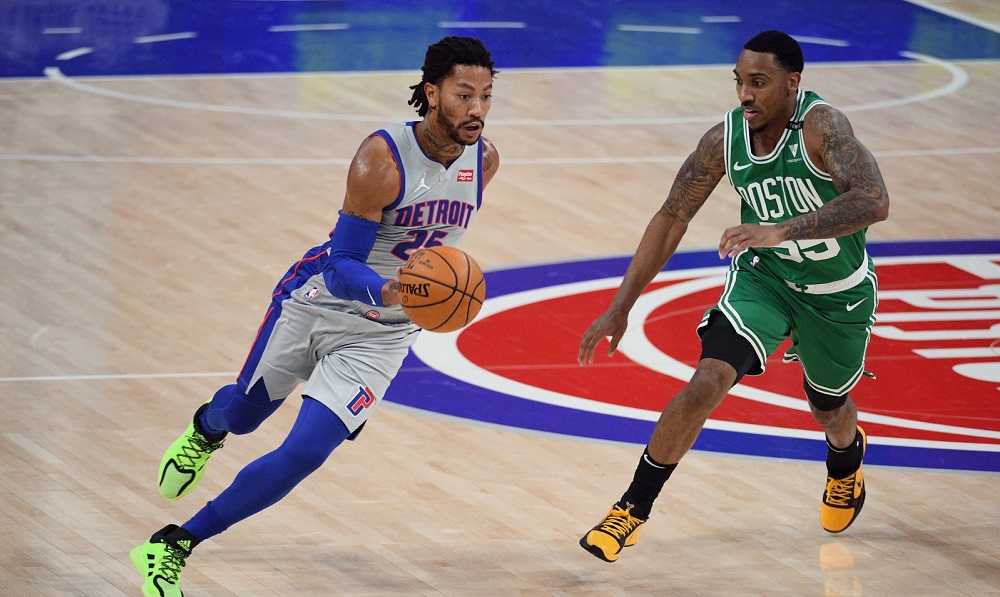 We were told that 2021 would be better than the horror show of 2020. Well, as far as the Celtics are concerned, the first day wasn’t so great.

The Celtics began Friday’s game doing everything wrong, and offered no resistance while Detroit did everything right. The Pistons led by 18 after just 8 minutes. That’s hard to do if both teams are competing – but the Celtics weren’t.

Marcus Smart on the Celtics slow start: "We wasn't ready. We came out lackadaisical. Plain and simple."

Seven turnovers and 5-of-19 shooting from the field for 12 points.

Those are the numbers that tell the story of the Celtics’ rough first quarter against the Detroit Pistons on Friday. […]

The Celtics didn’t seem up to the task at the beginning of the game, but the lack of productivity was compounded by Detroit’s energy to start the game. The Pistons led 27-12 at the end of the first quarter and scored 12 points in the paint in the first seven minutes of the game.

“To be fair, give credit to Detroit,” Brown said. “They started off with a great pace. Great energy. We didn’t match that out the gate.”

Even when something went Boston’s way…

…it really didn’t. Replay review disallowed this hoop, taking 3 points off the board in an eventual 3-point loss. One-tenth of a second matters a lot in the NBA.

Down 15 at the half, the Celtics proved the NBA maxim that no lead is big enough. Led by The Jays’ combined 38 points on 16 of 27 shooting in the second half, the Cs surged in front and looked ready to escape with their third straight win.

The Celtics’ comeback from a 21-point deficit against the Pistons on Friday was slow and steady. But when Boston pushed ahead by 5 points with just over four minutes left, it looked like the superior team had done enough to flick away a mostly forgettable night and move on to the next one.

The problem was that after Jayson Tatum hit a 3-pointer at the 4:15 mark, Boston never scored again, as one open look after another thudded off the rim, and the Pistons, whose execution down the stretch was hardly flawless, escaped with a surprising 96-93 win.

Globe: Celtics rally, then blow late lead and other observations of their loss to the Pistons

Most of those were good, open shots, created by drive-and-dish action and ball movement. Most notably, both Jaylen and Jayson got wide open looks off set plays after timeouts. The shots just didn’t go in.

Make no mistake, however. As costly as the late scoring drought was, the game was truly lost in the first half.

Brad Stevens on the Celtics missing so many open shots in crunch time: "I think that was the Basketball Gods' way of telling us to start the game better."

Final thought: On Wednesday, the Celtics played a young Memphis team that was struggling without its two best players, both injured. The Celts blew them out with a high-energy attack that never allowed  the Grizzlies to even think they had a chance.

In Detroit, it was the opposite. The Pistons were 0-4 and missing their best player, Blake Griffin, yet the Celtics didn’t display the same focus they had vs. Memphis. That will happen over the course of the NBA’s long season, as will unexpected losses.

Still, watching it happen in real time is frustrating. The best teams avoid those inconsistencies, and when they can’t, they find ways to win anyway – regardless of Basketball Gods.

Will the Celtics figure out all that? We might get our first clue from the Detroit rematch Sunday afternoon.

On Page 2: Overreacting to rookies

The Celtics took Aaron Nesmith with the No. 14 pick in the 2020 NBA Draft. Bey went to the Pistons five picks later at No. 19.

Nesmith has played a total of 29 minutes through six games, while Bey dropped 17 points while hitting five 3-pointers in 30 minutes Friday night.

I'm not saying this because I don't think Aaron Nesmith can become a good player. It's way too early to know what he'll be. But watching Saddiq Bey I can't help but think he's the player the Celtics really could use off the bench

Speaking of frustration, I posted John’s tweet here because I had the exact same thought while watching Bey torch the Celtics. Granted, it’s a premature, unfair judgment. The two rookies are in different situations. Perhaps if they switched teams, Nesmith would be the one putting up numbers.

Yet, we’ve seen this before. RJ Hunter and Carsen Edwards were known as shooters, but when they were drafted by Boston, they forgot how to shoot. The Celtics can’t afford to have that happen with Nesmith. Although I always try to be a rational fan, a voice of reason, deep down that’s the sort of thing I worry about. On this topic, I reserve the right to overreact.

Yes, I know Nesmith has barely played yet. Obviously, the Cs are only six games into the season. At the same time, however, there must be a reason he can’t get on the floor. I mean, Payton Pritchard was scoreless last night, but that won’t make him lose his spot in the rotation. Brad trusts FastPP; he does not yet trust Nesmith.

I won’t feel better about this until Nesmith A) figures out what he must do to get consistent playing time, and B) hits his shots. In all likelihood, B won’t happen until A does.

And, finally… Winning the gimmick title

Teams are trying lots of gimmicks to compensate for the lack of live fans. Some thought about carrying over the virtual fans from the bubble, sources say, but that apparently proved expensive and cumbersome. The Kings have populated the lower bowl with cardboard cutouts of fans and former Sacto luminaries.

But the Celtics take the early-season gimmick title for lowering their championship banners behind each basket:

It dawns on you how big those suckers are. There is something poetic about huge banners looming over the game. It is an unspoken reminder that winning a title is the point of this whole enterprise. Beyond all the bells and whistles — marketing campaigns, Instagram nonsense, transaction mania, hype videos, endless new uniforms — stands the ultimate goal of a championship.

Just as those banners are giant and hang forever, if you are part of a title team, you become a historic giant in that city forever.

This was a cool shoutout for a brilliant idea from the Celtics’ game operations people. I’ve not read or heard even one person say they don’t like using the banners as a backdrop.