Boston Celtics double-big lineup: Why it struggles, and how to make it work 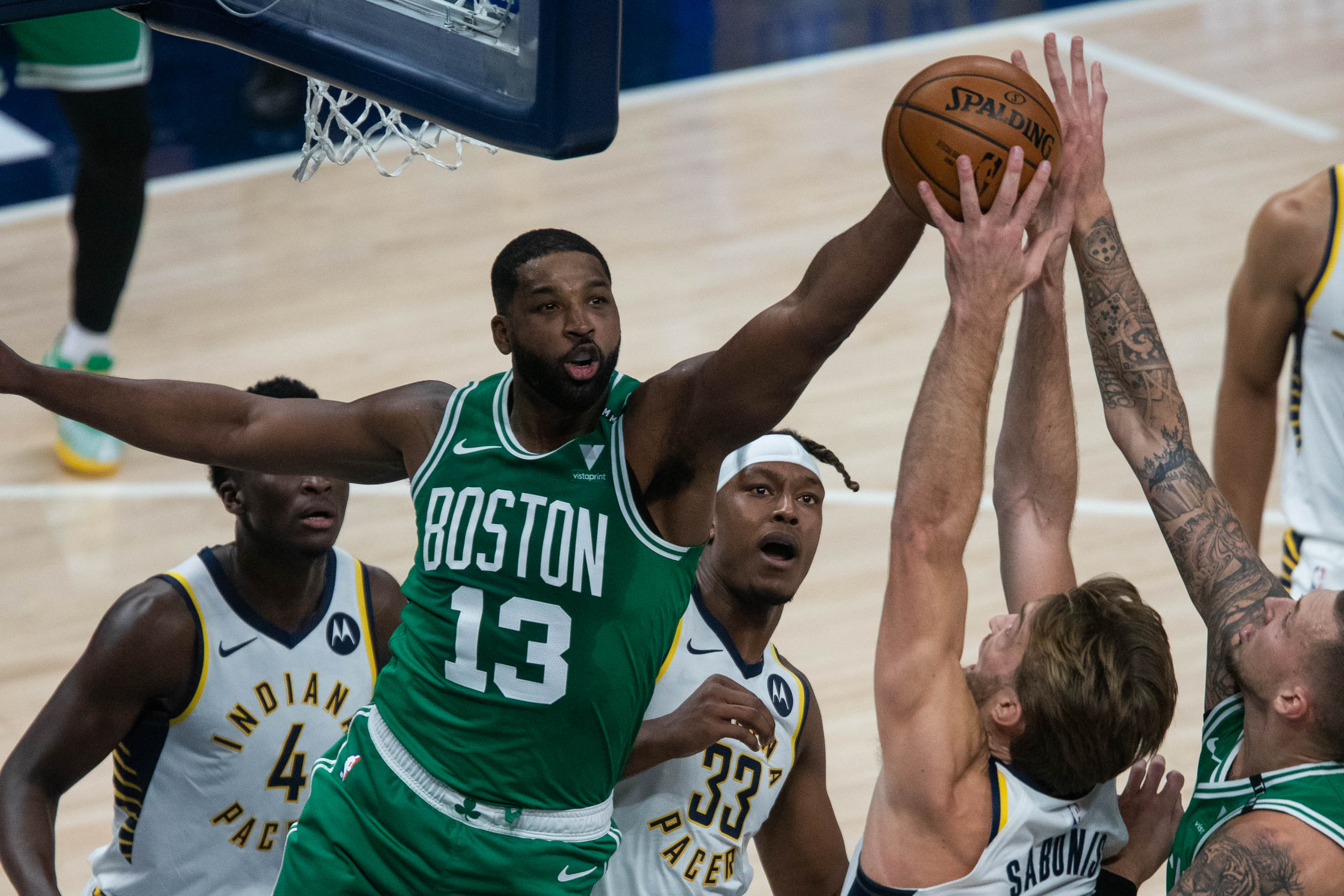 Boston Celtics double-big lineup: Why it struggles, and how to make it work

The Boston Celtics double-big starting lineup has been the source of a lot of angst among fans recently. Some of that is very understandable. Through five games (Tristan Thompson sat out the Memphis game), the starting lineup of Thompson, Daniel Theis, Marcus Smart, Jayson Tatum, and Jaylen Brown has a net rating of -19.4, one of the worst regular rotations in the NBA so far.

However, it’s not without its merits. There are times when it has worked well. The problem for Brad Stevens and the Celtics is that the returns on this lineup experiment have seen wild swings, and that’s costing the team.

“To be honest with you, it’s probably been too inconsistent to draw a conclusion,” Stevens said after the team’s Saturday practice. “But maybe that is the conclusion.”

Inconsistency might be the hallmark of this group. In the first game against the Indiana Pacers, the starters outscored Indiana by seven in the first quarter and then lost their third quarter minutes by 14. In the second Indiana game, the starters were, again, a plus-seven in the first quarter but Stevens pulled the plug on it after just 3:44 of the third quarter where they were outscored by seven.

So why does it work sometimes and not others? What’s the root cause of this inconsistency? Can it be fixed or should this lineup be trashed?

Let’s start with the basics.

Why is this lineup being used?

“It was a function of I was really upset with how we played up to this point and I wanted to start a very, very good defensive lineup,” Stevens said after unveiling the group in the season opener against Milwaukee.

Like everything with this lineup, the defense is inconsistent, and so far has led to a 113.7 defensive rating. Obviously there’s plenty of room for that number to improve in the early going, but it hasn’t been overly effective.

Some of this has to do with the opponents they’ve faced. Thompson was asked to guard Giannis Antetokounmpo and Kevin Durant in his first two games. This lineup was outscored by a combined 10 points in those games, which is actually not horrible considering what they were asking Thompson to do.

A big part of this group’s defensive issue is their propensity to give up transition baskets. This lineup only plays 11.2 minutes per game, but opponents are averaging 6.8 fastbreak points and eight assists per game. Basically, you can expect this lineup to give up three or four run-outs per game, which is outrageous when you consider it almost literally only plays the first five or six minutes of each half.

In fact, this lineup has never been used in the second quarter yet and it has a combined 1:31 of fourth quarter minutes. The Celtics have had this lineup on the floor for only 19.6% of their possessions, but opponents are averaging 28.2 points on 52.8% shooting.

The numbers are bad, there’s no denying that at all.

but they are being inflated by two horrific stretches: the third quarter of the first Indiana game, and the start of Friday night’s game against the Detroit Pistons. Boston was outscored by 14 points in 4:20 by the Pacers and by 11 points in 5:59 against Detroit. If you actually throw those two quarters out, this group has only been outscored by one in all its other time on the floor. The small sample is prone to wild swings, and two good quarters against Detroit today could erase a lot of these numbers.

The poor third quarters make this lineup look worse than it really is. There is plenty of blame to spread around. The perimeter defense has to be better because the Celtics have Daniel Theis at the four instead of Gordon Hayward. The lateral movement and recognition on the wing isn’t the same, and it results in Theis sometimes being a half step behind.

“The four is a new position for me. Something different,” Theis recently said. “Five is my natural position. I know my spots, especially in our system in the pick and roll… it’s a different view for me, not being directly involved in the pick and roll, stopping the ball, so I’ve got to see more on the help side and see my man as well, just like playing offball defense more than being on the ball as a pick and roll defender.”

This play, for instance, shows how Theis is still learning how to operate off the ball.

Theis reacts to the cutter down the lane and closes out a little too awkwardly and out of control. It lets Myles Turner blow by him for the dunk. Rather than running out and planting as if he was going to jump and challenge the shot, Theis needed to be under control and already angled to force Turner to his left, towards the baseline where the out of bounds line acts as a second defender.

Even so, there aren’t many instances of Theis being the main issue defensively. The defensive issues in this lineup have often started on the wings, and once the defender penetrates that line of defense they can then dump the ball off to the rotating big man’s guy. Frankly, some of these defensive numbers will level off with some more effort.

“It’s going to take a ton of effort on both ends of the court,” Stevens said before today’s game. “When we are slow to react, defensively, when all five guys are not engaged in the play, or when we’re not spaced well offensively, and all five guys aren’t engaged in the play, we’re not a very good team. It all starts with us all being very good at our jobs on both ends of the court.”

Spacing is certainly a problem with this lineup on the offensive end, and there are a few different reasons.

First, the Celtics don’t have anyone who can consistently break down the defense off the dribble. Marcus Smart is a very good point guard but he’s not blowing by anyone at the top of the key on a consistent basis. With two bigs on the floor, perimeter players with the ability to get into the paint without a pick can cause defenses to collapse and lead to easy baskets

Without this consistent threat, the Celtics are relying on picks from their bigs to start their offense. The quality and spacing of these picks is imperative for the offense to succeed.

Thompson isn’t a shooter, so he primarily rolls on his picks. That means he has to set his picks higher for them to work. For example, this high pick and roll with Tatum allows the room to attack, collapse the defense, and find Smart for a corner 3-pointer.

However if the action starts too low, Turner’s roll just adds another body in the paint.

Here’s a play that’s a great example of both.

Thompson’s screen starts below the free throw line, so Brown had nowhere to go. Theis’ subsequent screen for Tatum was up high, so Tatum had space to operate and ultimately find Smart for another 3-pointer.

Another issue on offense is that teams aren’t respecting Theis’ shooting ability, probably because he’s only shooting 2-for-14 from 3. 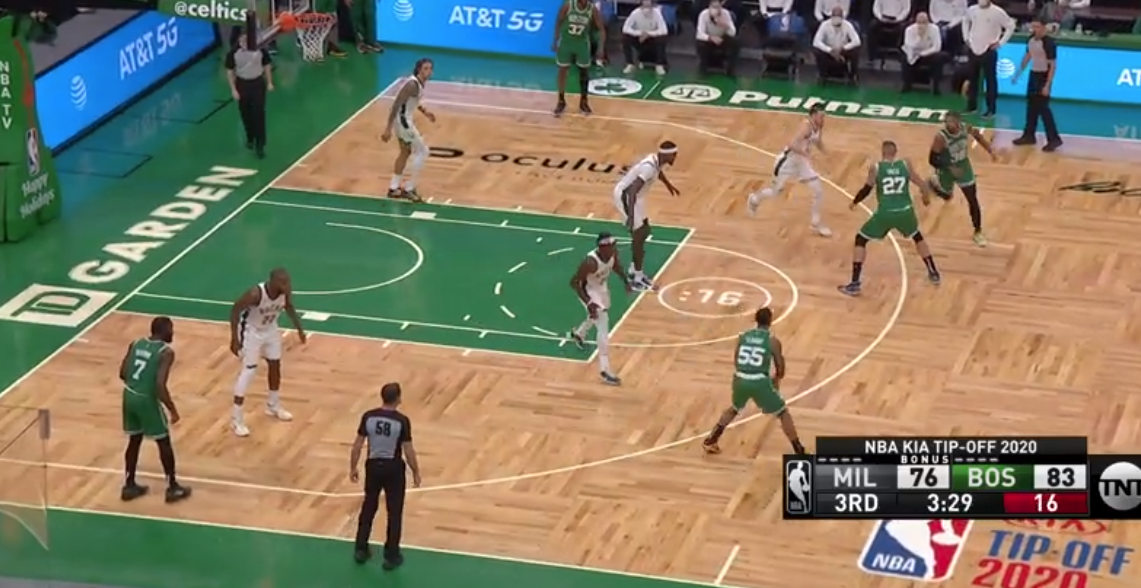 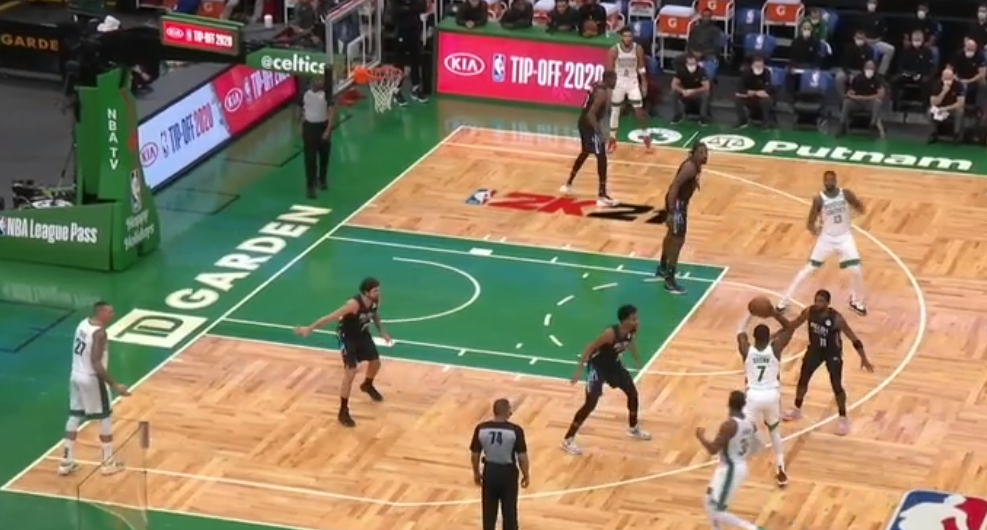 Joe Harris isn’t too afraid of Theis burning him even if Brown turns and hits him with the pass. Khris Middleton isn’t about to let Brown catch the ball in that spot because he’s much more dangerous.

Theis needs to find his shooting touch to make the spacing work for this lineup. One of the offensive advantages this lineup should have is the combination of Thompson’s rolling and Theis’ popping ability.

In fact, one solution to some of the spacing issues would be to make sure Thompson is the primary high-screen setter and Theis is the primary elbow screen setter. Thompson’s high screens allow ball handlers to get free with a lot of room to attack and pick a defense apart while Theis’ pops off elbow screens should have a similar effect.

Theis should probably be a spacer on the opposite corner of the action. If teams aren’t respecting his ability to shoot, then he shouldn’t be on the same side as a Thompson pick. That space should belong to a real threat that draws a defender. Theis can wait until his guy overreacts to a paint touch, then he can get a much more wide open 3-pointer.

Again, a lot of this lineup’s problems boil down to effort. Defensively, they have to stop giving up so many transition baskets and stay in front of players on the perimeter. They give up too many easy baskets and teams are racking up assists on them because of it. That’s on everyone.

Offensively, they need to be more disciplined about who’s doing what and where it’s being done on the floor. That can come with repetition and recognition. If a wing does end up getting a screen from Thompson at the free throw line or lower, look to give the ball up quickly instead of walking right into the teeth of a double team.

This lineup hasn’t been good, but it doesn’t mean it can’t be good. It’s early, but it has provided at least some evidence of its potential. The bigger question may be whether mining that potential is worth the pain in this process.

“That lineup has so much potential defensively because a lot of us can switch,” Thompson said. “offensively, our team is so much smoother with the ball, whether it’s dribble-handoffs or pick-and-rolls to wide pin-downs. The double-big, I don’t think it’s an issue at all. When you look around the league, whether it’s Indiana or other teams around the league – Lakers, Clippers at times – a lot of teams play two bigs. And you can make it work, it’s just a lot of movement.”