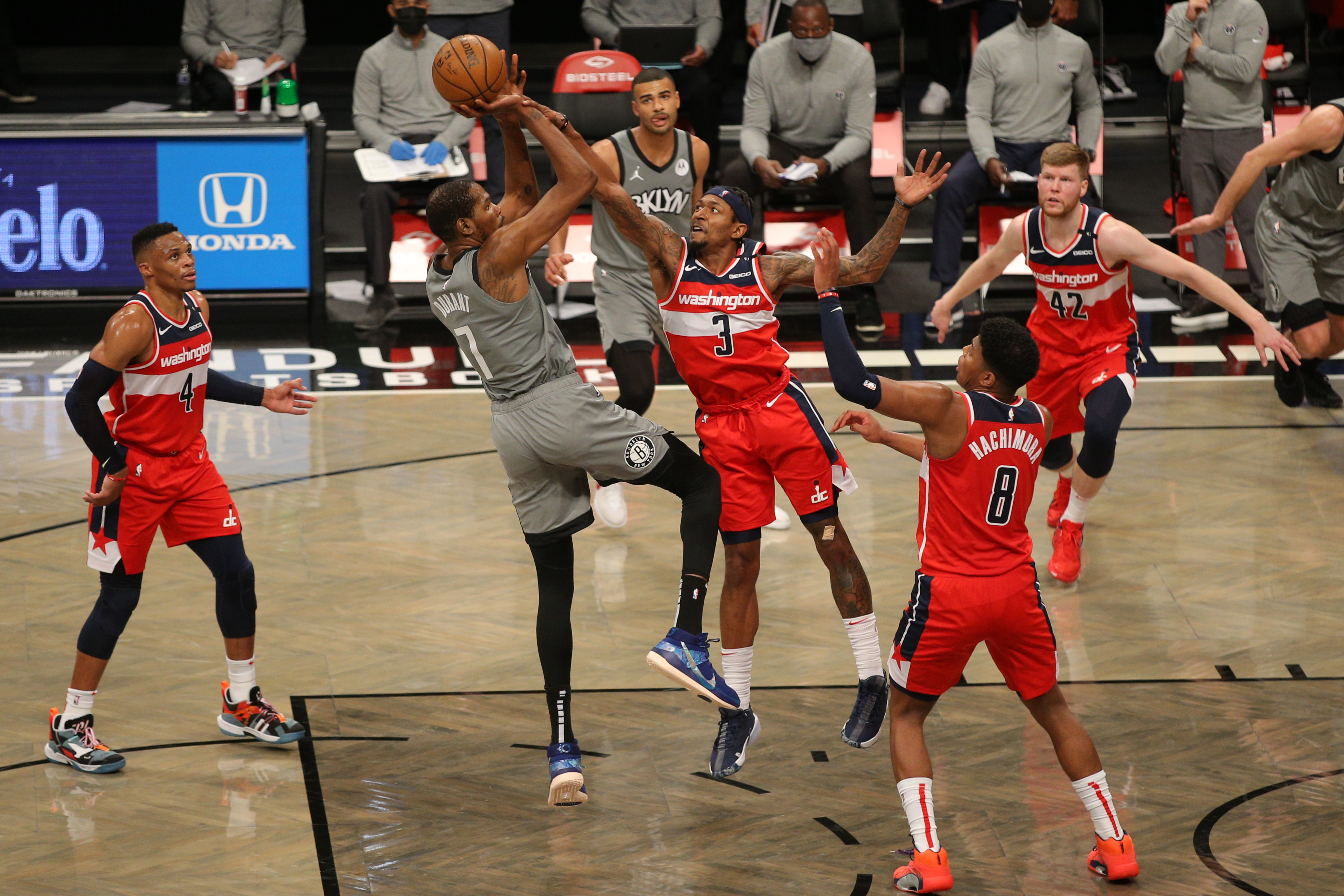 Despite a miserable 0-5 start to the season against sub-par competition, do not write the Washington Wizards off. They still have the talent to get things turned around and into the playoff picture and that starts with wins against the better teams in the NBA including the Brooklyn Nets. Despite Kyrie Irving and Kevin Durant combining for 58 points, the Wizards were able to get a late bucket and survive defensively to pull off the upset. Here are five takeaways as well as Scott Brooks, Thomas Bryant, Bradley Beal, and Russell Westbrook’s postgame media availability.

In Bryant’s last three games, he has 57 points on 26-for-30 shooting (87 percent). With no real offensive scheme besides get out and run in transition, this is Washington’s most reliable offense with defenses keying in on Bradley Beal and Russell Westbrook. Bryant has been strong about finishing around the rim even through contact. Scott Brooks spoke to Bryant channeling his limitless energy better, which has both Beal and Westbrook thinking the sky is the limit for the 23-year old center that Tommy Sheppard upfront told free agents is the organization’s starting center. Being in the second year of a three-year, $25 million contract is looking team-friendly right now.

Bradley Beal willing to give the ball up

Even in previous seasons, Beal has always been willing to pass to an open teammate to get the team a better shot attempt if teams are blitzing him with double and triple teams. Beal finished the game with 27 points on 25 shot attempts and was held to two points on 1-for-5 shooting in the fourth quarter. The All-Star shooting guard described his late-game play as “God ass awful.” Regardless, Beal hit Bryant with the perfect shovel pass at the end of the game when old friend Jeff Green rotated over to stop Beal’s penetration against Joe Harris.

At the expense of Troy Brown Jr. and Isaac Bonga that were healthy sits, it is the Los Angeles Clippers acquisition, Robinson that is seeing the most consistent playing time out of the wings off the bench. Although not scoring and missing all three of his shots from the field in 12 minutes, Robinson did bring some positive defense drawing three offensive fouls to add to Brooklyn’s 20 turnovers on the night. A self-proclaimed shooter that can also defend, Robinson’s confidence has not necessarily translated much on the court for Washington but he is getting his chance to prove it. It will not be surprising if Brown and/or Bonga receive a bigger opportunity soon as Brooks continues to experiment without carrying what fans perceive.

Davis Bertans on, Deni Avdija off in crunch time

Twice in three games, Avdija was not on the floor at all in the fourth quarter, which often seems puzzling given his above-average defense for a team that struggles in that department. With Bertans seemingly off any minutes restriction with his conditioning improving, Brooks is opting for his experience and larger shooting threat although one could argue Avdija has proven to be at least in the ball part of the same percentage shooter as Bertans. It may have been more situational against Brooklyn as Rui Hachimura was taking the primary defensive assignment against Kevin Durant allowing Bertans to simply defend Joe Harris, a similar player to himself, but Avdija needs more playing time moving forward, especially when your other defensive stopper in Bonga sitting by coach’s decision.

Brooklyn had 28 points on 12-for-17 shooting on the fast break and even with Washington limiting their turnovers to seven, the home team cashed them in for 15 points on the other end. Before the game-winning dunk from Bryant, Timothe Luwawu-Cabarrot had an inexcusable leak out layup following a missed three-pointer from Russell Westbrook. That could have been the game loser as the Nets had 12 fast-break points in the fourth quarter alone. Brooks was not happy at all with it and the Wizards will need to get that cleaned up as they will not be happy with the outcomes in the long run.