5 rational thoughts about the Celtics last-second win in Detroit 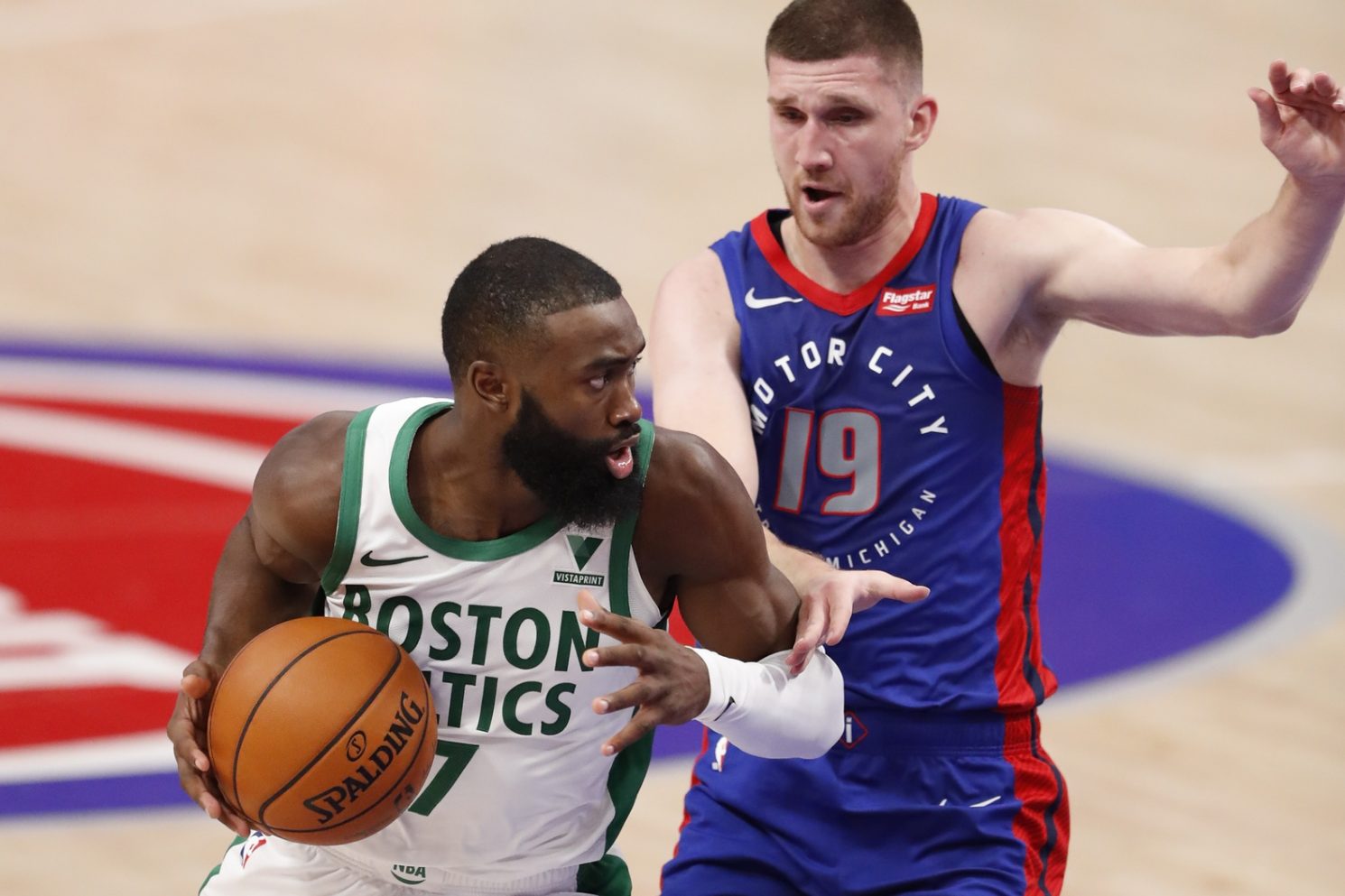 5 rational thoughts about the Celtics last-second win in Detroit

When tweeting out the recap for this game, I said I was just glad it was over. Glad the Celtics won, glad they were leaving Detroit (a team with whom the Cs always seem to get into high-scoring gunfights with, regardless of roster specifics). But it’s still important to conduct autopsies of games like this, and there were some clear conclusions to draw.

1. No one was playing defense, but that doesn’t mean the Celtics shouldn’t have been!

“Defense” in this game, for both teams, basically boiled down to each squad’s bigs occasionally jockeying under the basket trying to block or box out and not necessarily succeeding. There was virtually no contesting any shots made on the perimeter or in the big gulf of the midrange. Few if any successful closeouts or traps. They couldn’t force significant turnovers, either (9 on Detroit, compared to Boston’s 17). Final field-goal percentages for both teams came in at 56.3% for Boston and 47.7% for Detroit. (The Cs’ win is so narrow because the Pistons had a massive edge in free throws, which itself speaks to defensive flaws of the defense, at least to an extent.)

Detroit currently has the 28th-worst field-goal percentage in the league, at 42.4%. I understand why Boston took it easy in the first game (well, up to a point), but after one embarrassing loss it behooves a team not to repeat the mistake of underestimating the same opponent in a successive contest. While many games remain to be played, the Celtics have a bit less breathing room than other teams—with the return date of Kemba Walker still a mystery, falling into any significant rut could be harder to climb out of than it would be in a vacuum. Which leads me to…

2. Teague has been uneven, but his extended absence would still be a problem.

If Jeff Teague was the team’s intended starting point guard in Kemba’s absence, he’d be making more than vet minimum. Teague knew what his role would be and seemed happy to take it after several depressing years in Minnesota and an even bleaker half-year in Atlanta. He’s no longer an ace scorer, but his three-point shooting and playmaking is still there.

Point being: If Teague’s out for longer than a game or three, can the answer really be “start Payton Pritchard!” We’ve established Pritchard is good. We’ve established that, more likely than not, he’s an NBA-caliber player, with impressive court vision, solid jump shooting and even some SMARF-adjacent (if not SMARF-quality) instincts on defense. But can we say with confidence he’s ready to play at least 25 minutes a game? He’s averaging 21 and just this last game played his season max (27:35). So I guess we’ll see?

While it might not be viable as an all-the-time starting unit, Tom Westerholm yesterday pointed out one successful lineup we saw get some run:

Sure feels like the Pritchard/Smart/Tatum/Jaylen/Big lineup makes a good amount of basketball sense.

Basketball Reference confirms this is a). one of the only Pritchard lineups to have accrued double-digit minutes and b). that it’s statistically sound, with a net rating of +4.3 points per 100 possessions. The most common Pritchard lineup is even better: In the approximately 21 minutes the Oregon guard has shared the floor with Jayson Tatum, Jeff Teague, Robert Williams and Semi Ojeleye, that lineup boasts a +27.6 per-100 net rating.

To briefly address the room’s elephant—the Tristan Thompson/Daniel Theis starting lineup—the stats are not kind to it. The Celtics starters, in just over 73 minutes sharing the floor, have a dismal per-100 net rating of -13.7. In fact, that lineup is a net negative in almost every category, except turnovers, rebounding and free throws. That seems, uh, bad! (More puzzling is that every Theis lineup with significant minutes this season is a net negative; that’s such a marked contrast from last year, so hopefully this is an aberration that’ll correct itself.)

By contrast, looking at Thompson’s lineups potentially disproves my worry about starting Pritchard: A lineup where he complements Tatum, Brown, Smart and Thompson has a +4.3 net rating in 11:45 minutes on the floor and is positive in nearly all categories. That’s not a lot of time together, but shorthanded as the Celtics are, why not gamble a bit?

I’ve given up trying to pin down Semi Ojeleye’s abilities or NBA destiny. His triples in the 4th of this game were much-needed, and thus far this season, his shooting percentages are better than ever (38.5% from deep; totally respectable). He’s also part of one of the Celtics’ best lineups.

He’s also steadily declining on defense based on points allowed per 100 and turns over the ball 10.7% of the time it sees his hands. (That’s very high for a player with low usage.) He seems like an exceedingly kind human being and definitely has a basketball future, but would he be seeing the floor if Brad Stevens had any confidence in Aaron Nesmith or slightly more confidence in Grant Williams? Doubt it.

I could probably just close this out with those words, but I have a more distinct point to make: The leap Brown is making seems so pronounced, particularly in terms of offense, that it’s tempting some Celtics fans to wonder if Jaylen might actually be better than Jayson. This seems shortsighted.

#Pistons Dwane Casey on Boston's Jayson Tatum and Jaylen Brown: "They're two of the most dynamic players with the ball that I've seen in a while."

That’s all there is to it! Both of them are Boston Celtics and will be for many years to come. Both of them are already playing amazingly high-level basketball. The start of this season hasn’t been a cakewalk, but let’s not discount the distinct excellence of these two players by fretting over comparisons.