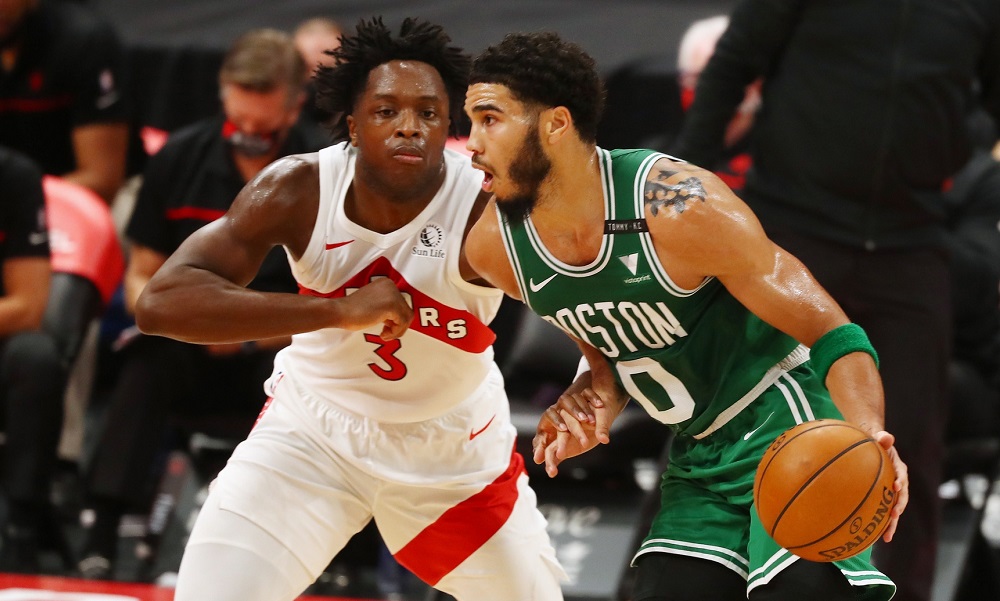 The Hospital Celtics were back, but no worries. Jayson Tatum went off for 40 points (11 of 19 shooting plus 13 of 13 free throws) and rookie Payton Pritchard came off the bench with career highs of 23 points and 8 assists to lead the Celtics to a fairly easy win over the Toronto Raptors, 126-114.

The game was played in Tampa, Florida, the Raptors’ temporary home during COVID. A limited number of fans were allowed in the arena because Florida DGAF.

Bad news before tipoff: The Celtics were very shorthanded.

#NEBHInjuryReport update – Marcus Smart has been downgraded to OUT. https://t.co/4GrrzIUZSD

Celtics starters against the Raptors in Tampa tonight…

A mild surprise was Tristan Thompson being in the lineup on the second night of a back-to-back. He had sat out the last time they had a B2B while returning to form from a strained hamstring.

The first quarter resembled last Friday in the Detroit loss, which is to say awful.

Raptors are 8-of-9 from the field and have scored 22 points in five minutes.

How shorthanded were the Cs?

Aaron Nesmith with three fouls in the first quarter. Guarding Kyle Lowry when the Raptors are in the bonus is always treacherous.

It was a poor quarter for Boston, but it could’ve been worse.

Good look from Pritchard and a nice catch and finish from Ojeleye here. They've both given the Celtics some very solid minutes in this first half. pic.twitter.com/AcmLgiGvQH

It got better. Much better.

It's Tatum's turn tonight… and that last pass to Pritchard was smart. Celtics started taking care of the ball and they are blistering hot as a team from 3.. now up to 10-16 from deep

The halftime situation was pretty sweet, thanks to huge contributions from the bench and Tatum going supernova.

Jayson Tatum shot 10-of-10 from the free-throw line during the first half. His career-high for FT makes is 13.

Grant played the entire 2nd quarter. The Celtics won that quarter by 24

Let’s check in with an old friend…oh.

Aron Baynes had a pretty disastrous first half for the Raptors, going 0-5 https://t.co/oTgOIPszIG

Nothing was going right for Toronto/Tampa.

Tatum stayed hot in the third.

And FastPP (who outplayed Kyle Lowry!).

Toronto scored 35 in the third, but at the buzzer, the Cs had added to their lead anyway.

In the fourth, this basket summed up Tatum’s night.

This has to be so frustrating as a defender. Tatum up to 40 with this shot: pic.twitter.com/yX0yr1bFg7

In garbage time, Toronto cut the lead to 10, forcing Brad Stevens to send starters back in, which made no one happy. But it never got any closer.