5 rational thoughts about the Celtics beating the Raptors 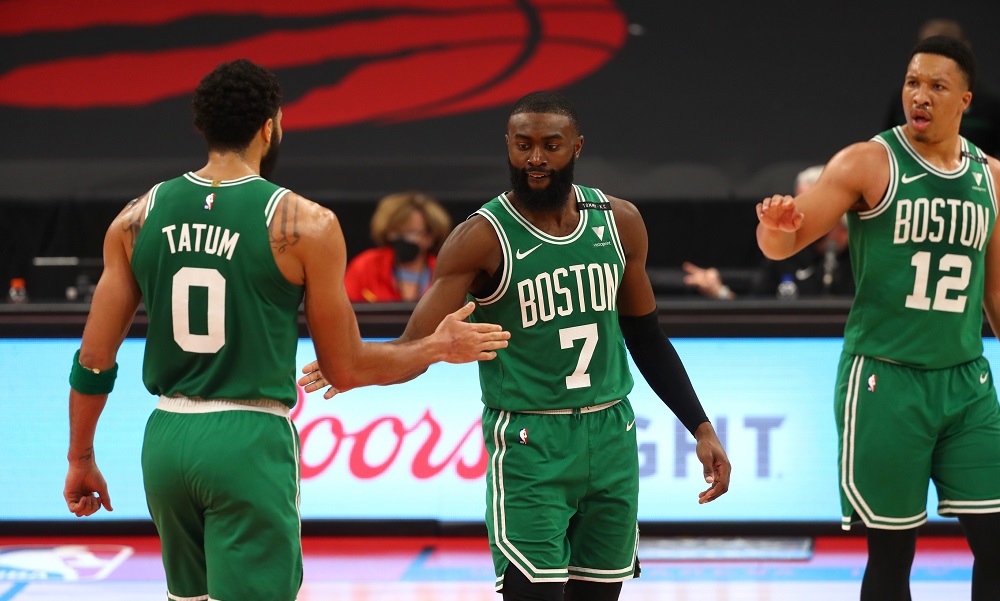 5 rational thoughts about the Celtics beating the Raptors

It wasn’t perfect, but there was plenty to like about the Celtics’ win at Toronto Tampa last night. The Raptors are struggling with a 1-5 record, and the Cs (5-3) did not let them off the hook. Some follow-up thoughts:

How sweet it is to have arguably the best young tandem in the league right now. Jaylen Brown and Jayson Tatum are getting everyone’s attention, mainly through their offensive exploits. Both rank in the NBA’s top five for total points scored, and both are currently enjoying their best seasons for points per game.

Last week, Jaylen set a career high with 42 points even while sitting out the entire fourth quarter of a blowout win. Last night was something of a quiet game for him, and he still scored 19 points.

Meanwhile, on Sunday Jayson set a career high with 12 assists (and 0 turnovers) against Detroit, capping that off by swishing the game-winning shot and then blocking a Pistons three that could’ve stolen the W. Last night, he posted 40 points – just one off his career best – and would’ve had 42 if his toe wasn’t on the three-point line for two of his baskets.

Tatum has a usage rate of 30.6% and Brown is only about a point behind that, so obviously everyone understands that, for the foreseeable future, the Celtics will go as far The Jays will take them.

Here are the highlights of JT’s 40-point show.

Celtics bench combined to scored a season-high 60(!) points tonight despite Boston being down four rotation players.

He's the first Celtics rookie to produce 23+ points and 8+ assists in a single game since Antoine Walker on April 18, 1997

Sixty points from the second unit? Highly unusual, maybe even the best such performance in the Brad Stevens era. Payton Pritchard led the way with spectacular shooting (8 of 13 overall, 2 of 4 on triples, and 5 of 5 at the line), but Semi Ojeleye, Grant Williams and Rob Williams all went for double figures too. Gotta be a first.

Also, the bench dudes (plus Tatum) provided the energy and defense that turned the game around in the second quarter. The Raptors shot just 5 of 24 (20.8%) in the period as they went from an 11-point lead to a 15-point deficit.

Grant had not played a minute on Sunday, but didn’t sulk about it. Instead, he scored a season-high 14 points, shot 3 of 4 from the arc, and added 3 blocks. In one fourth-quarter sequence, Grant blocked a Raptors dunk attempt, then sprinted to the other end for a three-point attempt that bounced around and softly dropped through the hoop. Exactly what you want to see from him.

And let’s mention the Timelord, who looked like the rim-runner we want him to be. He slammed home dunks off alley oops and offensive boards and took down a career-high 15 rebounds (6 of them on offense). He’s now averaging almost 20 minutes per game, leading the league in offensive rebounding percentage (20.6%), and looking like he might now be on his way to being a difference-maker. Let’s see how much he plays Wednesday at Miami, with Bam Adebayo.

It wasn’t perfect for the bench, however. Boston was ahead 19 with under 5 minutes to play when Nick Nurse gave up and subbed out all his starters. Brad did the same. Suddenly, a flurry of Celtics turnovers and missed shots narrowed the lead to just 10 with 2:36 remaining.

Toronto had all the momentum, which forced Brad to reinsert The Jays and Grant. That shut off the rally, but it was somewhat embarrassing for everyone. Tatum let the young ones know it, too.

Jayson Tatum appeared to be pretty frustrated in that last huddle. Don't often see him being this vocal: pic.twitter.com/7tHdefbRie

All of Australia is still missed by many Celtics fans. Baynes was traded to Phoenix, and left there after one season. At the time, some of us were wishing that he’d return to Boston. Obviously, that wish was not granted, as he signed with Toronto as a free agent.

Have to wonder if Baynes would do it the same way again. His new team is struggling and last night was a disaster for him: in 13 minutes, he was scoreless on 0 of 5 from the floor. He was benched for the entire second half. All we can say is, hang in there, mate.