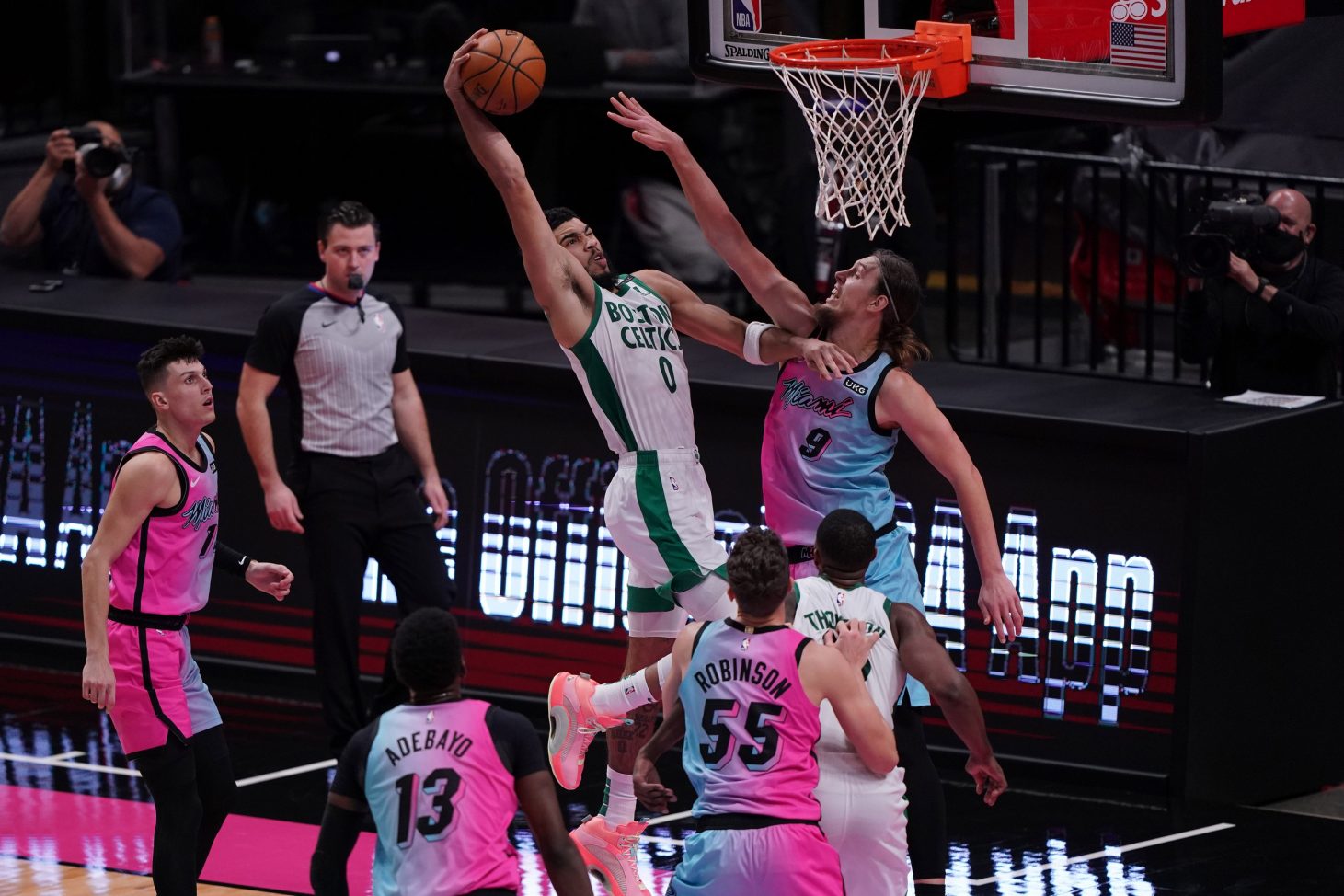 On yet another night when it felt incredibly bizarre to be writing about sports, the Celtics and Heat faced off for the first time since the Eastern Conference Finals. It wasn’t exactly a pretty one: After a mostly dominant first half, Miami broke through on drives for free throws and some serious defensive miscalculation by Boston. It took a last-minute offensive barrage by the Jays and Payton Pritchard’s improbable putback to win this one, but the Cs did, 107-105.

Jayson Tatum outdueled Jimmy Butler by a point to lead all scorers with 27 (alongside 5 rebounds, 4 dimes and a steal). Jaylen Brown didn’t shoot well at all by his standards but still racked up 21-12-5-2-2. Beyond that, scoring was pretty well-distributed across the team. Other more modest but well-rounded stat lines included Robert Williams’ 8-4-0-1-1 (in just 13 minutes), Grant Williams’ 5-6-1-2-1 and FastPP of all people racking up 4 offensive boards (alongside 6 points and 4 dimes).

to some this is seen as worse than what happened today btw https://t.co/p2KDMyq5kK

Celtics with an early lead against Miami!?! In order to stop bubble ptsd, STOP THE COUNT!

The expected offensive aggression of Jayson and Jaylen, coupled with a Heat team that looked discombobulated on both ends, brought the Cs to a double-digit lead in the game’s first 7 minutes. (If not for free throws, Miami would only have 7 points in that span.)

Boston's perimeter defense has not been great so far this season. Very up and down https://t.co/mWo3qstQHz

Wasn’t all perfect, of course; Miami’s too good an opponent for that.

Pretty nasty wraparound from Jayson. Think a major area for creation growth for him would be using shot and ball fakes working in the post and mid-range to generate looks for others. Reactions to his fakes will be extreme pic.twitter.com/EnIKrCtaZw

Cs having an elite offense without Kemba is very encouraging

Strong first quarter by the Celtics on what is definitely an emotional night.

For all my kvetching about Semi in a recent RATIONAL THOUGHTS post, he was in his bag tonight during Q2:

In the last three games, Boston has turned the ball over 59 times.

Almost everything went the Cs way in much of the second frame while almost nothing (except trips to the free-throw line) worked for the Heat.

Well, until things reversed in the frame’s final minutes, when Boston could hardly buy a shot and Butler grifted free throw upon free throw out of overzealous Cs defenders.

The foul itself is bad enough. That its his 4th is significantly worse. Why reach in there?

Every player is allowed a brain fart from time to time, but that's a tough one for Smart https://t.co/30WWIS9C17

Celtics have won 16 straight road games when leading by 17+. Last loss at Denver in November of 2018.

Yeah, I’ve seen this movie before. Kinda tired of it, TBH.

I'm glad he didn't listen and waited until they lost the lead. https://t.co/cq3icqaC5C

Thinking about Brad stevens and his double big lineup pic.twitter.com/MQXRJ8IkU7

— New Yorker Who Voted in the Georgia Election (@SamSheehan) January 7, 2021

Thompson has been the worst player on the floor this game

The team regrouped and fought back to tie it up 80-80 at the end of Q3. And a couple of fan favorites played a big role:

PP and Rob are Electric together

pritchard to timelord is lob city

Pritchard and Rob Williams have had some nice chemistry this year. Imagine… this is only the beginning.

Not to mention Tatum’s relentlessness. Unfortunately, while he can do a lot by himself, he can’t do everything. Miami’s ability to drive at will was, once again, confounding Boston in a second half. Somehow, Carsen Edwards was on the floor:

(He didn’t look atrocious or anything, but it would in no way be accurate to say he was good.)

The Celtics don't deserve to win this game, so I'll be really satisfied if they do

At least it wasn’t the goddamn zone again. Not sure I could take more Zone Discourse.

After all that, it was Pritchard who saved the day at the last minute: