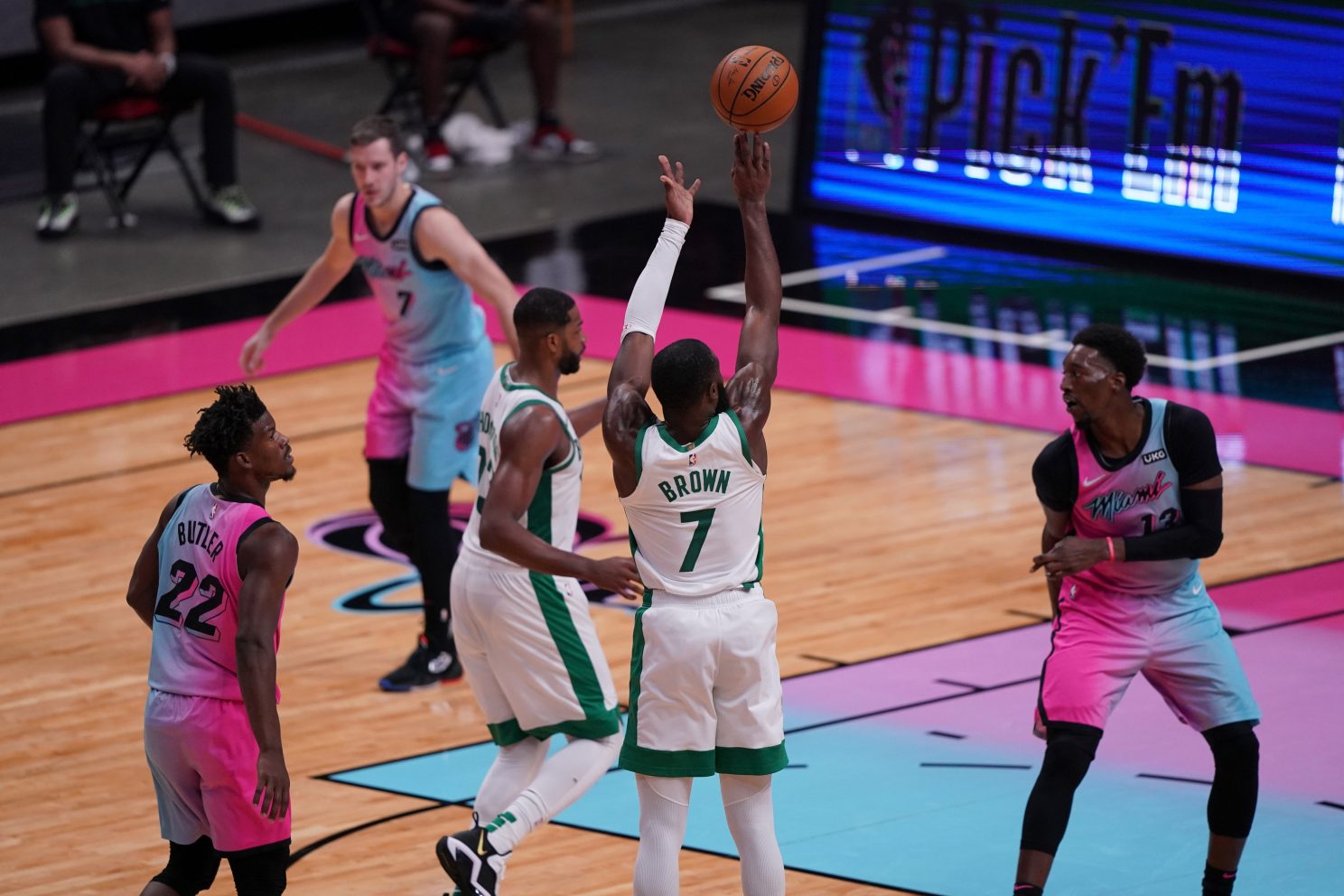 Hey, if the Celtics won games easily, that would be boring, right? Surely these come-from-behind, seemingly pulled-out-of-the-ass wins are fine for my health, right? Totally! It’s fine!

1. Let’s look at that game-winner once again.

I mean, that’s what you came to see, right?

Payton Pritchard could hit a slump sometime soon, or, more likely, will not have nearly as much to do when Kemba Walker returns to play in late January or early February (I think?). But it’s clear he can handle being a regular facilitator of the offense. More to the point here, while luck played a part in that last play, going for a putback when dudes who have serious size on you, like Bam Adebayo, are contesting it takes serious stones.

2. These teams are relative parallels of each other, which makes games unpredictable.

This was, in many ways, true even during the Eastern Conference Finals, when the Celtics and Heat had fewer direct player-to-player roster correlations. Now that there are more of those direct analogues—Tristan Thompson as the older, much more conventional Bam Adebayo—the results of games are even harder to guess. (Just so we’re clear, I like what Thompson brings, but he’s no Adebayo talent-wise. Nor should anyone expect him to be; he, unlike Bam, isn’t a focal point of the offense.)

For the teams themselves, it turns out like this: Sometimes it seems like Miami knows everything Boston will do, as when the accursed 2-3 zone  sends the latter’s offense into convulsions. Other times things like that are a non-factor (like last night). But on the other hand, sometimes it’s Boston’s defense that can’t handle relatively one-dimensional Heat players like Duncan Robinson (he only made 5 of his 11 triples, but that’s still 16 points when you add his one free throw) while limiting the more theoretically versatile Tyler Herro to 8 points. Long story short, drawing large-scale conclusions about either team from these matchups is a crapshoot.

3. Tatum-Butler is a marquee superstar showdown.

And it didn’t disappoint. Jayson Tatum won the duel on points alone (27 to Butler’s 26) and often couldn’t be guarded by Butler or any other Heat player whether in the paint or on the perimeter.

By contrast, Jimmy Butler’s ability to drive the lane and elicit superstar calls (which Tatum isn’t getting yet) means he’s a threat even when his shot isn’t falling (which it increasingly isn’t, especially outside of 10 feet). Butler could and did bait (or grift) fouls from just about every Celtics defender, including Tatum. So no matter what it’s always exciting—and tense!—to see these two elite forwards face off.

4. Brown’s bad shooting was an aberration; Smart’s off night hopefully was as well.

Jaylen Brown currently shoots 54.7% from the field and and 41.2% from deep. His previous games this season are full of video-game shooting percentages— 61.5%, 71.4%, 81.3%—and the arc of his career shows nothing but improvement as a scorer. This contest’s 34.8% on 8-for-23 doesn’t bother me much, especially when you consider how active he was in every other facet of the game: 12 rebounds, 5 assists, 2 steals, 2 blocks.

Smart’s shooting is and likely always will be streaky. That in itself isn’t the biggest deal. But when you couple that with boneheaded fouls on three-point shooters and other defensive miscues, it’s a bit more concerning. (There were some BS fouls called on the Cs last night; Smart unfortunately earned his.) Hopefully just the by-product of an intense game played in the wake of a very strange and stressful day.

5. Celtics fans are lucky to have Tatum and Brown both on and off the court.

Jayson Tatum and Jaylen Brown are one of the league’s best duos—the specifics of that ranking aren’t important. Who they are as human beings is just as remarkable. The NBA has no shortage of ambassadors for social justice; it’s fortunate that the Celtics’ stars are among the most perceptive.

As Brown said: “In one America, you get killed by sleeping in your car, selling cigarettes or playing in your backyard. And then in another America, you get to storm the capital and no tear gas, no massive arrests, none of that. So I think it’s obvious, it’s 2021, I don’t think anything has changed.”

The duo noted how sports can bring people elation and escape in these times. That’s important, and their gameplay is a testament to it. But if you expect them ever to stop using their platform to discuss the darkness in our world, I suggest you focus on different players or another team.