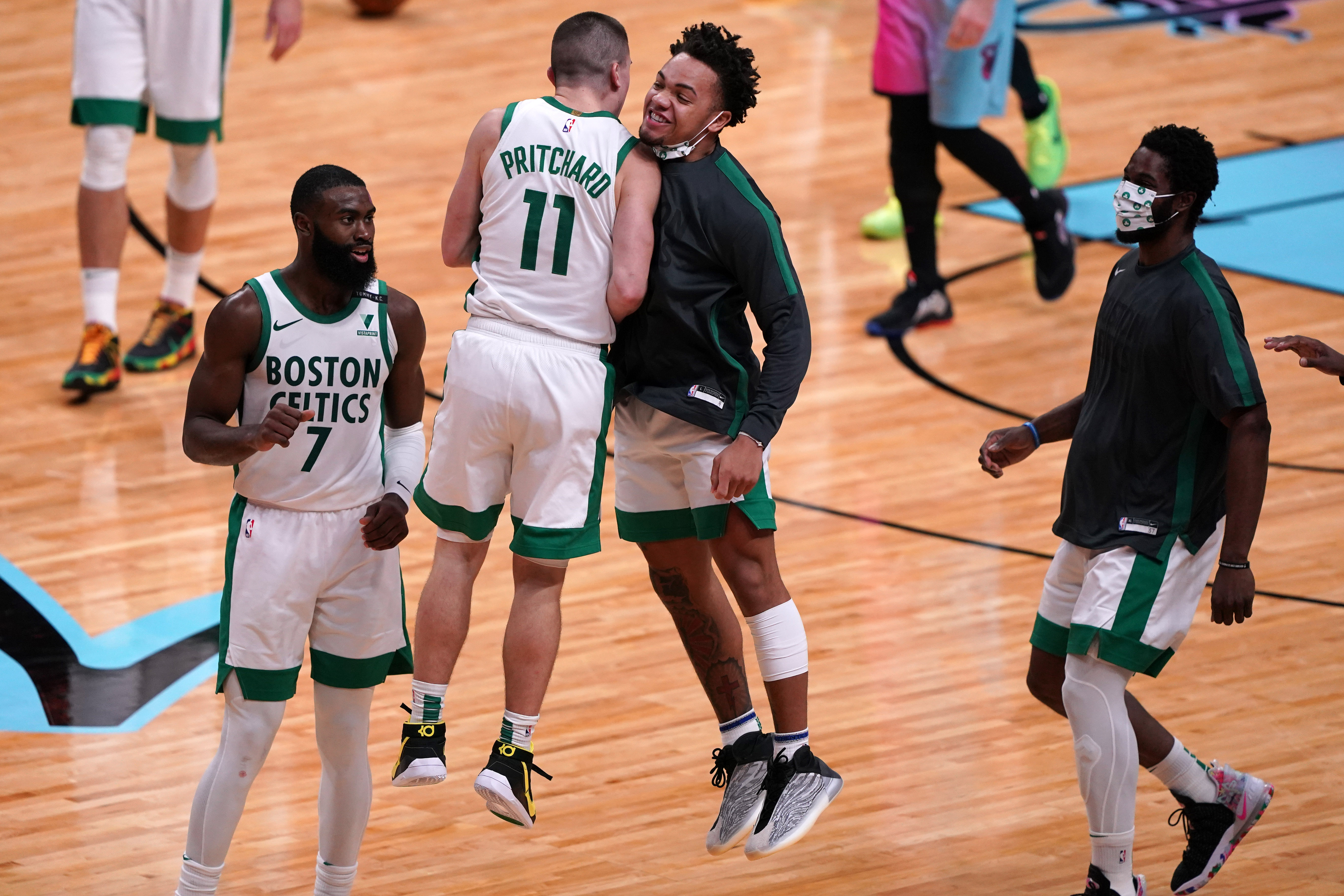 The Boston Celtics beat the Miami Heat 107-105 thanks to a Payton Pritchard game-winner. After the game, all off the talk was almost exclusively about the events in Washington earlier in the day and the lead-up to the game where it was almost not played. Here’s everything Brad Stevens, Jaylen Brown, and Jayson Tatum said after the game.

On whether the game was going to be played:

“We all met with 65 or so on the clock, and there wasn’t really time before when we were all here together to really talk. So we scrapped warmups, sat in the locker room and talked. To be honest, at 30 minutes I didn’t think we were playing. And then, coaches left the room, players finished talking and chose to play. I called my wife and told her I don’t think we’re playing, and 10 minutes later we had decided to.”

On his role in he decision:

“I told them very clearly that I support whatever they choose. I’ve said many times in these situations that everyone has a voice and expresses it a little bit differently. So it’s important in this small area – enclosed room – to feel comfortable to share, whether we were in there or after we left so the team could come to a decision. Just left it at that. If our guys chose not to play tonight, they had the full support of myself, my staff and our organization.”

On how the pregame energy translated to the floor:

“I just told the guys in the locker room, I think the things that you remember about coaching are not the game, right? It’s that locker room 68 minutes before, whenever we all congregated, I think that’s what I’ll remember most fondly when I’m done, are those moments. Just the sharing of real thoughts and emotions. And then to be able to compartmentalize and play a game, I thought that our guys started great, gave good effort, waned a little bit. More guys asking to come out than usual after long stints and I don’t know if that was a function of just playing hard early or being tired from the trip, or whatever the case may be. But they did a good job of going out there and playing under the circumstances. I don’t know how they do it. And I’ve said this forever in the NBA, like, you’re in the end of these road trips or back to backs. So I don’t know how they do it. But these guys have an unbelievable ability to go out and play at an incredible level. It’s, remarkable. Both teams.”

On what winning under these circumstances means for the team:

“Good game against a good team. We ended up winning it or not, it probably doesn’t mean we’re any different of a team. But it’s nice to nice to get a win. But I’d say the circumstances and all that we’ve talked about before is a lot more important.”

Brown: “Before we get started, we definitely want to speak to some of the things that’s been going on in our society. It reminds me of what Dr. Martin Luther King has said, that there’s two split different Americas. In one America, you get killed by sleeping in your car, selling cigarettes or playing in your backyard. And then in another America, you get to storm the capital and no tear gas, no massive arrests, none of that. So I think it’s obvious, it’s 2021, I don’t think anything has changed. We want to still acknowledge that. We want to still push for the change that we’re looking for. But as of yet, we have not seen it. We want to continue to keep conversations alive and do our part.”

On the pregame discussions:

Tatum: “Yeah, just to piggyback off of what JB said, it was heavy on our hearts. We was thinking about it. And unfortunately, we continue to be in the same situation. We just had an open space in the locker room to discuss these things, whether we were going to play or not, similar to the bubble. Like you said, it’s 2021 and we kind of continue to find ourselves in the same situation. And it’s tough because we’re not surprised by what we saw on TV. It’s just the world we live in. I just feel like the same energy should be kept as when we see our people peacefully protesting for things that we see our people getting murdered on TV and live and videos. And they’re protesting the capital, or rioting the capital for losing an election. It’s two different things. And I want the same energy on TV to be, you know, ‘they’re thugs’ and ‘they’re criminals,’ the same terms that they use when they see our people protesting for losing our lives. I think it’s bigger than basketball, it’s bigger than the game today. But I think that the statement of us talking about it, us going on the court on national TV could shed more light than us not playing. And that’s what we talked about in the locker room.”

On manifesting anger into something positive:

Brown: “It’s definitely two sides to a coin. Basketball of course is our profession and we’re blessed to be in this position. But we’re also men, we’re also fathers or members of our community as well. So when they hurt, we hurt. And we want to continue to be a voice for the voiceless. But sports is often used as a way to lift people up, it’s a way to spread joy. And that’s the decision that we came out here today with. And hopefully we got the win and we spread some joy today.”

On how having gone through these discussion in the bubble impacted the pregame conversation:

Tatum: “I think unfortunately being in the situation in the bubble and knowing we had the thoughts of cancelling the whole bubble and leaving but realizing that as the NBA, as players, and the platform that we have on national TV knowing that everyone’s going to be watching – and being in front of a camera – we can play the game, but when we get asked questions we can shed light and talk about the things that we want to express. I think this is a great way. And it’s going to have to continue, unfortunately, until we see real change.”

On compartmentalizing positive emotions of social justice efforts and events of past two days:

Brown: “Like Jayson said, I don’t think any of us was really surprised at the ruling or what happened transpired today. I think that America is kind of built on a lot of racism, that’s the foundation, and we don’t even flinch or shift out of any of those idea. I think it was common sense for a lot of people to be upset and things like that, so all of us felt the same way. But using this platform that we have is important to us. We are role models, we are members of our community, we do have people looking up to us, and we want the next generation to know where we stand. We want the next generation to know like, hopefully it’s better than this one. So we want to continue to keep those conversations alive. We want to compartmentalize, but at the same time, we want to voice our opinions through the media, through our platforms, through our influence to let people know this is not okay. There’s people that have lost their lives that we feel like shouldn’t have lost their lives, regardless of the situation. We think deadly force should be the last result in terms of handling an equation or a problem. That’s what we stand on. I think that we see so many people on camera, losing their lives and we have to explain that to our nieces or nephews, and it’s hard looking at them and telling them that it’s going to change. And then it’s not. So we want to just continue to keep having those conversations. As athletes our responsibility is more than just being a basketball player. We’re not here to just entertain and then go home. We are members of our community. You know, members of St. Louis or Duke or whatever and you got people that’s watching and looking up, so let’s try to use our platforms for good, and inspire some great change.”

On staying inspired after repeated incidents:

Tatum: “I think for me, I just think about our history, all the people that came before us that sacrificed their lives in a much bigger way that myself and him have opportunities to live out our dream. That doesn’t go unnoticed and should be talked about more. So I think we just have to carry that on any way that we can. Like we said, we’re role models, more than just basketball players, and our platform is huge. It would be wrong if we didn’t take advantage of that, the opportunities that we have and just to speak for all the people that don’t have voices like we do and share the same emotions and feelings that we’re feeling.”

Brown: “But we definitely want to express that it’s OK to be upset, it’s OK to be angry. I think that those two get confused. Like, we expressed ourselves through basketball today, in winning the game. But I think America has every right to be upset. We don’t want to encourage violence or anything of that nature but we definitely are tired of seeing the same things over and over again. So to feel that pain and that emotion, you can’t control how that necessarily is put out. But we want to continue to use our platform, because we obviously want to keep inspiring change and I want to believe that we’re doing the right thing.”

You can hear the entire postgame media availability from Tatum and Brown in the new episode of the Locked On Celtics podcast.