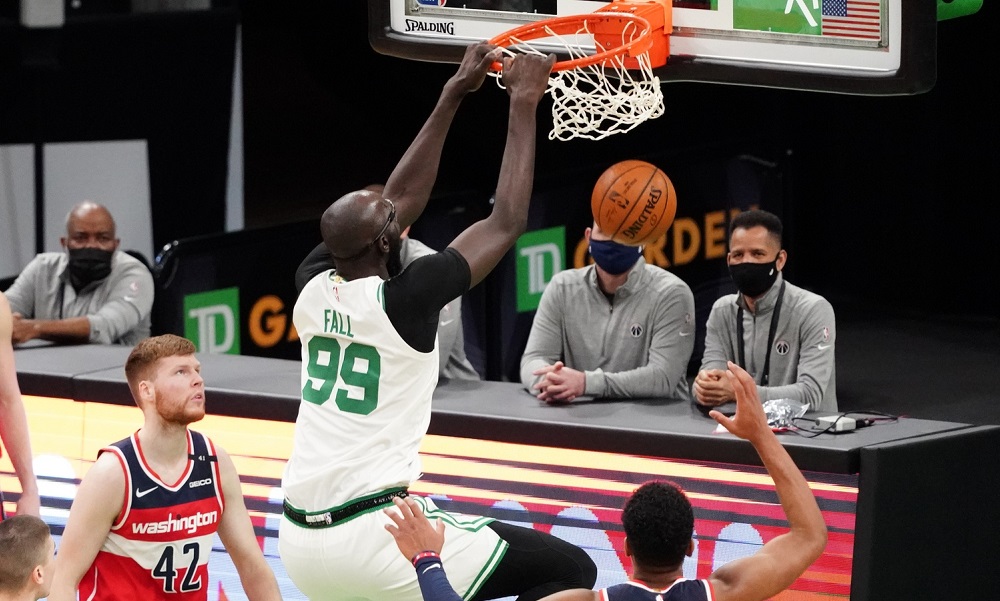 On Friday, the Celtics temporarily lost three big men to pandemic safety, then learned they’d be gaining back Kemba Walker sooner than later. But the immediate concern was who would help fill the frontcourt gap that evening against the Washington Wizards?

If there had been fans Friday night at TD Garden, they would have been brought to their feet and into a frenzy several times as Fall was more than just a late-game sideshow. Because the Celtics were missing three big men because of COVID-19 protocols, Fall was elevated from bench cheerleader to backup center.

He played meaningful, quality minutes in the Celtics’ 116-107 win over the Washington Wizards, showing the Celtics faithful his behind-the-scenes work is paying off. He finished with 4 points, 8 rebounds, 3 blocked shots and a handful of changed or altered shots in his 19 minutes.

No one was happier to see Fall succeed than Celtics head coach Brad Stevens.

“I thought he was great tonight. I thought he in a lot of ways changed the game there when he came in in the first quarter it was back and forth,” Stevens said after the game. “One of the things we were missing without those guys here is some physicality and some rim protection. He provided both of those things in a big way, so I thought he was terrific.”

“We just singled him out in the locker room. I couldn’t be happier for the guy. He goes from undrafted to two-way to still on a two-way but like last year in the bubble, didn’t dress half the time … All he does is smile. He’s a great teammate, as good as I’ve been around, and he works. He is just a — he’s a good one, for sure. And I’m really happy for him.”

That was fun. Tacko is normally the Celtics’ human victory cigar, so we say good for him that he got a chance to play minutes that mattered. Even better, he performed at a high level (yeah, it’s a pun) on both ends of the court. Very rewarding to see him reap the benefits of his hard work.

One thing that was noticeable last night: Tacko moved around the court better than ever. His movements have usually been slow and stiff, his gait a bit awkward. This game, he looked much more fluid, and faster when he ran back on defense. He must be going through agility drills regularly, and they’re paying off.

Tacko Fall: "Every day I can see myself improving. And I’m in the right hands. I just got to keep working."

One caveat: the Wizards don’t have anyone special at the center position. That was helpful to Tacko, giving him favorable matchups during this breaking-in game. Next on the schedule, though, are the Heat (Bam Adebayo, All-Star), Bulls (Wendell Carter, Jr., 23 points vs. Lakers on Friday) and Magic (Nikola Vucevic, All-Star). Will be interesting to see if Tacko can pass those tests.

On Page 2: The rookie does it again

Even in a gym filled with NBA players, the flurry seized everyone’s attention. Payton Pritchard showed off a pull-up jumper. He broke out his finishing package. He drilled a 3-pointer from well beyond the arc. As he took over the five-on-five scrimmage, the other players on his team angled to feed him on every possession. The buzz about Pritchard built up.

Olin Simplis, a trainer who has worked with a long list of NBA players, had already been convinced Pritchard could excel in the NBA. But that day during the pre-draft process last year, Simplis said, the 6-foot-1 guard made full believers out of everybody else. Norman Powell, the Raptors guard, shook his head at the display.

“Yo,” Powell said, according to Simplis’ recollection. “This kid is really good.”

Tacko’s contributions were vital, and so were the 59 combined points by Jaylen and Jayson, but the key basket of the Celtics win was scored by rookie Payton Pritchard. The kid just has a knack for being in the right place at the right time, and he’s been shooting lights out.

Here’s what led up to that crucial hoop: After dominating the first 24 minutes (19-point halftime lead) and boosting their lead as high as 28 in the third quarter, the Celtics took their foot off the gas. The Wizards cut the lead to 15 going to the fourth, then closed it to 99-95 with 7:36 remaining.

The score remained there until Pritchard, with the shot clock running down, did this:

That bucket broke the Wizards’ spell, and momentum swung back to Boston. Two Smart free throws and a Tacko putback dunk restored the lead to 11, and the Celts weren’t threatened again.

The Celtics are now 7-3, and the Oregon kid has certainly played a major role. He’s a crunch-time regular who delivers, as we saw with his game-winner in Miami. He’s shooting amazing percentages: 51.6/42.3/90.0 (and was 3 of 3 from the arc vs. the Wizards). He came here as a four-year collegian, but he’s poised enough to already look like a four-year pro.

In November, these words appeared in this space:

All of that assumes the NBA can pull off the season without too much COVID-19 disruption. I’ve seen little discussion of that factor. It’s possible that, because the Disney World bubble was a smashing success, we’re taking it for granted.

This new season, however, will be out in the real world, where COVID has staged a dangerous fourth-quarter comeback. Case numbers are rising almost daily, and it’s almost impossible to imagine the NBA won’t be affected.

As an example, look at the NFL, which has attempted to run its normal season, except without fans, or in some cities with small numbers of fans spread out in large stadiums. The league has generally kept to its schedule, but there have been several games rescheduled because of clusters of positive tests. A few teams have had to close down their training facilities and suspend practices for days at a time. Numerous players have also been forced to miss games, including the reigning MVP (Lamar Jackson) this week.

NFL teams do have four times as many personnel as NBA squads, but they play just once a week. It seems inevitable that NBA teams with three or four games each week will be affected just as much.

And today, January 9, the Celtics, Sixers, Mavs, Nuggets and Nets are all currently dealing with players being sidelined for issues related to COVID-19. Philly’s situation seems NFL-ish.

The plan remains for the Sixers to bus back to Philadelphia tonight ahead of Saturday's game vs. Denver, but team still is waiting in a Manhattan hotel. https://t.co/GqyMF1Eh4H

You didn’t need a crystal ball to see this coming.

For now, the season goes on, and with so much money at stake, it will likely take a drastic development to change that. All we can do is hope no one becomes seriously ill. Beyond that, it’s scary to think the NBA championship could be determined by the bad luck of a superstar testing positive at the wrong time.