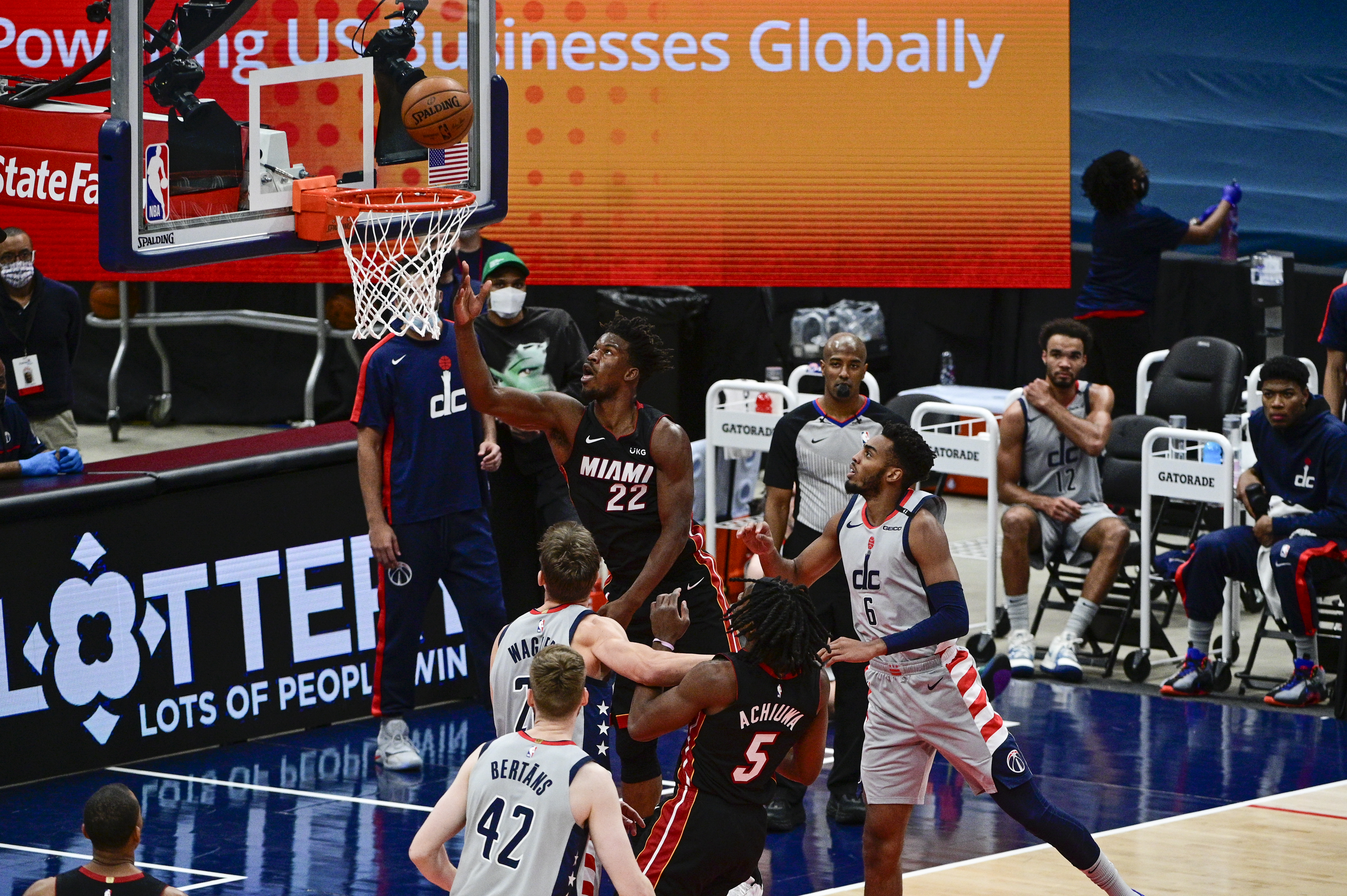 The final score, 128-124, is a little deceiving of how close things were, but the shorthanded Washington Wizards gave the Miami Heat a fight on the second night of a back-to-back with effort. Here are five takeaways as well as Scott Brooks, Garrison Mathews, Robin Lopez, and Rui Hachimura’s post-game media availability.

Early Saturday afternoon, Shams reported that Jayson Tatum would be forced to enter a 10 to 14-day quarantine per the NBA’s protocols to try and minimize the spread of COVID-19. This probably means that Tatum was deemed a close contact with someone who recently tested positive for the virus. With very good friends Bradley Beal and Tatum embracing close to each other before, during, and after Friday night’s game in Boston, Beal was a late scratch as a result of contact tracing just an hour before tipoff against Miami. It boggles me that the NBA does not consider in-game play between opposing players as close contacts because they may not accumulate 15 minutes of 6-feet vicinity, but clearly Beal was in close contact with Tatum. Scott Brooks had no information on how long Beal would be mandated to be away from the team as the Wizards are at the mercy of the NBA’s verdict. At 2-8, Washington can ill-afford life without their best player.

As if things could not get worse for the Wizards, two minutes into the game they lost their starting center to a left knee injury. Jumping for a loose rebound, Bryant came down awkwardly turning his left ankle and buckling his left leg. He would fall to the floor and immediately grab at his left knee. He was assisted off the hardwood putting very little weight on his left leg, but was able to walk a little bit with minimal assistance on his way to the locker room. The center will get an MRI on Sunday morning to determine the extent of any structural damage. Wishing the 23-year old nothing but the best possible outcome as he has had a nice start to his fourth NBA season.

Garrison Mathews heats up against Heat

In a similar situation last season against the Miami heat without Bradley Beal or Thomas Bryant, Mathews popped off with his career-high 28 points on 6-for-9 shooting including 4-for-7 from 3 and an impressive 12-for-13 from the free-throw line. With minutes to be had again tonight, Mathews build off of his performance the night before against Boston. The Wizards’ two-way player finished with 22 points on 6-for-12 shooting in 23 minutes off the bench. Mathews attributed his success against Miami to their pack the paint defensive mentality giving him space on the perimeter where he again knocked down 4 of 7 shots from deep. Given the second unit’s inability to score and settle for Russell Westbrook’s mid-range jump shots this season, Mathews could be a welcome boost moving forward as many have called for earlier. Not only a shooter, Mathews has been lauded by teammates and coaches for his tenacity and toughness on the defensive end.

The 2020 NBA rookie class faced the hardest upfront learning curve of any other class in recent memory given the abbreviated offseason that lacked minicamp, Summer League, or even just more than a few weeks between being drafted and playing in regular-season games. Now with NBA teams having some film on Avdija, it made sense that his game may take a step back. Over the previous three games, the rookie had just four points in 46 minutes leading to Scott Brooks look elsewhere on his roster. In a game without your top three scorers with Russell Westbrook also sidelined with left quad soreness that supposedly he has been playing through in recent games, Avdija had plenty of opportunities and made the most of it. In 32 minutes, Avdija put up career-highs in points (20), field goals (7), three-pointers (5), and assists (5). The 20-year old certainly has earned the right to start, but his performance against Miami certainly begs the question of whether he is most efficiently utilized when standing in the corner as Westbrook and Beal dominate the ball.

Entering Saturday’s game, Bertans was shooting just 34.2 percent from beyond the arc through nine games, well below his 41.1 percent clip over his first four NBA seasons. That percentage only went down 1-for-7 from the field, missing all four of his three-point attempts. The sharpshooter’s lack of conditioning has drawn the ire of many and at this point in the season it cannot be an excuse anymore with it being a liability to the team. Clearly unhappy with his play, Bertans returned to the court after the game to put up shots with player development guru David Adkins. Washington desperately hopes their $80 million investment returns to form ASAP.

Little postgame work for Bertans. He was 1-7 from the field, 0-4 from three tonight. pic.twitter.com/1c2FEdlTVa