The Penguins have played just 29 games in the past 365 days. Players such as Alex Galchenyuk, Patrick Marleau, Dominik Kahun, Conor Sheary, Patric Hornqvist, Justin Schultz, Jack Johnson and Matt Murray laced ’em up for the Penguins at some point during that time. All of them are employed by another team to start the 2020-21 season.

A franchise that, perhaps, has become more familiar with turnover than any other, the Penguins yet-again will have a very different look up and down their lineup this season.

Penguins’ general manager Jim Rutherford ultimately achieved his goal of becoming a younger and faster team, regardless of any argument that he didn’t take the best possible route to do so.

With five new skaters in the mix, let’s take some time to learn more about them. 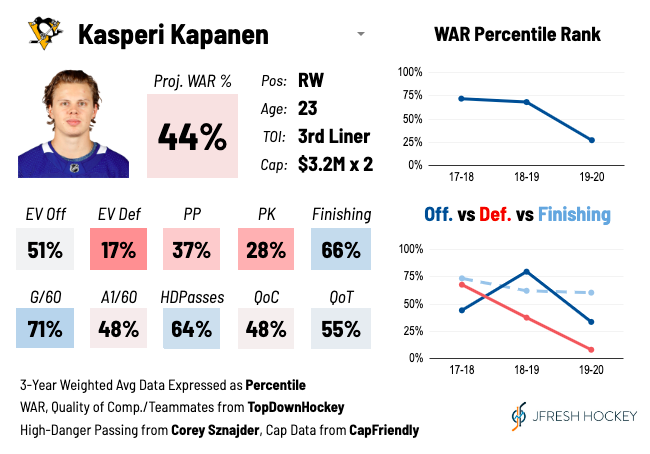 Acquired shortly after the Penguins sputtered out of their four-game qualifying round series against the Montreal Canadiens, Kasperi Kapanen is a speedy, above-average goal-scorer that has some serious problems defensively. After acquiring him, the Penguins lauded his penalty-killing ability, but his results are toward the league’s basement.

The Penguins traded the 15th overall pick in the 2020 draft, David Warsofsky, Filip Hallander and Evan Rodrigues (later re-signed with the Penguins) to get Kapanen, as well as Pontus Aberg and Jesper Lindgren.

After a strong 2018-19 season in which he spent a large chunk of time with Maple Leafs’ star Auston Matthews, Kapanen was a replacement-level player the following season, posting a 47.7 expected goals percentage and -0.1 WAR, per Evolving-Hockey. The Leafs were outscored by half a goal every hour he spent on the ice.

Kapanen notoriously infuriated Leafs fans for his tendency to storm into the zone off the rush only to pull up at the top of the circles and do nothing with the puck.

I suspect Kapanen isn’t as bad as he was last season, but I don’t believe he’s as good as he was two seasons ago. Then again, the Penguins plan to play him with Sidney Crosby and Jake Guentzel, a duo that has the capability to turn dirt into diamonds.

Due to visa issues, Kapanen did not arrive in Pittsburgh until this past Saturday and has yet to practice with the club because of a mandatory quarantine. He figures to miss several games. 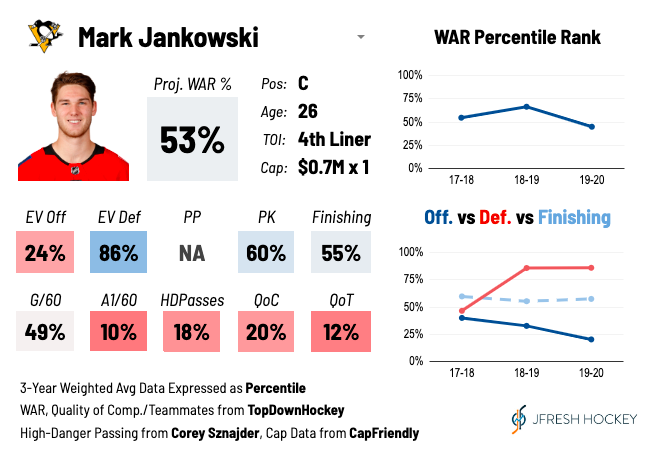 Mark Jankowski, signed to a one-year, $700K deal to be the Penguins’ third-line center, is an exceptional defensive player with average goal-scoring abilities. His playmaking and offensive generation are not strong-suits.

Standing at 6′ 4″ and weighing in at 212 pounds, Jankowski isn’t a burner by any means, but skating does not appear to be a weakness from what I’ve seen of him.

He scored 31 goals from the start of the 2017-18 season until the end of the 2018-19 season. He scored just five goals in 2019-20 despite maintaining his finishing impact from the previous two seasons. If he was equally efficient, why did so few pucks hit the back of the net for him?

He shot the puck at a fraction of the rate he did the two years prior. 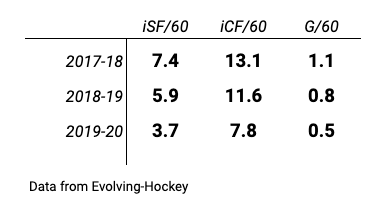 Tasked with centering Jared McCann and eventually Rodrigues, the Penguins should encourage Jankowski to shoot the puck much more frequently if they have hopes of his goal total reaching double-digits. 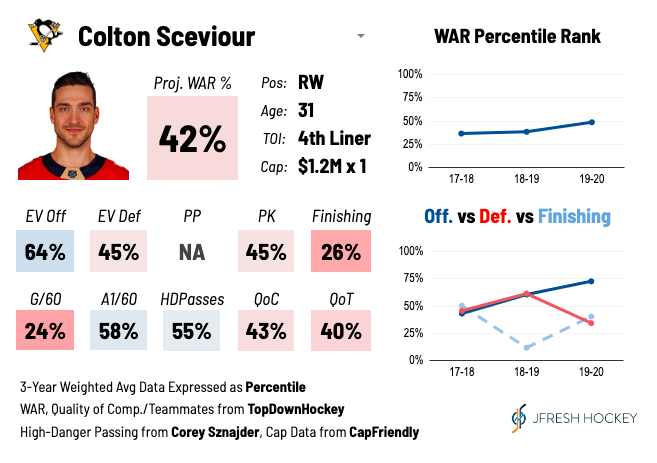 His primary assist rates are solid and according to Corey Sznajder’s tracking, he makes an average amount of high danger passes, presumably the reason behind his pleasantly surprising offensive play-driving.

Don’t get me wrong, Sceviour is not a guy I would expect to offer much of an offensive spark. At 31-years old, if his already shaky defensive play slips further, his offensive value would be mitigated.

With one-year remaining at a $1.2M cap-hit, don’t expect Sceviour to be back with the Penguins at the start of next season. It wouldn’t surprise me to see him traded if the Penguins are relatively healthy down the stretch.

On Monday he practiced on the fourth-line with Teddy Blueger at center and Sam Lafferty on the left side. He appears to have secured a lineup spot for now, at least until Kapanen or Zach Aston-Reese return. 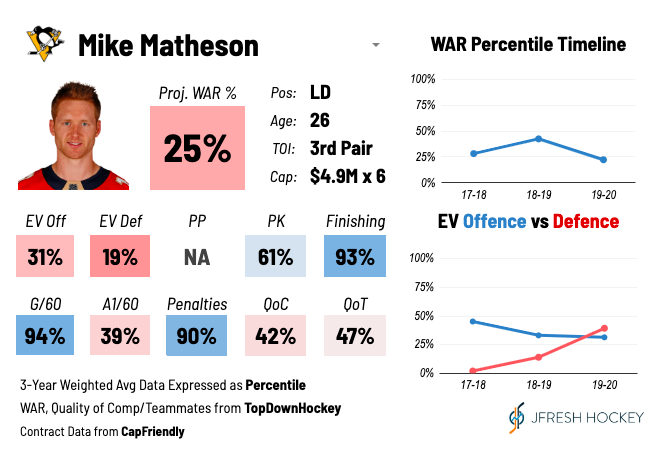 Mike Matheson, acquired with Sceviour in the Hornqvist trade, is an elite blue line goal-scorer with tremendous skating talent. A turnover machine, his overall play-driving abilities are extremely suspect.

With six-years remaining at a $4.9M cap-hit, Matheson’s contract has the potential to be one of the league’s worst. That’s not exactly the kind of contract you willingly take on when the player has finished in the league’s bottom half in WAR in each of the past three seasons. In fact, Matheson has never had a season in which his team scored more than 50% of the goals or took more than 50% of the shots with him on the ice.

It isn’t all doom and gloom with Matheson, though. His individual skating and puck skills are well-known. One would think his skills are better suited for a team like the Penguins rather than the Panthers.

Penguins’ head coach Mike Sullivan has mentioned on numerous occasions that the coaching staff will do their best to put Matheson in a position where his skills can flourish.

After jumping into the play in the offensive zone and scoring a nifty goal in the Penguins’ intra-squad scrimmage over the weekend, Matheson found himself practicing on the second-pairing with defensive stalwart John Marino.

If Matheson shores up the rate at which he turns the puck over, I think pairing him with Marino has the possibility to be extremely effective, especially if their most common forwards are the Malkin line.

Here’s a look at Matheson going coast-to-coast for a brilliant goal against the Boston Bruins. 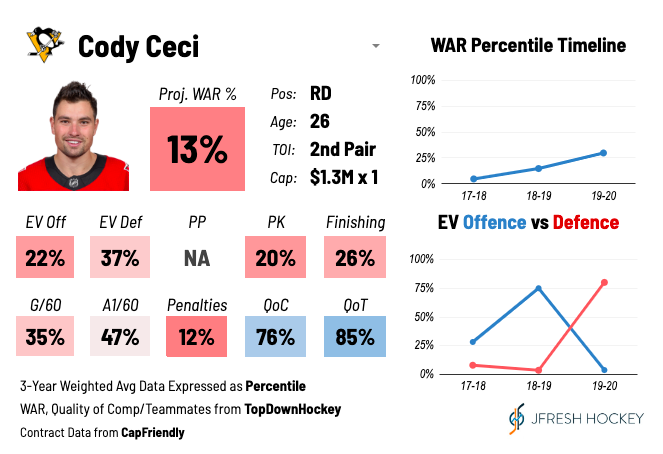 Cody Ceci, signed to a one-year $1.3M contract, has been one of the league’s worst defensemen over the past three seasons. Despite a pretty solid defensive impact last season, Ceci hurt his team on offense more than almost any other NHL blue liner, save for say, Jack Johnson.

Ceci is not as bad as Johnson, but the Penguins will be susceptible to some of the brain farts and head-shaking moments that came along with him.

A former first-round pick in the 2012 draft, Ceci still carries a pedigree that he’s a strong skater and has some offensive upside. I think that’s a load of crap. After just two days of camp, The Athletic’s Josh Yohe wrote that if Ceci were to start the season as one of the top-six defensemen, he’d be the weakest skater of the group.

The video scouting I did on Ceci isn’t very promising, either. While he might pleasantly surprise you with an unconventional yet effective defensive play, he is going to madden you when the puck is on his stick. The man has absolute hands of stone. His breakout passes were often wobbly and off the mark. He doesn’t shoot the puck relatively well.

In the following clip, not only does Ceci leave his side of the ice, but he inexplicably jumps right in front of his d-partner, Morgan Rielly, causing him to turn the puck over in the neutral zone.

The Penguins are going to have some serious problems if teams load up on Ceci’s defensive partner, currently Marcus Pettersson, forcing Ceci to handle breakout duties.

The signing is a bit of a head-scratcher, especially when you consider Chad Ruhwedel, Juuso Riikola and Pierre-Olivier Joseph are all viable options that don’t figure to hurt on-ice results as much as Ceci has a history of doing.

If there’s a bright light from anything, it’s that the Penguins figure to play Ceci in a much smaller role than he’s ever had before. Ceci has been asked to play first or second-pairing minutes every season of his career and simply hasn’t been able to handle them. There’s reason to be optimistic his results could improve in the reduced role.