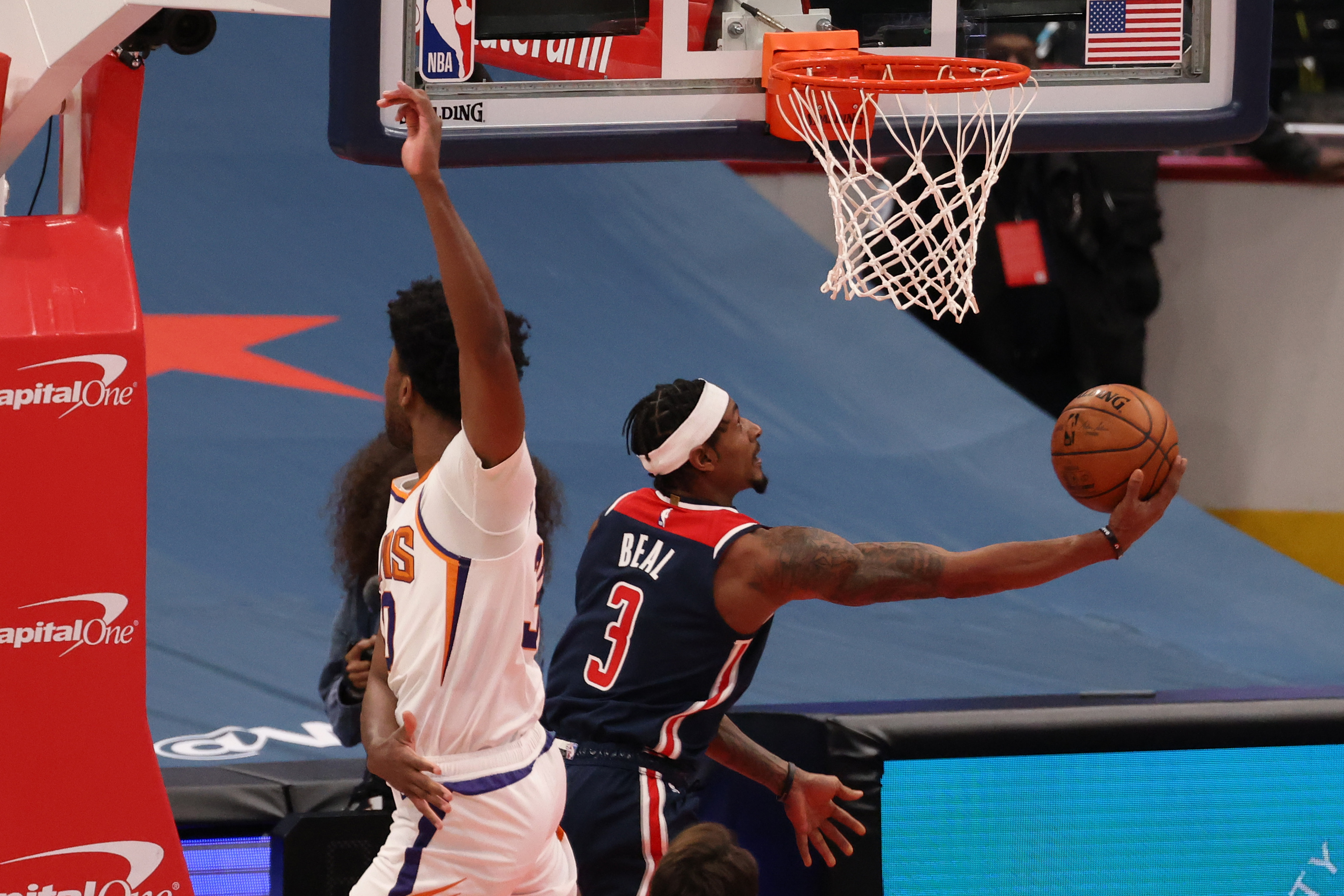 The Washington Wizards have had the Phoenix Suns’ number the last few seasons and it continued on Monday night with the home team earning a much-needed victory against one of the hotter teams to start the NBA season. By the end of the first quarter where the Wizards held the Suns to just 15 points on 29 percent shooting from the field, Washington had built up a double-digit advantage that they would maintain for the rest of the game. Here are five takeaways from the Wizards’ first home win as well as Scott Brooks, Robin Lopez, Bradley Beal, and Davis Bertans’ post-game media availability.

Hours before tipoff, the team announced that Westbrook is expected to miss the next week of play with a left quadriceps injury and will be re-evaluated at the end of the week. That will keep the former MVP out for at least Washington’s next two games against Utah and Detroit as well as potentially the home back-to-back against Cleveland. Scott Brooks shared pre-game that Westbrook first sustained the injury in training camp and was playing through it to start the season before getting his in the muscle again last week in Philadelphia. Erring on the side of caution, the Wizards are shutting the point guard down for the time being. It is plausible that the ailment is why we have seen less of Westbrook attacking the rim and more getting blown by on defense. Washington knows if they have any shot turning this around they will need stellar play from Westbrook.

The entire organization and fan base was saddened by Bryant’s season-ending partially torn left ACL because the 23-year old center brought so much joy to the floor. At least in the short-term, Bryant will be replaced by tag teamwork from Robin Lopez and Moe Wagner with potentially a sprinkle of Rui Hachimura in small-ball lineups. Lopez took advantage of poor interior defense by Phoenix with 11 points on 5-for-6 shooting and 11 rebounds including seven on the offensive end. Moe Wagner provided a good dose of energy off the bench and efficiently had nine points and six rebounds. A combined 20 points and 17 rebounds in 48 minutes of play is just about what Washington can ask for as they continue the season without their budding center.

Regardless of how the Wizards are record-wise, it would be a crime for Beal to not be named to both an All-Star and All-NBA team this season. He is scoring at will against defenses that are constantly keying in on him. With an NBA-leading 6th 30 point performance, Beal maintains his early scoring lead with a complete performance in 35 minutes recording 34 points, nine assists, eight-rebound, and two steals. The Wizards are going to be without Bryant long-term and Westbrook hopefully only short-term, but any game that Beal is on the court they are going to have a chance because he is playing at an MVP level early this season, which Suns head coach Monty Williams attributed to another diligent offseason leading up to now.

Davis Bertans has returned to form

Between not wanting to risk an injury as a free-agent and COVID-19, Davis Bertans did not play 5-on-5 basketball for over nine months. That was delayed further by a visa issue that cost him the majority of training camp with the team. With already little practice time, it has taken Bertans several games to knock off the rust and fatigue. The Wizards hope Monday’s showing against the Suns, 18 points in 24 minutes carries over into the next game and the rest of the season. In a four minute span in the second quarter, Bertans exploded for five straight 3-pointers. Washington’s lead exploded from 14 to 32 in the blink of an eye.

“Overall conditioning is up there to a standard of where I should be during the season. I felt good, I think I could play more minutes and still feel good. The other part is just repetition being out there on the court.”

Troy Brown Jr. at the bottom of the wing totem pole

With the emergence and now rewarded playing time for Garrison Mathews, it appears Troy Brown Jr. is currently sitting at the end of Scott Brooks’ wing rotation. Recording his fourth DNP – coach’s decision in five games with the lone playing time coming on Saturday when Bradley Beal was forced to temporary quarantine due to contact tracing with Jayson Tatum, Brown is forced to wait his turn. As Brooks has always preached he has to stay ready especially given uncertain times, but as of now the team’s 2018 first-round pick is out of the rotation. Jerome Robinson was even given the start for Beal over Brown as Isaac Bonga continues to be the preferred defender of choice in the group. The 21-year old certainly has the talent and if the Wizards were to make a short-term move possibly to get center help, he is an asset that other teams value that Washington would be more willing to part with than others.