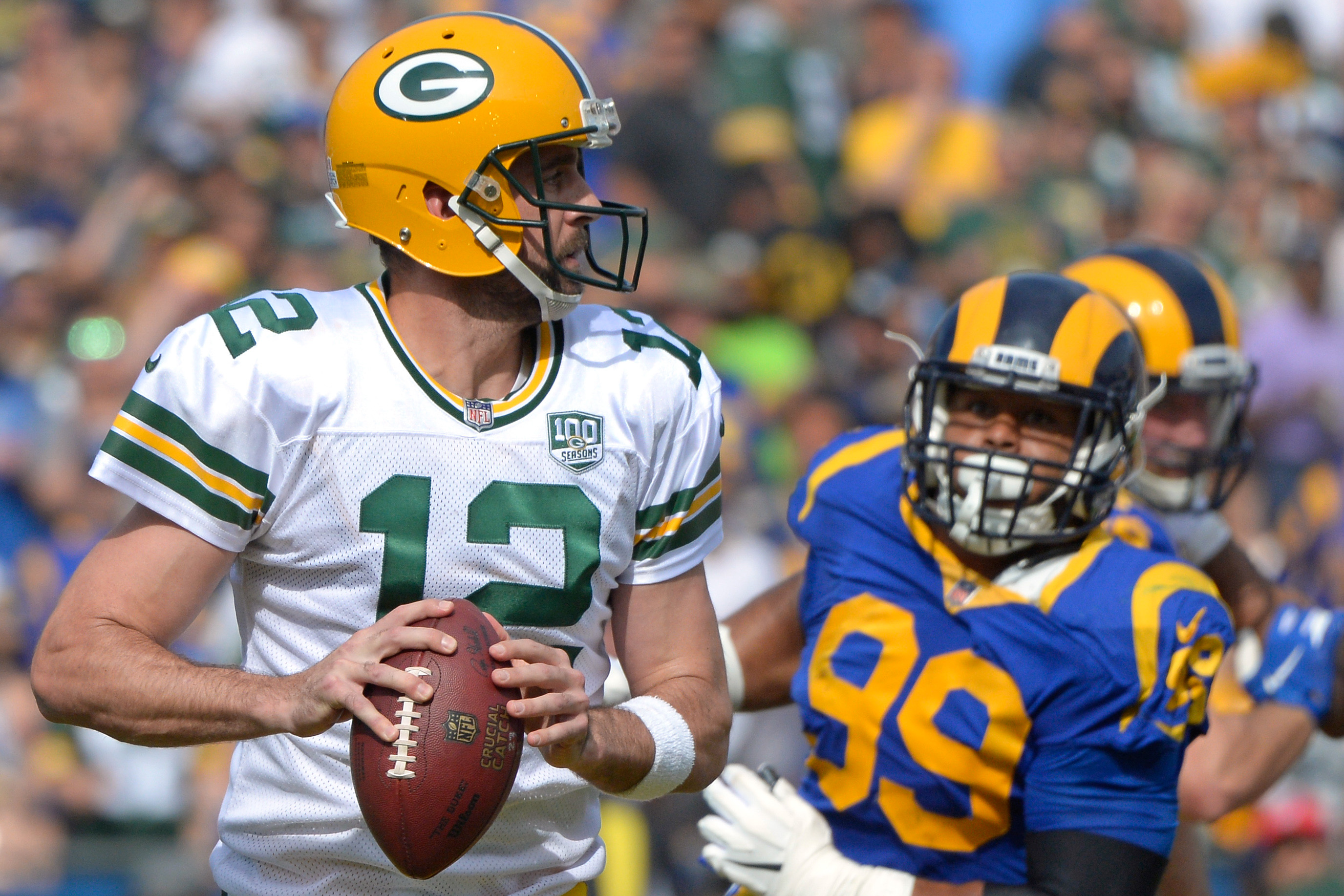 The Green Bay Packers open their postseason on Saturday when they host the Los Angeles Rams in the NFC Divisional Playoffs. The Packers finished the season as the top seed in the NFC with an 13-3-0 record and have the league’s top scoring offense. Green Bay had a bye last week. The Rams were 10-6-0 in the regular season and are fresh off a 30-20 upset win over the Seahawks in Seattle in the Wild Card round of the playoffs.

The Rams lead the all-time regular season series between these two teams 46-45-2. These two teams first met in 1937 when the Rams played in Cleveland. The Packers and Rams have met twice in the playoffs and split the two meetings. The Packers defeated the Rams 28-7 in Milwaukee in 1967 with running back Travis Williams scoring two touchdowns. In 2001, the Rams intercepted Brett Favre six times in a 45-17 win over the Packers in St. Louis.

If the Packers win on Saturday, they will host the winner of the game between the New Orleans Saints and the Tampa Bay Buccaneers in the NFC Championship Game at Lambeau Field.

Aaron Donald is the best interior defensive lineman in the game today. He is outstanding against the run and gets a lot of pressure on opposing passers as well. He has made the Pro Bowl in each of his seven NFL seasons.

Donald has a unique combination of size, speed, quickness and savvy that make him extremely difficult to defend. He had two sacks the last time these two teams met during the 2018 regular season.

The Packers offensive line will have its hands full trying to contain Donald who had 13.5 sacks, 27 quarterback hits and 14 tackles for loss. All Pro center Corey Linsley will probably be facing Donald most of the game with help from either Elgton Jenkins or Lucas Patrick. The double teaming and chip blocking could be used to slow Donald down.

The Packers signed Jared Veldheer to add depth, but Valdheer tested positive for Covid-19 on Wednesday and will not be available on Saturday. If injuries strike the Packers offensive linemen on Saturday, the team would be hard-pressed to protect Rodgers who was only sacked 20 times all season.

Donald is not the only quality pass rusher on the Rams roster. Tackles Wagner and Billy Turner will also have to slow down edge rusher Leonard Floyd who had 10.5 sacks from his outside linebacker position.

Rodgers has adjusted to Matt LaFleur’s offense and gets the ball away much quicker than he had in the past. If he has enough time to throw, the league’s MVP favorite can pick apart any defense. Keeping Rodgers safe from the pass rush is a huge key for the Packers on Saturday.

The Rams will focus on shutting down Davante Adams who is playing at an elite level this season and may just be the best wide receiver in the game. Rams cornerback Jalen Ramsey is also one of the best in the league today and the battle between the two players will be a fascinating game within a game.

Adams may also line up in the slot frequently in this game to get him away from Ramsey and to free him up in the middle of the field. Scheming Adams open or getting him the ball on quick hitting passes near the line of scrimmage are ways to get him touches despite the possibility of good coverage by Ramsey and the rest of the Rams talented secondary.

The Packers may also have Adams go in motion to help reveal the coverage the Rams defense is in and to create space for the former Fresno State star immediately off the snap of the ball. Because of his hard work and outstanding moves off the snap, Adams often gains an advantage within a step or two after the play begins.

The chemistry between Rodgers and Adams is outstanding and allows them to create plays with a nod, look or wink. They improvise well together and adjust on the go.

The Packers offense can move the football even if Adams doesn’t have a big game, but Adams is Rodgers’ favorite and most reliable receiver and his security blanket. If the Rams can’t slow down Adams, they will have trouble winning the football game.

One reason Los Angeles was able to upset the Seahawks in Seattle was the strength of their running game. Cam Akers carried the ball 28 times for 131 yards and a touchdown. Akers averaged 4.3-yards per carry over the course of the season while gaining 625 yards on the ground.

Akers is not tall but he has good size and a low center of gravity. He is an underrated runner who can carry the load for his offense and considering the weather and the Rams issues at quarterback, he may have to.

The Packers defense has improved against the run in the last six games. Nose tackle Kenny Clark has played his best football in December. The Packers also have gotten improved linebacker play since Krys Barnes and Kamal Martin have been stepping up their play. Even Christian Kirksey, who struggled for most of the season, has been playing better in recent weeks.

Defensive coordinator Mike Pettine usually emphasizes stopping the pass but showed he could adjust when facing teams that love to run the football like the Titans. Pettine played his base defense more frequently and it proved effective as the Packers slowed down Derrick Henry.

Look for the Packers defense to place a lot of importance on stopping the run game on Saturday because it is by far the strength of the Rams offense entering this game.

Jared Goff was the starter for most of the season and he is the more talented and experienced option. Just two years ago, Goff helped lead the Rams to the Super Bowl but his game has fallen off since then.

Goff suffered an injured thumb on his throwing hand in December that required surgery. He was forced back into action against Seattle last week when John Wolford suffered a stinger late in the first quarter of that game. Wolford has now been ruled out so Goff will get the call as the starter.

Goff is from California, played his college ball at Cal and has never played well in below freezing temperatures. The Packers must make Goff beat them with his arm on Saturday. Between his injured thumb, the cold and his inconsistent play throughout the season, this will be a tall order for Goff.

The Rams allowed 25 quarterback sacks this season and the line has done a good job of protecting Goff and Wolford. The Packers hope to pressure Goff with Za’Darius Smith, Preston Smith, Clark and Rashan Gary being the top pass rushers on the team.

Goff is not a big threat to scramble right now especially now because of his injured thumb. The defense doesn’t have to sack Goff but just getting him out of his rhythm will be important for the defense.

The Packers need to put the game on Goff’s shoulders and force him to be the difference maker for the Rams offense. That will be a tall order for Goff on Saturday.

The Rams have the NFL’s third-best rushing defense based on yards allowed per game. Donald, Michael Brockers and Sebastian Joseph-Day make up a solid front three while the linebackers led by Micah Kaiser, do a good job of stopping the run, especially up the middle.

In the cold, the Packers will have to rely on the run more than they usually do, especially if the wind is a major factor. Aaron Jones, Jamaal Williams and A.J. Dillon should all be available for action on Saturday.

The Packers don’t have to run more than they pass, but they do need to move the ball on the ground enough to keep the Rams defense honest and to set up the play action passing game.

It will be interesting to see how Matt LaFleur divides the carries up between his three backs. Jones is more of an outside threat and his speed and cutting ability make him dangerous.

Williams is more of a between the tackles runner who excels on slow, wet or sloppy fields and may be more effective in the cold of Lambeau in December.

Dillon may not have earned the trust of the coaches when it comes to pass blocking and route running which may keep him to a limited role. Still, the thought of the 247-pound Dillon crashing through the defense late in the game is an appealing one for many fans.

The Packers don’t need to gain 150 yards on the ground in this game, but they do need to run well enough to keep their offense balanced and the Rams defense from keying exclusively on rushing Rodgers.

The Packers are the better team on paper and should be the favorite in this game, but they can’t beat themselves. Turnovers or key mistakes on special teams could give the Rams a short field and an opportunity to pull off the upset. Essentially, the Packers cannot beat themselves against a quality opponent like the Rams.

On special teams, the Packers have allowed too many long kick and punt returns that have helped give opponents a short field. Fortunately, the Rams don’t have a highly-regarded return specialist. Still, Green Bay’s special teams cannot allow Nsimba Webster to break a big return and set up the Rams offense for an easy opportunity.

In addition, the Packers cannot allow a blocked punt or field goal to be a momentum changer in this game.

The Packers must play sound, fundamental football and not beat themselves. Otherwise, the underdog Rams could gain confidence and have a chance to win a close game.

The Packers are deservedly the favorites and they have the home field advantage which they worked so hard to get. The cold weather certainly won’t help the Rams and will give the Pack a slight psychological advantage.

The Packers have the league’s best offense, the Rams the best defense. In these types of matchups, the team with the better offense usually triumphs. With Goff compromised, it is tough to imagine the Rams scoring more than 24 points in this game. It won’t be easy for Los Angeles to hold Aaron Rodgers and the Packers offense to less than that total.

It won’t be easy, but the Packers are the better team and they will win this game if they don’t beat themselves.