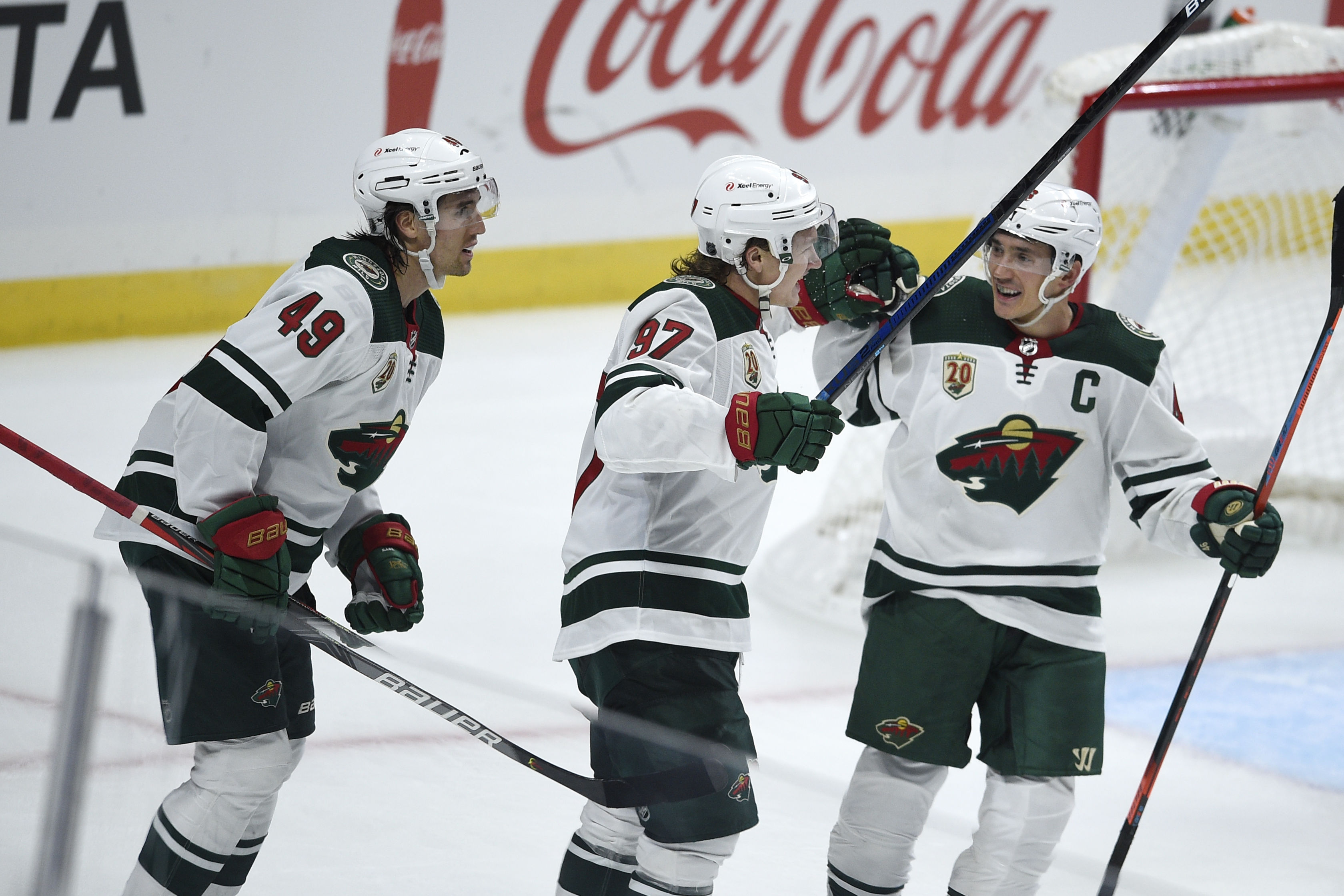 Nicknames are something I normally try to avoid using when discussing sports.  I think it stems from some nicknames some of my friends once gave me that maybe were not very flattering descriptions of myself and my parents telling me I needed to insist they call me by my name instead.  To my parents credit, I continue to correct others when I feel I’m be addressed inappropriately.  So hearing Minnesota Wild fans on Twitter or podcasts talk about Kirill Kaprizov as Kirill ‘the Thrill’ Kaprizov, Dolla Bill Kirill, or as some of his teammates call him simply ‘the Magic Man’ I find myself unable to really dislike any of them.  Why?  Because so far (knock on wood and I realize we have a small sample size to go from) its entirely accurate.  I am not a homer of a Wild fan, so officially I’m not going to pick any of them but I won’t roll my eyes the way I did when people came up with nicknames for other Wild players like Mikael Granlund or Marian Gaborik (although I will admit to using ‘glass groin’ a few times).

In two games, the Novokuznetsk, Russia-native already leads the team in points and has a game-winning goal in overtime and an assist that set up the game-winning goal in another overtime game in another 4-3 victory over the Kings on Saturday night.  Yet beyond his penchant for overtime magic, if you watched closely enough you could see a team that was doing all it could to give him the puck because they know that just about anytime its on his stick, something special could happen.  Beyond just his skill with the puck or his awareness away from it is how fast his mind processes what needs to be done.

Unlike many other players just joining the league there doesn’t appear to be any visible adjustment to the speed of the game both physically and mentally.  If anything, Kaprizov manifests that rare ability to slow the game down and anticipate what must be done before he actually does it.  On last night’s game winning goal as he made a move to the middle of the ice (something Michael Russo pointed out on his most recent Worst Seats in the House podcast) he drew the full attention of the Los Angeles Kings defense before dishing it off to Marcus Johansson who fanned on a one-timer that eluded Jonathan Quick.  I must admit, seeing Kaprizov dish the puck I immediately said ‘noooo’ before Johansson made that decision look brilliant.  Whether its luck or whatever, the 23-year old Russian just seems to make great things happen often.

Yes, its against the Kings, a team not expected to be one of the better clubs in the Honda West division but still he’s giving a fanbase plenty to be excited and hopeful over, perhaps more than any other player in the team’s history.  I’ve been a Wild fan from Day 1, and we’ve been sold (by the organization) on a lot of players over the years as the team’s future, etc.  Yet as the team tries to celebrate its 20th season, and with all due respect to players like Gaborik, Granlund, and any other player that came before him he is giving a fanbase who have long been waiting for a superstar to emerge that we might just have one on the roster.

I have little doubt Kaprizov jerseys, whether the normal home and away or the immensely popular retro reverse jerseys are probably getting #97 Kaprizov placed on them as the fanbase is caught up in this fervor.  A friend of mine, Justin Bakke the person profiled by the Athletic‘s Michael Russo for his devotion to the long-awaited Wild prospect and member of the Sound the Foghorn podcast said he’s on ‘Cloud 97’ right now after I joked with him about it in a conversation after that game.  Its just another thing Kirill Kaprizov is good at, earning nicknames! 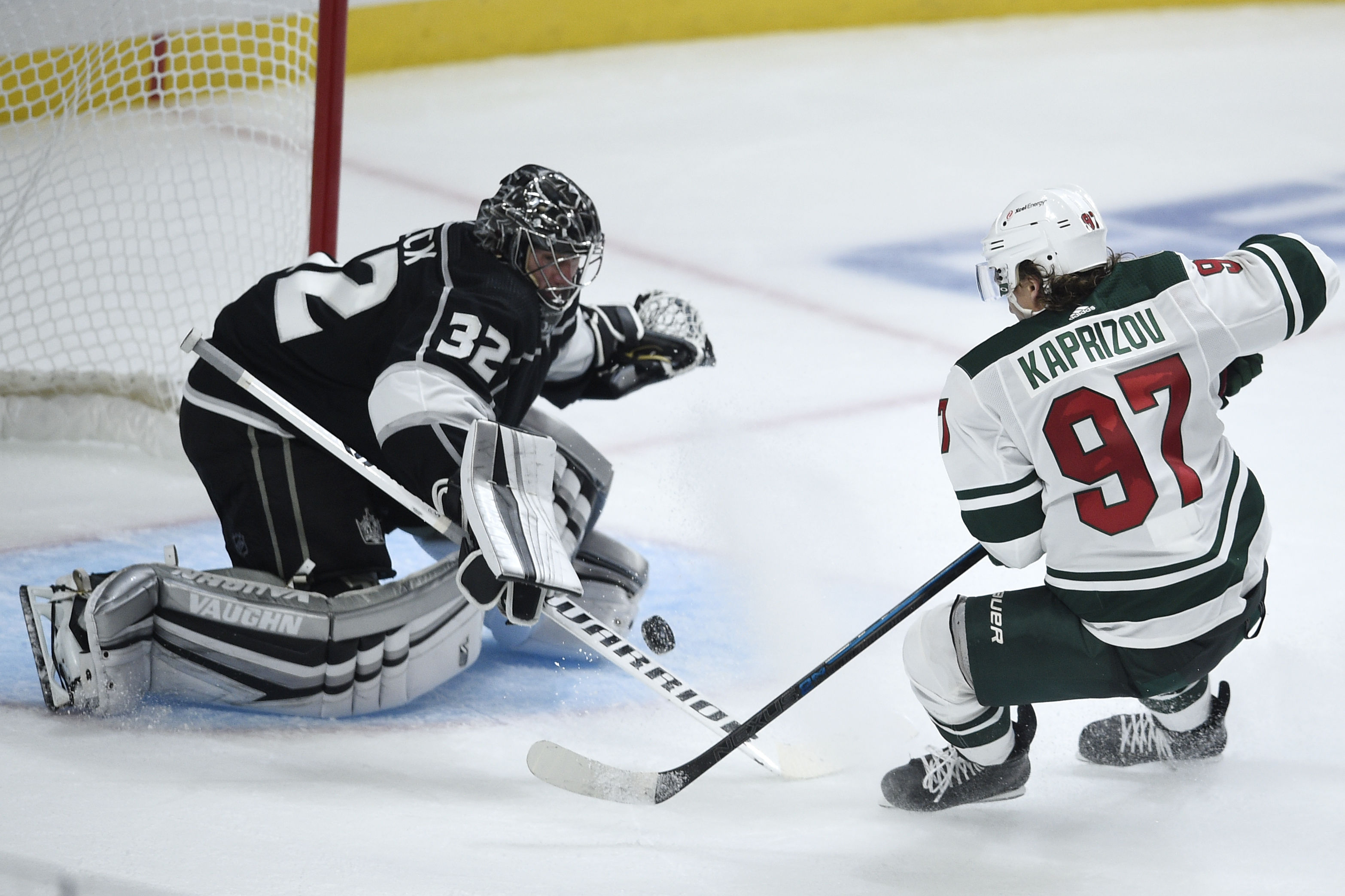 After a very rough first game, newcomer Marcus Johansson looked considerably better on Saturday night than he did in his debut on Thursday.  On Thursday, Johansson seemed like a lost puppy, unsure where to be and was caught flat footed our out of position frequently.  He seemed to have trouble staying on his skates and was kind of a liability on his line along side Nick Bonino and Kevin Fiala.

On Saturday, Johansson was more engaged and was far more involved, especially in the offensive zone.  He was showing initiative to shoot the puck and crash the net.  He just appeared to be more focused and the team needs to him to be a contributor offensively when you consider what they gave up for him in the Eric Staal trade.  Whether its fair or not, he’s got to help make up for the lost potential offense from Staal, a veteran player who consistently put up at least 20 goals a season for the Wild.  Either way, the fact he had a better game helps calm the nerves a bit after an ugly debut.

Revolving Door of Centers will have to do for now

The one lineup change from the team’s first game was to have Victor Rask swap spots in the lineup with Blaine’s Nick Bjugstad at the #1 center position.  I thought Rask did a reasonable job distributing the puck to his linemates Kaprizov and Zach Parise, but winning draws must improve.  So far through two games, Rask is 4 for 11 (26.7%) which is terrible.  Yet if you look around the only Wild player that is winning draws at more than 50% is Nick Bonino.  Also with two games in, Bonino is winning 58.5% of his draws (17-for-24).

Still, when Rask has the puck he seems to make good decisions and doesn’t mind getting his nose dirty in battles along the boards.  I think Rask’s game is better suited to a more skilled line and I think he has more scoring ability than he’s generally given credit for.  That being said, I feel I could say the same for Bonino who I think overall has the ability to be successful while being used in the top 6 or bottom 6.  So it will be interesting to see if Rask can continue to hold his job if his faceoff prowess continues to struggle as much as it has.  However in the other parts of the game I think its been ‘ok’.

Besides, with Marco Rossi out with an upper body injury I don’t really see any viable help coming anytime soon.  Because of the Wild’s struggles, will they give Rossi a chance whenever he’s over with whatever medical issue he’s dealing with?  Maybe, but I think he would have to show he’s ready for that opportunity at practice first before the team just inserts him into the lineup and just hopes it works out.  So even if the team wants to give him an audition I don’t think its going to happen anytime soon, even once he’s deemed ‘good to go’ health-wise.

If there was one move the Minnesota Wild made this season to improve a much-needed area of its game it was between the pipes with the free agent acquisition of Cam Talbot.  Talbot was supposed to help stabilize the team’s play between the pipes and be the kind of minor upgrade that would help result in more victories in tight games.  While one can argue he made enough saves to earn the two wins against the Kings, his play, most notably his rebound control was rather suspect through both games.

Talbot did note to reporters that he felt it was tougher to track the puck at Los Angeles’ Staples Center with its use of dark tarps covering the seats at the arena.  That could be a reason he’s giving up more rebounds because he’s not seeing pucks until they’re almost upon him.  I think a lot of goaltenders are probably struggling not having more color in the arena with many (if any) fans in attendance.  Yet, Talbot also noted he can hear pucks deflect off bodies and sticks in ways you would never be able to hear if fans were present at the game.

If you look at his basic numbers, through two games his current 2.85 goals against average and .910 save percentage are both totals that are eerily similar to the ones Devan Dubnyk and Alex Stalock put up last season.  Hopefully as he plays more games he tightens up because its hard to think he’ll earn too many victories giving up 3 goals per game.

3rd Line Continues to be strong

The last point I am going to make about the team’s opening weekend was the play of its 3rd line of Joel Eriksson Ek, Marcus Foligno and Jordan Greenway.  This was the one line that had previous experience being together last season coming into this one and that chemistry certainly has been evident.  The line has played a heavy game and has been a major pain to play against.

Their play down near the goal has been perhaps the most impressive where Foligno and Greenway have been especially adept at using their big-frames to protect the puck and then will for themselves a scoring chance with their strength.  Eriksson Ek’s rebound goal helped spark a Wild rally that eventually resulted another overtime victory.  With Foligno’s goal on Thursday, the line keeps working its way onto the scoresheet and that’s important for a club that is always in search of secondary scoring.

That’s a rap for me, what did you think of the opening series between the Minnesota Wild and the Los Angeles Kings?  Who impressed you and who concerned you?  Tell us on Twitter @CreaseAndAssist or in the comment section below!

Enjoy a little bit of prospect news too!

C – Sam Hentges (St. Cloud State, NCHC) ~ the former Totino-Grace star had a goal and an assist in rough 6-2 loss to Western Michigan on Friday.  Hentges has 5 goals, 10 points, 10 PIM’s and is an ‘even’ rating through 14 games.

LW – Vladislav Firstov (UConn, H-East) ~ after a World Juniors performance where he never seemed to hit his stride, the former 2nd rounder is trying to make up for it with a dominating return at the college level.  He had 2 goals, 2 assists in UConn’s 6-5 OT thriller against New Hampshire on Friday night.  Firstov has 2 goals, 5 points, and is a +2 in 3 games this season.

D – Filip Johansson (Frolunda, SHL) ~ It wasn’t that long ago that the young prospect would cause Wild fans to them grumbling under their breath, but now he’s making a strong case for the organization to take notice as he has thrived since from going to Frolunda after being with Leksand.  In his most recent game against Farjestads he scored two goals as they rolled to a 2-1 win.  Johansson has 5 goals, 10 points, 6 PIM’s and is a +4 in 28 games.

C – Jack McBain (Boston College, H-East) ~ the big-bodied centerman has kind of flown under the radar with so many fans focusing their attention to teammate Matt Boldy.  The Toronto-native had an assist in Boston College’s 2-1 win over Merrimack on Saturday night.  McBain has 2 goals, 7 points, 8 PIM’s and is a +8 in 9 games.