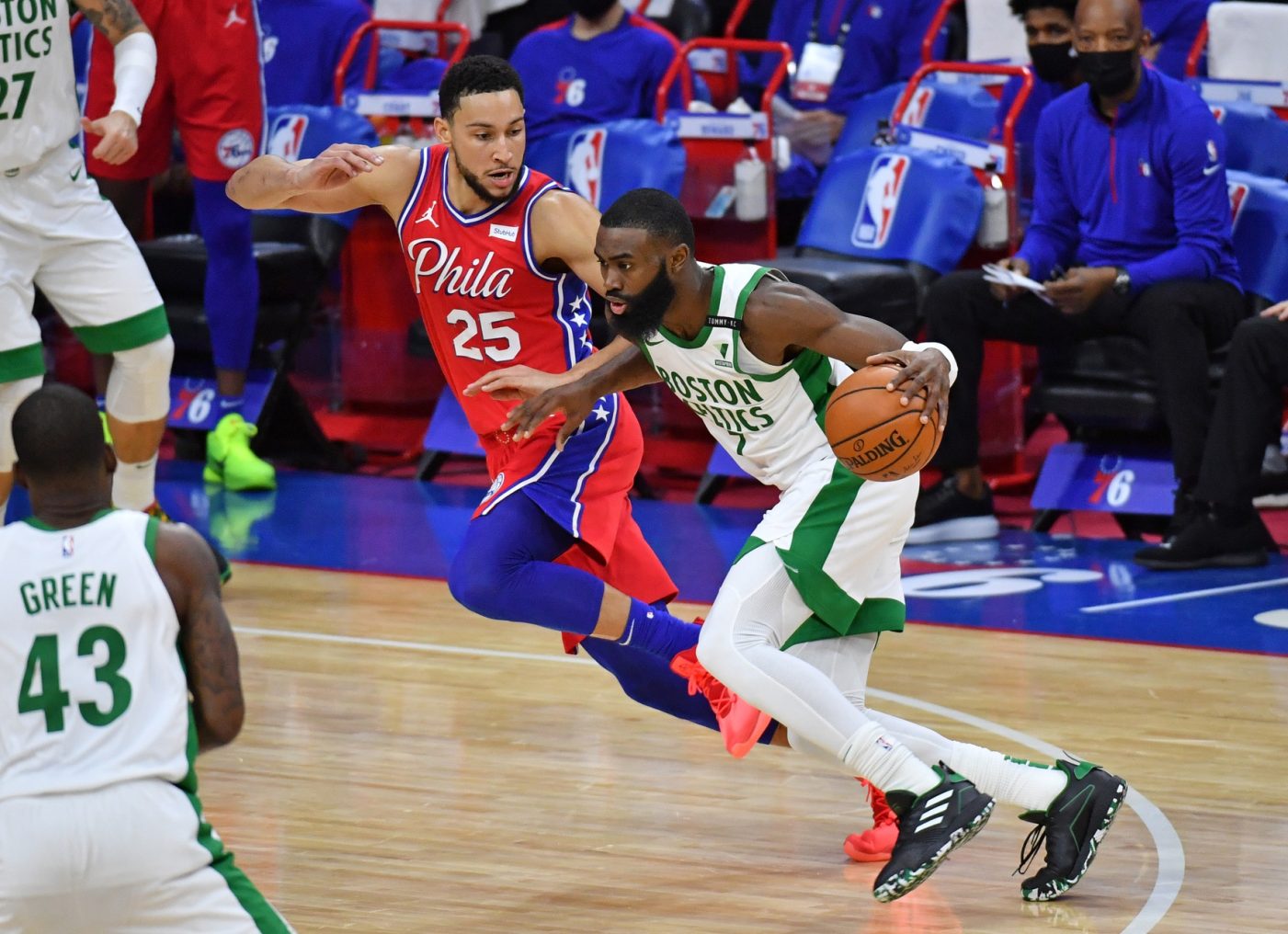 Losing to the Sixers is always the most annoying type of losing. No doubt about it. So it’s even worse when the Celtics do it twice in a damn row! (122-110 this time.) This one couldn’t be blamed on a Sixers-friendly whistle, though — not in any significant way. Despite Jaylen Brown having one of his best NBA performances yet, the team as a whole shot poorly and was hopelessly out-rebounded as Joel Embiid and a vengeful Ben Simmons ran roughshod.

Brown shot 57% to reach 42 points alongside 9 boards, 3 assists, a steal and a block. The Marcus Smart/Kemba Walker backcourt also did well, earning 20-7-3-2 and 19-3-5-3, respectively. Aaaaaand that was kinda it for offense. The entire big-man contingent (Grant Williams, Rob Williams, Tristan Thompson and Daniel Theis) was available, but none of them could make buckets or fight off Philly’s size.

This game is not disappointing!! https://t.co/6VFAfUP6Un

Generally speaking it was a bad time, though at least there were some “game recognize game” vibes:

And the ref shenanigans were back!

On the bright side, Rob Williams was back:

put it in the MFA pic.twitter.com/2PkiHkKABW

The game itself was normalizing, with the Cs just a couple of points behind the Sixers, when shit got miserable in an accidental collision between Brown and Pritchard:

Payton Pritchard's being helped to the locker room with the assistance of two members of Boston's training staff, arms draped over their shoulders.

While Pritch could move his feet in the most literal sense, he couldn’t walk on his own power, and there’s no way that’s good.

Maybe the double big lineup works and they just had the wrong bigs in there? https://t.co/Uls2GK0eVI

Quarter 2⃣ coming up on @NBCSBoston!

Given how ugly that collision was, Payton Pritchard having just a right knee sprain is probably best-case scenario.

Walker's ability to get small, well smaller is amazing. Howard shows a bit wide which creates the gap Walker to split the screen. pic.twitter.com/0vyLpM4LmX

The Cs stayed just barely ahead of the Sixers for the remainder of the half. Herculean effort by Joel Embiid and Tobias Harris kept Philly in striking distance, but Boston served themselves well by baiting Embiid into 3 first-half fouls.

Jaylen Brown’s improvement in his jumper continues to be remarkable. That shot was well contested by Ben Simmons and it didn’t matter. Brown up to 17 points already.

More attrition-based offense in the third quarter. Punch and counterpunch. Boston stayed just in front of Philly, and Weird Celtics Twitter stalwarts were having their fun with it:

What an absurd finish by Kemba. pic.twitter.com/TlltA3JzNp

Embiid is about 5 seconds away from a temper tantrum

when the bully gets bullied 🤝 pic.twitter.com/To0HlICgSs

Pretty big call there. Jaylen with the and-1 that's Embiid's 4th. Then Embiid gets a tech for the delay of game.

It was not Embiid’s night, but the Sixers did manage to retake the lead late in Q3. The Celtics bench was not in the greatest shape, to put it mildly.

Grant and Teague bet on the Sixers

Jaylen put this shit on his back just for the bench to immediately throw it away when they came in. Fuck this

Tristan’s constipated-looking face in the below is my mood:

The beginning of Q4 looked like it could be a definitive wheels-falling-off-the-cart moment. Scapegoats emerged:

Embiid caught Thompson with those fouls in game one, he defo hunts that call

It’s hard to really blame one dude when the truth is that Jaylen Brown was all that kept them alive in the first half of Q4. Also Tristan did have this slick block:

Tristan got some hang time on that block pic.twitter.com/yOr80kxds8

It was too late, though, even as Brown raged till the bitter end: Simmons got hot on offense at just the right time; that plus some sloppy defense and ball-handling (and Sixers trips to the charity stripe) spelled Celtics doom.