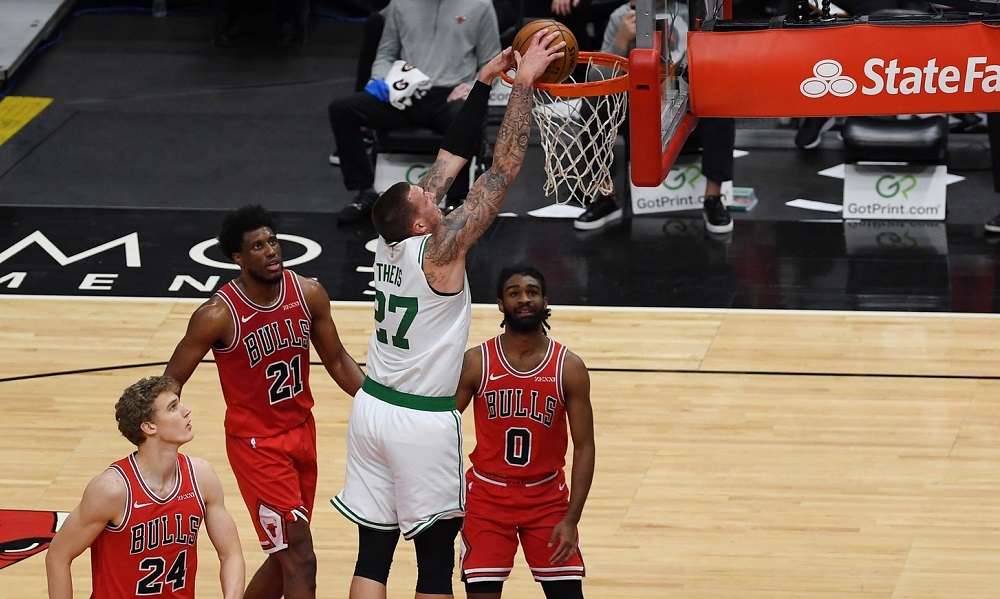 One night after totally dominating the Cavs, the Celtics had their way with Chicago, using an early 11-0 run to take the lead for good. The Bulls helped out by making just 4 of 10 free throws in the game. According to statmuse.com, that was tied for the second-fewest FTs ever made against the Cs.

Now that we have that random but interesting (to me) stat out of the way, here are five more mostly rational thoughts about the Celtics’ 119-103 win in the Windy City.

Let us take a minute to appreciate Daniel Theis, the Celtic who is the most underappreciated by many fans and casual media observers. Whenever they discuss how to improve the Celtics roster, “trading for a big man” is the common answer, with Theis being shown the door.

Theis has answered the criticism with a recent hot streak. Last night, he went 8 of 12 from the field for 19 points, plus 3 steals and 3 blocks. On Sunday versus Cleveland, Theis scored 17 (with 8 of 8 FTs) and added 2 blocks, outplaying Andre Drummond. Last week against Philadelphia, he shot 10 of 11 to score 23 points with 10 rebounds, which somewhat offset the damage that Joel Embiid did to Boston’s defense.

Did you know that Theis is the all-time Celtics leader in offensive rating at 126.3? Not just the leader of the current team, but the leader for all 75 seasons of the franchise. OK, Theis can’t guard Embiid, but no one else can either. However, Theis is solid on both ends of the court, can spread the floor with his acceptable shooting from the arc (career 34.3%), and is cap-friendly ($5 million expiring contract).

Theis looked better than any Chicago big last night, and that’s really all Boston needs from him.

Seal play: legal or not?

One of the things Theis has done best is the seal play, in which he sets a pick, rolls to the hoop, and uses his backside to seal off the man who switches onto him. This creates a lane to a layup for the dribbler.

The Celtics used this maneuver often during the past year, but on Christmas against the Nets they were twice called for phantom fouls on the screener. By my observation, the Cs have barely run the seal play since then, but they tried it last night with Grant. Once again, a foul was whistled.

Grant did move back into the defender, so maybe it wasn’t a bad call, but it begs the question: Has the NBA decided the seal play is illegal? That’s a question someone might want to ask Brad Stevens.

Brad gave some love to the young guys last night.

Carsen Edwards, Javonte Green, and Robert Williams were the first three subs in

It’s great to see Carsen Edwards getting a chance and making some plays. He’s so far been a G-League talent not ready for NBA competition, but in Sunday’s game versus the Cavs he shot 7 of 12 to tie his career high of 18 points. (Yeah, 13 of those points came in the extended garbage time of the 4th quarter, but he still had to make the shots).

Brad must’ve been happy because against Chicago he gave Edwards 12 minutes in the rotation. The second-year man responded with 6 points, including this highlight:

Edwards seems to always be short on confidence, so here’s hoping these recent positive developments make a difference in his confidence and production.

When you’re a rookie who was drafted as a knockdown shooter, then it’s a bad look when your shots are clanging. Aaron Nesmith was in that bind, but lately he’s shown some encouraging signs – and not just on offense.

Aaron Nesmith is finding his groove shooting, but I have to commend him for a lot better defensive effort, especially in that 3rd Q. The hustle play was one thing, but he had well-timed switches & strong box-outs. He's making progress

Aaron Nesmith is 6-10 from 3 in his last two games. Shooting 3-5 (60%) against both the Cavs and Bulls. He's been much better defensively as well.

I'm sure Aaron Nesmith is happy to be finding a groove with his shot, but it's his effort on defense that may go an even longer way toward the coaches trusting him with more important minutes… Though no doubt Brad also likes seeing those no-hesitation 3's find the strings.

This is how you earn minutes as a rookie in a Brad Stevens system. Great hustle by Nesmith here pic.twitter.com/ov3WTUFGCv

I’m rooting hard for this kid, especially because the Celtics haven’t had a deadly 3-point ace coming off the bench since Eddie House. The man they call Threesmith could be the next.

The Bulls did not use recorded crowd sounds at their home game versus the Cs, which is different from most arenas during the pandemic. Reaction on Twitter was mixed.

If you want to know how lack of energy in an empty arena feels, watch Celtics-Bulls with no crowd noise.

Love how there’s no fake crowd noise on this C’s broadcast.

I had no problem with it. After the first quarter, did anyone really notice?