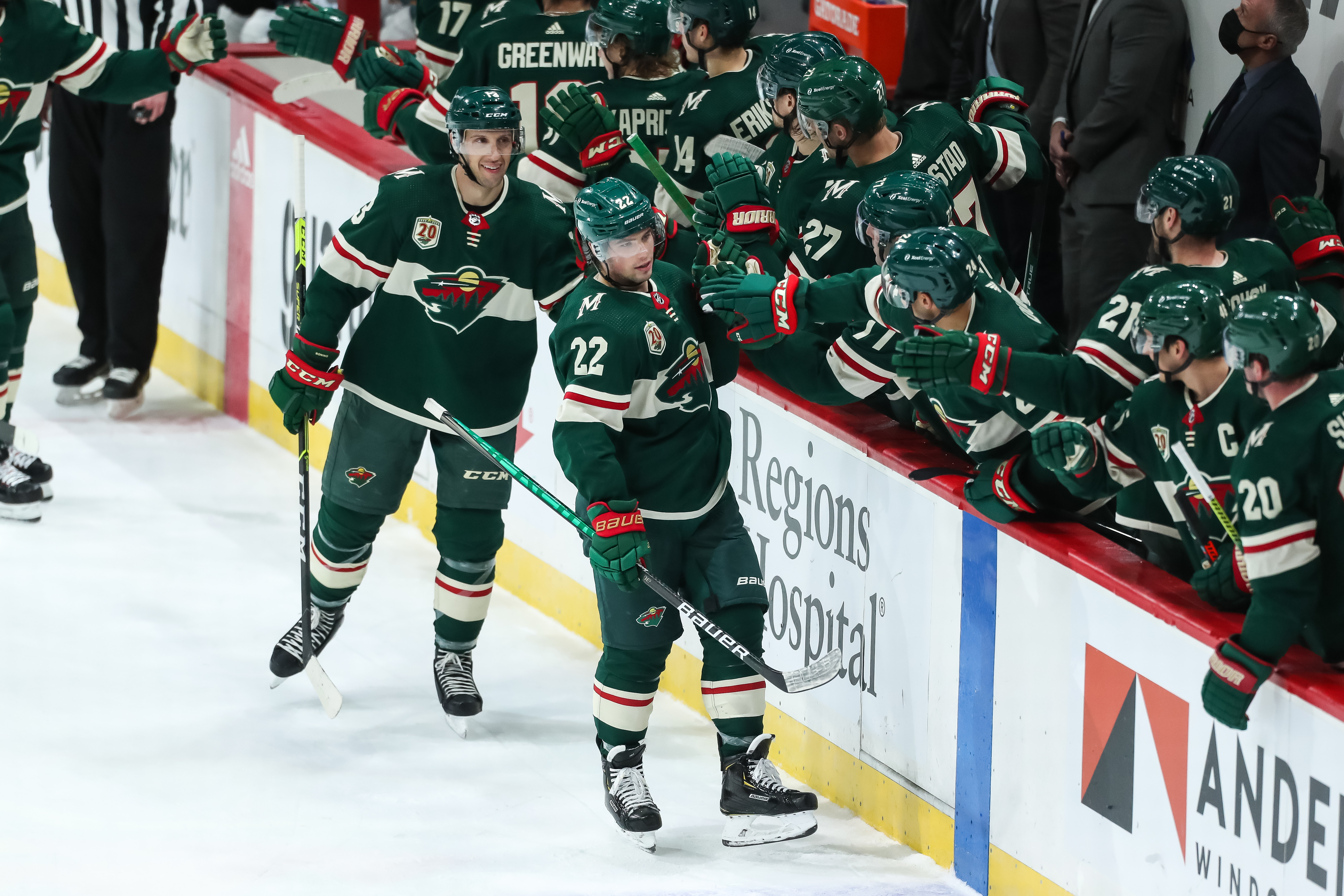 A while ago, I learned from a Hall of Fame Football coach that when you are not playing well you simplify what you’re doing and get back to basics.  That was evident on Thursday night as the Wild started the game with energy right from the puck drop as Marcus Foligno squared off with the Kings’ Kurtis MacDermid.  It wasn’t much of a fight, but it got the team’s intensity up and for the first 10 minutes the Wild were playing with level of pace we have not seen all season.  Not only were they playing fast, but they clearly had simplified their approach.

After a failed 4-on-1 where they failed to register a shot, the same line tracked down the puck where Nick Bonino set up Marcus Johansson who appeared to be reborn this evening.  Minnesota would add to its lead with 2 more goals as Kevin Fiala scored on a breakaway and Johansson set up Kirill Kaprizov for his 2nd tally of the year off the rush.  The Wild were not just playing fast, but they were playing furious as Minnesota players were taking their chances to deliver big hits in open ice as Matthew Dumba lit up Lias Andersson who was caught with his head down.  Kaprizov drew cheers from the Wild bench as he leveled Austin Wagner with a nice open ice check.

Los Angeles’ Matt Roy was sent face first into the boards on an ugly hit from behind by Kevin Fiala that resulted in a game misconduct and gave the Kings over four minutes of power play time.  Predictably, the long penalty allowed Los Angeles to scratch and claw their way back into the game but the Wild would add another two goals from Nick Bjugstad and Joel Eriksson Ek to give themselves back their 3-goal cushion they had after the 1st period.

A scary moment would take place when Dumba uncorked a slap shot in the 3rd period that struck the Kings’ Sean Walker in the face who was instantly in distress as he had a gusher of a wound pouring out blood onto the ice and he was moved quickly to the bench and to the locker room for repairs.  The two clubs would have more skirmishes and little cheap shots through the last 10 minutes of the game.  Minnesota would hold on for a 5-3 win and another series split in their pocket. 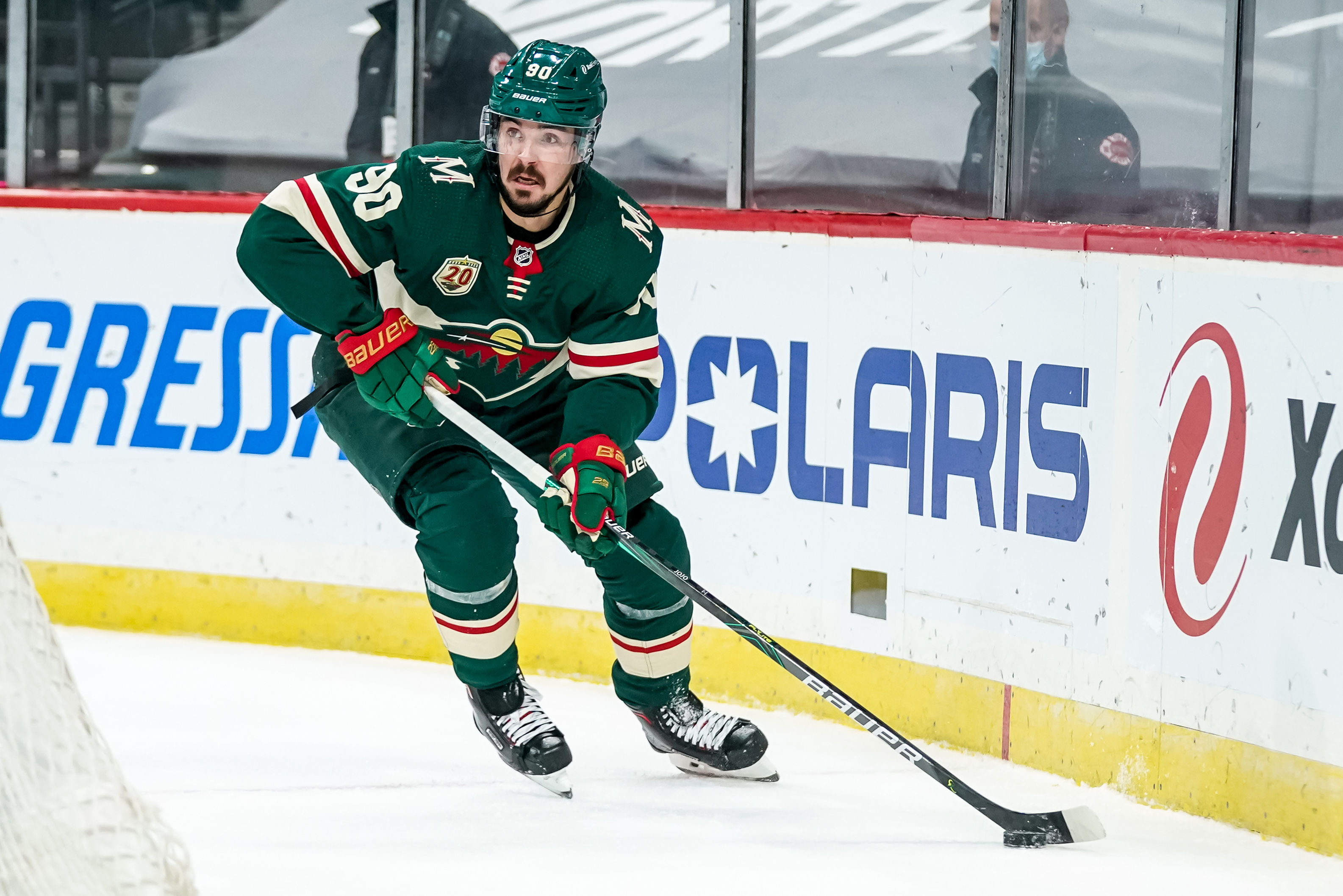 A week or so ago, much was made of an ISO-cam view of then Columbus Blue Jackets’ center Pierre-Luc DuBois who had kind of an aimless shift which was seen by many a classic example of why he had soured with the team’s coaching staff.  A few days later he was traded to the Winnipeg Jets for unhappy forwards Patrik Laine and Jack Roslovich.

I wonder what an ISO-cam view of the Wild’s Marcus Johansson reveal?  I’ve tried to just focus on him during games, and what I see looks remarkably similar.  A player lacking focus, initiative and lots of watching and reaching and not much in the way of hustle. And sorry folks, I can’t think of many teams that want a $4.5 million winger that appears to be on his way to another single-digit goal season.

I get it, Johansson has moved around the league quite a bit the last 3 seasons.  However, does any team’s system just say glide around the rink and just reach when a puck is near you?  He’s been with the Wild nearly a month now.  He hasn’t been scratched and Dean Evason has been using him on the 2nd line virtually the whole season thus far.  Evason tried to spark a stagnant 2nd line by switching Kevin Fiala for Kirill Kaprizov.  It didn’t work.

Neither Johansson or Nick Bonino seemed to have any kind of chemistry with the young Russian who even set the two up with great scoring chances they were unprepared to accept the passes for.  Johansson has two goals on the season and is a -2 with 18 shots on goal with a little over 16 minutes of ice time per game.  Bonino isn’t much better 1 goal on 15 shots and a -4 in just under 18 minutes of ice time, his one redeeming quality is the fact he’s the best player on the team in faceoffs at over 57%.  Still, both players have mostly been an abyss offensively.  It wasn’t any better when Fiala was on that line.

Barring a trade, its tough to see how the team can fix this issue as they just simply have to hope some of these passengers decide to step up and help the team push to create offense.  So on Thursday night, Johansson played with the kind of speed and purpose we haven’t seen all year.  He registered a goal and an assist in the Wild’s but was he holding back before?  The winger exhibited speed and creativity that we didn’t see through training camp scrimmages or the first 7 games of the season.  While it is nice to see the speed and skill emerge, its also frustrating as though it appears he was sandbagging it.  Time will tell us if tonight’s outburst was the new norm or an aberration.

Marco Rossi knew he had nothing more to prove in the Ontario Hockey League.  After scoring 120 points last year with the Ottawa 67’s and being named the CHL’s Player of the Year for 2020 meant he had nothing left to prove at that level.  Since he would either have to make the Minnesota Wild roster or return back to junior the Feldkirch, Austria-native made plans to play in Switzerland’s National League for ZSC Zurich.  He even managed to register an assist in his first game.  But he’d be halted by a bout with Covid-19 and by the time he was feeling better he had to report for camp with Team Austria for their entry in the IIHF World Junior (U20) Championships in Edmonton.  Team Austria was easily the least talented squad from top to bottom and Rossi looked a bit overwhelmed as he spent most of his time trying to help out defensively as his nation went winless in the tournament.

Rossi himself had shots on goal, but no points to show for his effort.  No big deal, NHL training camps were about to begin so he traveled to St. Paul to quarantine so he could join the team early in the season.  Or that was at least the plan.  By January 10th, it was reported that Rossi would be out indefinitely with an upper body injury.  While most have avoided speculating what that could mean, it seems rather ominous that over a month has passed since that initial prognosis and there is still no word whatsoever as to what’s ailing him.

If it was the fact he simply had Covid-19 again why not share that information.  But the fact they’re saying nothing has made me wonder if its something more akin to an injury.  Team Austria got pummeled on the scoreboard and literally in most of the games they played and Rossi was there in the middle of it.  I noticed during the tournament that he seemed to hesitate to shoot the puck.  On a team desperate for goals (they only had one goal the entire tournament) one would think Rossi would’ve been encouraged to shoot as often as possible.  But he didn’t, instead opting to try to set up teammates.  While I realize he’s more of a playmaker than a sniper, he’s still not averse to pulling the trigger yet he seemed to fade more and more as the tournament went on.

Was that and the fact he wasn’t taking the opportunities to shoot that he was playing hurt?  It would appear to be a likely possibility.  Adding insult to possible injury, Rossi is missing out on what would likely be golden opportunity as the team is obviously desperate for a Top 6 center option.  Brave the Wild‘s Joey Awaijane speculated on his most recent podcast that he may have broken a bone but either way all fans can do is wait.

What do you think?  Is there a line combination the Wild should try?  Tell us on Twitter @CreaseAndAssist or in the comment section below!

RW – Nick Swaney (Minnesota-Duluth, NCHC) ~ The senior winger is having another strong season offensively for the Bulldogs as he had a goal on 3 shots in UMD’s 5-1 win over Western Michigan on Saturday night.  The two-time national champion added two more helpers on Sunday as the Bulldogs swept the Broncos with a 4-1 win.  Swaney, the leading scorer for UMD has 6 goals, 18 points, 6 PIM’s and is +5 in 15 games.

G – Filip Lindberg (UMass, H-East) ~ The Espoo, Finland-native made his return to the Minutemen lineup this weekend where he showed little rust as he made 24 saves in a 1-1 tie against Providence on Saturday.  Lindberg has the bizzaro numbers of a 0-1-3 record, 1.91 goals against average and a .929% save percentage with one shutout this season.

C – Alexander Khovanov (Ak Bars, VHL) ~ After struggling to stick with his KHL team, he was relegated to the VHL (Russian Junior) where he had 2 assists in Ak Bars’ 6-2 victory.  Khovanov has 7 goals, 20 points in 25 games this season.