RECAP 8: It can't get worse than this, right? Bruins beat depleted Pens 4-1

RECAP 8: It can't get worse than this, right? Bruins beat depleted Pens 4-1 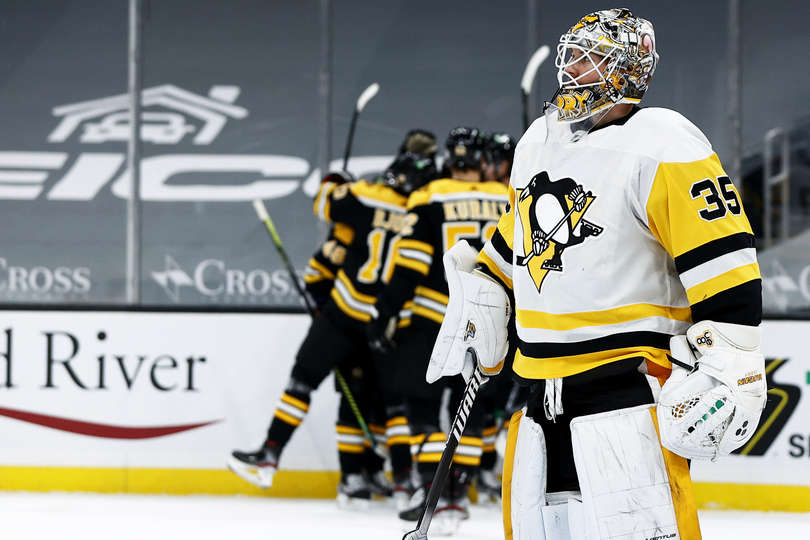 It’s hard to expect much from the Penguins right now. Consider the following:

While the Penguins’ record currently indicates they’ve been okay, that really isn’t the case. They won two of their games in a shootout which very easily could’ve been losses. They have just one regulation win through eight games. They have yet to put together a complete 60-minute performance without some monumental breakdown or screw up.

With their defense as depleted as it is, the Penguins will probably be holding on for dear life for the next several weeks as they hope reinforcements come sooner than later.

The Bruins topped the Penguins 4-1 Thursday night in a low-event, overall boring game. Shots on goal favored Boston 20 – 17 while the Penguins had a 42 – 34 edge in shot attempts. Scoring chances were 18 – 15 for Boston, and they also had a meager 1.2 – 0.88 edge in expected goals, per Evolving Hockey.

The Penguins settled for lousy shot attempts all night, taking just one shot attempt that was anywhere in the vicinity of what might be considered high-danger.

The Bruins didn’t have a ton of great offense either, but they almost exclusively shot from the slot and scored all of their goals from that area.

Kevin Czuczman drew into the lineup for his first NHL game since 2014.

Tristan Jarry Made his fourth consecutive start in goal.

Welcome back to the NHL, Czuczman! In an attempt to clear the puck when defending a cross-crease pass, he deflected the puck right to the heart of the slot where Chris Wagner made no mistake and beat Jarry for the first goal of the game.

Did you Ceci that tally?!

Ceci gets his first goal as a member of the Penguins.

Rust and Blueger pick up the helpers. pic.twitter.com/CjXxMe1vfh

In his finest moment as a Penguin, Cody Ceci made an excellent play along the boards to keep the puck in the offensive zone. After corralling the loose puck, Ceci took the open ice that was given to him and walked to the slot before ripping a shot past Halak to tie the game.

Ceci had one of his best games in black and gold. He paced all Penguins skaters with 22:22 time on ice at 5v5. In that 22:22, the Penguins took 19 shot attempts to Boston’s 11, and controlled 54.2% of the expected goals, per Natural Stat Trick.

The Penguins absolutely fell apart in the defensive zone with just over a minute to go in the first period. There were so many awful things the Penguins did on this goal it’s not even worth going over.

Regardless, as soon as you saw the puck trickle past Jarry, you knew deep down the Penguins weren’t coming back in this one.

The Penguins got caught puck-watching a little less than halfway through the game, leaving Patrice Bergeron to do as he pleased right in front of the Penguins’ net. He slipped a backhander past the pad of Jarry, who never gave himself a chance to properly get in position for the shot.

The Bruins put the game out of reach early in the third on the power play. Thanks to some nifty passing, they found Bergeron for a one-timer from the top of the right-circle who went high-glove on Jarry.

Jarry looked unprepared for the shot and was playing far too deep in his crease to have a reasonable chance at stopping the Bergeron blast.

The Penguins failed to score, or even generate a quality chance the remainder of the game.

The Pens are back in action Saturday night when they visit the New York Rangers.

All data from Natural Stat Trick and Evolving Hockey